HUSKY NORDEN PROJECT: BEHIND THE BUILD 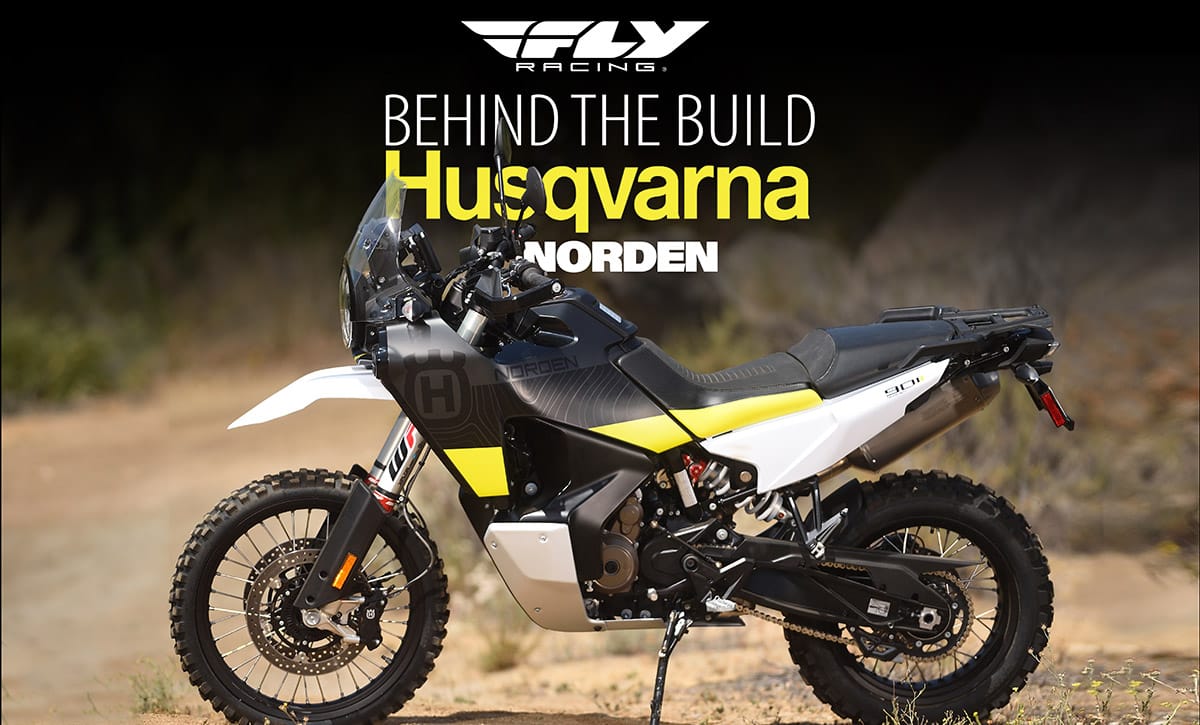 It’s surprising how quickly the motorcycle world warmed up to the idea of a Husqvarna adventure bike. The Husky Norden 901 has been available for about six months, and already it has secured a prestigious place in the adventure bike community. There are Norden clubs, Norden rides and Norden forums. It seems like the concept of the long adventure ride matched up perfectly with Husqvarna’s presumed demographic of older riders with a serious off-road background.

The Norden is, of course, based on the KTM 890 Adventure. It has the same trellis frame and the same 889cc motor. But, of all the platforms that the two brands share, the Norden and the KTM 890 have the most diverse personalities. If you didn’t know that they came out of the same factory, you might never guess that they share so many parts. That’s because all the parts that interface between the rider and the bike look different, feel different and perform differently. The Norden is designed to be more comfortable and more travel-oriented. To confuse matters, there is only one Norden but three different KTM 890s. There’s the KTM 890 base model and the off-road-oriented 890 Adventure R, then there’s a limited-edition KTM 890 Rally with full-off-road suspension and upgrades. So, is it possible to have the off-road performance of the dirtier KTM models without surrendering the comfort of the Norden? That’s what this particular project is all about.

We first got to ride the Norden at the world introduction in the Azores of Portugal. That was the perfect place for a bike like this; the riding was great and the weather was terrible. It rained hard and long, and the sketchy, narrow roads were covered in slick, wet moss. The Norden’s frame-mount fairing provided a perfect place to hide from the deluge, and the portfolio of riding aides made the motor’s 105-horsepower output more manageable. A standard Norden has three riding modes: Street, Rain and Off-Road. Each mode alters traction control, anti-lock braking and throttle response according to a precooked menu. A software option that comes separately gives you Explore mode, which allows you to deviate from the specified setting and come up with your own recipe. The most useful of the electronic controls is the ability to bump traction control up or down on the fly. That’s absolutely mandatory on a ride that goes from slick pavement to gravel roads.

The most important factor that you can’t adjust is suspension. Where BMW, Yamaha and Honda have been developing user-defined suspension settings, the Husqvarna Norden is equipped with WP Apex suspension. That’s the base-model street fork and shock in the WP line. Apex suspension comes on the base-model KTM 890, but the R model comes with Xplor suspension, which is similar to what comes on the real dirt bikes. The 890 Rally has WP’s flagship components—the Xplor Pro line. That bike also has an Akrapovic exhaust system and a number of other upgrades. The bad news is that it has a $20,000 price tag and a waiting list. Only 200 are imported to the U.S.

Even though there’s no Norden Rally, Husqvarna does allow you to buy all the parts to make your own. The WP Xplor Pro fork uses Cone Valve technology and is much beefier with 270mm of travel. That compares to 220mm on the stock Apex fork and 240 on the KTM 890 Adventure R. The Xplor Pro shock is also a considerable upgrade, with fully adjustable high- and low-speed damping, as well as turn-screw preload adjustment. That gives the Norden 270mm travel in the rear as well. After the suspension upgrade, the seat height is upped to 35 inches—2 inches more than stock. That means you have to extend the kickstand or the bike will fall over. If you don’t want to cut and weld, there are aftermarket kickstands available. The price for the WP Xplor Pro suspension is steep—$3600 for the fork and $2200 for the shock. That alone pushes the Norden over the price of the KTM Rally, but it’s worth pointing out that you still own your original shock and fork, which retain some value. And, there’s no waiting list.

We also installed the Explore software upgrade ($190) and the Akrapovic exhaust ($1300). Finally, the bike desperately needs rubber. Stock, it comes with Pirelli Scorpion Rally tires, which are 90 percent street-oriented. We installed a Dunlop Rally Raid 908RR in the rear and a 606 in front.

Sometimes we overshoot the goal. That’s the case here. What we wanted was a more dirt-capable Norden, but what we got was an elite race bike. The Xplor Pro suspension upgrade makes an incredible difference in off-road performance to the point where we would legitimately consider entering the bike in a National Hare & Hound. We know that Quinn Cody raced that series in 2021 on a KTM 890 Rally, but that’s Quinn Cody. We figured he’s just inhuman. Now, after riding the Super Norden off-road, we get it. To start off, there’s a noticeable improvement on the washboard ripple that you typically encounter on dirt roads. And, it only gets better from there. Before, you simply wouldn’t consider riding the Norden across a typical set of desert whoops. You would go around them somehow or just put it in first gear and idle to the other side. Now, you want to grab gears. The faster you go, the better the suspension works. It’s entirely possible that you’ll go much faster than you want without trying.

There’s a price, though. The seat height is borderline unmanageable. Even though 35 inches sounds like a typical dirt bike, the wide seat uses up some valuable inseam. Even 6-foot-tall riders are on their tippy toes. That’s with the seat in its low position. Tall riders will still want the seat moved up in order to make the seat-to-peg distance more roomy. That makes it so most riders will need to find a low spot just to get on board. Some riders resort to the Roy Rogers flying mount and dismount technique, but that seems perilous at best.

Still, we’ve never ridden a full-size adventure bike that made us want to ride this fast across gnarly terrain. When you combine that with the fact that it’s perfectly comfortable crossing states and riding all day, you have a bike that opens doors to new possibilities. That’s what adventure riding should be all about.