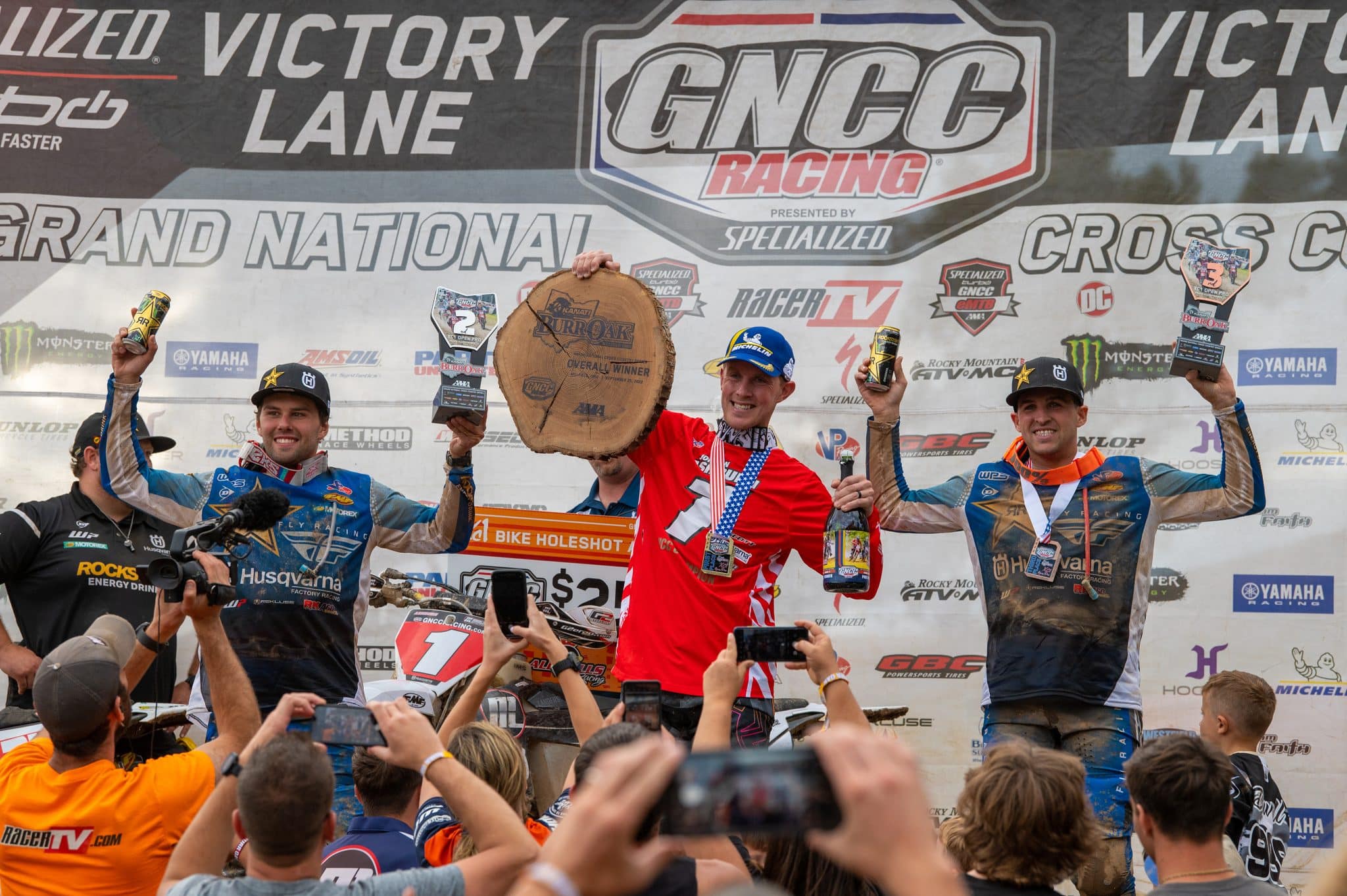 The Grand National Cross Country (GNCC) Series presented by Specialized, an AMA National Championship, concluded its eleventh round of racing on Sunday, September 25 with the Kanati Tires Burr Oak GNCC in Millfield, Ohio. A morning rain shower made for somewhat slick conditions, which soon tacked up into almost perfect conditions for the afternoon pro race.

Magna1 Motorsports/Husqvarna’s Jordan Ashburn jumped off the line to grab the $250 All Balls Racing XC1 Open Pro Holeshot Award and would continue first into the woods. Ashburn would lead majority of the race, with Rockstar Energy Husqvarna Factory Racing’s Craig DeLong working his way through the pack to make a pass on Ashburn as with two laps remaining.

Ashburn would put his head down during the last lap and make the pass back on DeLong to take his second win of the season. This win would also secure him the 2022 GNCC Overall National Championship. DeLong would come through to take second on the day and move into second in the championship standings.

Rockstar Energy Husqvarna Factory Racing’s Thad Duvall had to work his way up through from a sixth place start to earn his second-straight third place finish and podium finish of the season. Coastal GASGAS Factory Racing’s Ricky Russell had a good start to the day as he ran second on the opening lap, but a crash on lap two would put him back to seventh. Russell would continue to push and worked his way up to fourth overall on the day.

Coming through fifth was FMF/KTM Factory Racing’s Joshua Toth. After a decent start to the day Toth would battle up front for majority of the race, even after a mid-race encounter with another rider left him back in the pack for one lap. Toth regained his composure and made his way back up to a top five finish on the day.

Rev Motorsports/GASGAS Racing’s Grant Baylor started his day out in third on the opening lap but would find himself finishing the day out sixth overall. AmPro Yamaha’s Steward Baylor would ultimately finish seventh in the XC1 class after having to return to his pits early.

In the XC2 250 Pro class it was once again Coastal GASGAS Factory Racing’s Jonathan Girroir earning his third-straight win. Tely Energy Racing/KTM’s Liam Draper started out the day ninth, but he would put his head down and push to move into a podium position on lap two. Draper would then make the move to second and hold onto that until the checkered flag flew. Coming to earn his first podium finish of the season was Liqui Moly Beta Racing’s Jonathan Johnson. As he came through on the opening lap Johnson was back in fifth, but he would steadily make his way into third and hold that for the remainder of the race.

In the FMF XC3 125 Pro-Am class Magna1 Motorsports/Husqvarna’s Brody Johnson earned his eighth win of the season and has taken over the points lead with two rounds of racing remaining. Liqui Moly Beta Racing’s Jason Lipscomb held onto that second place position for the duration of the race, while Solid Performance/GASGAS/Fly Racing’s Max Fernandez worked his way back up to third after a sixth place start to his day.

AmPro Yamaha’s Rachael Archer earned her fifth WXC class win of the season, while also taking the points lead over the rest of the competition. Rockstar Husqvarna/Surge Off-Road Coaching Team’s Tayla Jones came back to earn second in the race after suffering a DNF at the previous round of racing. Jones currently sits third in the points standings. Trail Jesters KTM Racing’s Korie Steede battled at the front of the pack for the entire race, but she would be unable to make the pass back on Jones. She would come through third in WXC, while now sitting seven points behind Archer in the championship standings.

In the youth race it was Nick DeFeo coming through to earn his 11th overall and YXc1 Super Mini Sr. class win of the season. DeFeo was also crowned the Youth Motorcycle Overall Champion as he has been undefeated this season. Sawyer Carratura finished second overall and in the YXC1 class while Ryan Amancio came from the second row in YXC2 Super Mini Jr. class to earn third overall on the day and earn his class win