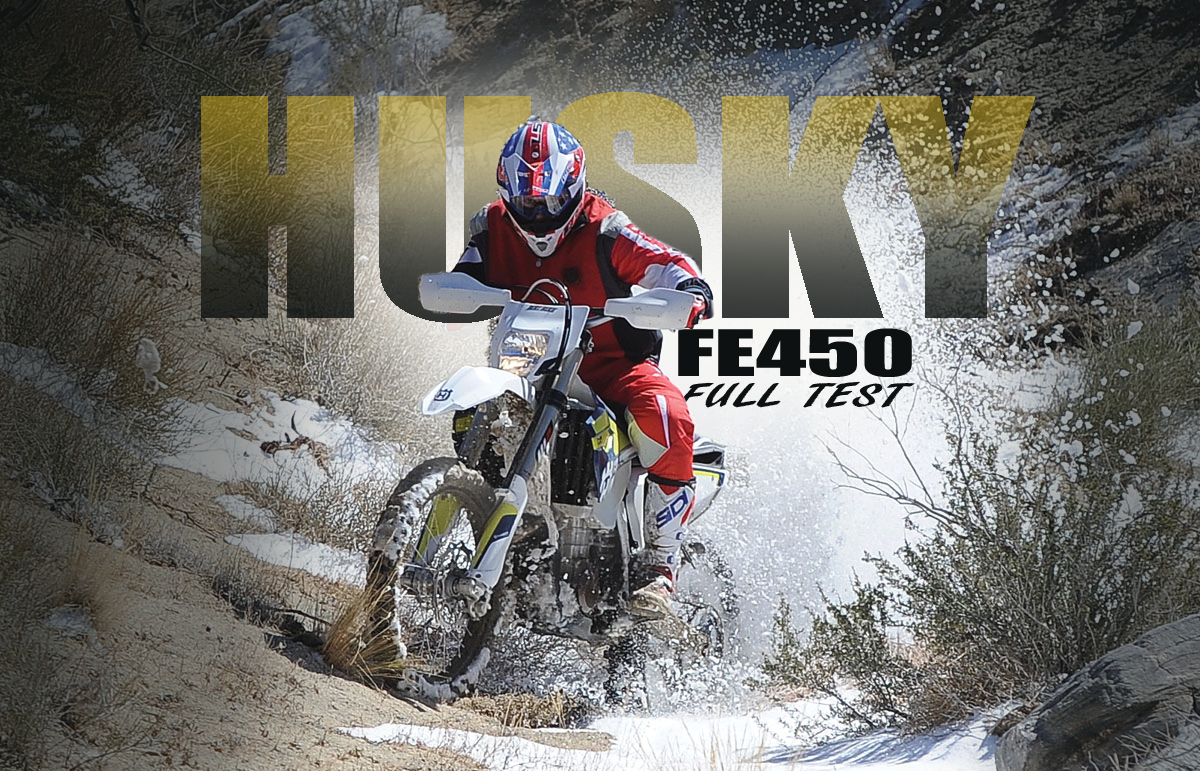 Last year Husky’s off-road four-stroke line consisted of an FE250/350 and 501. All proved to be efficient and effective machines designed to embrace and attack the world of snot, rocks, trees and sewage. But for the enthusiast who really wants a big bore, the 501 is a bit much for tight work and, to be honest, the Husky’s cousin, the KTM 450XC-W, is fit with an engine that is perhaps the ultimate off-road powerplant. It’s a myriad of smooth, tractable and powerful mated to perfect mapping specs, no flame-out and versatility that far outweighs the hard-hitting and overly explosive 450XC-F volcano or the throbbing mass of the 501. We asked ourselves, so why didn’t Husky get a version of the powerplant and get to mate it to their chassis and suspension spec? 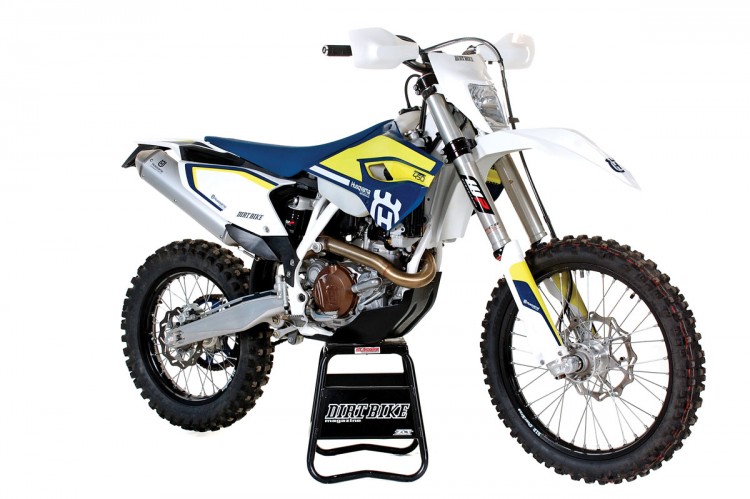 THE MO’-MAKER
The 2016 Husqvarna FE450 is fit with the 450 OR engine, a unit that is calmer than the MX version by virtue of cylinder design, head flow, EFI throttle body size and mapping, exhaust, internal flywheel weighting and a wide-ratio six-speed gearbox. The SOHC engine at 449.3cc is a compact design and light. A single-overhead camshaft engages two titanium intake valves and two steel exhaust valves. The valve train is low friction for improved performance as well as low engine braking action. The Engine Management System (gets the gas to the engine!) is Keihin, a 42mm throttle body that targets smooth and very clean power. An oil-cooled 196-watt alternator provides sufficient energy for the fuel injection, lighting and other electrical loads. The Husky has a map-select switch on the handlebar that allows the rider to select different engine characteristics. The clutch basket is a one-piece design, and the DDS clutch (damped diaphragm steel) is machined from solid high-tensile steel in one solid part together with the primary drive gear. This process targets reliability, and by using thin steel linings, it makes for a narrow engine width. The diaphragm spring makes it possible to implement an additional rubber damping system inside the clutch hub, again targeting reliability for the transmission. It’s mated to the hydraulic clutch mechanism by Magura and in cahoots with the diaphragm spring makes for a light and positive modulation of the clutch. Finally, the Husky is equipped with electric-start and a kickstarter if that should fail. 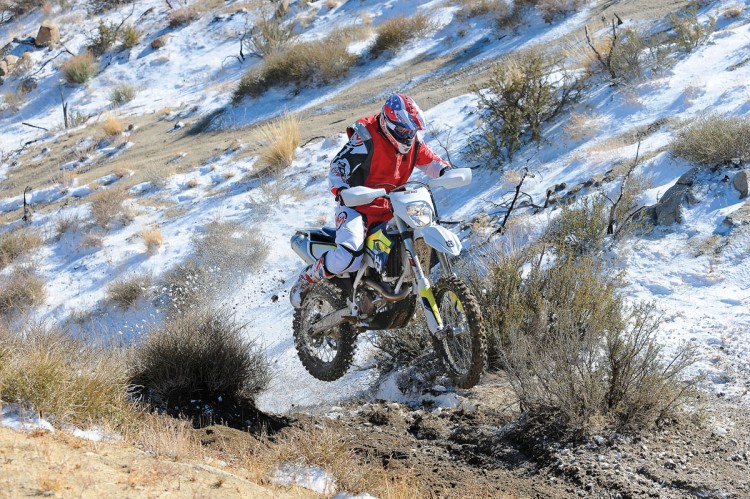 CHASSIS/SUSPENSION/STUFF
The Husky uses a chromoly frame, rear suspension linkage on all of their machines and a polyamide (composite) rear subframe. The goals with this focus are increased feel through the frame (the steel design is far more polished to accept hits and blows and actually absorb the loads as opposed to aluminum, where flex points have to be designed into the frame to give it some feel under duress) and the subframe, too, is more forgiving via longitudinal flex. The front end has been reworked via a lighter 22mm front axle (down from 26 mm) and a new 22mm offset CNC triple clamp. The smaller axle repositions the fork, resulting in less offset and increased trail, while the triple clamp’s new offset decreases trail, balancing out the front of the bike. The CNC-machined clamps, known for their strength, have been revised (adding in flex) and continue to have four different handlebar positions.
In the suspension department WP dampers grace both ends, a 4CS fork up front, and a piggyback dual compression and more compact shock in the backyard. The 4CS fork has been the subject of controversy, but mainly in the MX world. In off-road, the design hasn’t been as offensively harsh, but unique to Husqvarna, they set their own spring rates and damping numbers, which all come out of Europe. Last year our off-road thoughts were that the front end was a little divey, got hacky under speed and changing the compression seemed to only help the high-speed hits. This year the machine has been fit with a new spec designed to address all of the points that we had issues with. The shock, too, has revised internal settings, all targeted towards increasing traction and reducing the impact felt through the chassis and back into the rider.
Other news with the Husky is a new more grippy seat cover (let’s hope so!), a tougher SuperSprox rear sprocket, the return of a strong O-ring chain, machined hubs, D.I.D rims, new GFK rotors, Brembo brakes, Magura controls, Neken bulge bars, along with a WP built exhaust that is stainless at the header and mid-pipe and aluminum at the can. It is super quiet!
The FE450 comes equipped as a green-sticker-legal machine; it has lights, a resettable odometer, a 2.4-gallon tank, handguards and a lightweight plastic skid plate. 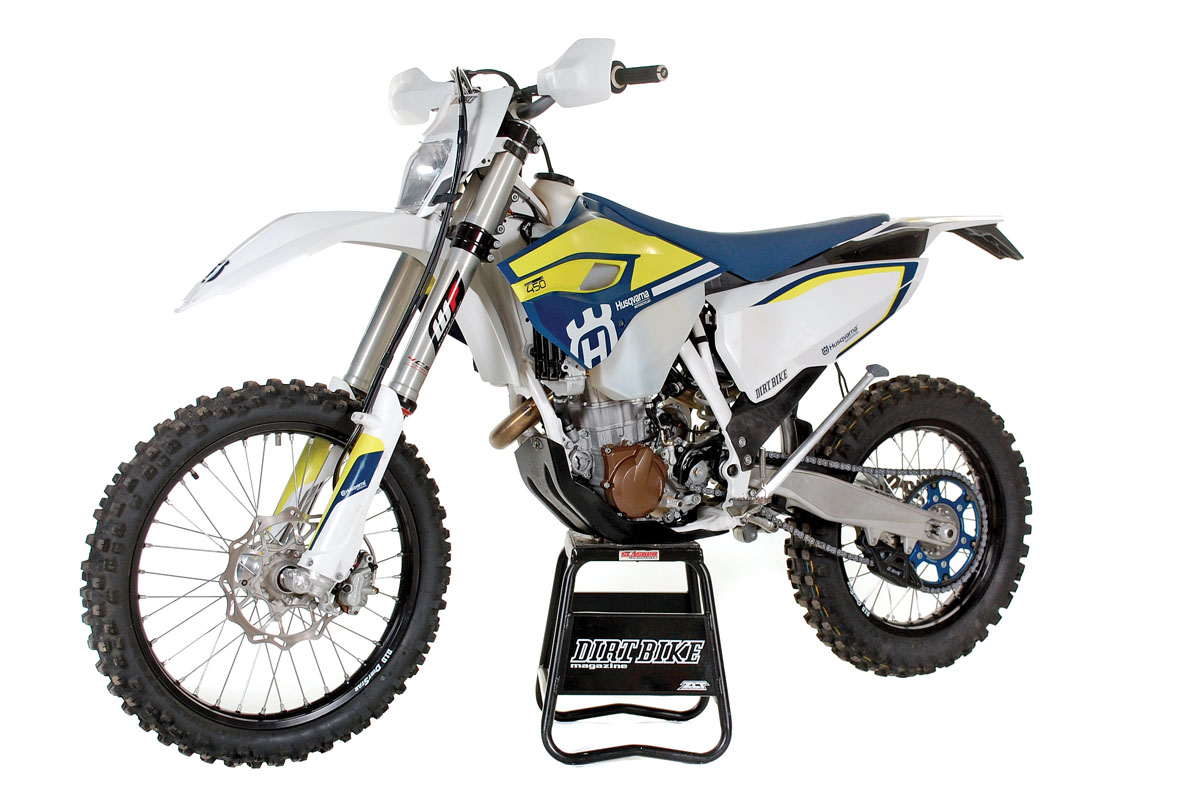 THE HIT PARADE
Perhaps the biggest yahoo factor on the FE450 is the power! It is pure magic. Starting is a button-poke, warm-up is negligible, the clutch is smooth and light and the exhaust note is soft enough to not wake up your dog slouched in the laundry room. And, it makes immediate gratification—a smooth flow of very talented boost flows right out of the hole. There is no hurl and lurch throb, or no big lag followed by a hit that’ll peel your eyeballs into bleeding onions. We’re talking a stifled roar, potent and silky with no hitches; gurgles or lean spots that always make a machine lean towards flame-outs. This baby moves out, feeling light and nearly vibration-less, but having enough flywheel effect mated to near-perfect EFI numbers that keep the power seamless and smooth.
The clutch pull is ideal, soft and light with good feel. The shifting is notchy and sometimes tough to find neutral, but it did seem to loosen up as we got more time on it. Concerning the gearbox, the six-speeder is uniquely off-road with a low first, a fairly low second and a taller third gear. Working between second and third is your tight terrain home; first is only for starting and the ugliest of bad stuff. In the desert, where faster terrain is the norm, the spacing was again quite well-suited, as third and fourth handled the tighter zones and an overdrive sixth gear lets the machine lug easily at the 55–60-mph point.
In the handling arena, the Husky’s WP dampers get good marks for their ability to track and handle ugly hack, stones and logs with a decent feel. Both ends are plush enough, yet stay up in the stroke just enough to take in a G-out or big rut without too much hassle. At speed the machine is pretty cushy, but does dive a bit too much and rides low in the stroke when the dirt is good and speeds are up. We nearly bottomed out the compression adjuster on the fork in an attempt to keep the silverware from dipping too low. This helped, but it did make the front end harsh in boulders and smaller stones. The bottom line here is that riders over 175 pounds—which our entire staff is!—will need a stiffer spring up front. This will keep it from diving, actually make the system more plush, and help the balance of the machine as the speeds get up and the terrain gets unfriendly. The shock action is well-rounded in its ability to absorb and dine on a wide range of trail gourmet. We dialed in around 102–104mm of sag and only played with the high-speed compression when the rear felt too low, and we started dragging feet in G-loads. Overall, it helps to create traction, is too soft for any serious motocross work and like the fork benefits from a stiffer coil for girthier pilots.
The machine, albeit no Kate Moss, feels lighter than its 228 pounds. Credit goes to the light feel of the engine, balanced suspension and ergos that are very adjustable through the triple clamps. Husky did update the seat cover, and we consider it only slightly improved; it still feels thick, hard and is slippery. Also, top marks go to really strong brakes with a good feel, Neken bars that have a decent bend, and levers through the clutch, front brake and rear brake that offer superb adjustability. Our bike came equipped with Dunlop AT81s; we’re not sure if these are supposed to be stock equipment, but we sure love them! On other bits, good marks to the airbox and air filter, though use caution when fitting in the filter (it’s super easy to get it cockeyed and it’ll suck dirt). Finding the idle adjuster is nearly impossible, so be careful when you’re lifting the bike onto a stand or out of a hole; there are hand-holds, so use them! If you lift by the fender, there’s a good chance that you’ll rip it right off.
We like the switchable mapping, though to be honest we use the standard map 95 percent of the time and the booster mode only when we’re hill-climbing. The grips feel soft, though they received uneven marks from the staff. They’re either liked or hated. The odometer is sano, the buttons easier to use than the KTM unit and kudos for the radiator fan, which keeps the overheating down to zilch! 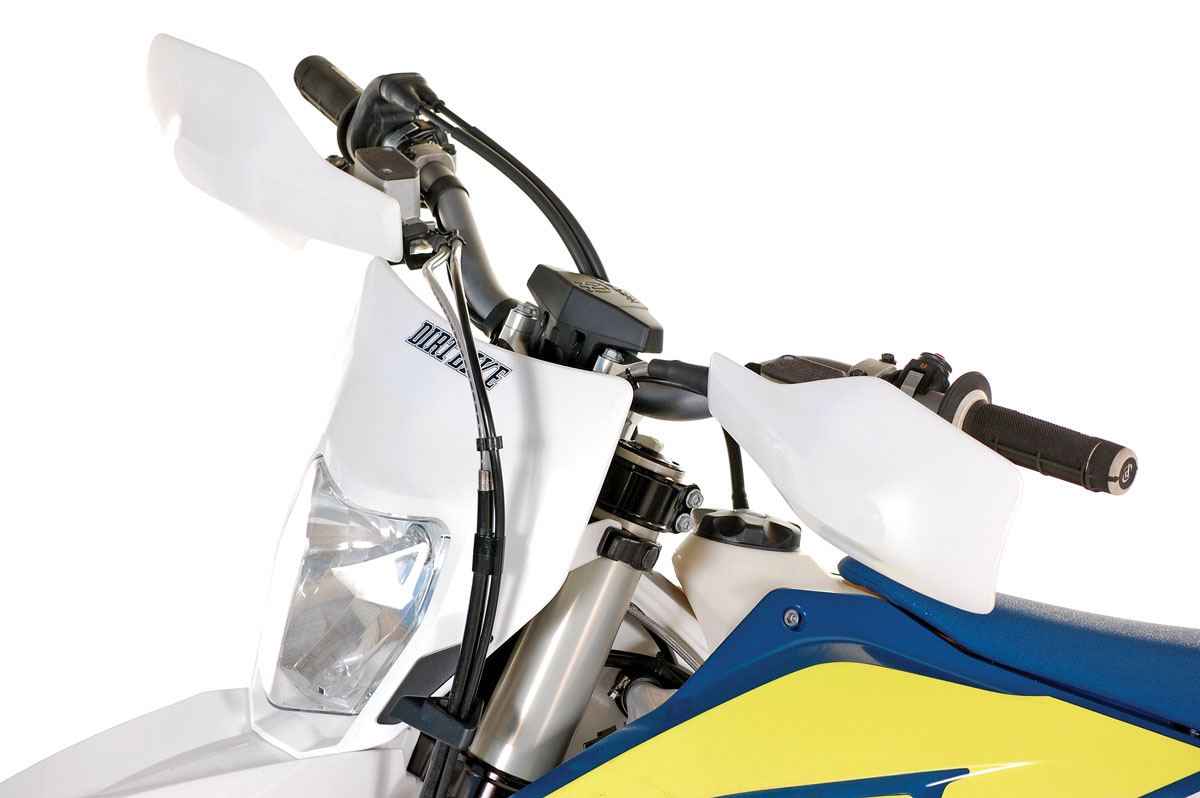 AND IN THE END…
There’s a very good chance that this is in the top four of our favorite off-road dirt bikes of the year. It is a total gas to ride, it gets great gas mileage, the power is seamless and broad, and the versatility factor is off the charts. The linkage rear suspension is a plus for riders who dabble in speedier terrain and does a good job of keeping the entire machine planted and low-feeling. Its most stringent competition comes from the KTM 450XC-W, a PDS design with no linkage. It lacks the hug and connected feel, but is seriously strong in rocky, ugly conditions. This will be a great battle between two stars.
But let this be said: the Husky FE450 is a seriously “serious” off-road weapon. Its strengths are massive, its weaknesses minimal, and it can hit a National Enduro, GNCC or National Hare and Hound on consecutive weekends. It’s that good! o 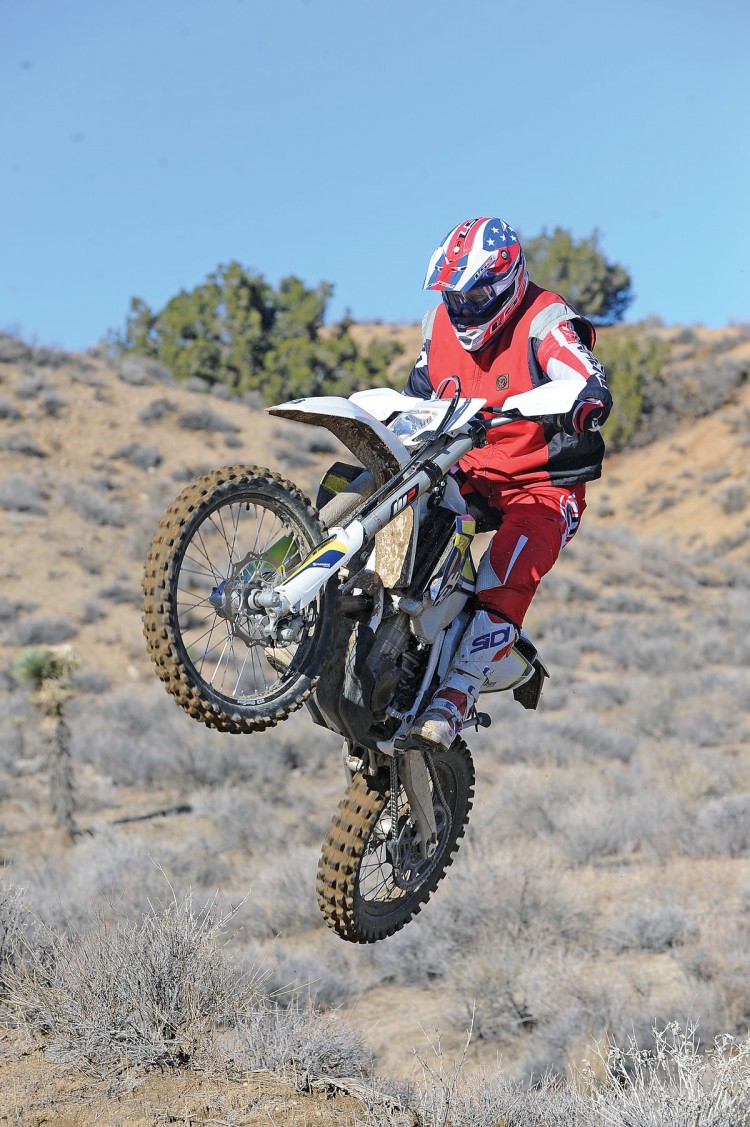