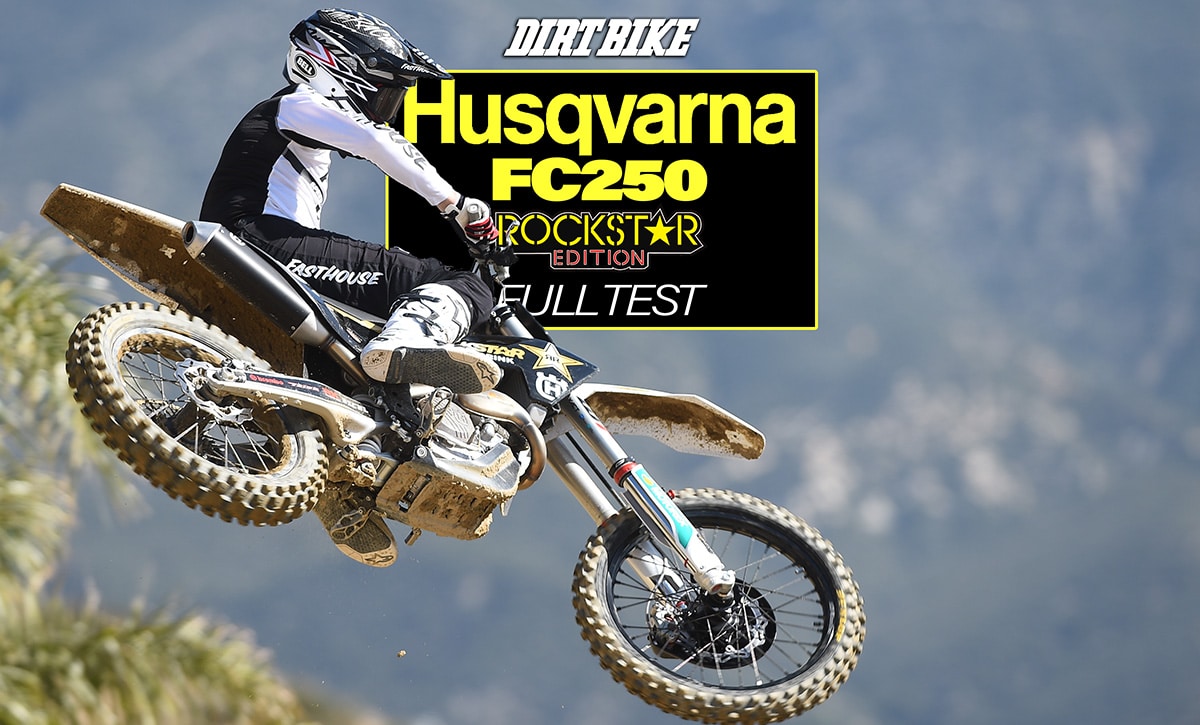 There’s nothing that special about a special edition, at least not usually. Most are highlighted by graphics and accessories that you could buy for yourself. That’s not the case with the 2022 Husqvarna FC250 Rockstar Edition. First of all, the model has never been offered before as a 250—and the 450 version has only been around since 2018. More important, this model shares virtually nothing with the standard FC250. Everything is different—the frame, motor, bodywork, even the suspension. It’s impossible to make one for yourself.

The reason is simple—2023 will be a year of major change for Husqvarna. The factory has been testing its new frame and motors more or less in the open for two years. In order to give its factory Supercross racers the latest hardware, Husqvarna had to comply with the AMA production rules and offer the bike for sale to the general public, thus the bikes that Jalek Swoll, Stilez Roberson and R.J. Hampshire ride are based on this bike rather than the standard FC. There’s a very good chance that the FC250 Rockstar Edition will not be offered again until the next major redesign, which will most likely be three or four years from now.

In terms of part numbers, virtually everything about this bike has changed. But, there are certain concepts that have been carried over. The overall frame geometry is pretty much the same as that of the standard model. That includes the steering head angle and wheelbase. There are, however, very significant changes in structure and rigidity. Likewise, the architecture of the motor is the same, but only in the broadest terms. The bore is 3mm larger. The stroke is 3.8mm shorter. The exhaust valves are larger. The cams are reconfigured, and it all fits into a smaller package that is tilted rearward to lower the countershaft sprocket. And, even though the suspension still features a WP XACT air fork, it has more travel, and the rear shock is completely different.

Obviously, the bodywork is quite different. Interestingly enough, this bike doesn’t get the usual trappings of a Rockstar Edition. To make last year’s FC450 Rockstar Edition appealing, it got extras like an FMF exhaust system and a Rekluse clutch cover. This bike has what will probably be the standard exhaust and clutch cover in 2023. It does get a few of the more subtle upgrades, such as a split triple clamp, a WP holeshot device on the fork guard, a skid plate and a disc guard.

Overall, Husqvarna’s engineers were happy with the way the previous bike handled. It turned well, was reasonably stable and had a comfortable ride. But, there was no question that the steel frame had a great deal of inherent flex, and that was limiting. A more massive frame places the burden of comfort on suspension where, you could argue, it belongs. Plus, the new frame was structured in such a way that the flex associated with the rear shock was more independent from the forces on the steering head. Along the way, the bike gained weight. On our scale, the 2022 Husky Rockstar Edition weighs 228 without fuel. The standard model is 219 pounds. Some of that can be attributed to the clamps, skid plate, holeshot device and disc guard, but most of it is in the new frame.

Husky was also happy with the horsepower produced by the previous motor. It was as fast as anything in the class, but it didn’t always feel that way. The Yamaha had more instant throttle response, and the Honda had more torque.

On both of those issues, Husky made progress. It’s still a very powerful bike, but now it has more of a seat-of-the pants thrill factor. You can get more done with less throttle. In absolute acceleration, we ran it against a standard model again and again and came away without learning much. At full throttle, they’re nearly equal. That means it will pull away from almost anything in the class that doesn’t have a KTM motor. The only trouble is that half the bikes in the class do.

Comparing the handling of the standard model and Rockstar Edition is a more complicated issue. Remember, the standard 2022 Husky FC250 has lowered suspension compared with earlier Huskys and with other bikes built on the same platform (i.e. KTM and GasGas). The Rockstar Edition does not have lowered suspension or a lowered seat height. In the pits, the new bike sits just about a 1/2-inch taller in the middle of the seat. On the track, it seems like much more than that because of the way the bike behaves under power. The rearward tilt of the motor results in more anti-squat tendencies coming out of corners, making you feel like you’re perched higher on top of the bike. Is this a good thing or a bad thing? Neither; it’s just different. On the entrance to any given corner, the bike handles pretty much like a Husky, which is good. It takes very little effort to initiate the turn, and it tracks well without anything surprising. On the corner exit, the feel is different but not alarming or uncomfortable. Most riders said they could feel the extra weight. That’s not surprising. Put on 9 pounds and you’ll feel different, too.

If you have an older Husky and want to use the exact same suspension settings on the Rockstar Edition, they probably won’t work. Suspension and frame flex work together to produce a bike’s overall ride. We liked the old flexy frame, but then again, we rarely race Supercross. We do, however, race on some pretty high-speed tracks that put extreme loads on the suspension and frame. At Glen Helen, for example, the downhill from Mt. St. Helens puts absurd demands on a motocross bike. If you have a fork and shock that can deal with that, chances are it will feel crummy on other parts of the track. Our initial reaction to the stiffer-feeling chassis of the Rockstar Edition was to decrease compression damping across the board for more comfort. We fully expected that to make the descent from Mt. St. Helens a nightmare. It didn’t. In fact, the bike dealt with those extremes far better than most.

With any change this radical, it will be some time before we fully understand the pros and cons and figure out our favorite settings, but we do know this: the previous Husky frame had aged out and reached the limits of its potential. It was time for the next generation. This is a great start, and it should only get better from here.