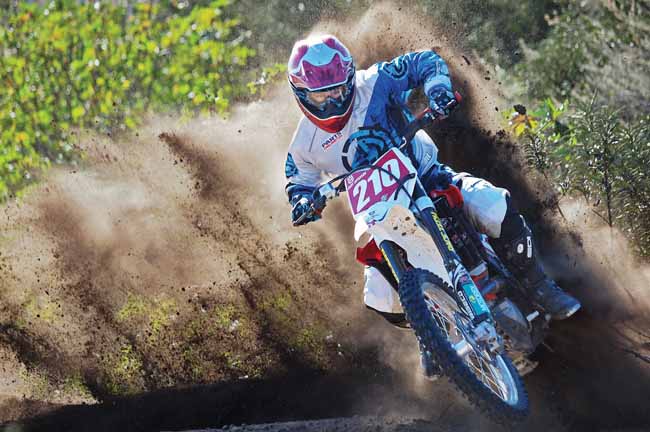 When a motorcycle wins a World Championship, how much does it really mean? Is the Husky 310 that Antoine Meo used to win the E3 World Enduro Championship anything like the TXC310 sold in this country? Meo won the 2011 title on a bike prepared by Fabrizio Azalin of CH Husky in Italy, then promptly took his number-one plate to KTM for 2012. That’s just part of racing. Replacing Meo on Fabrizio Azalin’s CH Husky racing team will be our very own Ricky Dietrich. Will Ricky be handed a super-modified works bike? Will it be something that only Azalin, with his factory connections, can build?
Maybe. But closer to home, Andy Jefferson of U.S. Husqvarna has been racing a 310 of his own. If you’re a history buff, you might remember that Jefferson was a Pro Circuit Husky rider back in the ’70s and holds the distinction of being the first African American to qualify for a Supercross main, some 20 years before James Stewart. Jefferson rides local motocross these days and felt like the 310 might be the perfect bike for an aging Supercross star. But the bike that Andy started with was a 2011 TE310 dual-sport bike, which is even further from being race-ready than the 2012 TXC we test in this issue. Andy had some work to do.
Stripping the bike down to MX trim was the easy part. Off came the kickstand, lights, blinkers and the massive taillight bracket. Off came the catalytic converter, the charcoal canister and all the legal trim. Pro Circuit was enlisted to help with both the motor and the suspension. The 310 motor is based on the 250 motocrosser. Both had a Mikuni ignition in 2011, but the EFI mapping and spark advance for the 310 were set up to meet emission requirements. That wouldn’t work on the track, but reflashing an ignition is a difficult job and more complicated than anything Andy wanted to tackle. There are lots of piggyback EFI modifiers that can provide richer metering, but Andy found they only moved the problem around and never resulted in much of a horsepower increase. For that, you need to alter the spark advance, so he decided to take the entire ignition off the 250 motocross bike and adapt it to the 310.

That presented problems of its own. The flywheel on the stock 310 had a gear that was driven by the electric starter. The smaller 250 flywheel had no such thing, so the electric starter had to go. Along with it, the battery was tossed. This added up to a 15-pound weight loss. Pro Circuit did some mild head porting, which was all that was possible in the super-compact Husky top end. Then, Andy installed a thinner head gasket (offered by Husqvarna) and actually helped Pro Circuit develop a full exhaust system.
Finally, he started messing with cams. He found that the stock TC250 motocross cam moved the power too far north. He didn’t want a big 250 that had to be revved constantly, so he eventually found his way back to the stock cams.
The suspension had to go stiffer—way stiffer. Not only is the TE preposterously soft, but Andy is a big guy. He weighs over 210 pounds without an ounce of fat. Even the TXC’s suspension would be way too soft. Bones at Pro Circuit knows the Kayaba suspension inside out, and he knows Andy almost as well. He made the suspension perfect for Andy on the first try.
So did the 310 become a racer? Absolutely! Andy’s bike is genuinely fast, with an impressive mid-range hit. The power delivery isn’t quite like anything else—not even a KTM 350. Andy’s bike makes enough low end that you can get around the track without making the bike scream. Many people feel that the problem with the mid-sized KTM is that it makes 450-class power at 250-class rpm, which can be intimidating. By comparison, the Husky 310 sacrifices peak power in exchange for a more friendly mid-range. It still has plenty of power—way more than a 250—which allows it to run on the same track as full-size 450s without much of a handicap. But, the 310 feels way lighter than a 450. It weighs around 220 pounds, and that means you can still ride aggressively when the 450 riders start dragging.
Sacrificing the electric starter is a big deal. The Husky is hard to kick, even though it starts almost every time. You just have to do the old-fashioned four-stroke drill—finding top dead center and all that. It can occasionally flame out in the pits or on trail rides. We never had that happen on the track, only when the bike was idling.
Still, Andy’s bike is amazing. It proves that the 310 can be a racer—as if Antoine Meo left any doubt. In stock form, the TXC is a trail bike that can be taken on the track occasionally. With a little work, it can be a racer that can go anywhere. o