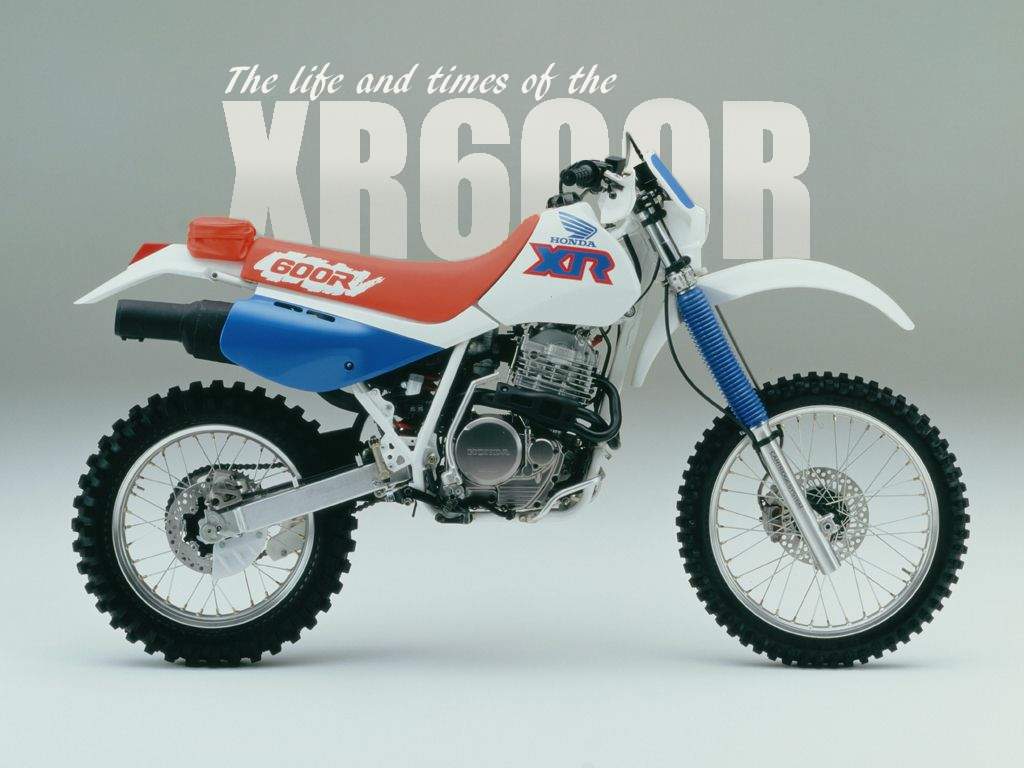 Do you think that anyone at Honda knew? Do you think that when the first XR600R rolled off the assembly line, anyone had an inkling that it would become the definitive off-road bike, not only of a generation, but for two or three generations? Do you think they knew that they had just built a wildly successful race bike as well as general purpose campground cruiser? No, of course not–no more than anyone at Volkswagon knew what would happen to the Beetle. They hoped as much, but they don’t accept advanced reservations in the motorized hall of fame.
The Honda XR600R is almost the definition of an off-road bike; the machine most likely to  have its silhouette on a trail sign. That part isn’t surprising, but the bike’s racing resume is. Honda brass always liked the idea of racing four-strokes, but bowed to public demand and developed a two-stroke line for motocross. Off-road it was a different story. The company supported a four-stroke-based effort in Baja, going back to the Al Baker and Bill Bell era of the ’70s. The first real Honda in-house off-road team was in 1983, and that lead to a long string of desert success. Then completely out of left field, the XR600R attained legend status as a great woods in the hands of Scott Summers. No one saw that coming.

THE RECORD BOOKS
The XR600R was in Honda’s line from 1985 to 2000 as a dirt-only model, and was almost unchanged for the last 12 years of that run. And beyond that, the XR650L continues to this day as a dual-sport machine.
Oddly enough, the XR600R only won the Baja 1000 five times. The bike’s racing history really started in 1982 when Al Baker and Jack Johnson won the SCORE Baja 1000 on the second-year, single-shock XR500R. The XR500R won again in ‘84 and then the XR600R took over in ‘85. The 600 continued to win in ‘86 and ‘87. After a Kawasaki-created dry spell in Baja, the Honda XR600R again won the 1000 in ‘97 and ‘98, after which a redesigned XR650R took over.
On the east side of the country, the championships flowed freely thanks to the freakish abilities of Scott Summers. He won five GNCC titles, four National Hare Scrambles Championships, 69 individual national races and earned three ISDE gold medals on the XR.

TIMELINE
It’s hard to say exactly where and when the XR was born. But the concept was always part of Soichiro Honda’s vision. He was a four-stroke man and made no apologies. He even pushed the idea of a four-stroke motocross bike in the face of an advancing two-stroke tide. Gary Jones says that when Honda first approached him, it was to ride an XL250-based works machine in the U.S. Motocross championships. That didn’t happen, but the 1971 Honda XL250 was clearly a bike for which Honda had great plans, and it started a line of development that led to Honda‘s first 600cc single in 1983. Here‘s the year-by-year chronology:
1972: Honda introduced the XL250. In a time when two-strokes were being hailed as the key to the future, Honda  made a radical departure from the norm. The XL was a compact overhead cam four-stroke with four valves. The bike was a technological milestone, but it was heavier and slower than the two-strokes of the time and was quickly overshadowed by new models that followed.
1974: Honda divided its development resources in two different camps; four-stroke and two-stroke. Side-by-side in Honda’s line were the MT, MR and CR two-strokes and the XL four-strokes. The top of the XL line was the 350, which was starting to look a little like the XR600R of the future.
1979: The twin-shock XR500 was introduced. This bike was the first dirt-only big four-stroke from Honda. The XL series consisted of street-legal machines and prior to 1979, the only XR was the Honda XR75 mini. Honda made a huge commitment to four-stroke dirt bikes that year by offering five XR models; 80, 185, 250 and 500. This is the real birth of the modern four-stroke dirt bike.
1981: The XR500 got the “R” suffix along with a single-shock chassis. The bike was taking shapes as a race bike in the hands of people like Al Baker. At the time, the 25-degree steering head angle was considered radically steep. It handled well, but the weight was going up, not down and it pushed the 300-pound mark.
1983: Honda redesigned the XR’s motor, giving it two carburetors. Honda took the racing effort in Baja in house with the likes of Bruce Ogilvie at the helm. This year also saw the introduction of the motor as a full 600 in the form of the XL600 dual-sport bike.

1985: This was the year that the first Honda XR600R was officially released. The motor still had two carbs and it was still heavy, but the bike was taking shape. Interestingly enough, the motor wasn’t taken straight from the XL600. It had a different bore and stroke.
1988: This is the Honda XR600R that we all know and love. In 1988, it lost almost 20 pounds by shedding the twin carbs and gaining a Nikasil cylinder. The whole chassis was redesigned with a more race-oriented mission. At the same time, the motor was given an electric starter for another model called the NX650. It was striving to capitalize on Honda’s Paris Dakar wins with a small fairing. Unfortunately, no one in the U.S. had ever heard of the Paris Dakar and the bike died quickly.
1991: The big changes would come no more for the XR. It got a cartridge fork in ‘91 and subtle motor changes in 1993, and was changed very little for the next 10 years.

1993: Honda made a serious effort at building a dual-sport bike that was truly dirt worthy. The Honda XR650L was introduced in ‘93 and it was almost identical to the dirt version. It got the electric starter and the 7mm stroke increase from the now-forgotten NX650 as well as a steel tank, blinkers and a smog pump. The bike exists in this same form today.

2000: The Honda XR650R was introduced. In spite of having a name that sounded like the previous XRs, it was completely and totally new.  This was the bike that Bruce Ogilvie built specifically for Baja. It had a liquid-cooled motor and an aluminum frame, and it was slightly heavier than the bike it replaced. Baja riders agreed that it was vastly superior to the old machine for high-speed racing and dirt touring, but it never achieved the same acceptance from the public. The old, air-cooled XR continued to coexist in Honda’s line for a year before it was quietly dropped. The liquid-cooled XR was also dropped after 2007, a victim of a new generation of lighter four-stroke dirt bikes.

THE OGILVIE FACTOR
Bruce Ogilvie was personally identified with the Honda XR600 throughout its run. He worked in Honda’s Product Testing department, but actually had little influence on the original 600. His input was much stronger on the 1988 remake of the bike. By that time he had been running Honda’s off-road racing effort out the back door of the testing department for a few years, building what would become a Baja dynasty.
In 1988 Honda and Ogilvie hit a frustrating roadblock in the form of Kawasaki Team Green. Mark Johnson  took over Kawasaki’s race effort and by amazing fortune hired Larry Roeseler to lead a concentrated Baja effort on the KX500 two-stroke. What followed was a string of Kawasaki-beats-Honda headlines for 10 years. Through that period it would have been easy to take a CR500R and go against the KX on a more even playing field, but Honda refused. Honda and Ogilvie stuck with the four-stroke no matter how hard it was.
Bruce was a general. He took his orders from above and carried them out to the letter. If that called for racing an already dated four-stroke against a two-stroke that was lighter and faster, then so be it. Bob Rutten was one of Oglivie’s army and he remembers those years well. “We started getting some very fast motors from Japan,” he recalls. “They were too fast. Most of the time they blew up. The factory would run them on the dyno for hours, but that wasn’t like Baja. The gearboxes held together once we started running a four-speed, but I didn’t care for that. First was like running a very tall second gear, and I remember one year in Matomi wash where I really struggled with the sand and the gearing.”
Ogilvie’s army outlasted Team Green in Baja. After the death of Danny Hamel, Mark Johnson and Kawasaki lost the desire for Baja, leaving Honda to dominate the peninsula, setting a record of victories that lasts to this day. Bruce Ogilvie passed away after a long illness in 2009, but was still pre-running and helping with the Baja effort in his final years.

THE SUMMERS FACTOR
Scott Summers was kind of an outsider at Honda. When he started winning races on the XR, it was as a privateer. Then Honda finally accepted that he was for real and support came from Honda HQ. Even then, Summers still ran his own program with the help of Fred Bramblett. The east coast guys often found themselves at odds with Ogilvie and the factory, but no one could argue with results. Summers won and won and won.
Scott was such a phenomenon that he changed the sport. GNCC racing was no big deal at the beginning of the ’90s. It was a series that centered around one iconic race: the Blackwater 100. But once Summers started winning on his unlikely mount, the venue got more and more attention until it arrived where it is now. The GNCC series is the most acclaimed off-road racing series in the world today because of Scott Summers and the formidable promotion efforts of his partner Fred Bramblett.
That never really translated to acceptance of the XR600R as a woods racer. There were a few big men who rode them, but Summers was one of a kind. Scott’s set-ups often would only work for Scott, and sometimes even he didn’t know why. For example, he rode with one rear shock through most those years. The magic shock was sent back to the factory to be duplicated, but Scott never found anything that worked as well.
He was one of very few four-stroke riders in the woods and he always said that worked to his advantage. When he came upon lapped riders, they knew who was coming and would get out of the way. Racers like Scott Plessinger didn’t have any such announcement, and lapped riders were such a problem for the pros in those days they would often have to make over 1000 passes in a single event. In 1996, Honda released the XR400R with Scott in mind. But he hated it. He stuck to the 600 with an occasional ride on the XR250R.
Later, Scott became a victim of his own publicity machine. As the GNCC series grew more and more popular, it became more competitive and Scott had to push his massive machine harder and harder. He suffered a series of serious injures and eventually retired in 2001, the same year the XR600R itself was retired. He made a comeback later, but it was a different Scott on a different bike.
All eras eventually come to a close.