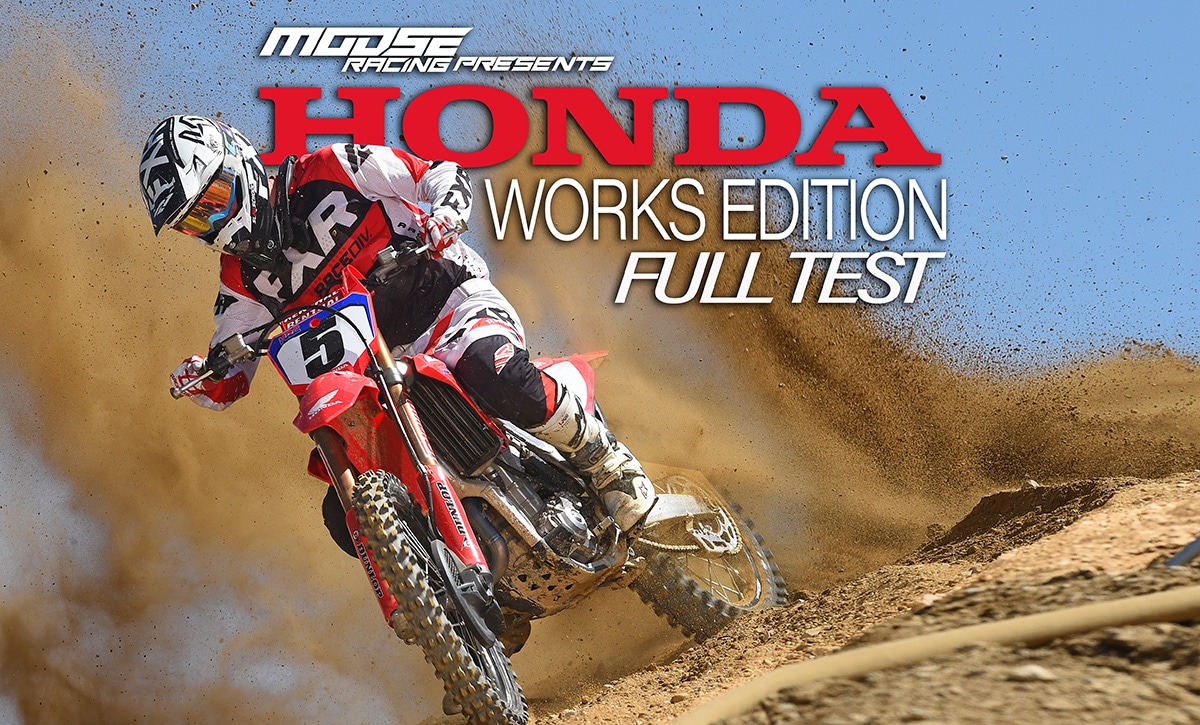 If you don’t know any better, you might think the 2021 Honda CRF450RWE is just another race replica. That’s forgivable. There’s a long history of companies that try to capitalize on the success of their race teams by offering special editions that are nothing more than graphics and bling. That’s not Honda. The CRF450R Works Edition (CRF450RWE) has a long list of items that are aimed at improving performance in addition to having a look that mimics the bikes ridden by Ken Roczen and Chase Sexton.

THE BLING STOPS HERE
The Honda RWE begs obvious comparison to the KTM Factory Edition, but the concept is quite different. In the case of the KTM, the FE is sometimes a preview of the next year’s model. Other years, it’s a current model with a bunch of cosmetic upgrades and an Akrapovic slip-on silencer. In the case of the Honda, there’s more, including:

Otherwise, the Honda is basically a 2021 CRF450R, which is pretty special in its own right. It’s the most dramatically changed motocross bike of the year. Everything was rethought and redesigned, starting with the cylinder head. It now has a center exhaust port and a reshaped combustion chamber. The exhaust header is routed 74mm closer to the engine on the right side. The twins, obviously, are gone. The single, right-side muffler was reshaped and moved 13mm inboard.

The engine still uses a single overhead cam, hence the “Unicam” trademark. It differs from conventional SOHC designs in that the cam is positioned closer to the intake side so that it can use finger-followers to operate the intake valves and more conventional rockers for the exhausts. The camshaft itself was reconfigured with the decompressor relocated from the right end to the left. The throttle body is also new. The injectors were repositioned, enabling the spray to reach all the way to the back of the butterfly, thus cooling the upstream side of the intake path. The air-boot volume was increased dramatically, and the air box is now accessed with the removal of a single side-panel bolt.

Long-time Honda riders are still partying over the new hydraulic clutch. In addition to getting a Nissin master and slave cylinder, the surface area was upped by 27 percent, an eighth clutch plate was added and stiffer springs were used. The chassis has a long list of new features, too. The wheelbase is now 1mm shorter (now 58.3 inches). The rake is 0.3 degrees steeper (27.7 degrees). Trail is reduced by 2mm (114mm). The swingarm angle is 0.9 degrees steeper (14.5 degrees). The seat height is 5mm taller (38.0 inches). Ground clearance is increased by 8mm (13.2 inches), and the distance from the front axle to the swingarm pivot is 1.8mm longer (36.0 inches). Honda says the frame is 1.54 pounds lighter and 20 percent less rigid laterally, while vertical rigidity is unchanged.

WHERE DID WE LEAVE OFF?
The standard 2021 CRF450R quickly became infamous for having somewhat glitchy fuel mapping. Honda has now addressed that with a second-generation map. If you have a 2021 CRF450R, CRF450RX or CRF450RWE, any Honda dealer can re-flash your ignition with the upgraded specs for free. We met with the Honda guys to have our standard model re-flashed at the same time that we first rode the CRF450RWE, so we got to compare the new mapping with the original spec. It’s a big improvement. There’s no trace of the original hesitation that would occur when the motor was suddenly put under a load at mid-throttle openings. As a side note, even without the update, the hiccup wasn’t as severe as it was in our original test. That took place in September when it was crazy hot. In cooler weather, it was much less noticeable. Regardless of that, it’s gone now on both our standard Honda and our Works Edition.

It’s also interesting just how different the Works Edition is on the track. First of all, it’s faster. That’s saying a lot. The standard Honda already felt like it was the fastest bike in our 2021 450 shootout. The dyno showed that there were other 450s that made as much, but the Honda’s curve was very steep in the middle, which gave it more of a hit. With the porting and the Yosh pipe, that big hit is much smoother. The bike is actually easier to ride than the standard model. It’s still a very aggressive motocross bike, though, and we would say it still is designed to appeal to a pro-level rider. That seems much more appropriate on a bike that’s called the “Works Edition.” Of the three maps that are available through the handlebar switch, the standard one (one flash) is the favorite with most riders. The aggressive is just that; a little harder-hitting in the middle. No one seemed to prefer the milder map. Likewise, traction control wasn’t a big hit, although most riders conceded that it might be helpful in really adverse conditions. 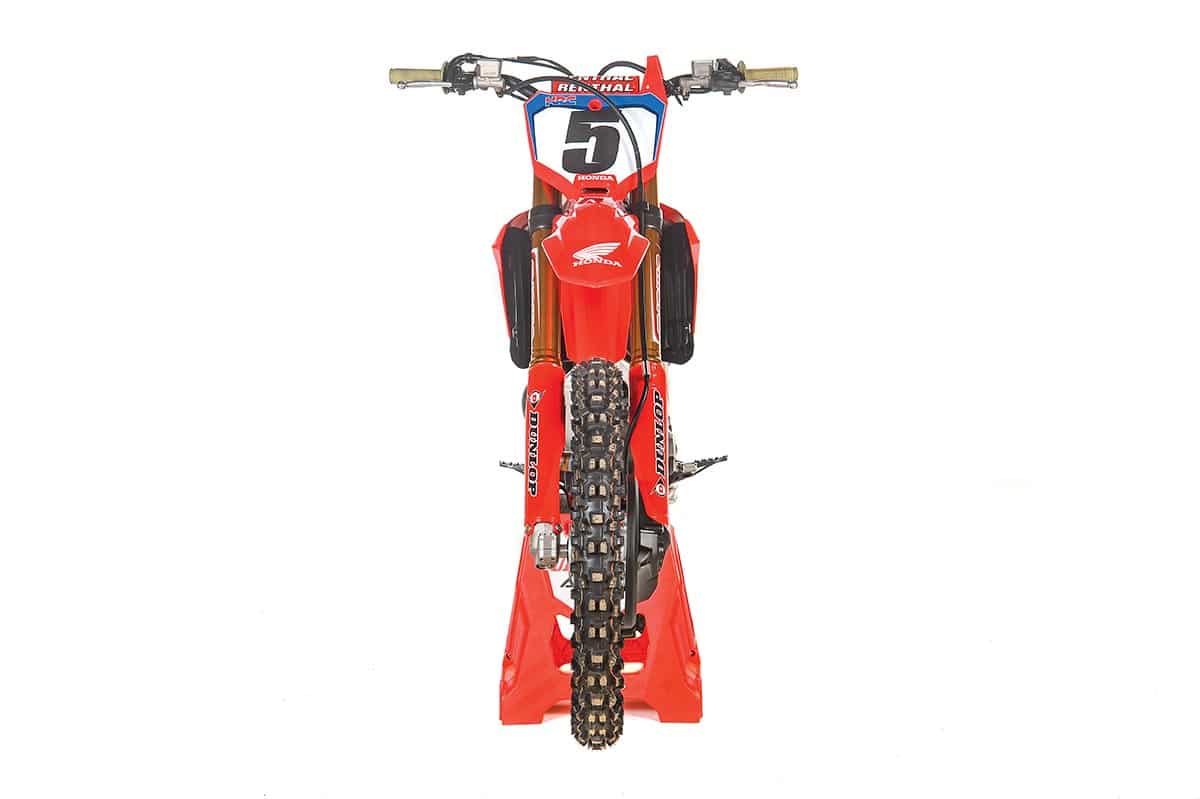 HOLD ON AND TWIST IT
The suspension also generated some red flags with the standard edition. The valving and springs are the same for the RWE, so some of the same issues still exist. The Ti-nitride coating, however, makes everything feel different. This caught us by surprise on last year’s RWE. The reduction in friction makes the suspension ride lower in the travel at both ends.

If you’ve already read the test of the standard model, you know that we felt the bike was already soft, particularly in the rear. The coatings affect the fork more than the back, so the bottom line is that both ends feel soft now, but at least they are more balanced. For the average sportsman rider, perhaps that’s not a bad place to start. More advanced riders, however, will probably want to up the rear spring rate from 54 N/m to 56. We know of some riders who have had success with re-valving alone, but that all depends on who you are and who does the work. We have ridden the bike with a stiffer spring in the rear and loved it.

The overall handling of the bike is very Honda-like—that is, light and easy to turn. The previous version had fans and critics because of its quick-handling traits. If you’re a Honda lover, there’s nothing about the new bike that will alarm you. If not, you might still like it. The 2021 Works Edition, like the standard model, is a little calmer and stabler. The bike is lighter than the previous twin-pipe version by about 6 pounds. On our scale, it’s 233 pounds without fuel. That makes it the lightest of the Japanese 450s, but still around 10 pounds heavier than a KTM.

The $12,380 price tag is going to be a shocker for most riders, especially in light of the fact that the KTM Factory Edition is only $11,299. Honda adds $1781 to the price over the standard bike. If you’re the type of rider who’s going to upgrade with aftermarket stuff, it still makes sense. The price for the Yosh system is $1200. The Hinson parts are $500, so you get everything else for almost nothing. Plus, you might get a little Ken Roczen vibe, and that’s hard to put a price on.

WHAT IS DIRTY RACING? CLASSIC DECOSTER

KAWASAKI KX125: BEHIND THE BUILD