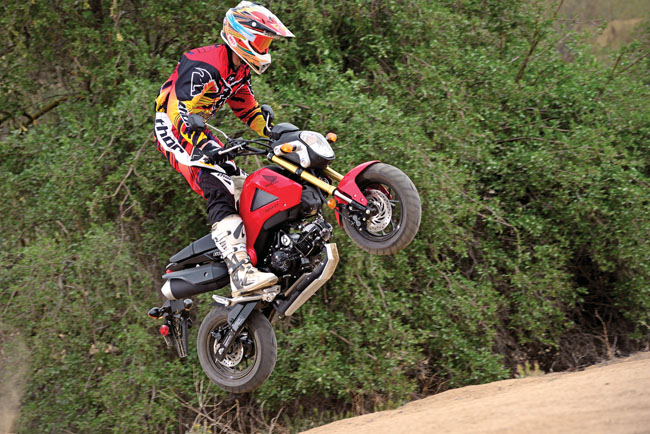 We didn’t get it at first. The Honda Grom was the latest rage to drive Honda dealers crazy. The bikes were actually being rationed and weren’t sitting on the showroom floors for more than a day at a time. What was the big deal? It was too small to be a street bike and too big to be a mini.
Then, we rode one. We loved it, but we still didn’t understand why. In case you don’t know what a Grom is, here’s the rundown. It’s a fully legal street bike, but with 12-inch wheels and a top speed around 60 mph. It sells for a steep $3199, providing you can find a dealer who isn’t scalping it. It’s not okay for the freeway. It doesn’t have the credentials for a short-range commuter, and it isn’t really aimed at kids. So, what is it? Fun. The Grom is a monument to those who worship at the alter of kicks and giggles, with no real agenda beyond the quick grin. Honda might have looked back at the now-ancient success of the Trail 70, which was a street-legal mini bike and still ranks as the best-selling motorcycle of any single year. Not only did it sell, it was a gateway drug to an entire generation of green, young riders and was probably responsible for the growth in motorcycle sales that followed.
The Grom is way more sophisticated than the old Trail 70, of course. It has a fuel-injected engine and displaces 124cc. Horsepower is said to be around 10. The instrumentation is like something you might find on a full-size sport bike. The gearbox has only four speeds, but that allows it to keep up with traffic on surface streets. Once you reach about 45 mph, there’s really not much left, and it’s a slow creep up to 60 on big roads.
Big roads aren’t the point, though. The Grom is a neighborhood Stuka, made for dive-bombing residential streets and parking lots. Even though it’s the size of a mini, it almost has the ergos of a full-size street bike. The relationship between the seat and footpegs is about the same as that on a sporty 600. You can lean the Grom way over until the pegs drag and get all the same sensations you do on a big, fast street bike, but you’re doing it at 25 mph instead of 90. We can’t comment on the social responsibility of racing around cul-de-sacs and driveways, because we’ve never been qualified to deal with topics that include the word “responsibility.” But, we can say it’s crazy fun.
Which brings us back to our favorite subject. How can we make it more fun? That’s easy. We want to make it into a dirt bike. Kenda makes tires that will fit and we’ve already seen a prototype skid plate.  Stay tuned. If we don’t do it, someone else will.