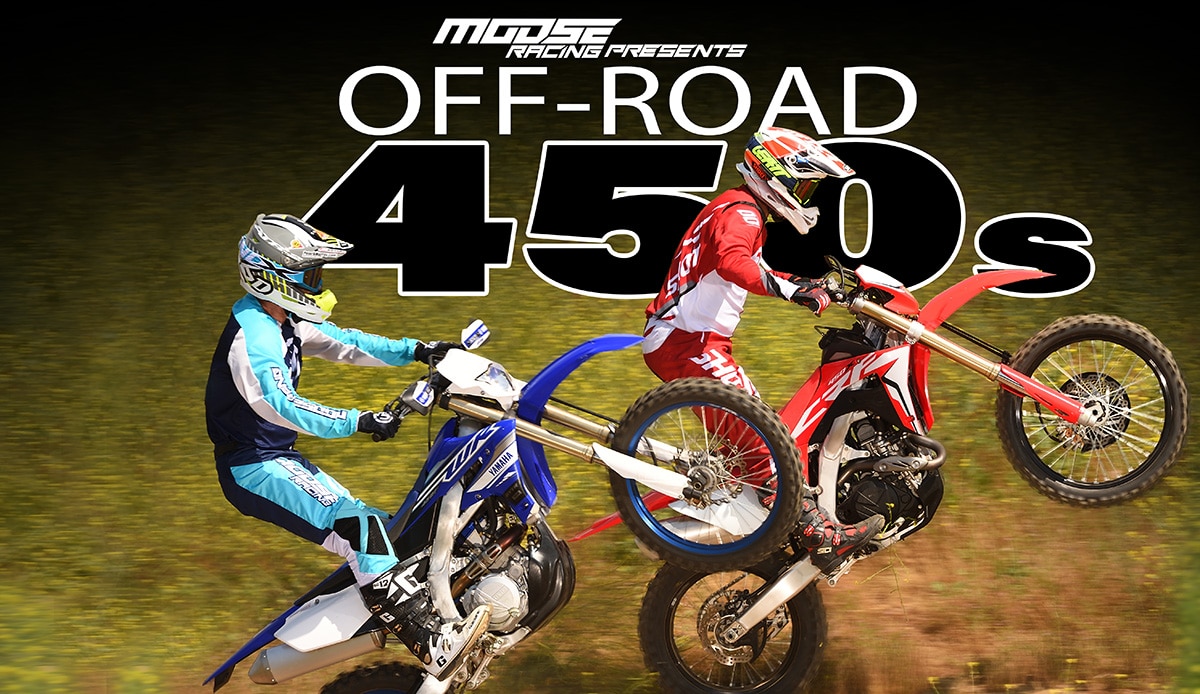 The Honda CRF450X and the Yamaha WR450F are both classics. They haven’t, however, been known for cutting-edge technology. Off-road bikes usually lag a step or two behind in design, occasionally catching up all at once. Both the Honda and the Yamaha had a leap year in 2019. Both suddenly caught up to their motocross counterparts and are completely different from their previous iterations, which presented a natural opportunity for a one-on-one comparison between two true off-road 450s. It should be noted that Suzuki had the RMX450, which was unchanged in 2019, but it has not been announced for 2020.

MISSION STATEMENT
When we say these are true off-road bikes, it goes beyond them being a softer, quieter breed of dirt bike. The federal government actually gets in on the definition. U.S. Customs insists that a bike be classified according to its purpose. Either it’s meant for public roads or not. If not, then it’s either a closed-course competition vehicle or an off-highway vehicle. MX bikes and even cross-country racers are exempt from regulation, but the Yamaha WR450F and the Honda CRF450X, as official off-road vehicles, must meet noise and emission standards. The noise standards are actually tougher than the emissions requirements. Yamaha goes to great lengths, selling the WR with a throttle stop and a secondary baffle within the muffler, just to pass the test by an inarguable margin. The Honda doesn’t have these measures.

Setting regulations aside, the real reason for these two bikes is the need for a true off-road bike. Motocross bikes are built for a very specific purpose, and what works well for Justin Barcia on a track doesn’t necessarily work for the rest of his family on the trail.

HONDA CRF450X
The original Honda CRF450X had one of the most impressive racing resumes in the off-road world. It won the Baja 1000 and other SCORE races dozens of times, but that’s a little misleading. The original X was never designed to be a racer. It was simply an easy bike to hop-up, and it had experienced very few changes in 13 years, so racers knew exactly what to do. The 2019 X is so completely redesigned, it’s a new ballgame. Initially, it appears to be based on the CRF450R motocross bike that was all new for 2017. It would be more accurate, however, to say that the X is based on the new Honda CRF450L dual-sport bike, which was based on the ’18 MX bike. For the L and the X, Honda used the MX bike’s layout and geometry, but almost every part is slightly different. The new bikes got a six-speed gearbox, a bigger clutch and more oil capacity, all of which required slightly larger engine cases. That required a wider frame and so forth.

The X engine is in a much milder state of tune than the MX bike’s, but hotter than the L’s. It has EFI mapping that is designed to be tamper-proof. This is, of course, vital to the emission certification, as well as the bike’s repurposing for the trail. The bike also has an air-injection system, but it stops short of using a catalytic converter. The muffler is much more compact than the one used on the L. For that matter, it’s less complex than the twin-canister system used on the motocross bike. 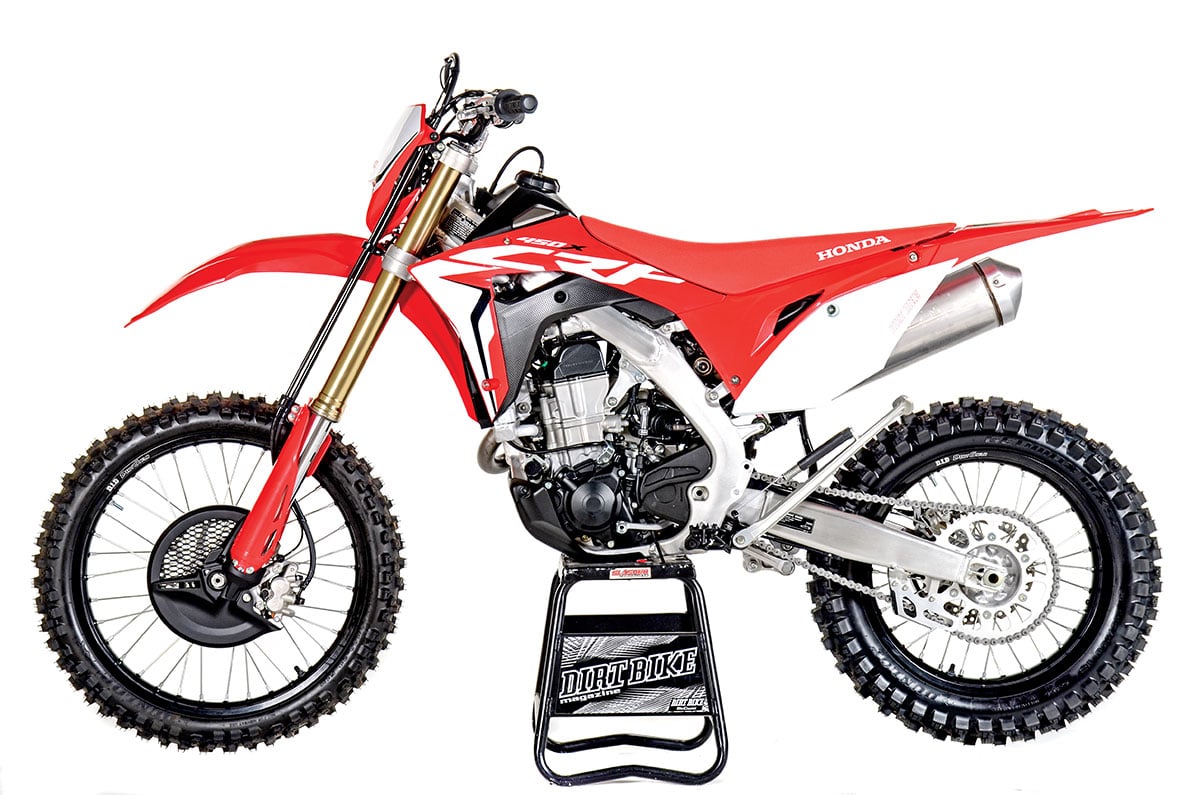 The chassis has the same geometry and even the same Showa suspension components as the motocross bike—just much softer. The fuel tank is larger (2.0 gallons) and is made of plastic rather than titanium. It has a halogen headlight, an 18-inch rear wheel, a spartan instrument cluster and a kickstand. It didn’t get a radiator fan like the Honda CRF450L, but you could easily install one.

YAMAHA WR450F
Yamaha didn’t leave its off-road 450 on the vine quite as long as Honda did. The WR has been updated at least four times since its initial introduction almost 20 years ago, so the 2019 WR replaces a bike that was already fuel injected, already used modern suspension components and even used Yamaha’s distinctive rearward exhaust port. When the YZ was redesigned in 2018, the WR was slated to be next, but governmental blessing took longer than expected, presumably because of the federal shutdown this past January. Even now, the Yamaha’s CARB certification isn’t satisfied in the state of California, so it isn’t green-sticker-legal for the 2019 model year. As far as noise and emissions, it has all the right stuff, except for the evaporative canister. The throttle stop and the inner baffle are back, but virtually all WR owners circumvent these on day one.

The new WR is very closely related to the latest YZ—same frame, same engine cases, same KYB suspension components. Instead of going to a six-speed gearbox, which caused so much work for Honda, Yamaha made a wide-ratio five-speed that fit within the same cases. First gear is even lower than on the Honda. The one critical difference between the WR and the YZ is the EFI system. The YZ uses a clever Wi-Fi system to allow users to modify the power delivery with a smartphone. That’s against the rules for an off-road bike, so the WR’s ignition is fixed. The power delivery is appropriate for off-road, but if you want a little more fire, Yamaha offers a fairly easy path. The company’s accessory division sells a competition black box and the Wi-Fi link. With those parts and a pipe, you could almost convert the WR into a YZ. Like the Honda, the Yamaha has a headlight, a taillight, a kickstand, an 18-inch rear wheel and a large fuel tank (2.2 gallons). Our test bike had accessory handguards. 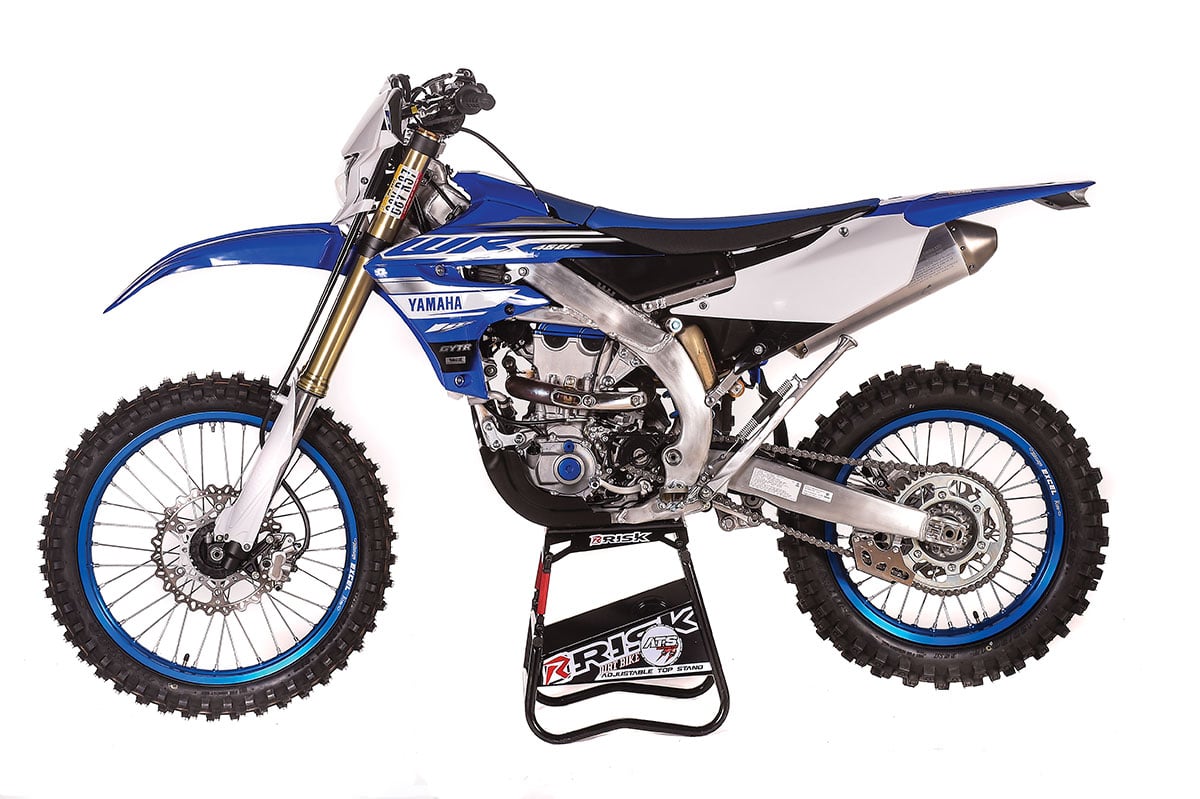 MOTORHEAD
Repurposing a race bike into something easier to ride and more fun is a little trickier than just taking away power. Both Honda and Yamaha clearly put a great deal of effort into this. Both are smoother than their MX counterparts, but both have just enough spark to be interesting. The Yamaha has good low-end power and the liveliest delivery. It’s a little rowdy down low, but the revs are easily controlled with the throttle. It also has a lower first gear and a very predictable clutch with a light pull. When you get into slow, technical spots, first gear might be too low, so you often find yourself shifting back and forth and using the clutch frequently.

The Honda has similar power down low, but the motor is a little more hyperactive. You find yourself using the clutch even more often, and when the motor is free-wheeling, it wants to rev up instantly. It can be difficult to find a steady rpm. Once you ease the clutch out, the power delivery is smooth and controllable, but you always feel that there’s a risk of stalling. This happens only occasionally. The clutch, incidentally, is much better than the one on the MX bike in terms of feel and pull, but it’s still not quite as good as the Yamaha’s. The Honda’s first gear is a little taller than the Yamaha’s.

Once you’re out of the tight stuff and moving along, the bikes change personality. In faster stuff, the Yamaha is a little more racy. It feels just like the motocross bike, but with a little less power and a little softer suspension. The Honda, on the other hand, has a mellower feel. Which one is faster? They’re so close that any roll-on or drag race is inconclusive. The Yamaha might seem more aggressive simply because the rider gets so much feedback in the form of engine noise. The upward-pointing intake makes a loud sucking sound that bystanders can’t hear. The MX bike makes the same noise, but it’s drowned out by the louder exhaust. The noise that really matters is what people hear in the distance. In that regard, both bikes are outstanding and virtually equal. 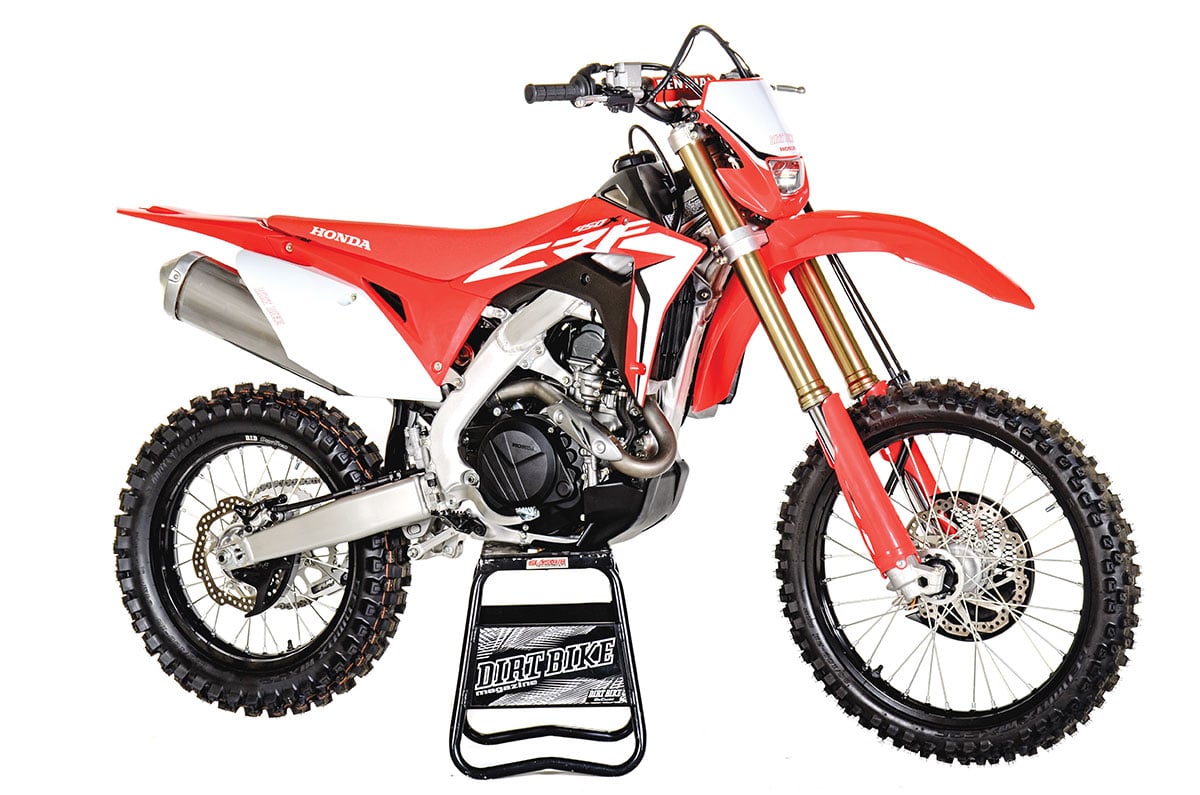 TRAIL TALK
Neither one of these bikes feels particularly small or light. The Honda, however, is downright heavy. On the Dirt Bike scale, it weighs 263 pounds without fuel. That’s 5 pounds heavier than the carbureted bike it replaces. That’s not too surprising, as Honda’s dual-sport 450 and motocross 450 are each the heaviest in their respective classes. The Yamaha is no feather, but at 252 pounds, it’s 11 pounds lighter than the Honda.

That’s not a deal-killer for either one of these bikes. If you’re in the market for a 450 off-road bike, you’ve already conceded that weight isn’t your number-one priority. And despite the weight, we have to say that we love the way the Honda handles. It’s a comfortable bike that feels balanced and stable at any speed. The steering is light, but it still gives you a firm, secure bite in most terrain. This isn’t to say that the Yamaha has any tangible faults in the handling category, but it fails to generate rave reviews. The rider position is just a little odd, with a low seat and tall bars that make the rider feel like he has to climb way over the front of the bike in order to corner. In the suspension department, both Honda and Yamaha did outstanding jobs. Both started with top-shelf components from the motocross world, and then changed the specs for off-road. If we had to pick favorites, we would say the Honda was a little more cushy in rocks at low speed, and the Yamaha was set up better for whoops and a faster pace. They might be the two best-suspended bikes in the off-road world. 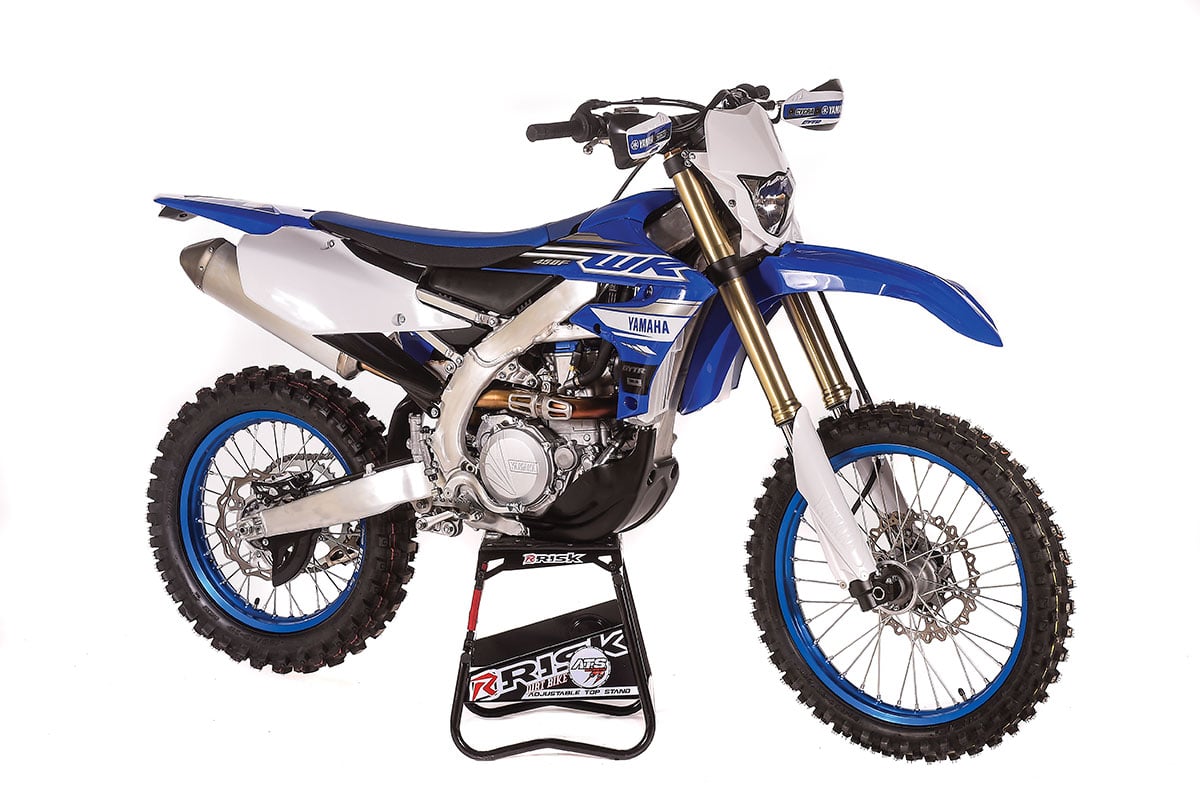 LIFE IN THE TRENCHES
These bikes don’t make much noise when they’re running, but they do when they stop. The Yamaha’s radiator fan is louder than the exhaust, and it seems to run continuously when you stop on the trail. The Honda, on the other hand, doesn’t have a fan, so its radiators make non-stop gurgling sounds. If you spend much time in first gear, this erupts into outright spewing and steaming.

Neither bike has a kickstarter, and we don’t care. The batteries always work. The Yamaha is a little more stubborn about starting. If it doesn’t fire up right away, you can’t just hold the starter button down indefinitely. Stop, then it usually fires up on the second try. The Honda is less finicky. Neither bike has handguards. They both should. The Honda does have a nice skid plate and a front disc guard, but it still has an old-school, 7/8-inch handlebar.

In the final analysis, we’re pleased with both bikes and delighted that they’ve come so far. We never would have believed that emissions-friendly bikes that are this quiet could perform so well. The coughing, stalling, bogging EPA bikes of the past are, apparently, gone. We’re realists, though, and we know that at least half of the riders in this market will want a path forward to more performance. The Yamaha offers the clearest path. Not only does the company’s accessory division provide an affordable means to make the bike into a competition machine, but you start with a package that’s significantly lighter. That goes above and beyond.