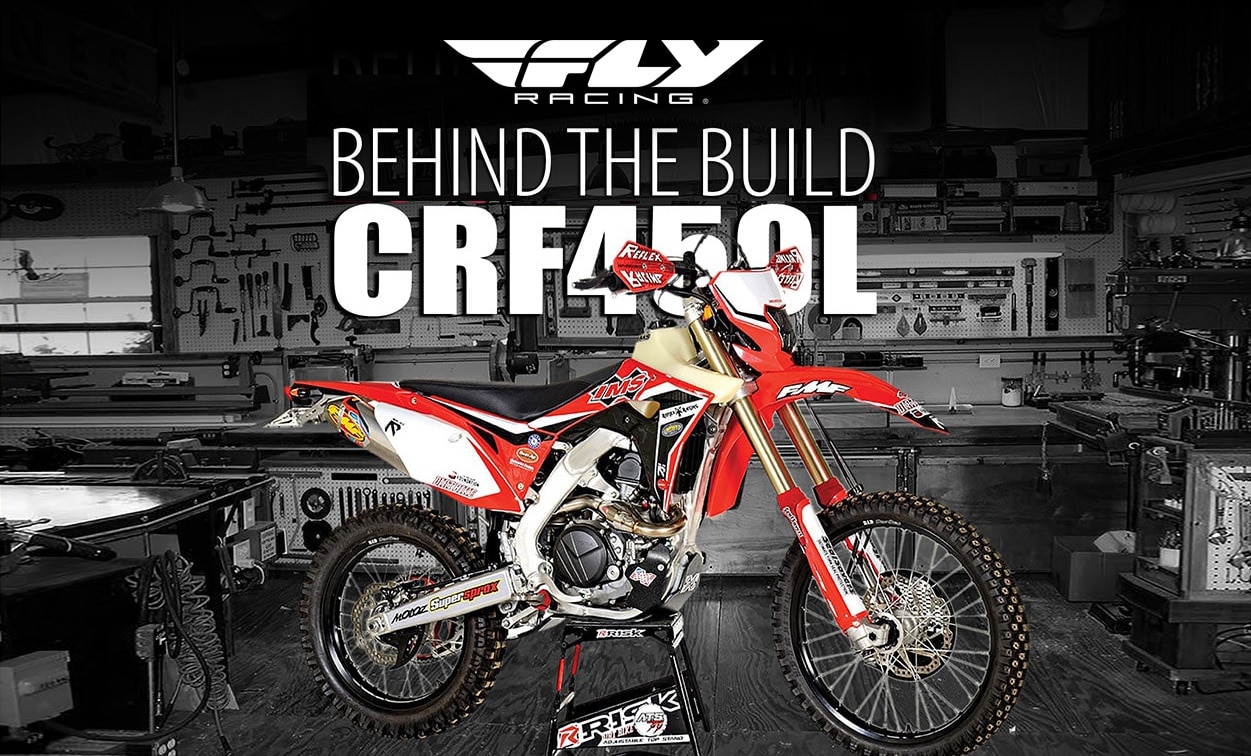 The Honda CRF450L is based off the CRF450X that the SLR Honda team used to win the Baja 1000, but in our dual-sport shootout, the 450L received high marks in the on-road category and low marks in the off-road category compared to the others. We teamed up with Scott Wright and the crew at IMS Products to make the 450L a little more off-road-friendly. 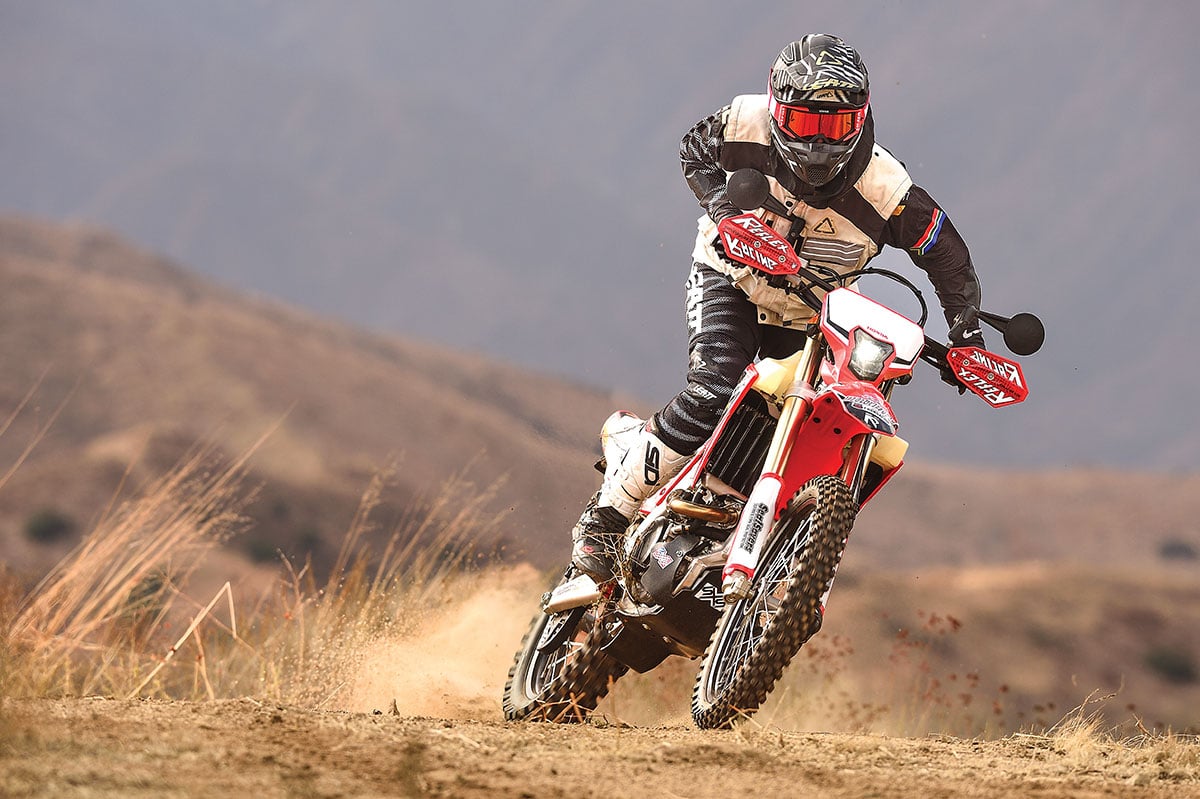 Our first order of business was to make our 450L lighter. This sounds easy, and at first just taking things off works really well. The more difficult part is finding items to replace them with that retain the same function. We can’t stress enough how important it is to know your state’s laws when it comes to dual-sport machines. Some modifications shown in this story may change the on-road status of the vehicle, depending on the state it’s registered in. Blinker assemblies, heavy OEM mirrors and the big, ugly license plate holder were among the first items to be discarded. Now these are all crucial items to any on-road vehicle that must be replaced with working units. The blinkers were replaced with universal flush-mount models, and the OEM mirrors were replaced with Double Take folding enduro models that are easily tucked out of the way when transitioning from street to trail.

Eliminating the entire license plate holder was a little harder than we anticipated. The holder actually adds some structural integrity to the subframe that had to be addressed. The complete holder assembly was removed. The rear brake light and blinker housing were modified by trimming away plastic using a hot knife and a very steady hand. An aluminum cross brace was added to the rear of the subframe to keep the brake light and new license plate holder from flopping around while on the trail. The OEM aluminum holder brackets were shortened, and a couple of L-brackets were used to remount the stock license plate holder that is now at a different angle to ensure it doesn’t make contact with the rear wheel in bottoming situations.

A CRF450X complete swingarm and 2017–’18 CRF450R linkage replaced the stock 450L units. In one fell swoop, this got rid of all the extra chainguards and brackets, eliminating unwanted weight and provided a longer linkage ratio, changing the stance of the bike and improving off-road performance in rough terrain. Suspension on this build was left stock, valving-wise, with the addition of slightly stiffer fork springs and 355cc of oil to keep the front-end from diving. A GPR Version 4 Pro stabilizer kit with oversized bar mounts was added. This gave us stability in high-speed off-road settings and allowed the use of 1 1/8-diameter bars for improved comfort instead of the 7/8-diameter units that come on the 450L stock.

A couple of protection items added to the build included Reflex wraparound handguards with replaceable plastic shields and a full-coverage skid plate with additional linkage guard from SxS. The IMS fuel tank holds about a 1/2-gallon more than the stock unit without being any wider, and their Enduro pegs feature a much larger platform and more aggressive tooth pattern than the stock units.

The CRF450L comes off the assembly line a bit choked up all around in the performance department. The ECU is non programmable, and the exhaust was clearly not made to enhance performance. This is where the CRF450L benefits from being based off the CRF450X. Vortex makes an ECU unit that replaces the stock box and comes preprogrammed ready to use. FMF doesn’t make a CRF450L exhaust system, but it does make a system for the CRF450X off-road model. This Q4 stainless steel aluminum system features a Megabomb header design and a removable spark-arrestor insert. The Vortex ignition and FMF exhaust combination gave the 450L more power throughout the entire power curve without any major side effects. We did experience a couple of flame-outs, but that might have been rider error. Internally, the machine was left alone, but the external emissions hardware and thermostat housing were removed and replaced with an inline thermostat from Trail Tech that controls when the OEM Honda electric fan kicks on.

When the final bolt was tightened on this CRF450L build, we concluded that just like the Dirt Bike magazine staff, the 450L has a hard time taking off weight and keeping it off. Yes, we did lose weight eliminating and modifying parts, but then we gained weight back by adding off-road necessities like a larger IMS fuel tank, Reflex wraparound handguards, Supersprox hybrid sprocket, SxS full-coverage skid plate, GPR Version 4 stabilizer and a comfy Seat Concepts Comfort XL gripper seat.

Performance was easier to find and keep. The Vortex ignition and FMF exhaust definitely pepped up the 450L. The IMS CRF450L is still on the heavy side for extremely tight, technical trails, but now has the handling and engine performance to conquer just about anything on- or off-road.

JAMES STEWART INDUCTED IN THE AMA HALL OF FAME