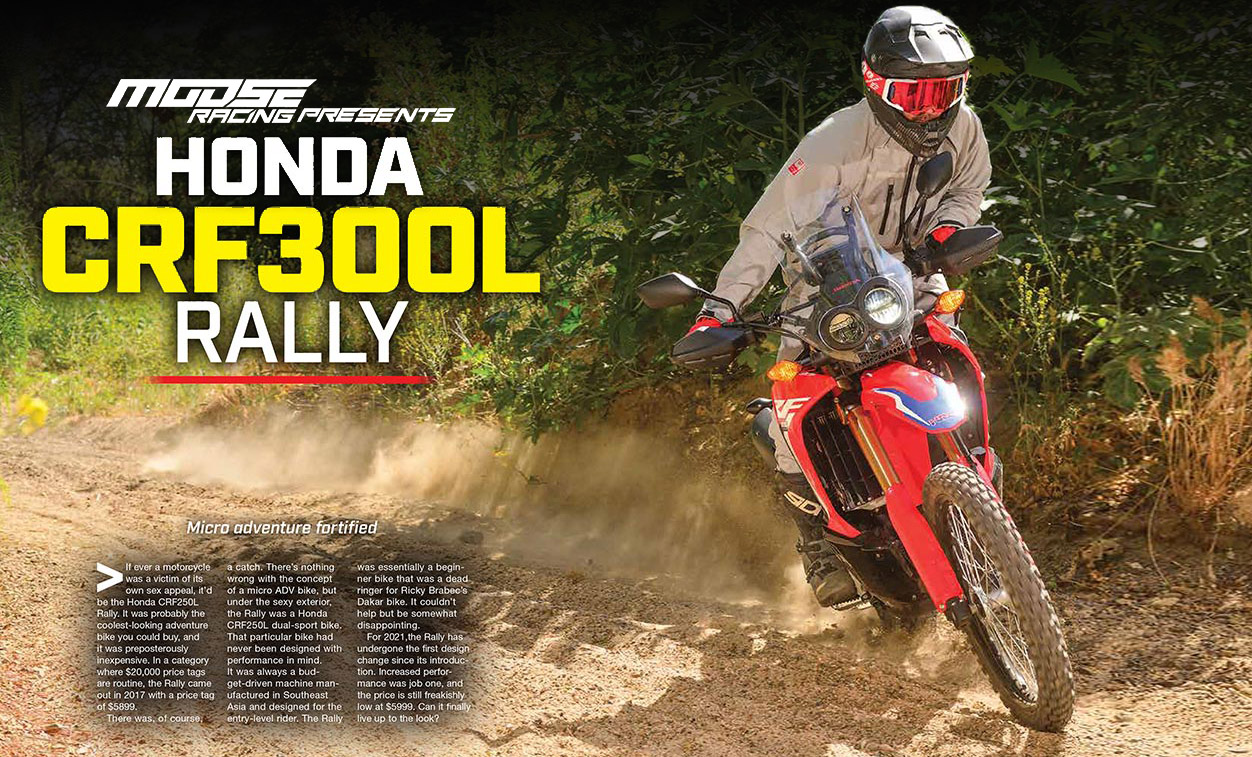 If ever a motorcycle was a victim of its own sex appeal, it’d be the Honda CRF250L Rally. It was probably the coolest-looking adventure bike you could buy, and it was preposterously inexpensive. In a category where $20,000 price tags are routine, the Rally came out in 2017 with a price tag of $5899.

There was, of course, a catch. There’s nothing wrong with the concept of a micro ADV bike, but under the sexy exterior, the Rally was a Honda CRF250L dual-sport bike. That particular bike had never been designed with performance in mind. It was always a budget-driven machine manufactured in Southeast Asia and designed for the entry-level rider. The Rally was essentially a beginner bike that was a dead ringer for Ricky Brabec’s Dakar bike. It couldn’t help but be somewhat disappointing.

For 2021,the Rally has undergone the first design change since its introduction. Increased performance was job one, and the price is still freakishly low at $5999. Can it finally live up to the look? 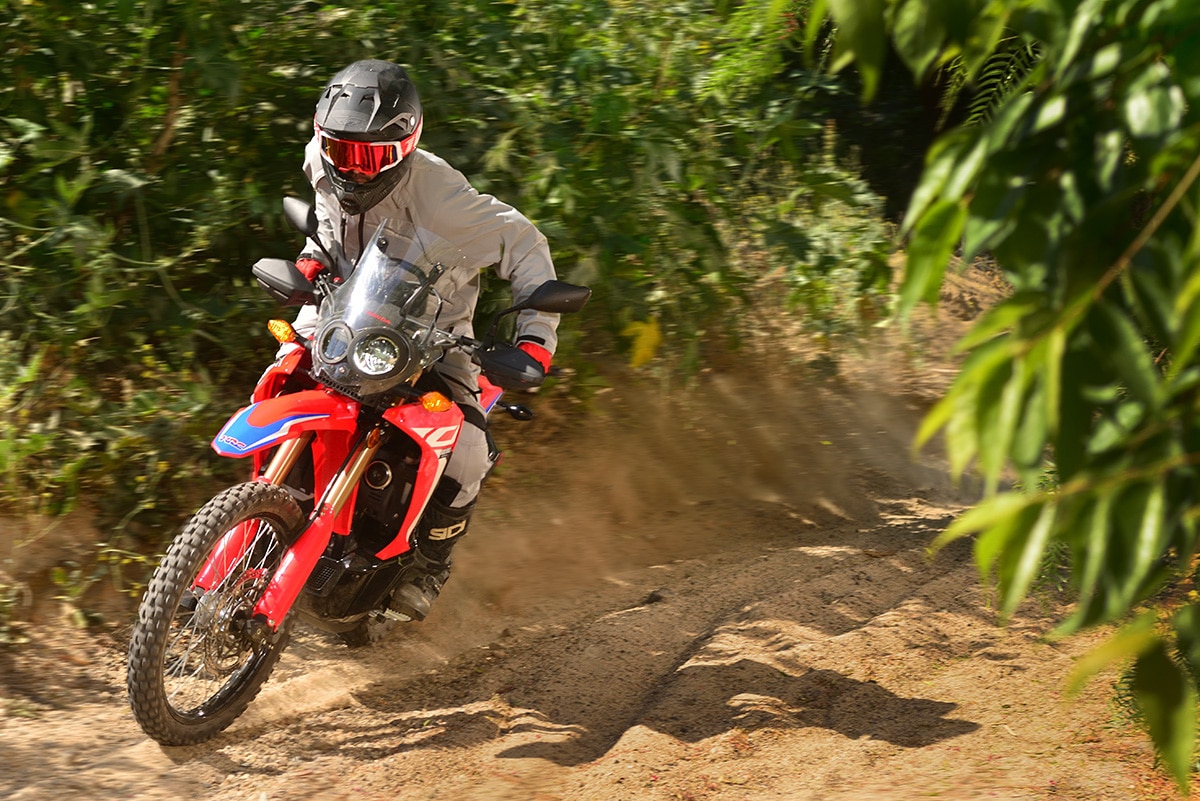 MORE POWER, LESS WEIGHT
Under all the adventure trappings, the Honda motor has the same basic CRF250L core, but most parts have been altered in one way or another. The stroke was increased by 8mm to arrive at 286cc. It got new camshafts, and both the airbox and the exhaust were redesigned. It still has a six-speed gearbox, but the gaps are tighter between ratios, particularly in the lower gears. Sixth is still a very tall overdrive. The engine cases were redesigned as well to increase ground clearance. The clutch is new, too, and has an interesting design that Honda calls “slip assist.” This configuration has attributes of a slipper clutch to reduce engine braking and also uses engine torque to assist manual clutch disengagement; in other words, it has kind of a power-assisted clutch pull. 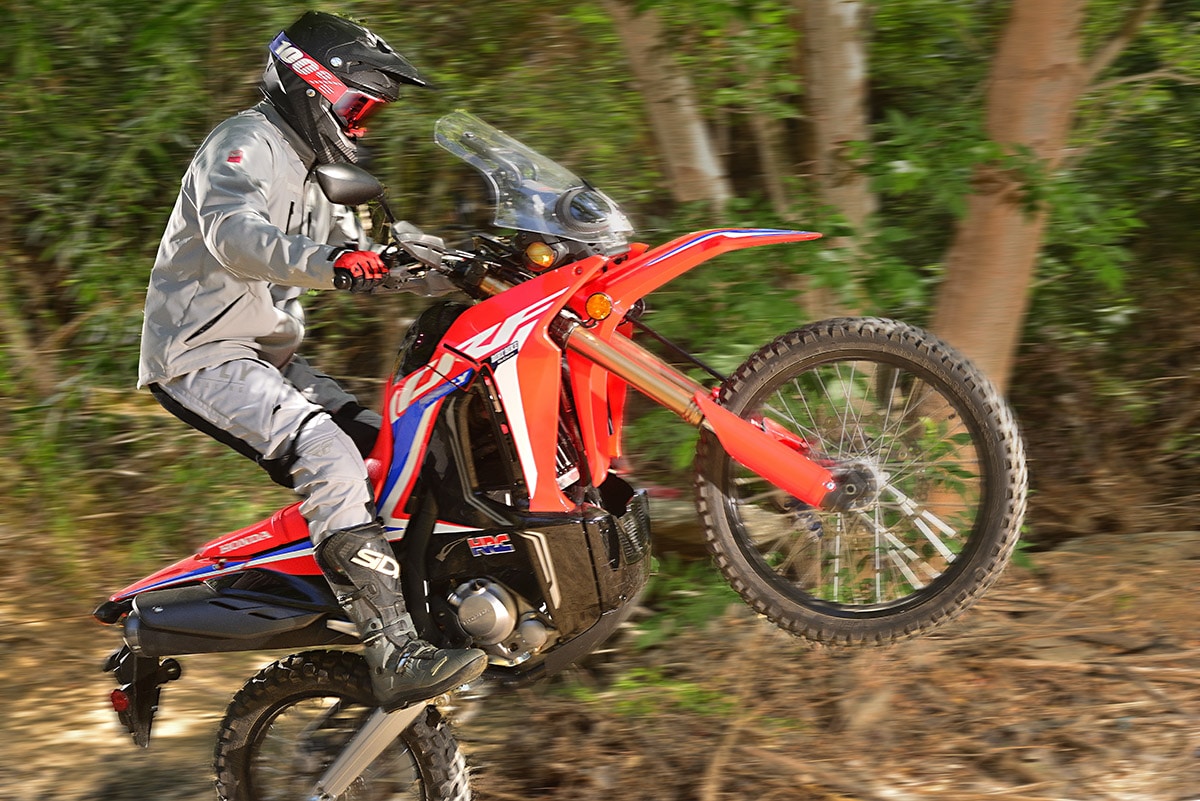 The steel perimeter frame might not look that new, but everything has been revised slightly. It’s a little more compact and less rigid. The lower trope clamp is aluminum rather than steel, and the swingarm has been completely redesigned, also for less rigidity. Between all that and new bodywork, the overall weight is down to a claimed 333 pounds, which includes about 21 pounds of fuel in the 3.4-gallon tank (increased by 0.7 gallons). That’s about 10 pounds lighter than the 2020 CRF250L Rally.

On the suspension side of the equation, the Rally still has non-adjustable KYB components, but the travel is slightly decreased 10.2 inches at each end.

RIDE LIKE IT’S DAKAR
To appreciate the 2021 Rally, you have to have a little context. The previous version, as we said, was too good to be true at that price. An experienced rider had a hard time getting past the motor output, which was around 25 horsepower on top. That’s about the same as a current KTM 85SX in a package that weighs more than twice as much. No matter what the bike did right, it was overshadowed by the power, which was just a little too little. The increase in bore and the other changes lift the bike over the threshold of necessity. Now, on any given ride, the lack of power isn’t all you think about. The 300 Rally still isn’t a powerful bike by any means. It still requires a big handful to get any given task done. The difference now is that it gets the task done. Just that little bit of extra power opens doors that were previously shut and allows more rides in more kinds of terrain. You aren’t going to get to the top of the hill quickly, but you will get to the top.

Even more critical than the increase in power is the change in the gearbox. Before, it didn’t have enough power to pull shifts particularly on long hills. Now, you can shift a little early, and the closer ratios allow you to get away with it. It still can’t really pull the shift to sixth. That gear isn’t for going faster; it’s to allow a drop in engine rpm so that the motor isn’t buzzing as hard on the highway.

Unfortunately, now that the motor isn’t the weakest link, the rider focuses on other matters. The main item here is suspension. The Rally is far too soft for off-road riding with a full-sized adult. Small riders in the range of 120 pounds are more appropriate, but even they would benefit from more damping. Without any adjustability whatsoever, the bike is bouncy, for lack of a better word. If there are no pumps on a smooth dirt road or on pavement, the ride is plush, but you get a great deal of fork dive. The front brake is excellent, which makes the fork seem even softer. If you’re an experienced off-road rider and take the Rally on a ride with your buddies on 300 two-strokes and serious off-road machines, you will be tragically out of the bike’s comfort zone.

THE LONG HAUL
Where is the Rally’s comfort zone? This is a perfect means to allow a spouse or a new rider to join the ride. Adventures are always better when they’re shared, and the Rally tears down barriers that keep potential riders at home. It’s comfortable and easy to ride. The clutch pull is ridiculously light, and even the seat height is moderate by adventure bike standards. It has excellent range, allowing about 200 miles between gas stops and good wind protection so that you can ride 200 miles without feeling like an overused crash-test dummy. Is it a bike that an experienced rider should consider? Probably not. Whatever machine actually generated that experience will likely be more substantial, so the Honda Rally won’t be a step up in the adventure world. It is, however, an excellent step into that world

Even though we’re drawn to the Honda Rally because of its Dakar connection and to the CRF450RL for its performance, the mainstay of Honda’s dual-sport line has long been the CRF250L, which is now superseded by the CRF300L. As a 250, it sold more than all of Honda’s other dual-sport models combined, several times more. It’s all about price. The 2021 CRF300L sells for $5249. That’s $1400 less than the Yamaha WR250R and $200 less than the new Kawasaki KLX300.

It is, essentially, the same bike as the Rally without the adventure trappings. The frame-mount fairing gives way to a triple-clamp-mounted headlight, it has a smaller tank, a narrower seat, no handguards and softer suspension. It got all the same motor and chassis redesigns as the 2021 Rally. That includes the new slip-assist clutch, the 8mm increase in bore, new cams, new intake, new exhaust and the more compliant chassis. The suspension is a little softer because the bike’s weight is less.

The CRF300L is a slightly better off-road bike than the Rally because of that weight difference. It’s around 20 pounds less, although it still pushes the 300-pound mark. That 20 pounds makes a difference any time you’re in slow, technical terrain. It gets better traction, stops more quickly and seems to be just a hair faster. Like the Rally, though, you have to have a history with the 250L before you appreciate the improvements in the 300’s power output. It’s a night-and-day difference, allowing you to expand your ride into legitimate off-road terrain.

Also like the Rally, the 300L’s biggest shortcoming is now suspension, simply because the motor is no longer the weakest link. The fact that it’s soft isn’t the main issue, but rather that it needs more sophisticated, adjustable damping.

That, of course, is one of the factors that allows Honda to keep the price where it is. Our advice is to enjoy the CRF300L for its intended purpose. It’s a reliable, affordable entry-level dual-sport bike. To want more for that price is just greedy.