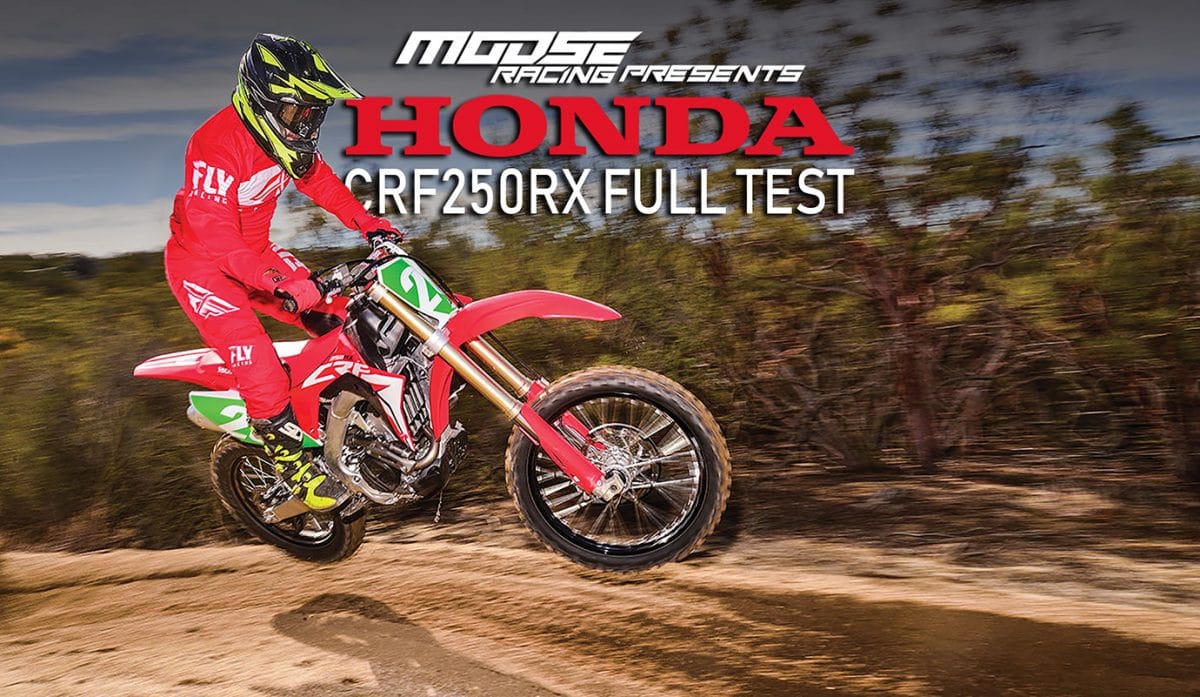 Honda went a little nuts this year. The new-bike development team was asked to produce a boatload of new dirt bikes for 2019. In addition to major changes for the existing motocross bikes, there is a new CRF450RWE special edition, a new dual-sport bike, a new Baja off-roader and three new play bikes. Now this: the CRF250RX off-road racer has just arrived. Honda is showing a level of interest in and commitment to American off-road riders that we haven’t seen in a very long time. The new 250 joins the CRF450RX in a growing category we call closed-course competition off-road bikes.

Let’s pause for a few somewhat technical definitions that are very important here. When Honda or anyone else imports a motorcycle, it must fall into one of three categories. It has to be a street bike, an off-road bike or a closed-course competition bike. Street bikes (including dual-sport bikes) have to meet fairly strict noise and emission requirements. The homologation process is expensive, and the standards are difficult to meet. Off-road bikes face slightly more relaxed standards, but the process is just as bureaucratic and expensive. Only closed-course competition bikes are excused from all of this. Until recently, this classification was mainly for motocross bikes. Now, more and more motorcycle makers are blurring the lines between MX bikes and off-roaders.

OFF-ROAD TRANSFORMER
In order to create the CRF250RX, Honda engineers didn’t have to log too much overtime. Most of the work was done last year when the CRF250R motocross bike was redesigned from scratch. We often hear a bike is “all-new” when in fact there are only a dozen or so changes to the existing bike. But, in the case of Honda’s 2018 250 motocrosser, it was completely and totally different from the previous CRF250R. The motor got electric start and a double-overhead-cam design with finger-followers between the cams and valves. The aluminum frame was designed to direct the engine’s intake over the top shock mount, and the suspension was reconfigured with a coil-spring fork.

The conversion to an off-road bike followed a simple formula. The bike got seven key features:

What it didn’t get is also significant. There’s no change in the transmission ratios or final gearing. There’s no headlight, taillight or odometer. There’s no spark arrestor, no hand guards, and the twin mufflers are identical to those of the motocross bike. This is a purebred race bike.

SILK PURSE
Going in, we figured the new Honda 250 motocross bike was the wrong place to start for a new off-road bike. The previous SOHC Honda was the low-end torque king of the 250 class in 2017. After the redesign, all that was gone. The new motor was a screamer with everything on top and nothing down low. You wouldn’t think that would be a good recipe for off-road, but you might be surprised. As on the motocross version, there’s a handlebar mounted switch that allows you to choose between three different power deliveries: standard is position one, mild is two and aggressive is three. When the RX is in position three, it’s virtually identical to the motocross bike in position one. The RX’s other two settings are tailored specifically for off-road riding. And while neither of them gives the bike more torque, they do change the nature of the bike’s “hit.” In standard mode, the bike is crazy-smooth down low. That’s the nature of modern 250 four-strokes anyway; they find traction and they’re easy to manage. The Honda’s soft output at low rpm makes it the all-time traction king. On level ground, there’s no downside to that kind of power. Of course, off-road riding is usually defined by a distinct shortage of level ground. That’s where the clutch comes in. When you come around a blind corner and find a sudden embankment to climb, the Honda can be brought to life, but you have to think quickly. The motor is crazy powerful on top, but you have to gain something like 8000 rpm in a split second to go from lazy, fun mode all the way up to full rage. The Honda can do it. We don’t know of many other 250 four-strokes that free-rev so quickly. When you pull in the clutch and twist the throttle, the motor comes to life [now]. Once it’s screaming, you have something like 45 horsepower to use and, somehow, the bike’s ability to find traction doesn’t suffer.
Clearly, the Honda has a split personality. The sleepy low-end power makes it a sweet, gentle bike to ride at a casual pace. The wicked top-end power makes it a vicious racer. The trick is learning to make the two bikes coexist. If you aren’t ready with the clutch, the throttle and the shifter, you can’t fall back on torque. There ain’t none. You have to learn to change modes quickly; the bike can do it if you can.

JUNGLE CRUISER
If you haven’t read the 250 motocross shootout in this issue, we apologize for the following spoiler: the Honda is the best-handling bike in the 250 four-stroke world. Like the motocross bike, the RX is universally loved for its combination of stability and effortless cornering. It’s a large bike with a spread-out rider compartment. Most riders feel comfortable on it. It’s not an especially light bike, though. Without fuel, it weighs 235 pounds on the magnificent Dirt Bike scale. It’s about 8 pounds heavier than the motocross version, but most riders say the difference seems like more. Having said that, it’s still a light bike by off-road standards. Some of the feeling of massiveness comes from the fuel tank, which looks big but never interferes with the rider. Another factor might be the weak bottom-end power. As we know well, power affects handling in a big way.
The suspension makes up for a lot. The 49mm Showa SPG fork is excellent. It responds well to small impacts and still holds up the front end well for hard braking. It’s a bit too soft for real riding on a motocross track, but that’s okay. It still doesn’t bottom hard or do anything wrong. Same goes for the rear. Honda hit the mark perfectly for hardcore off-road riding. 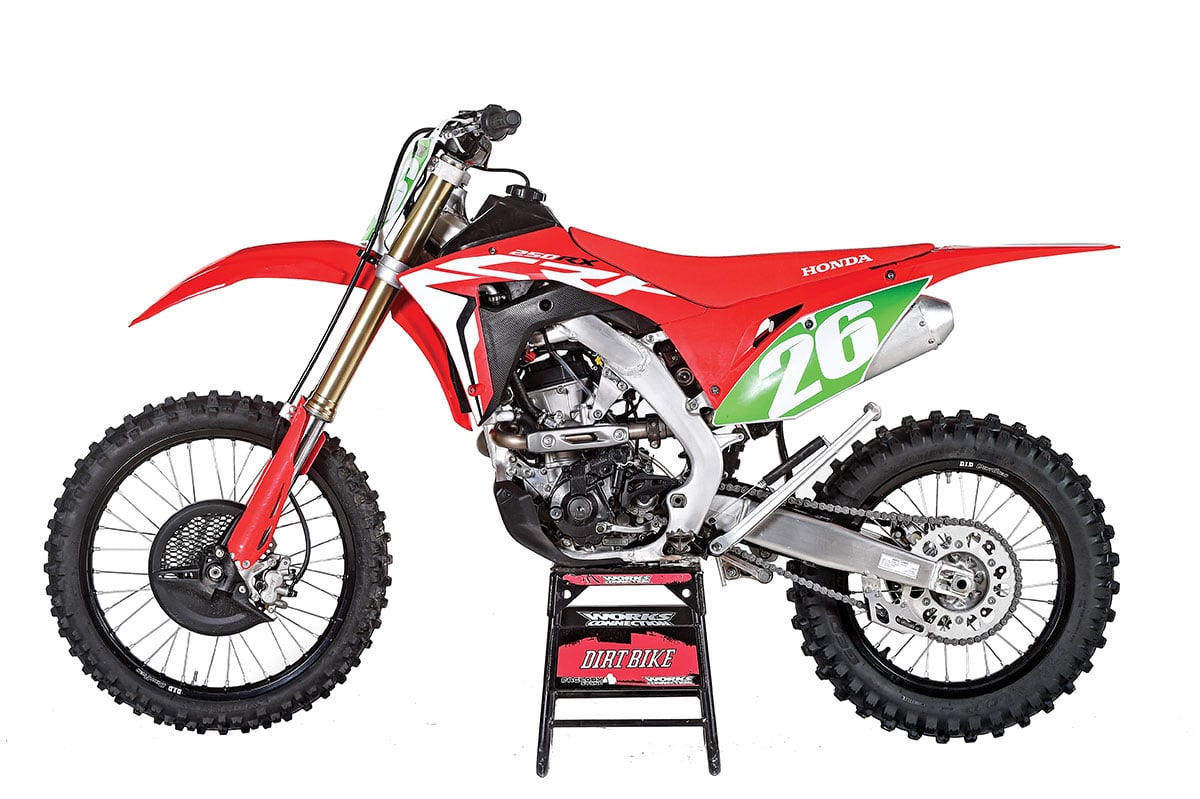 OFF-ROAD CREDIBILITY
We don’t understand the twin-pipe concept. It’s especially out of place for an off-road bike where you might have to buy two spark arrestors instead of one. Honda’s plan to leave it as close to the MX bike as possible doesn’t always seem to make sense. We can forgive the fact that it uses the same gearbox as the MXer. Yes, it would be nice to have a six-speed like the CRF450X, but only for top speed. First gear is okay in everything but the tightest trails, and we like the tightly spaced gear ratios. We would like to see other off-road equipment first—handguards, a radiator fan and, sometime before the earth is swallowed by the sun, a hydraulic clutch. It’s very likely that some of that stuff is already on the way. Honda dropped the old CRF250X from the line after the 2017 model year. Odds are that there’s one in the works for 2020. That will be aimed at the true off-road rider, leaving the CRF250RX to the mission it was really designed for—going very, very fast.