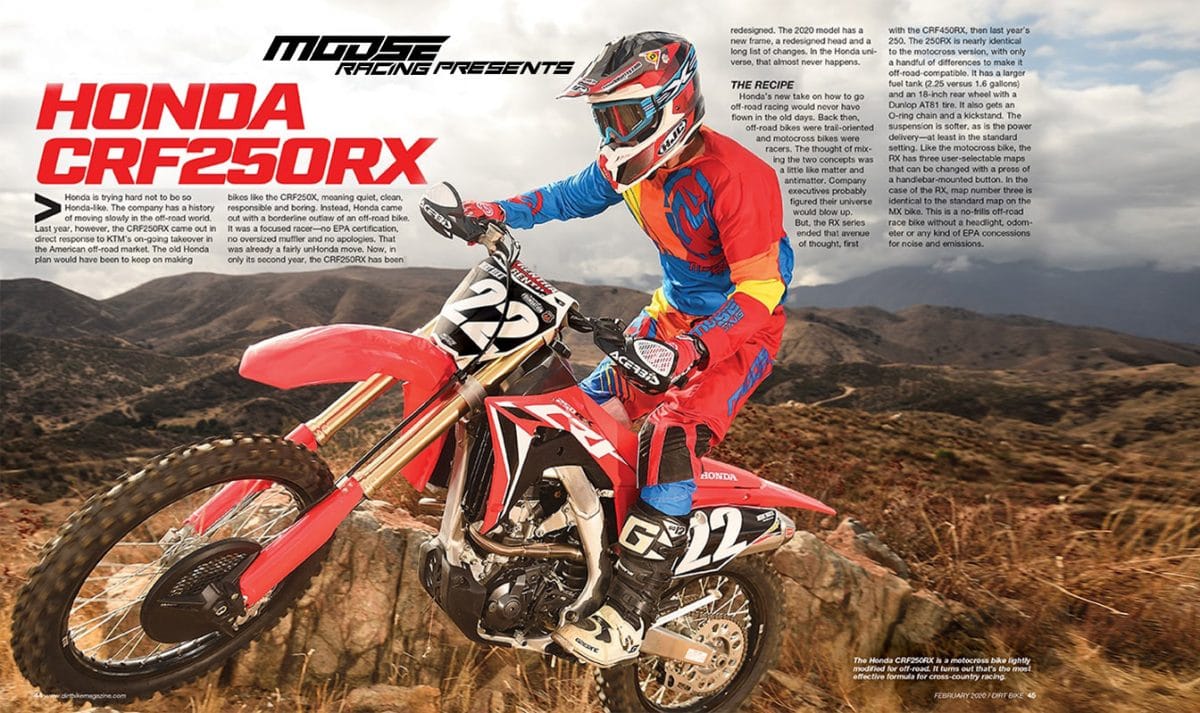 Last year the Honda CRF250RX came out in direct response to KTM’s on-going takeover in the American off-road market. The old Honda plan would have been to keep on making bikes like the CRF250X–meaning quiet, clean, responsible and boring. Instead, Honda came out with a borderline outlaw of an off-road bike. It was a focused racer—no EPA certification, no oversized muffler and no apologies. That was already a fairly unHonda move. Now, in only its second year, the CRF250RX has been redesigned. The 2020 model has a new frame, a redesigned head and a long list of changes. In the Honda universe, that almost never happens.

THE RECIPE
Honda’s new take on how to go off-road racing would never have flown in the old days. Back then, off-road bikes were trail-oriented and motocross bikes were racers. The thought of mixing the two concepts was a little like matter and antimatter. Company executives probably figured their universe would blow up. But, the RX series ended that avenue of thought, first with the CRF450RX, then last year’s 250. The 250RX is nearly identical to the motocross version, with only a handful of differences to make it off-road-compatible. It has a larger fuel tank (2.25 versus 1.6 gallons) and an 18-inch rear wheel with a Dunlop AT81 tire. It also gets an O-ring chain and a kickstand. The suspension is softer, as is the power delivery—at least in the standard setting. Like the motocross bike, the RX has three user-selectable maps that can be changed with a press of a handlebar-mounted button. In the case of the RX, map number three is identical to the standard map on the MX bike. This is a no-frills off-road race bike without a headlight, odometer or any kind of EPA concessions for noise and emissions. 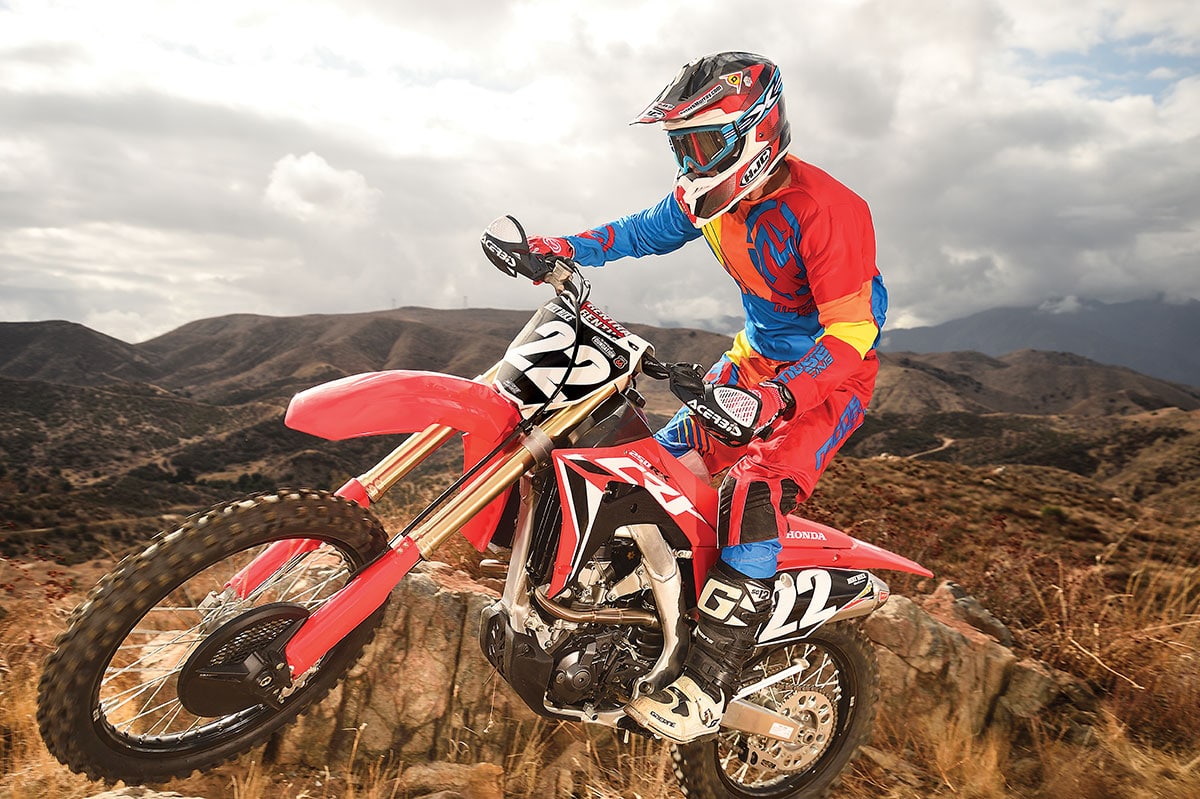 The Honda CRF250RX is a motocross bike lightly modified for off-road. It turns out that’s the most effective formula for cross-country racing.

THE REMAKE
This year Honda gave the RX all the same changes as the motocross version. The frame was made less rigid, and, if you look closely at the old one, you can tell they made room for a kickstarter, even though the motor had no such provision. That’s gone, and the swingarm was also reconfigured to be a little less rigid in some planes of motion. More important, the head was redesigned with a different-shaped combustion chamber. The exhaust cam has a new profile that opens the valves later and has reduced overlap. The system still uses the finger-follower design that Honda adopted in 2018 for the motocross bike. This uses tiny levers between the cams and the valves, and typically results in higher revs and more top-end power. For 2020, Honda also remapped the EFI system in all three user-selectable maps and gave the bike a larger air filter and an enlarged left radiator. Even the lower end is changed. Second gear is higher, and the clutch has 18 percent more surface area with stiffer springs. Honda also redesigned the muffler without a resonance chamber. Yes, the bike still uses two separate exhaust systems, stemming all the way from two separate exhaust ports to independent mufflers. They are identical to those of the motocross bike and have no spark arrestors.

RIDE ME, RACE ME
To some people, the thought of taking a motocross bike with so few changes straight into the off-road world is a little harsh. That’s definitely true in the 450 class, where just opening the throttle all the way is a challenge. It’s actually a much more agreeable concept in the 250 four-stroke world. The Honda motor is smooth and linear. Almost all 250 four-strokes are like that. There’s no big burst of power anywhere along the way, and it always seems to find traction. In fact, that overly smooth power delivery is what got the CRF250RX in trouble in its debut year. The original bike had very little low-end torque. It only made power if you revved the daylights out of it. Honda’s fixes for 2020 were partially effective. The new RX has a little more snap down low in all three maps. The standard setting, as signified by one flash of the indicator light on the handlebar switch, is still very linear and still revs to cosmic levels, but low-end power is still nothing to get excited about. It still makes most of its power up top, and you have to learn to scream it if you’re in a hurry. Map two (two flashes) is the mild map. Unfortunately, it doesn’t make any more bottom end, only the frantic nature of the high-rev zone is toned down slightly. In map three, you get a noticeable boost up top, but once again, there’s very little change down low. That means the bike is still a screamer, and you have to alter your riding technique accordingly. When you’re in race mode, your normal rpm level is a few thousand rpm higher than it would be on a larger bike. 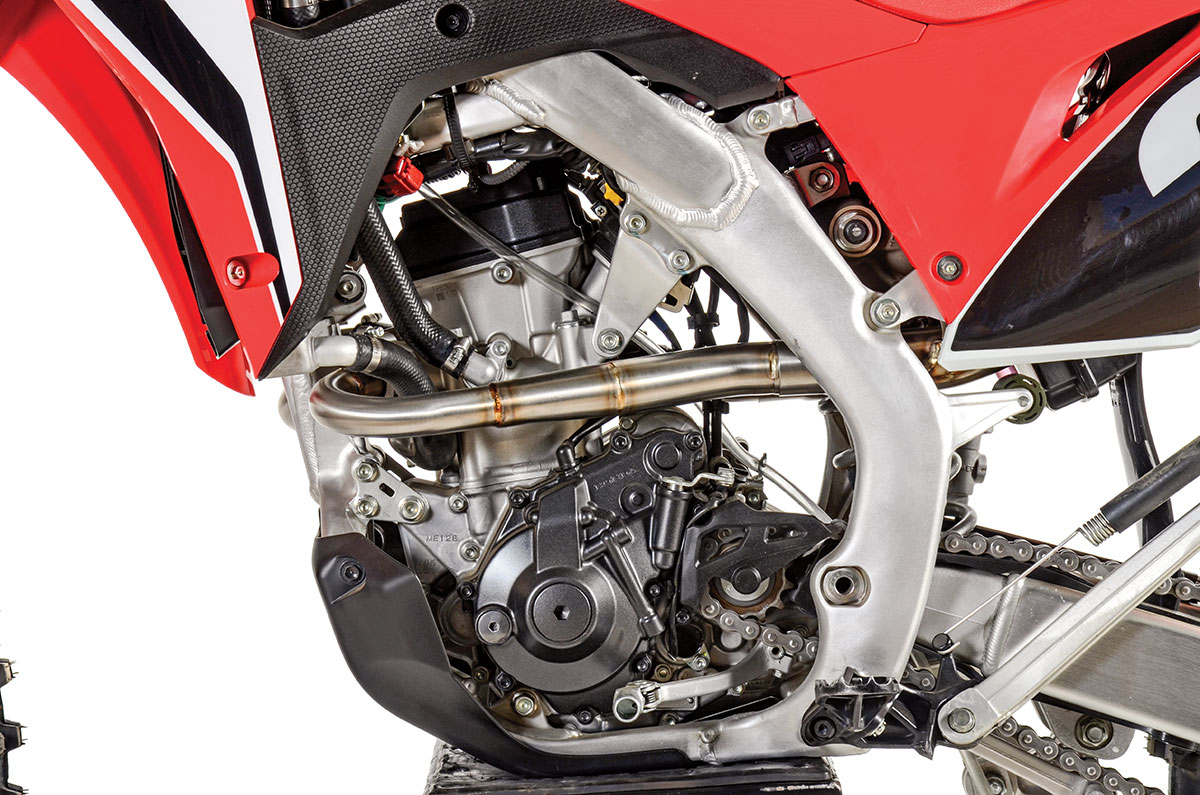 Having said that, the RX is still a blast to ride. It’s kinda fun to rev a bike when the power delivery is still linear and very controllable. You hold it on a little longer in each gear and hang on. The bike has plenty of power to climb anything you set in front of it, and traction isn’t an issue because the bike has a smooth, long and predictable power delivery. The fact that the bike’s overall handling is outstanding makes it even better. Just like the MX version, the RX has an agreeable nature. It’s super maneuverable and excellent in turns. The RX is about 8 pounds heavier than the motocrosser, weighing 235 pounds without fuel on our scale, mostly due to the kickstand and rear wheel. That might be heavy by MX standards, but it’s right in the hunt for an off-road bike of this level. In fact, most of the Euro 250cc two-strokes are actually a little heavier. 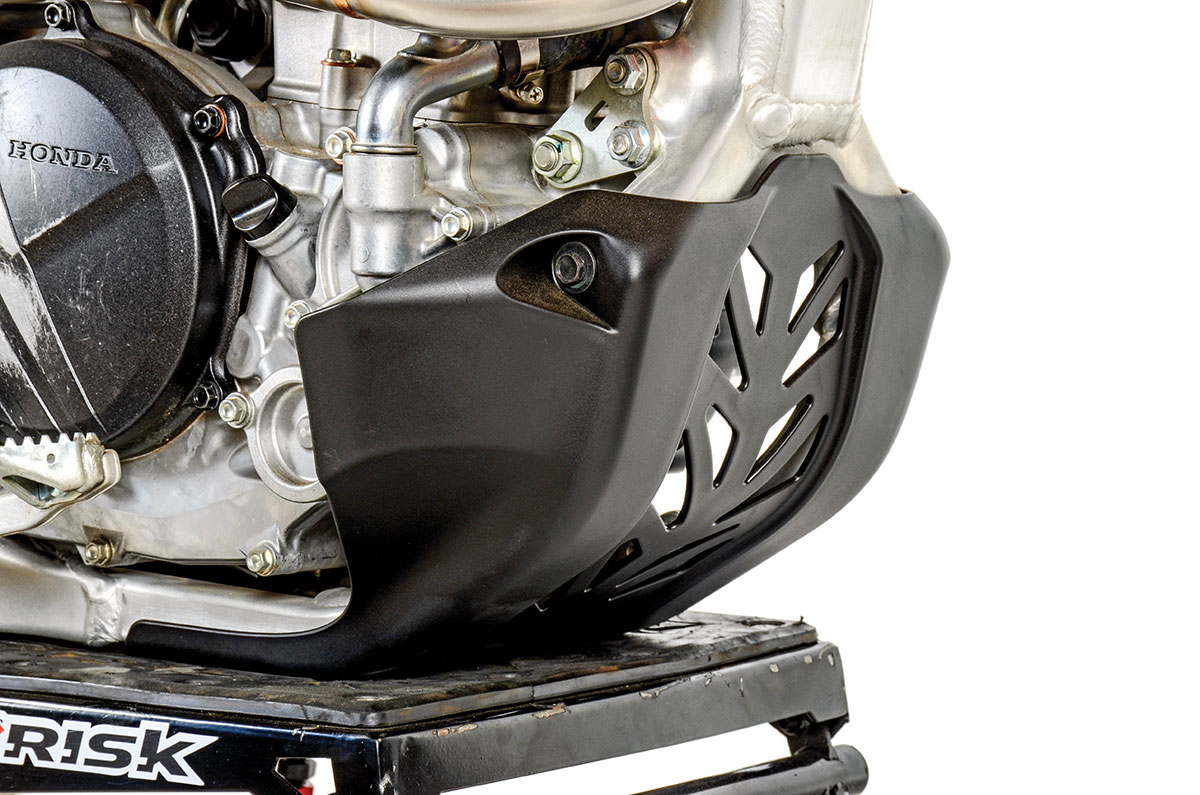 Another big win for the Honda is suspension. The coil-spring Showa fork and shock are excellent. Both are softer than their motocross counterparts, but not by much. They are designed for hard trail riding, so there isn’t much dive under hard braking, and the bike sits tall in its travel. Don’t expect an overly cushy ride, though. Compared to Honda’s more traditional trail bikes, like the now-discontinued CRF250X, the RX is firm. That’s appropriate considering the bike’s mission as a racer.

That mission is accomplished in style; this bike can deal with any off-road bike in the 250 class, two-stroke or four-stroke. It’s fast and probably the best-handling off-road bike available right now. But, it does leave an opening for a more trail-oriented off-road bike. The recently released Honda 250F ain’t it; that’s a budget bike for an entry-level rider. Someday, Honda will probably make a true 250 trail bike out of this platform, more like the original X. Until then, the RX can fill that gap, but it will be a little like putting a Bengal tiger on a leash and visiting the dog park. You won’t be fooling anyone. 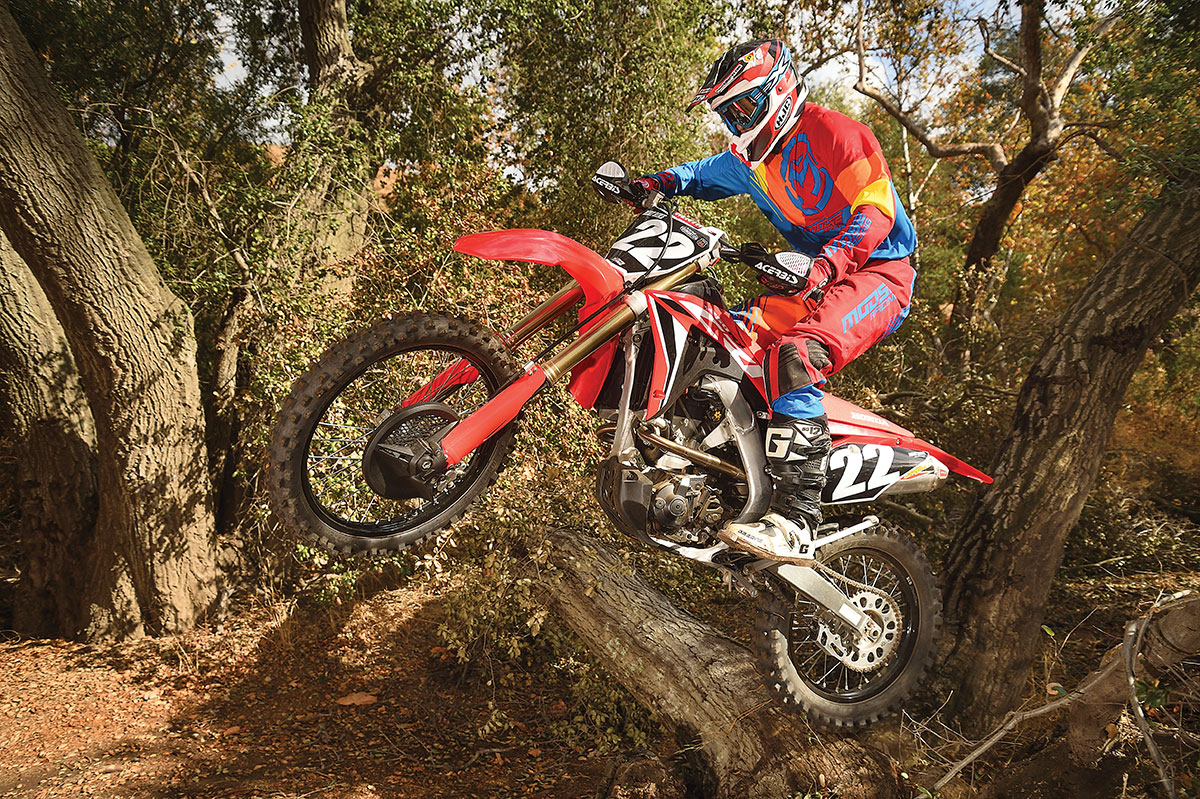 TRAIL TIME ON THE CRF250RX
Finishing the off-road transformation
The engineers at Honda expect owners of the CRF250RX to finish building it. As it is, the bike is still more motocrosser than off-road bike. As it turns out, that suits over half of the off-road riders in the country, who tend to ride MX bikes anyway. For the other half, the modifications required will depend on the bike’s application. 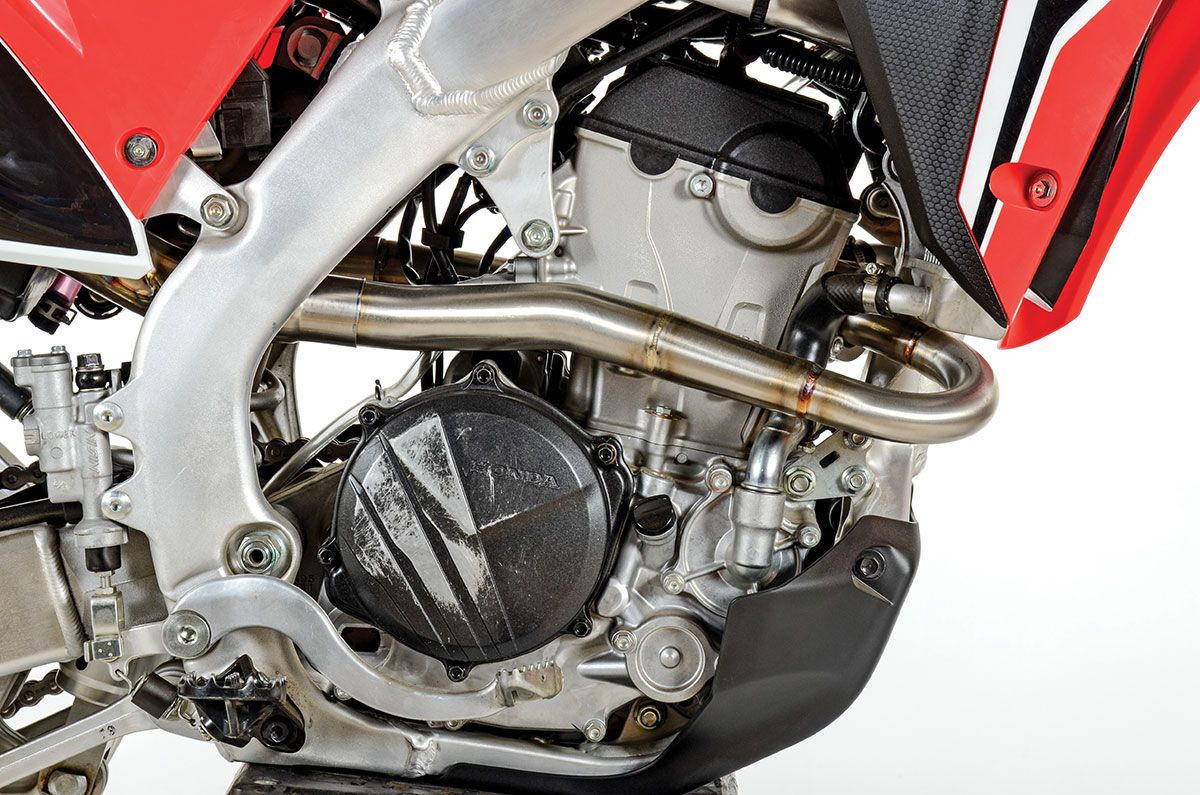 First things first, most public riding areas out west require a spark arrestor. We took our bike to the Prospector’s GP at Hungry Valley near Gorman, California, which is the only round of the National Grand Prix Championship that requires a spark arrestor. That’s a little problematic on the CRF250RX, because for some unknown reason, Honda decided to put two mufflers on the bike, doubling the cost for bolt-on spark arrestors. We decided to address one of the bike’s other shortcomings at the same time by replacing the whole exhaust system. A Pro Circuit T6 system includes two spark arrestors and is constructed of stainless steel, which is appropriate for off-road use. The bonus is that the system increases bottom-end power and hacks off a little weight. The price is high, but it’s virtually two separate pipes from head to tail. 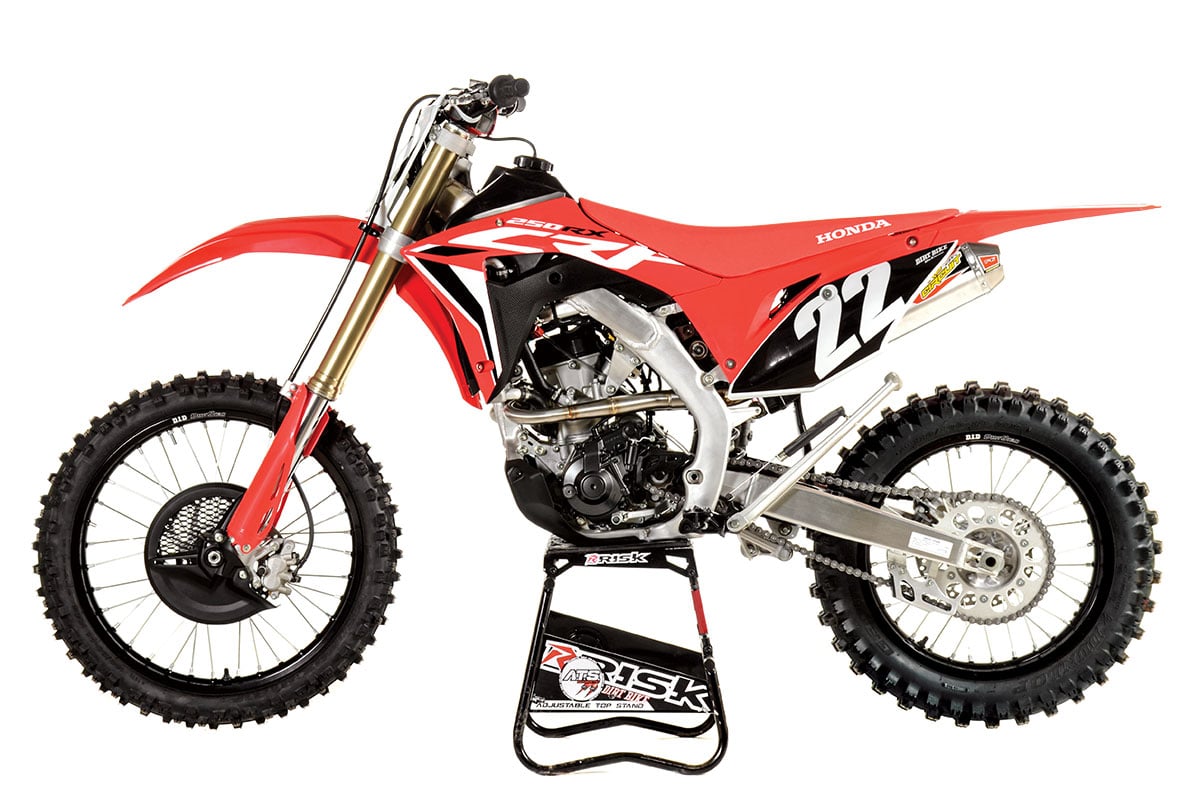 Honda didn’t supply handguards on the stocker, so budget that in as well. We installed Acerbis Uniko vented handguards. Then we went a little off the reservation. Like all motocross bikes, the Honda runs hot. If you use the clutch heavily on a warm day, chances are you’ll boil over at some point. Instead of installing a radiator fan, we addressed the issue more directly with a Boyesen Supercooler impeller. Boysen just developed this system specifically for the Geico motocross team and has had good initial success. We combined that with Evans waterless coolant, which virtually eliminates the boil-over issue.

You can easily keep going if you have a true desire to make the RX into a trail bike. IMS has a 3-gallon fuel tank. Trail Tech has instruments and lighting options, and there are various skid plates and guards from TM Engineering. We’re just getting started. Check in to see how far we go.

TAYLOR ROBERT BACK ON TOP OF WORCS ROUND 1