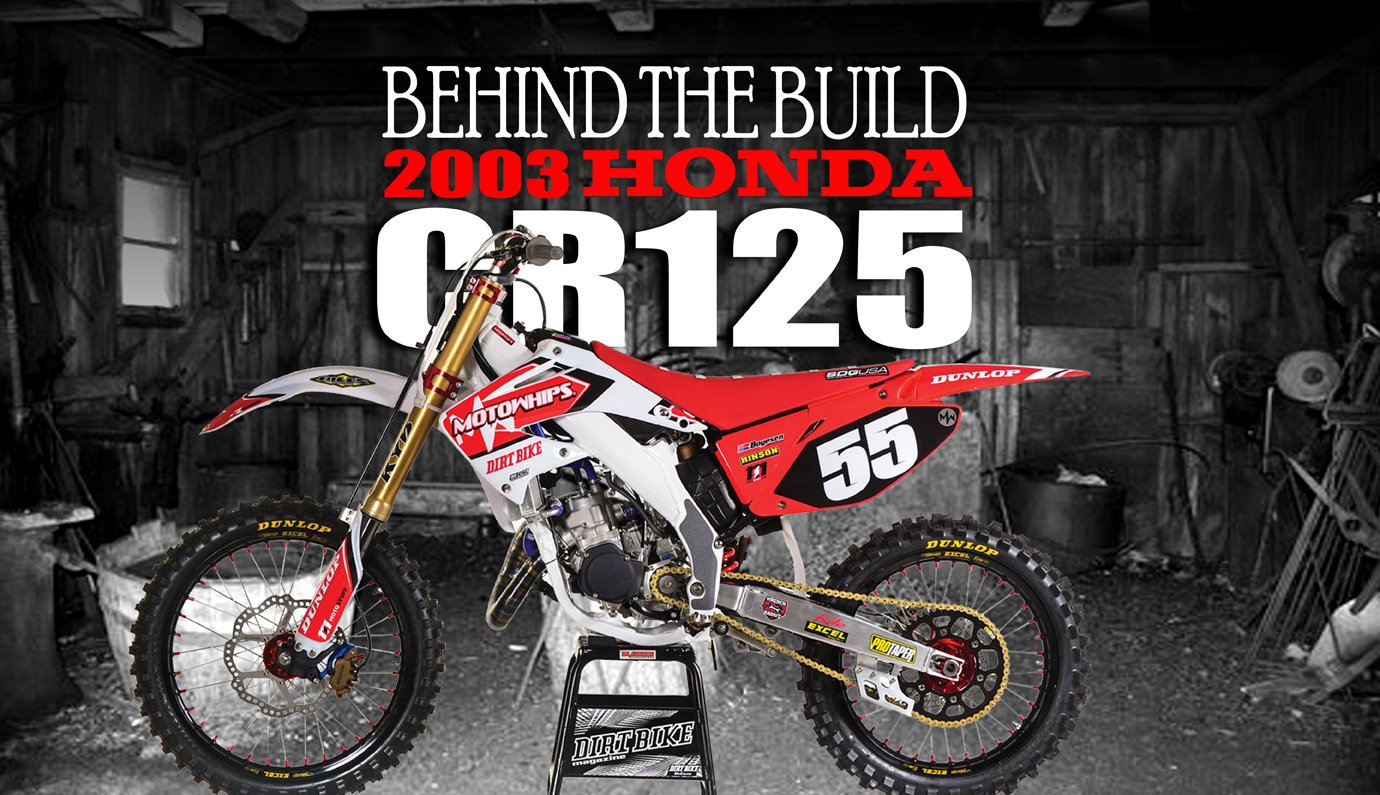 A remarkable 2003 CR125R is the subject of this week’s Behind The Build. What started out as a few pictures on a cell phone turned into an absolute work of art! We sent Justin Myerson at Motowhips images of a 2003 Honda CR125R frame, swingarm, radiators and a set of cases. A few days later, we were at the Motowhips headquarters in Southern California dropping off multiple boxes of parts that contained what we hoped was a complete 2003 CR125R. This machine was torn apart in 2006 and hadn’t been put back together since. This would be the fifth attempt to bring this Honda back from the dead, and let’s just say we didn’t have much hope. As a matter of fact, the only person truly excited about the boxes of parts was Justin Myerson.

The frame, center cases, swingarm, suspension and linkage were all on the bike when it rolled off the showroom floor in 2003. All the major parts were rebuilt and cleaned up but not replaced with new parts. The first order of business was to get an accurate inventory of what we had, which took about a week. Myerson had a vision in his head and began sourcing parts to make it a reality. Because the bike was already in pieces, the inspection and cleaning of everything started immediately.

The suspension got a complete overhaul. The shock body was hard-anodized a bronze color, and all the internal moving parts were akadized to reduce sticking. The same was done up front. We replaced all the internal seals, bushings and oils on both ends. While the suspension was apart, Dave Cruz installed stiffer springs that would help it stay higher in the stroke and re-valved both internally to match. The stock triple clamp was replaced with a Kite version.

The swingarm and linkage required many man-hours of attention. The linkage bearings had rusted themselves in place, so it required some heat to be applied and some very creative tactics to remove them. During this process not only were the bearings and seals replaced, but the linkage itself was smoothed out by hand. A similar process was performed on the swingarm. The main frame was powdercoated white, and the subframe was powdercoated black to match the color scheme Motowhips had chosen.

With the main chassis work done, Myerson turned his attention to the brakes. The front and rear brake master cylinders and rear caliper were completely dismantled. While they were apart, the sight glasses were removed and welded over. The master cylinders and rear caliper received a bronze Cerakote finish and were all rebuilt using kits from All Balls Racing. The front caliper was replaced by a one-piece billet-aluminum unit featuring a larger aluminum piston design from Moto Stuff and a 270mm oversized front rotor kit. The brake lines were also upgraded with steel-braided versions from Core Moto.

The CR125R powerplant received the same attention to detail as the chassis. Before the engine was rebuilt using a Wrench Rabbit kit, the cylinder was sent off to Millennium Technologies to be repaired. While at Millennium, the decision was made to go with the 134cc big-bore cylinder, and in-house engine builder Tom Morgan did some porting and head modifications. This machine would run on VP C-12 from here on out.

Before being reassembled, the center cases were scrubbed by hand using a technique similar to the one used on the linkage and swingarm, with the power-valve cover, water-pump cover, clutch cover and right-hand-side outer case receiving colored Cerakote finishes. A complete billet-proof Hinson clutch was installed for durability, along with blue Samco silicone radiator hoses. Motowhips also installed one of its handmade aluminum recovery catch tanks. The OEM radiators were used and got the Motowhips clean-up treatment. VP C-12 race fuel would now be fed through a completely rebuilt Mikuni carburetor and a Boyesen Rad valve intake system. Finishing touches in the performance department came from Bill’s Pipes in the form of a completely custom one-off hand-built cone pipe and custom carbon fiber silencer. The exhaust was spec’d out by Jeff Spencer to match the specific engine modifications.

Almost every fastener (including the axles, swingarm pivot and linkage bolts) on this build came directly out of Mettec’s manufacturing facility in Carson City, Nevada, and was made from titanium. Yes, that includes the engine case bolts. The Pro Pegs are also made of titanium and imported by Moto Stuff. For wheels, we used Kite billet-aluminum hubs, stainless steel spokes, aluminum nipples anodize red to match the hubs and black Excel Takasago rims. We wrapped those with Dunlop MX-3 tires.

The finishing touches on the Motowhips CR125R build came via R-Tech plastics, an SDG complete seat with gripper cover and a custom Decal Works graphics kit.

The attention to detail on this project CR125R built by Justin Myerson from Motowhips is off the charts! This is one of the best-looking project bikes that the Dirt Bike staff can remember being involved with. The machine is truly a work of art, but we do have one major problem with it—it looks so good that nobody wants to scratch it up, so no one will ride it! Okay, that’s not true. Actually, there is a long, long line of people who would do anything to ride this machine. Justin Myerson built a machine that looks good and works just as well. The engine is a screamer and is a blast to ride. The stopping power would rival that of any modern-day 250 or 450 motocross model. We love all the Mettec titanium fasteners. They really take the build to a completely different level.

This build was definitely challenging from the start, but the finished product just blows people away—the Dirt Bike staff included!