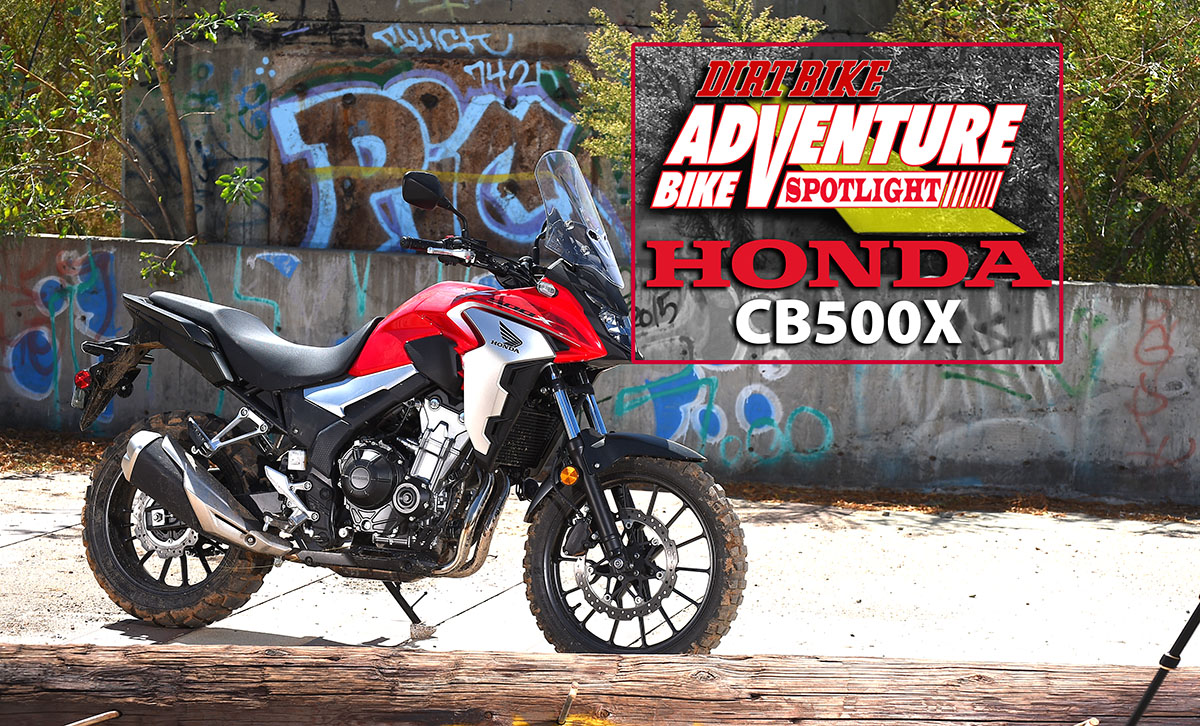 The Honda CB500X should be called something else now. To give it the same name as the budget street bike from 2013 is just plain confusing. Back then, the bike had one big thing going for it—price. Now, it has much, much more and can be counted among legitimate adventure bikes, plus it still has a good price. The interesting part is that Honda didn’t have to redesign the whole bike to make it legit, but it has some important changes that go a very long way.

BUDGET ADVENTURE
Everyone knows the big problem in the adventure bike world. It’s expensive. To a certain crowd, that’s part of the appeal. They like showing up at Starbucks with the most expensive motorcycle in the parking lot. Other riders live the adventure lifestyle and want a bike that can cover great distances on- or off-road. They see the threshold price as a necessary evil. But, lately there’s been a movement to make the concept more affordable, and the CB500X is one way of doing it. The bike sells for $6699. A Yamaha YZ125 is about the same price, whereas a Ducati Multistrada is almost four times as much. The CB500X is built in a Honda factory located in Thailand, which is the current recipe for making more affordable bikes. 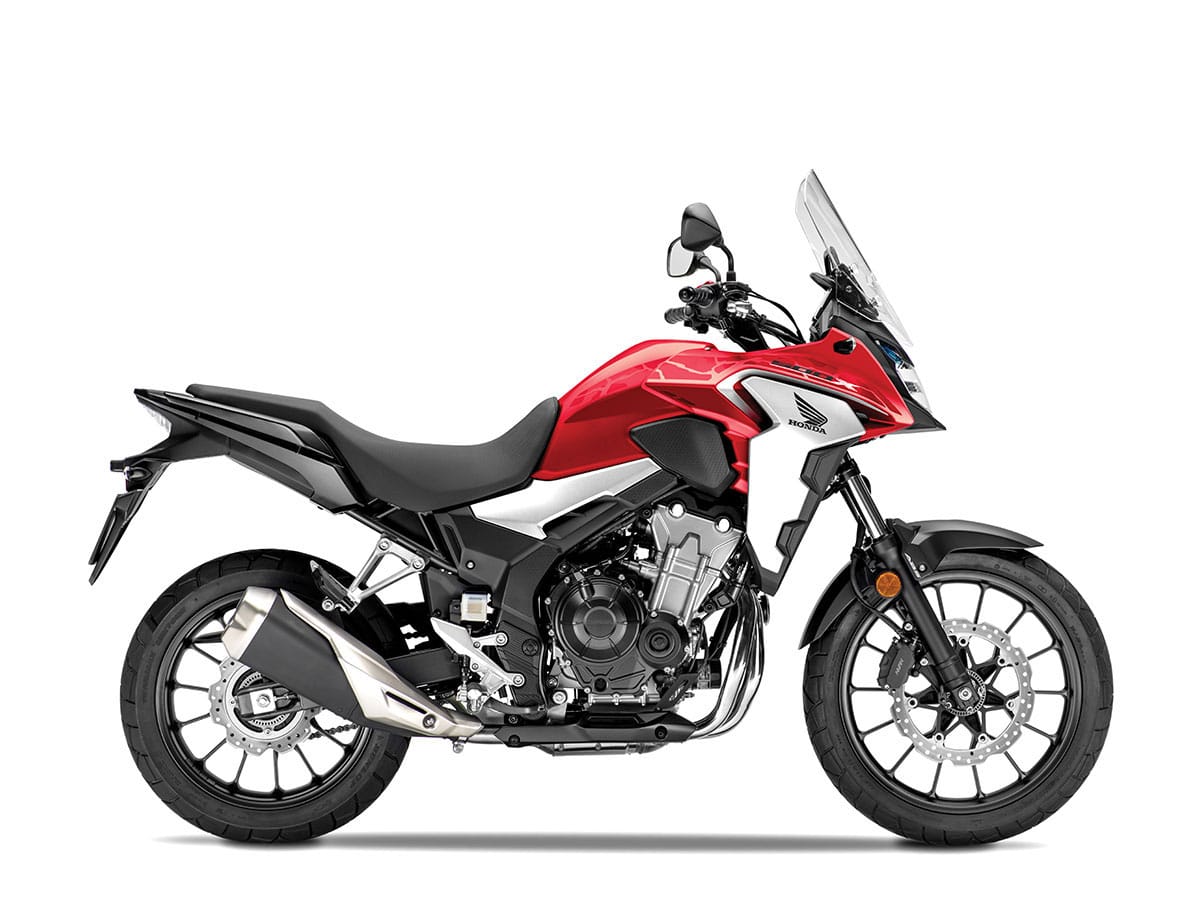 In its 2013 incarnation, the CB500X had two 17-inch cast wheels and under 5 inches of rear suspension travel. It was still more or less legit as an adventure bike, because the rider layout was dirt-friendly and it was reasonably light—right around 420 pounds. We know, full-time dirt riders are cringing at the notion that a 400-pounder is light, but compared to other twin-cylinder bikes, the CB500X wasn’t bad. What it didn’t have much of was performance. The motor was so-so, and the suspension was just flat inadequate in the dirt. Moving on to 2019, the people at Honda had become much more adventure-conscious because of the success of the Africa Twin, and it probably embarrassed some in-house enthusiasts that the CB500X didn’t bear any family resemblance, thus the X got a remake. The rear-suspension travel was upped by over an inch with a beefier shock. The fork got 41mm tubes with a 0.4-inch increase in stroke. The steering head angle was increased from 26.5 degrees to 27.5 degrees. The wheelbase was increased by an inch, and the front wheel was upped to a 19-incher. Just as important, Honda engineers found a little more performance. This is probably a sensitive issue internally, because the 500 is designed to come in around 50 horsepower for insurance regulations in Europe. Changes to the intake, the cams and the EFI system resulted in more torque, but the peak power rating still won’t raise any bureaucratic eyebrows. It’s not a revver by any means. The motor remains a 471cc, DOHC parallel twin with a 180-degree crank.
The bike also got a new look, new instruments, a narrower seat and a slipper clutch. You can get it with anti-lock brakes for another $300.

DIRT PLAY
How dirty is the new CB500X? It’s all about your frame of reference. If you take the new CB500X on a trip with a friend riding a 2013 model, he probably won’t be your friend anymore. The new bike does everything better. Honda only claims a 6-percent increase in torque, but it sure seems like more than that. The motor is very responsive, even to the point of having a little hit down low. The increase in ground clearance is probably the single biggest improvement in the dirt. It isn’t enough to send you looking for logs to ride over, but it’s much less vulnerable to rocks and debris flying off the front wheel. The bike has a curiously exposed oil filter and other parts that probably should be protected with aftermarket accessories. The overall width of the engine isn’t bad. You can wiggle it through a 2-foot gap without much trouble.
The suspension is a welcome improvement, too, but it’s still very soft. And even though it has limited preload adjustment, you simply can’t hit rough patches at speed. The dirt-road obstacle that commonly catches adventure riders by surprise is what Baja guys call the “vado”—basically a ditch. You have to keep the CB500X at a reasonable velocity, any sudden ditch, washout or rut will make it bottom hard. The overall layout is still pretty good in the dirt. When you stand up on the pegs, the oversize rubber-mounted bars feel like they’re in the right place, and the width of the bike between your knees is about right.
The biggest complaint that dirt riders will have is that getting up into the standing position is difficult because the pegs are high and the seat is low. The footpegs are mounted a little too far rearward, and they’re ridiculously narrow. More aftermarket shopping will be necessary. Our test bike had Bridgestone Battlax tires with a more aggressive pattern than the stock Dunlop Trailmax rubber. That, of course, improves the bike’s off-road capabilities dramatically. It still has cast wheels, which are not an especially good idea in the dirt.

STREET CRED
The Honda is just powerful enough to be at ease on a real road trip. It can cruise at 70 mph all day without feeling like it’s straining. It’s still no liter bike. If you want to pass a big truck, give yourself a lot of room. The bike is comfortable with very little vibration and good wind protection. The windscreen is actually adjustable. So long as you have an Allen wrench handy, you can raise it almost an inch. As far as range goes, the 500 is about average. It has a 4.6-gallon tank and generally gets around 50 mpg. There are some oddly un-Honda-like pieces here and there. When Honda lengthened the suspension, it didn’t provide a longer kickstand, so it’s a leaner.
Honda is clearly hoping to move in on some of the customers left behind by the departure of the Kawasaki KLR650. The price is the same, and it has a much stronger motor. It lacks the big luggage rack and enormous tank, plus it’s a much heavier bike, so it’s not a perfect match. But, it’s close enough to expose more people to that life. If they love it, they can move on to bikes such as the Africa Twin. For some, the CB500X will be a legitimate destination on its own.