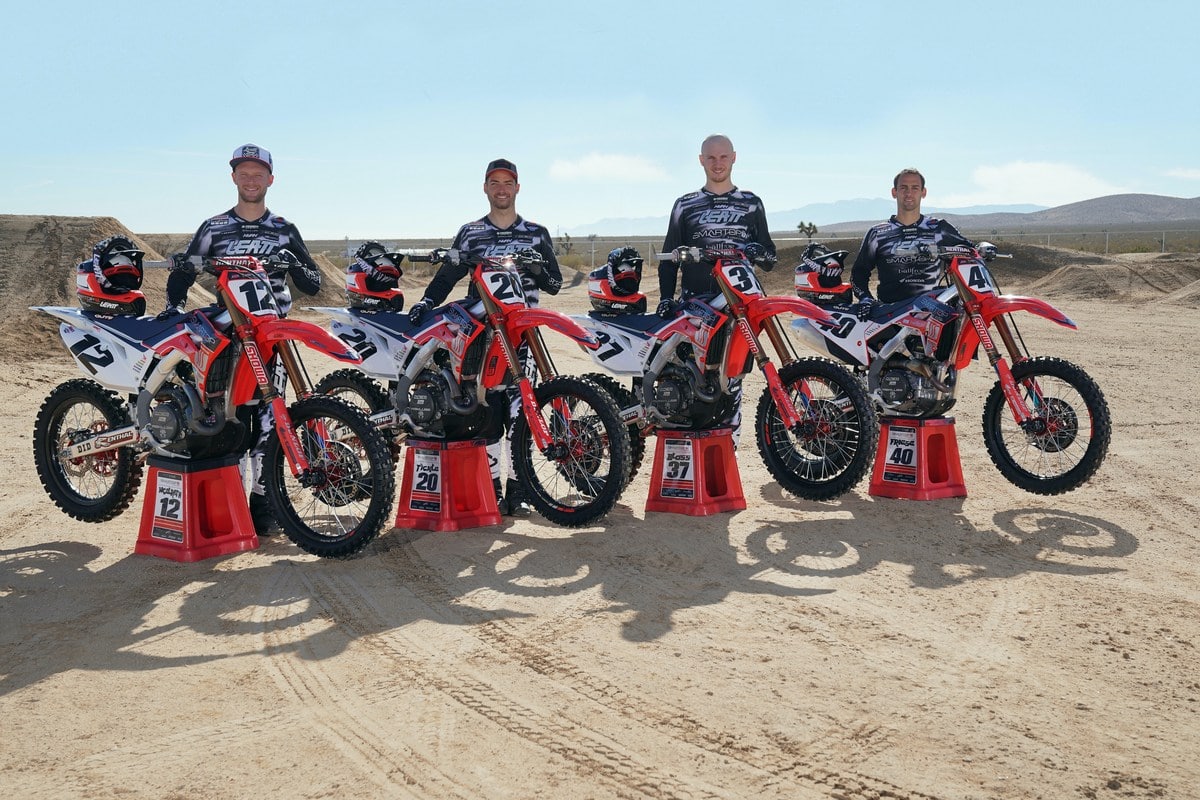 With the opening round of the AMA Supercross series set to take place this Saturday, and one week after presenting its factory Team Honda HRC effort, American Honda today confirmed its support teams for the series.

The Mike Genova-owned and Tony-Alessi-led Smartop/MotoConcepts/Bullfrog Spas Honda team’s 2021 roster comprises four riders, all of whom will enter the 450SX class aboard CRF450R race machines in AMA Supercross. The 2011 250SX West Champion, Broc Tickle earned a top-five result in the 2012 AMA Pro Motocross 450 final points standings and has posted podium race finishes in the premier class. Although his progress was hindered by a forced two-year hiatus, last year saw him place 10th in the AMA Pro Motocross 450 final standings. Vince Friese is a longtime rider for the team and is known for his strong starts and development prowess, while Benny Bloss is a veteran 450 rider with exceptional whoop speed. Shane McElrath has a long list of 250 accomplishments and was the runner-up in last year’s 250SX East Region series and third in the AMA Pro Motocross 250 series. Although he recently suffered a shoulder injury and will miss the first three rounds in Houston, he hopes to return in time for the first Indianapolis round, on January 30.

Michael Lindsay’s FXR/Chaparral Honda Racing effort enters its second year of racing, with a two-rider AMA Supercross component focused on the 250SX West division, which starts February 20 in Orlando, Florida. Coty Schock enters his second year with the team, with his best 2020 result being a 10th overall 450 finish during the final AMA Pro Motocross round, at Fox Raceway. Carson Mumford came up through Factory Connection’s amateur program before transitioning to their professional squad in late 2019. Last year saw him campaign the entire AMA Pro Motocross series, finishing 12th in the final 250 points standings. In AMA Pro Motocross, Schock plans to compete in the 450 class, whereas Mumford will race in the 250 division outdoors.

David Eller’s Phoenix Racing Honda squad, which this past weekend began a defense of its 2020 AMA Arenacross crown, will campaign the entire AMA Supercross series this year, with Josh Osby and Enzo Lopes racing in the 250SX East Region and reigning AMA Arenacross champ Kyle Peters in 250SX West.

“We’re very pleased to be partnering with a strong lineup of support teams representing Honda in all three AMA Supercross classes this season,” said Brandon Wilson, Manager of Advertising and Motorcycle Sports at American Honda. “MotoConcepts, Muc-Off Honda, FXR/Chaparral Honda and Phoenix Honda all have solid operations and talented rider lineups, so we expect to see a lot of Red Riders on the start gates and near the top of the results sheets in 2021.”