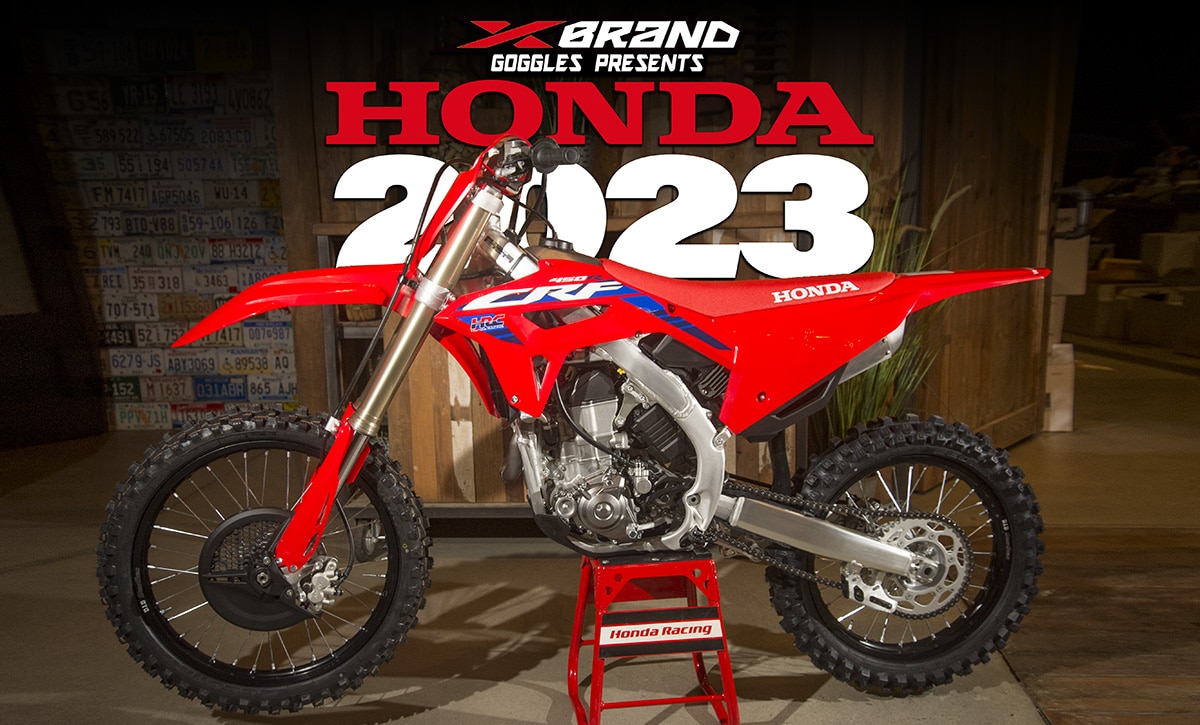 Honda has shown its MX and cross country bikes for 2023, and the line up includes significant changes for the CRF450R as well as a special edition that celebrates a 50-year-old legacy. MX bikes included in this release are the CRF450R, the CRF450RWE, the CRF450RS, the CRF250R, the CRF150R and the 50th Anniversary 450 special. Other models shown include the CRF450RX, which also got motor and chassis updates. The CRF250RX, the CRF450RL dual-sport and the CRF450X are unchanged. The official Honda press release is below:

Celebrating five decades of elite motocross heritage, Honda today unveiled the latest edition of its flagship motocross bike, the 2023 CRF450R, during a media event. Held on the eve of the opening 2023 AMA Pro Motocross round at Fox Raceway, the function featured the entire Team Honda HRC lineup – Ken Roczen, Chase Sexton, Hunter Lawrence and Jett Lawrence – as well as Honda legends from the past, including champions Gary Jones, Johnny O’Mara, Rick Johnson and Trey Canard, as well as former Team Manager Dave Arnold.

“Honda is synonymous with motocross, and that’s a direct result of our dedication to the sport for the past five decades, as well as the invaluable contributions of top riders – from Gary Jones in 1973 to Jett Lawrence in 2022,” said Brandon Wilson, American Honda Manager of Sports & Experiential. “The 2023 CRF450R is worthy of that heritage, and the 50th Anniversary Edition pays tribute in a way that we’re sure will be appreciated by motocross enthusiasts. We look forward to current and future Honda champions continuing to grow our motocross legacy.”

For 2023, The CRF450R’s engine and chassis updates also carry over to the premium CRF450RWE and the closed-course off-road-focused CRF450RX, raced by the SLR Honda and JCR Honda teams in the NGPC and WORCS competition.

While Honda celebrates 50 years of motocross heritage with the 2023 CRF450R, the rest of Honda’s popular CRF Performance lineup, including the CRF450R-S, CRF450X, CRF450RL, CRF250R, CRF250RX and CRF150R, continues to deliver industry-leading performance and reliability. 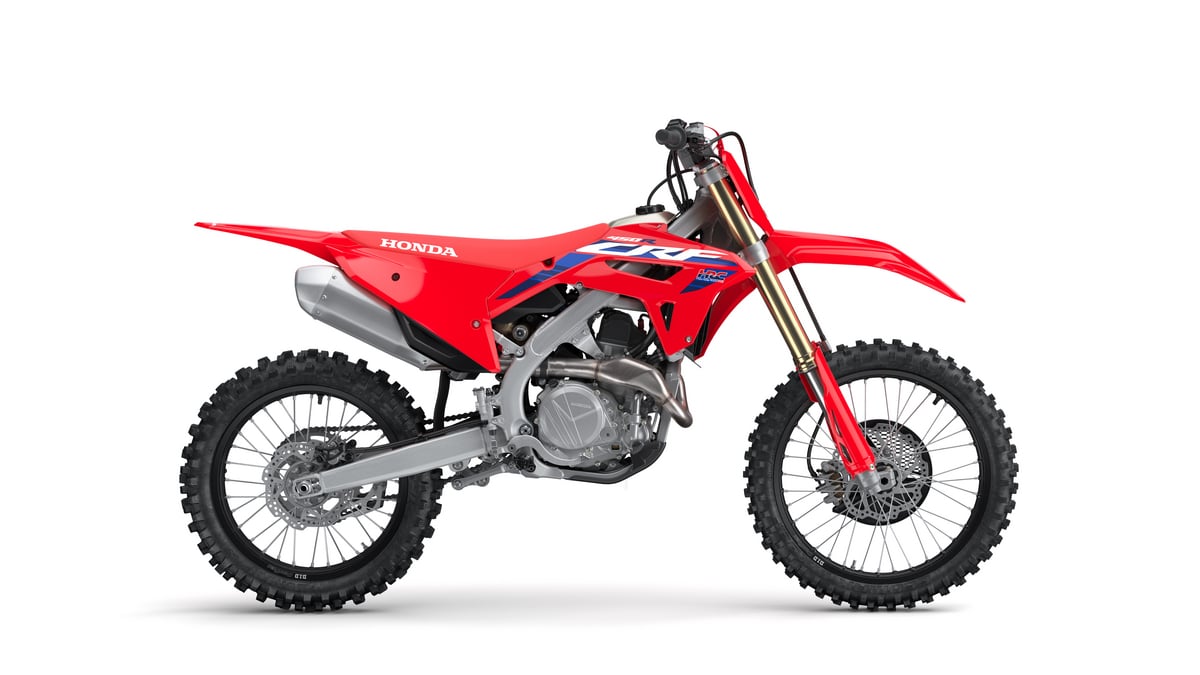 The CRF450R’s technical updates include a narrower intake-port shape and longer intake funnel, revised cam profile and smaller throttle body diameter, resulting in smooth power delivery and increased torque, improving acceleration out of corners. The frame’s rigidity has been optimized by increasing material thickness in strategic locations and the use of steel engine mounts (replacing aluminum) helps improve front-end traction. A higher-rate shock spring and revised fork settings complement the rigidity-optimized frame without introducing harshness. To enhance strength and reduce noise, the muffler body is constructed from heat-treated aluminum, and a new inner-pipe design is used.

From high-speed NGPC and WORCS tracks to the technical woods riding of GNCC, the CRF450RX is a versatile, yet refined machine that is perfectly equipped for the variety of terrain found in closed-course off-road racing. To improve corner-exit acceleration and handling, this model receives the same chassis and engine updates as its motocross-focused relative, the CRF450R. Built with off-road specific features like dedicated ECU and suspension settings, an 18-inch rear wheel, an aluminum side stand, a large 2.1-gallon fuel tank and hand guards, the championship-proven CRF450RX is ready for the track or trail, which is why it’s the motorcycle of choice for a variety of off-road racers, including the SLR Honda and JCR Honda teams.

Honda’s flagship motocross machine – the CRF450R – continues to push the technological envelope in an effort to stay at the front of the pack, but some customers prioritize value. Honda addresses the needs of both groups, as the CRF450R-S (based on the 2022 CRF450R raced by factory Team Honda HRC riders Chase Sexton and Ken Roczen) is available at a very attractive price point without making a big sacrifice in terms of performance.

The undisputed King of the Baja 1000, Honda’s bulletproof CRF450X has a record 15 wins in the legendary off-road event, the most recent coming in the 2021 edition at the hands of SLR Honda riders Justin Morgan, Mark Samuels, Kendall Norman and Brandon Prieto. Also campaigned in the AMA NHHA series by JCR Honda rider Preston Campbell, the CRF450X is an excellent trail machine too, thanks in part to its 50-state year-round off-road-legal status, plus off-road-appropriate features like a side stand, 18-inch rear wheel, headlight, sealed chain and six-speed transmission.

A quintessential dual-sport machine, the CRF450RL is based on the legendary CRF450 Performance off-road platform, yet it’s surprisingly smooth and comfortable on pavement. That combination of characteristics means there’s nothing better at using asphalt to link together great sections of trail. Features like a quiet muffler, a vibration-damping urethane-injected swingarm and a wide-ratio six-speed transmission ensure the machine performs well on roads, while the 449 cc Unicam® engine, twin-spar aluminum frame and premium, long-travel suspension that make it a stellar performer in the dirt. Throw in Honda’s legendary durability, and it’s clear why the CRF450RL has made a name for itself in the dual-sport world.

Long the standard by which quarter-liter motocrossers are measured, the CRF250R has accumulated an enviable list of championships over the years, and it’s consistently among the top sellers in its class. Noted for its exceptional handling (thanks in part to a narrow layout and low weight), excellent acceleration (achieved through notable torque and low- to midrange power) and endurance over race distance, the current platform was used by Team Honda HRC’s Jett Lawrence to capture the 2022 AMA Supercross 250SX East Championship. Its performance and durability also make it a popular choice among privateers, as evidenced by the high ratio of Red Riders on start lists in 250SX Regional racing.

Now in its second generation, the CRF250RX is an excellent choice for professional closed-course off-road racers, with SLR Honda’s Tallon LaFountaine having raced it to the 2021 AMA NGPC Pro II National Championship and the WORCS Pro 250 title. Also campaigned in GNCC and U.S. Sprint Enduro competition by Phoenix Racing Honda riders Cody Barnes and Ruy Barbosa, the model is based on the motocross-focused CRF250R, but tailored for woods racing, off-road grand prix competition, desert racing and trail riding in legal off-road areas, thanks to application-specific features that provide appropriate suspension performance, power delivery, fuel range, hand protection and convenience. 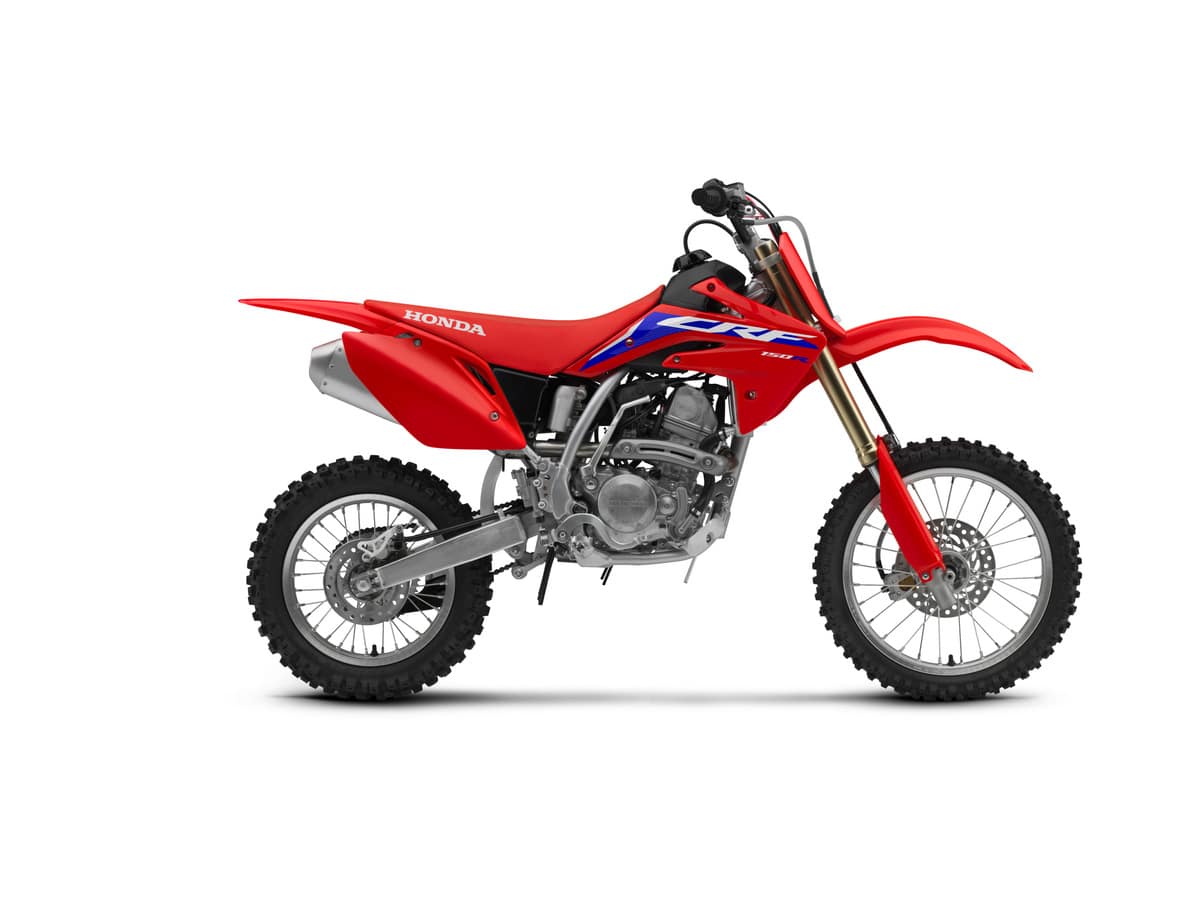 The top-selling mini motocrosser in its class, Honda’s CRF150R is offered in both standard and Big Wheel versions, the latter a great choice for taller riders thanks to its larger wheels, higher seat and additional rear-suspension travel. While the model is Honda’s smallest motocross machine, it boasts big-bike features like Showa® suspension (a 37 mm inverted fork and a single shock mated to a Pro-Link® rear system), plus a Unicam four-stroke engine that is unique in the mini MX world, delivering a strong but smooth spread of power across the rev range.