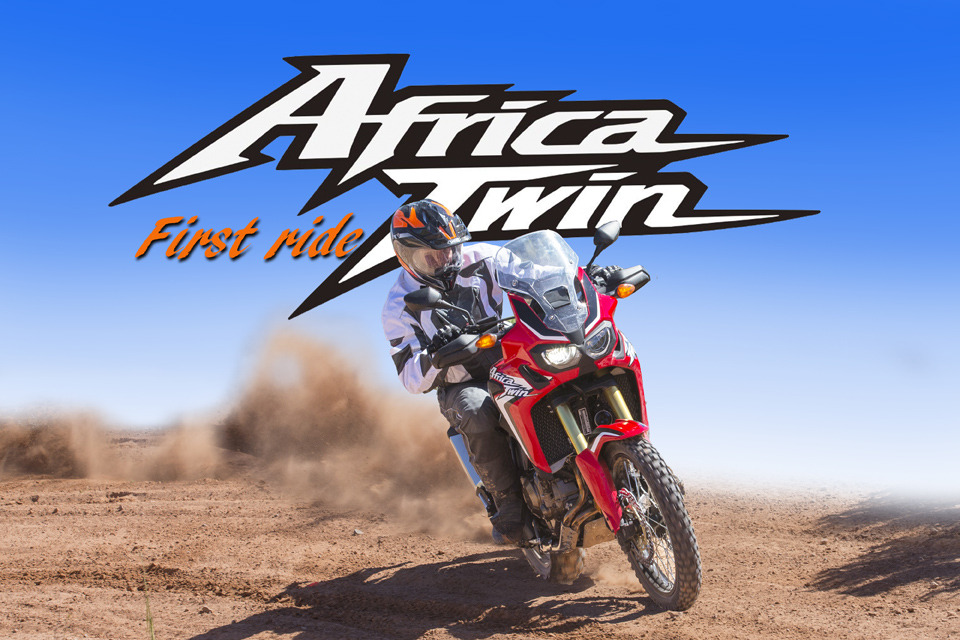 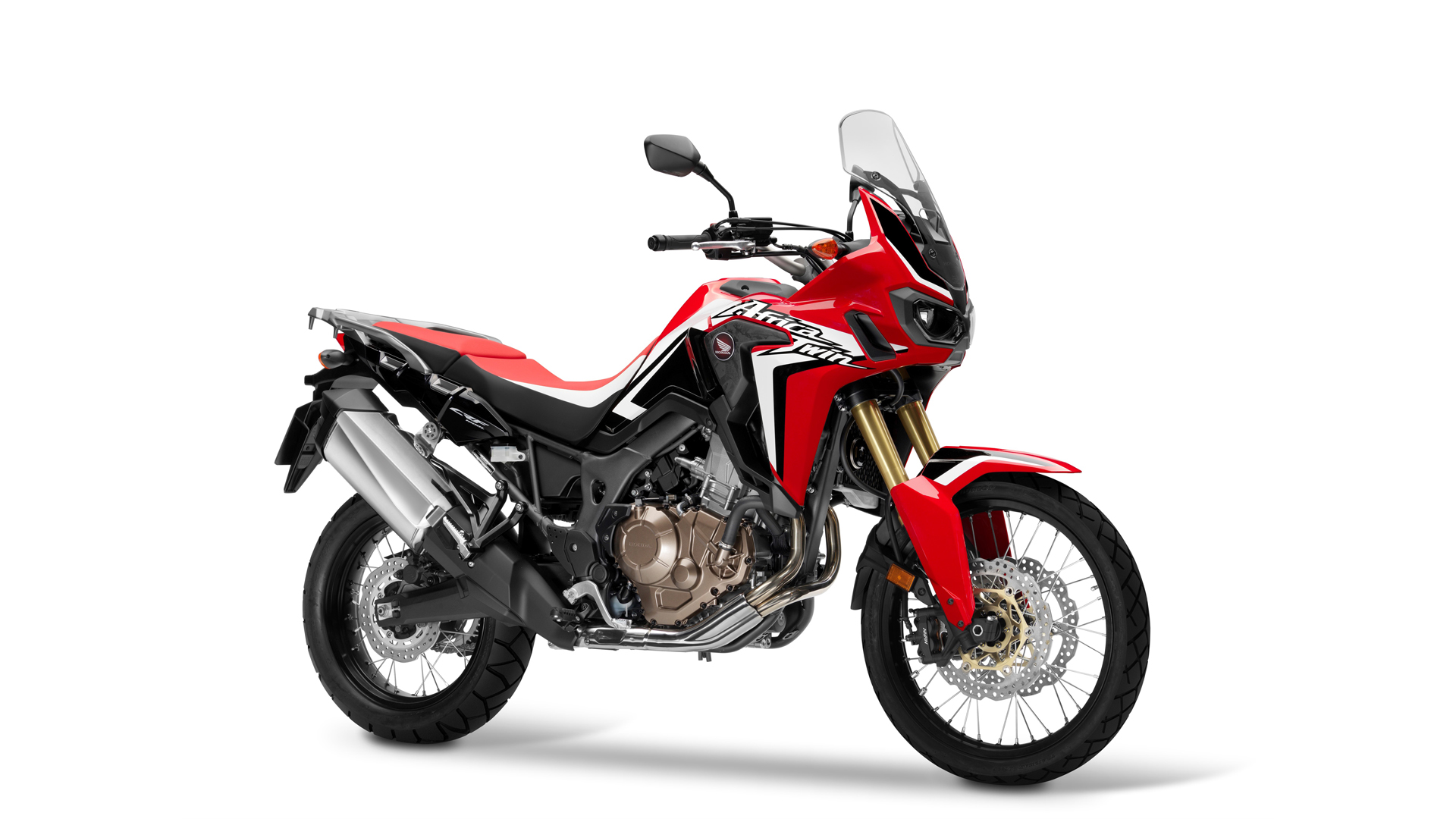 Honda released the Africa Twin to the press in Moab, Utah this week, where we spent two days riding it both on- and off-road.

It’s clear that Honda understands the adventure-bike rider’s mentality, because the Africa Twin is pretty much right on target. It’s a powerful, comfortable street bike with practical off-road capabilities. By off-road, we mean dirt roads, sand, rocks and everything just short of true single-track. Honda had the advantage of arriving on the scene after the Yamaha Super Tenere, the BMW R1200GS Adventure and the KTM 1190, which had upped the bar, step by step over the last three years. So the Africa Twin is lighter and narrower than any of those, and it has the most sophisticated traction control yet. The one area where Honda is in front of the class is in its automatic shift technology. The Africa Twin offers the DCT (Dual-Clutch Transmission) as an option. This has been already seen on Honda’s ATVs, UTVs and on some street bikes, but its application to the off-road world is new.  This takes away the clutch lever and shift lever, leaving you with computer-controlled shifting through the six-speed gearbox. In any given speed, one clutch is engaged while the secondary clutch has the next anticipated gear ready. When the computer decides the time is right, the two clutches transfer the power from one set of gears to the other, almost seamlessly. There are a total of four “modes” that can be pre-selected to tell the computer how high you want to rev out before each shift, or you can use triggers on the left grip to paddle-shift on your own.

At first, we didn’t think we would like having a computer babysit us. It turned out to be awesome. Low speeds are always challenging on big adventure bikes, and not having to worry about the clutch makes life much, much easier. A bonus feature is that the tall first gear that plagues all adventure bikes simply isn’t an issue with an automatic clutch. 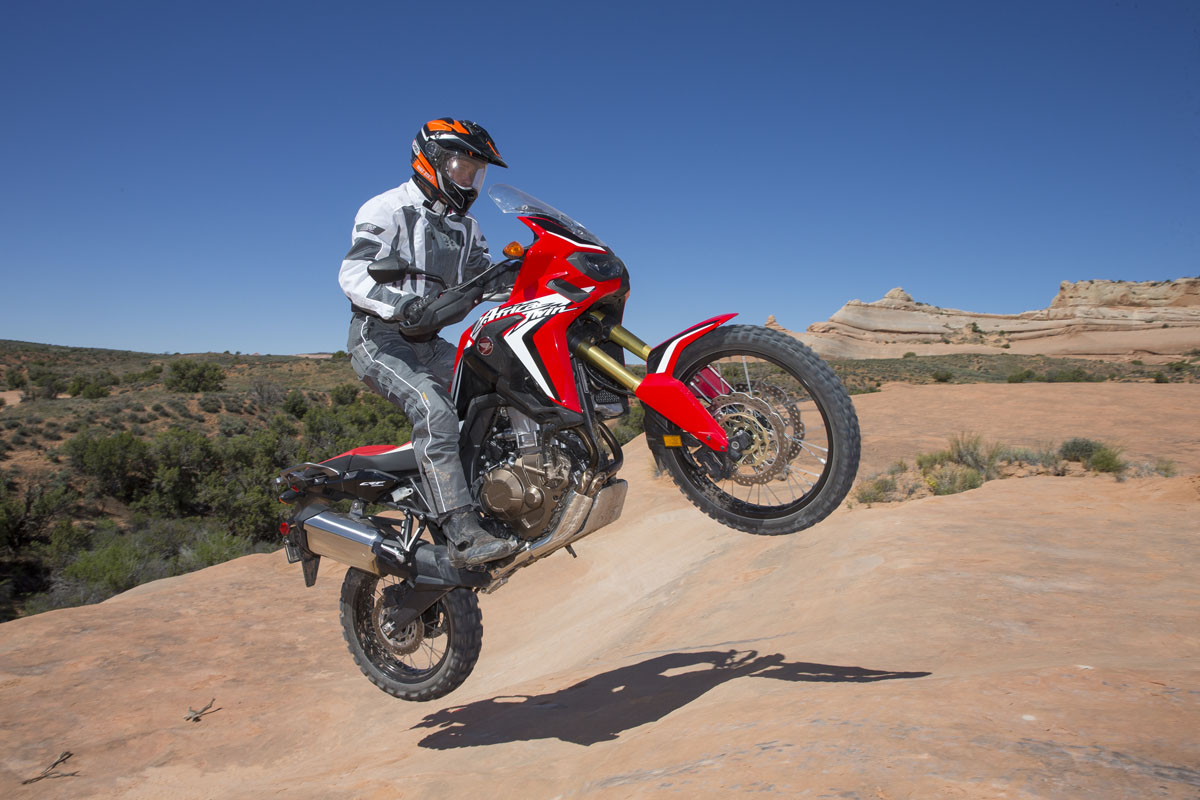 Traction control can be tailored with another trigger on the left. In the default position, the bike stumbles and stammers anytime the rear wheel breaks loose. That’s only useful on the street. Once you go off road, you can change to any of three settings or just turn the system off, all on the fly. On flat dirt roads, setting three is workable, but you still can’t use power to slide around a turn. Setting two lets you get away with a little flat-track action, but if you get into sand, you’ll still get stuck. Setting one is the most practical. You can back ‘er into turns and the computer only intrudes when the wheel is spinning wildly. Sometimes that’s fun, too, and that’s why Honda left you with the option of turning the whole system off. Same is true with the ABS system; a push of a button and it goes away, at least on the rear wheel. 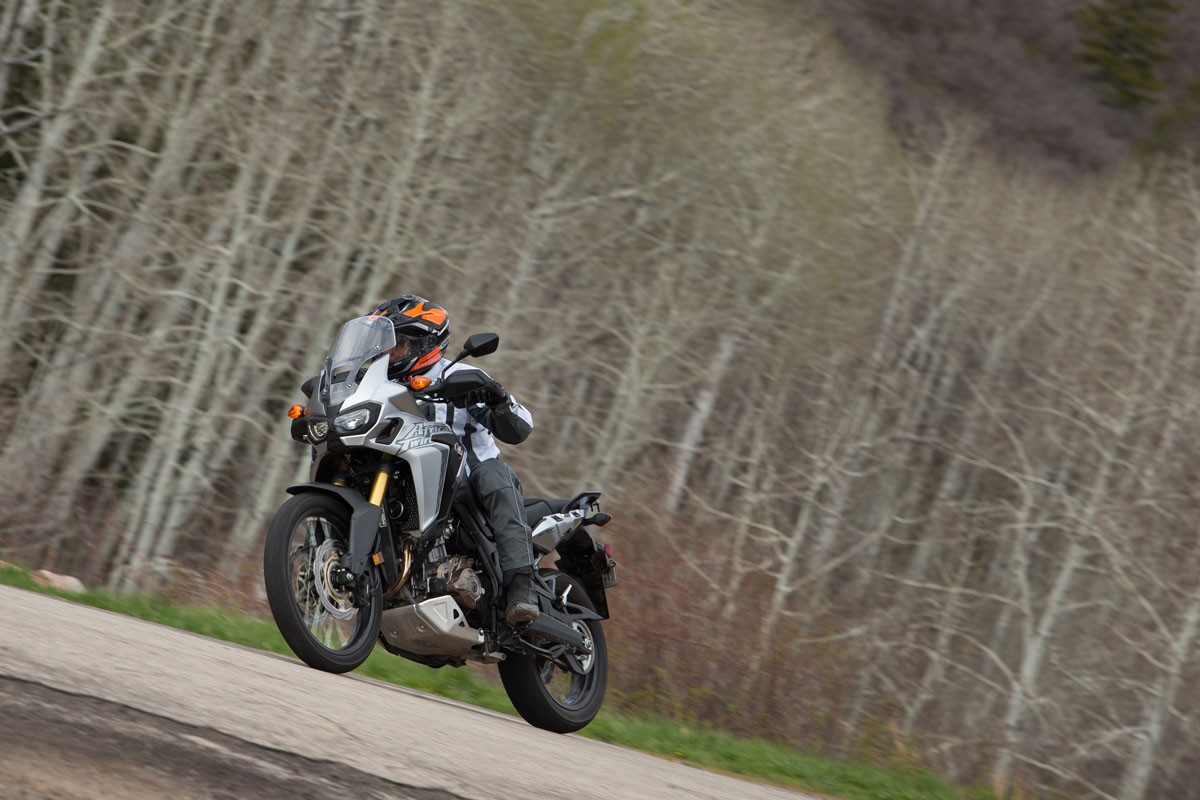 Electronic stuff aside, what we like the most about the bike is the layout. It’s narrow and you feel perfectly at home in the dirt. Standing is natural, the footpegs are in the right place and after a short stint in the saddle, you’ll swear it’s light. It’s not really light, of course–it’s still a 998cc parallel twin in a massive chassis. But if you’re used to another liter-sized adventure bike, the Honda is very compact.

Of course, it’s crazy fast. The torque is excellent and the bike revs out to a sick top-end punch. If you’re a dirt rider, you’ll find it hard to believe anything is faster. If you’re an experienced street rider, though, you’re used to extreme power levels. The Honda clearly isn’t as powerful as the big KTM, or the BMW. It might even give up a little to the Yamaha. But when it comes to this kind of power, it’s all just bragging rights anyway. The Africa Twin can keep up with freeway traffic in first gear–and it’s got five more that go faster. On our intro ride, Johnny Campbell reported that he saw 109 on the speedometer after a short dirt straight.

Right now, the Africa Twin is in short supply. The April 16 earthquake in Kumamoto, Japan damaged the Honda factory, so supplies are limited to one per dealer. MSRP is set at $12,999 for the base model, and $13,699 for the DCT version. 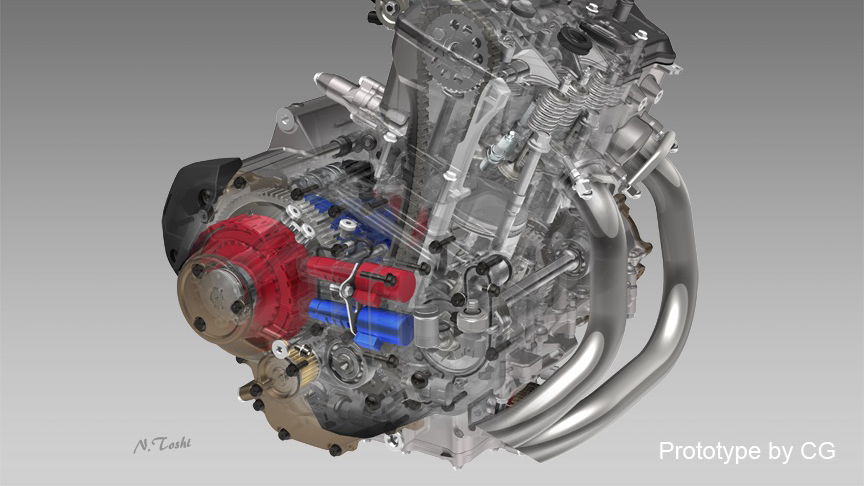