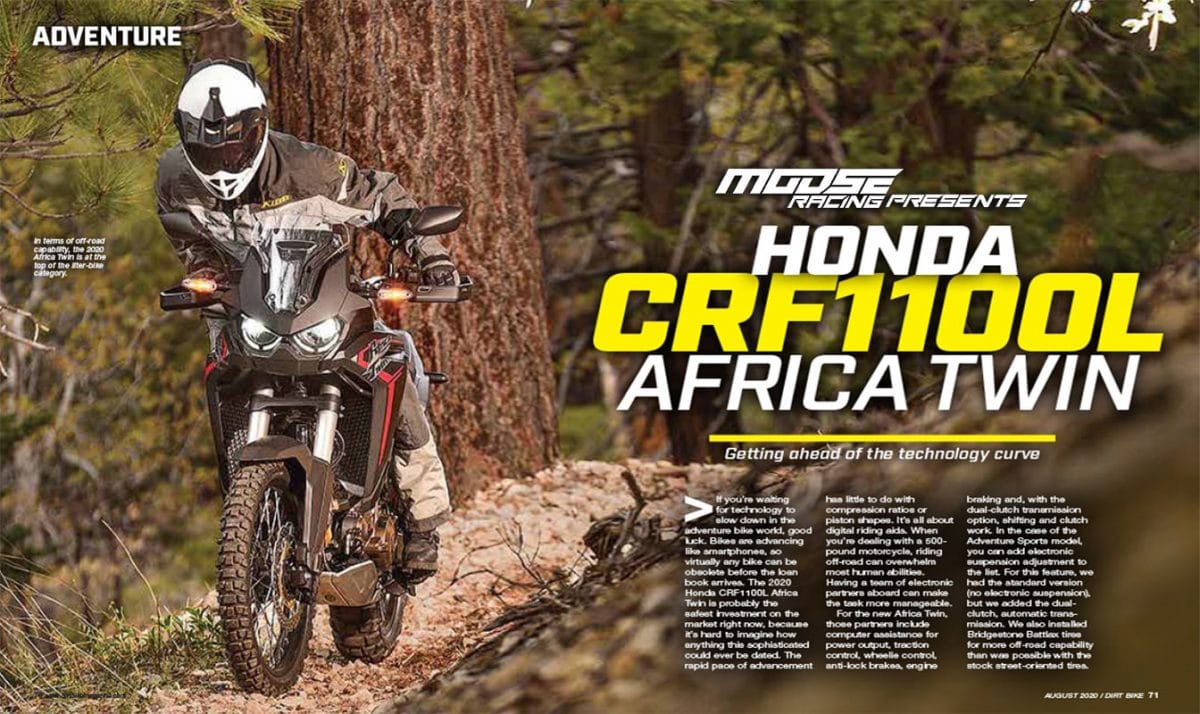 If you’re waiting for technology to slow down in the adventure bike world, good luck. Bikes are advancing like smartphones, so virtually any bike can be obsolete before the loan book arrives. The 2020 Honda CRF1100L Africa Twin is probably the safest investment on the market right now, because it’s hard to imagine how anything this sophisticated could ever be dated. The rapid pace of advancement has little to do with compression ratios or piston shapes. It’s all about digital riding aids. When you’re dealing with a 500-pound motorcycle, riding off-road can overwhelm most human abilities. Having a team of electronic partners aboard can make the task more manageable.

For the new Africa Twin, those partners include computer assistance for power output, traction control, wheelie control, anti-lock brakes, engine braking and, with the dual-clutch transmission option, shifting and clutch work. In the case of the Adventure Sports model, you can add electronic suspension adjustment to the list. For this feature, we had the standard version (no electronic suspension), but we added the dual-clutch, automatic transmission. We also installed Bridgestone Battlax tires for more off-road capability than was possible with the stock street-oriented tires.

This year’s Africa Twin has undergone big changes, starting with an 86cc increase in displacement. It’s said to have 6-percent more power due to a 6.5mm increase in stroke, as well as changes in valve timing and fuel injection. The motor is still a vertical twin with a 270-degree crank. The firing order doesn’t sound or feel like an old-school Japanese twin, though. It’s more like a Ducati. Honda also redesigned the bodywork, subframe and swingarm. The bike is narrower in the middle and has a motocross-style removable subframe. As we said, the real progress is all digital. The Africa Twin has a long list of electronic riding aids, and the star of the show is Honda Selectable Torque Control (HSTC), or what everyone else calls traction control. This is the digital battlefront in the adventure bike world. Honda gives you multiple levels, starting at zero (no intervention) and going up to seven, where the bike’s ECU basically takes control of the throttle any time the slightest rear-wheel slip is detected. This year the difference between the levels isn’t evenly spaced. There’s more of a jump between one and two than between six and seven. This is independent of four-level power control, where you can curb the bike’s max horsepower output. That’s said to be right at 100 horsepower when unfettered. Wheelie control also takes control of the throttle when the bike thinks things are going badly, and it has three levels of intervention. There are also three levels of engine braking and, if you have the dual-clutch option, there’s another world of adjustability. Depending on how aggressively you want the bike to shift, you can choose four different options or just switch to push-button shifting. In any of these modes, you have no manual clutch; it basically works like a Rekluse without the lever.

With so many options and combinations of options, the learning curve is pretty steep. It’s intimidating, and after weeks on the bike, we still get lost. The left side of the handlebar has no less than 16 different buttons. The right has eight. This year Honda provides a 6.5-inch TFT touchscreen display that helps you scroll through the options before you put on your gloves. Once you are on the road, it’s easier to learn the buttons. You learned to use your iPhone; you can handle this.

HOW MUCH CONTROL DO YOU WANT?
All of this stuff has one primary goal: to make riding easier, especially off-road riding. The funny thing about motorcycle riders is that easier doesn’t always equate to more fun. All this adjustability means that you get to choose the difficulty/fun ratio. It might take a little trial, and hopefully not too much error. The knee-jerk reaction for most off-road riders is to go to the extremes: full power, zero traction control, zero wheelie control, manual shifting. Each one of these has pros and cons. First of all, no one really needs 100 horsepower off-road, but it’s fun. You can be forgiven if you use this as your default, but you won’t actually go any faster. Be prepared to spin like crazy and burn through tires while you grin like a fool. HSTC is a more complicated choice. Levels three and up are mostly buzz-killers in the dirt, but zero, one and two present viable options. With zero traction control, the results are predictable. The wheel breaks loose unless you feed in throttle ever so gently. With levels one or two, you get a little hesitation if you open the throttle too fast. The impressive part is that you can still break the rear-wheel loose and flat-track your way around a turn. You can also use a big handful of throttle to get unstuck in the sand. If you’re dealing with extended sand rides, though, the best level is still zero.

Really deep sand is a weakness for any adventure bike, and the Africa Twin is no exception. It’s a big motorcycle and takes a lot of strength to manage at slow speeds. Eventually, you become comfortable as long as you stay within your limits. It’s all about adjusting to your new normal. After a little time on the A-twin, you look at off-road riding differently. A rough dirt road is no problem, but you have to watch out for big G-outs. Rocks aren’t that much of an issue, but mud and sand are deal-breakers.

For most situations, the Honda’s suspension and overall handling are excellent. This is a big upgrade from the initial Africa Twin of 2016 and even the redo of a few years later. The bike is well-balanced and perfectly capable of a fast pace. How does the Honda’s off-road capability stack up against that of other adventure bikes? In pure dirt-worthiness, big bikes still have a disadvantage because of weight and size. The KTM 790 is the twin cylinder that currently rules in that world. In the big-bike category, though, there isn’t much in the same league as the Honda unless you include the now-discontinued KTM 1190. That bike had more power and traction control that was a little more seamless. But, no one else has ever offered anything like the dual-clutch transmission. That one feature truly sets the Honda apart. We’ve found that no two riders have quite the same reaction to it. If you use it in the default setup, most riders find it makes the bike feel a little lazy, like you’re upshifting way too early. That’s what the sport modes are for. You can select three different levels of aggressiveness. If you want to go fast on a dirt road, go straight to level three and you’ll be happy. While you’re at it, you can select the “G” setting, which makes the clutch engage quicker. Riders who think they want to shift for themselves usually change their minds after a short ride. It’s like insisting on using a kick-starter when you have electric start. The real question is whether or not DCT is worth $800 and 30 additional pounds. It all depends on how much of a control freak you are. 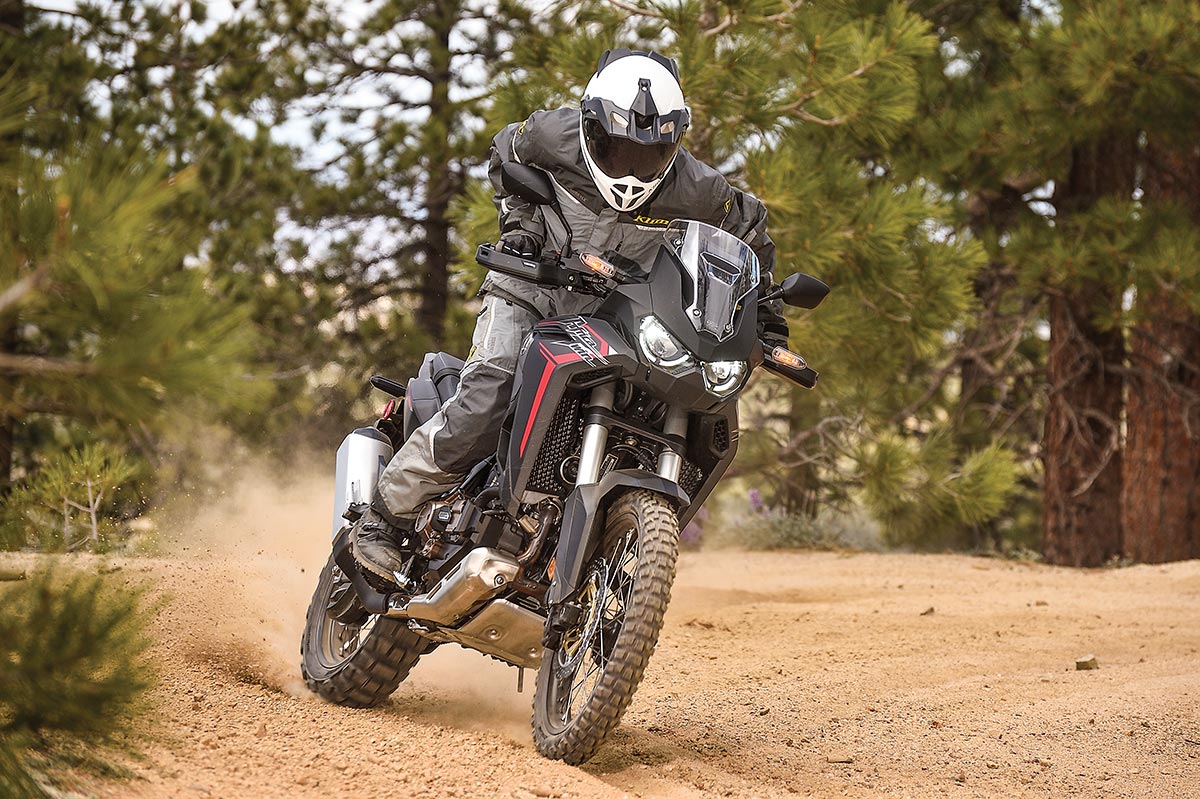 STREET TIME
There’s no question that most adventure bikes never go off-road. No judgment here. It turns out that they make roomy, comfortable street bikes, and the Africa Twin is especially good for killing miles and miles of highway. The standard model has handguards and a lower windscreen this year. The screen is still tall enough to keep most of the wind off your chest, and now you don’t have to stretch or duck to avoid looking through that top edge. The fact that the seat is narrower might make you think it would be less comfortable, but the opposite is true, because you’re not locked into a single posture. The motor isn’t absolutely vibration-fee, but that’s no issue at all. The pulse produced by the motor at medium rpm levels is actually kind of soothing.

Honda, of course, would love to include options to make the bike more of a long-haul machine. You can have a dealer throw in hot grips, panniers, a top trunk, a center stand, rally pegs and crash bars. That selection of stuff is much larger than it was even a year ago. Or, you could buy it in standard configuration, at $14,399. That’s a screaming deal compared to the 150-horsepower heavy hitters in the field like the BMW R1250GS and the Ducati Multistrada. It comes in closer to the sub-1000cc bikes, such as the BMW F850GS, the Triumph Tiger 800 and the KTM 790, and gives you a lot more motorcycle.

All that adds up to a safe harbor in the rapidly changing adventure bike world. No matter what comes down the chute in the next few years, there’s no way that the Africa Twin is going to find itself at a technological disadvantage—not for a long, long time.