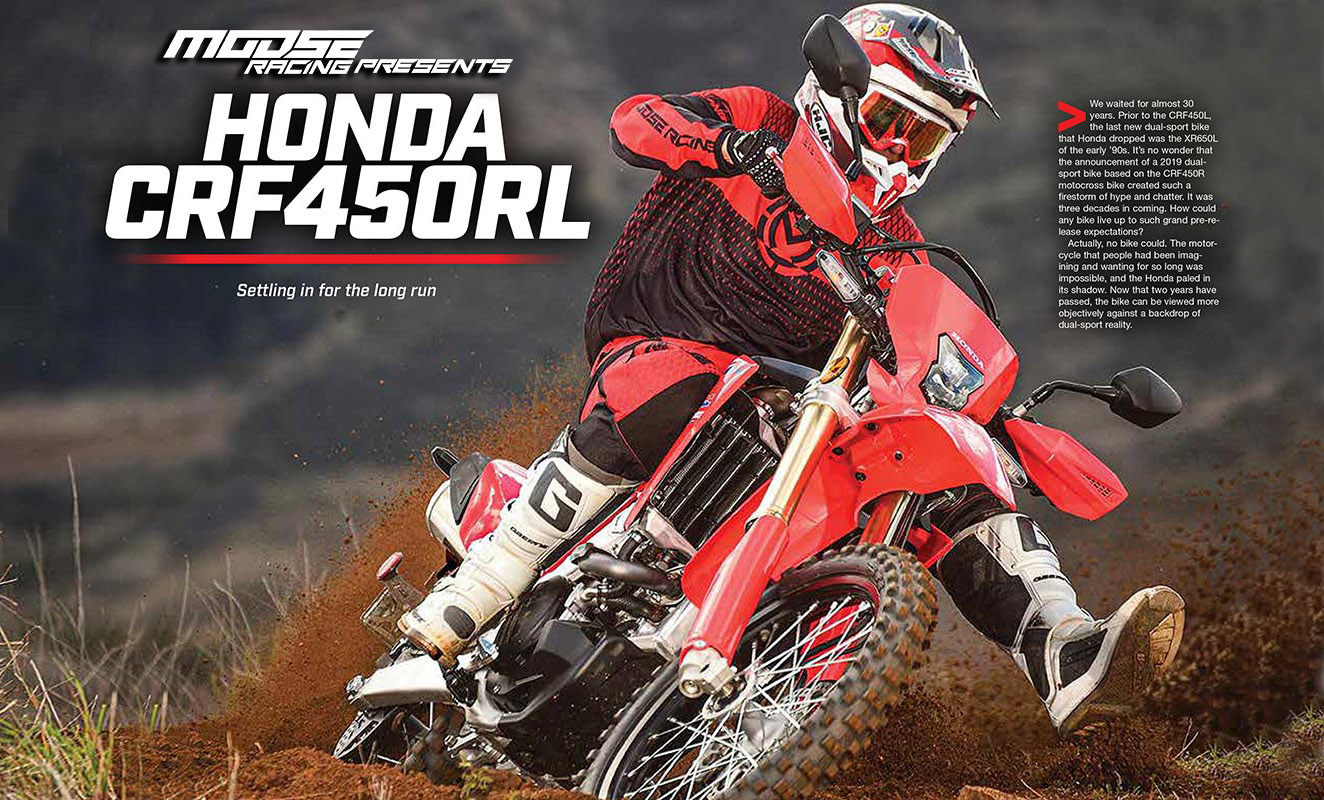 We waited for almost 30 years. Prior to the CRF450L, the last new dual-sport bike that Honda dropped was the XR650L of the early ’90s. It’s no wonder that the announcement of a 2019 dual-sport bike based on the CRF450R motocross bike created such a firestorm of hype and chatter. It was three decades in coming. How could any bike live up to such grand pre-release expectations?

Actually, no bike could. The motorcycle that people had been imagining and wanting for so long was impossible, and the Honda paled in its shadow. Now that two years have passed, the bike can be viewed more objectively against a backdrop of dual-sport reality. 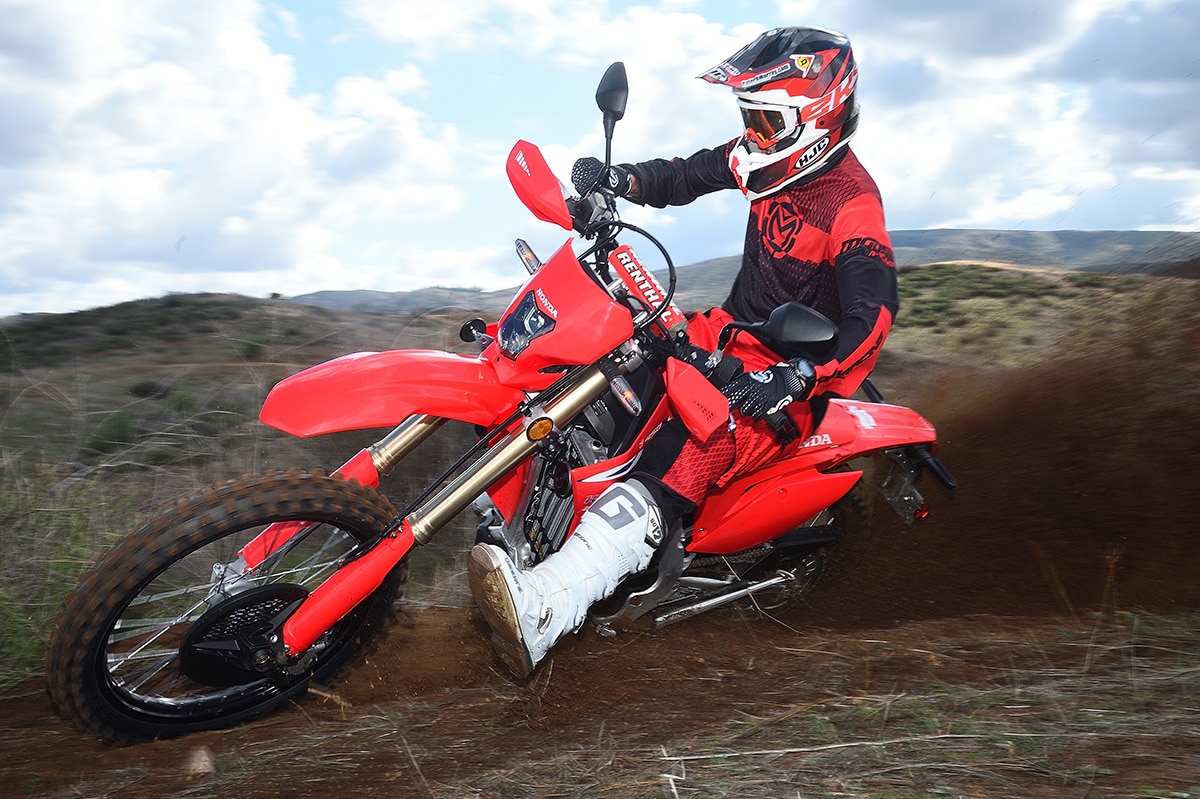 SETTLING IN FOR THELONG RUN
To be fair, Honda has released one or two other dual-sport bikes in recent years. The CRF250L arrived in 2013 and was recently punched out to a 300. There’s also the new Trail 125. Neither of those bikes is what we call, for lack of a better term, a “hard” dual-sport bike. They’re manufactured in Southeast Asia and designed to appeal to casual riders with a limited budget. The 450 had a very different mission. KTM had already established that serious riders would pay a lot for a street-legal bike with serious off-road capabilities. Honda decided to challenge KTM but still keep the price under $10,000. Thus, the MSRP is $9999, which is $1600 less than the KTM 500EXC-F. In order to distance the 450 from the CRF300L, Honda changed the bike’s name; now it’s the CRF450RL. It got a few changes for 2021. The EFI mapping is different; it has handguards and has a new look. It probably won’t be getting more changes any time soon. It has never been in Honda’s big plan to make frequent updates to dual-sport models; the XR650L is still in the line and is virtually identical to the 1993 model. Honda, in fact, has already announced the 2022 CRF450RL, and it is indistinguishable from this one.

This bike was originally inspired by the previous (2017–2020) CRF450R motocross bike. When you start to really look at the bike part by part, it’s apparent that Honda redesigned just about everything, even though the basic configuration is the same. The motor still has the Unicam design with finger-followers on the intake valves and rockers on the exhaust side. The RL has a lower compression ratio (12.0:1 as opposed to 13.5:1), a different cam, and, of course, different mapping and a very different exhaust. The gearbox is a six-speed, and it has plastic covers to help contain engine noise. The frame has most of the same dimensions as the R that it was based on but has a number of extra brackets and so forth. The Showa suspension components are the same pieces as the motocross bike’s but with softer valving.

HOW SERIOUS ARE YOU?
When this bike was first released, it took a lot of heat for its weight. That hasn’t changed. On our scale, it weighs 277 pounds without fuel. For comparison, the KTM 500EXC is 243 pounds. That’s a big handicap, almost putting the Honda in a different category from the KTM, Husky and Beta. Setting that aside, the Honda has a lot going for it. The suspension is excellent—by far the best in the dual-sport world. We actually raced our previous 450L test bike in the 24 Hours of Glen Helen as our night bike with stock suspension. The reason we did that was because the headlight is so powerful—again, the best in the class.

The biggest engineering challenge for any dual-sport bike is the two-headed hydra of noise and emissions. Most of the emissions measures are well-hidden; there’s a charcoal canister behind the cylinder, an air pump under the tank shroud and a cat in the muffler. The big thermostat on the right side of the motor isn’t directly emissions-related. Noise items start with the muffler and include the plastic engine covers and IRC tires. The bike is lean and quiet, of course, and that is costly in the horsepower department. A stock CRF450RL is lucky to break 40 horsepower, whereas the 2021 CRF450R produces over 57 horsepower. That’s not especially surprising or bad. The last thing you want in an off-road bike is a motocross powerband. The RL is smooth and very torquey down low. At the bottom, the throttle response is actually excellent. There’s no big hit as the revs climb, and it doesn’t rev nearly as high as a motocross bike. The RL hits its peak around 7500 rpm, whereas the R will keep making more and more power all the way to 10,000 rpm or so. Again, all that is forgivable and somewhat expected. The one real glitch in the power delivery is the Honda’s tendency to stall. We presume Honda attempted to address this with new mapping for 2021. This isn’t a flame-out scenario, where the bike coughs and dies as you open the throttle. It only happens when you close the throttle. It doesn’t happen frequently, but when it happens, it’s annoying. Initially, we also had a few flame-outs, but these went away as the bike was broken in. The easiest solution is to turn up the idle. According to the manual, the bike is supposed to idle at 2000 rpm. Bump that up to 2100 and the problem mostly goes away, even when the trail riding is tight and technical. Another bonus for the RL is the radiator fan, which eliminates overheating in such conditions.

As with all dual-sport bikes, the tires that come on the Honda are very street-oriented. We have to confess that we didn’t even ride the bike with the stock tires. They aren’t much fun in the dirt, so we installed a set of STI Tech 2 tires, which are full knobbies but fully DOT approved. The STI tires are actually excellent, even by full-dirt standards. When you install full knobs, you have to also install rim locks, or you will simply spin the valve stem off. Then you need to balance the tires if you plan to ride on the street at all. While we were at it, we installed STI heavy-duty tubes.

WHERE DO YOU STOP?
Almost anyone who buys an RL will probably consider modifications. It’s understandable. Here are some things you will have to deal with. 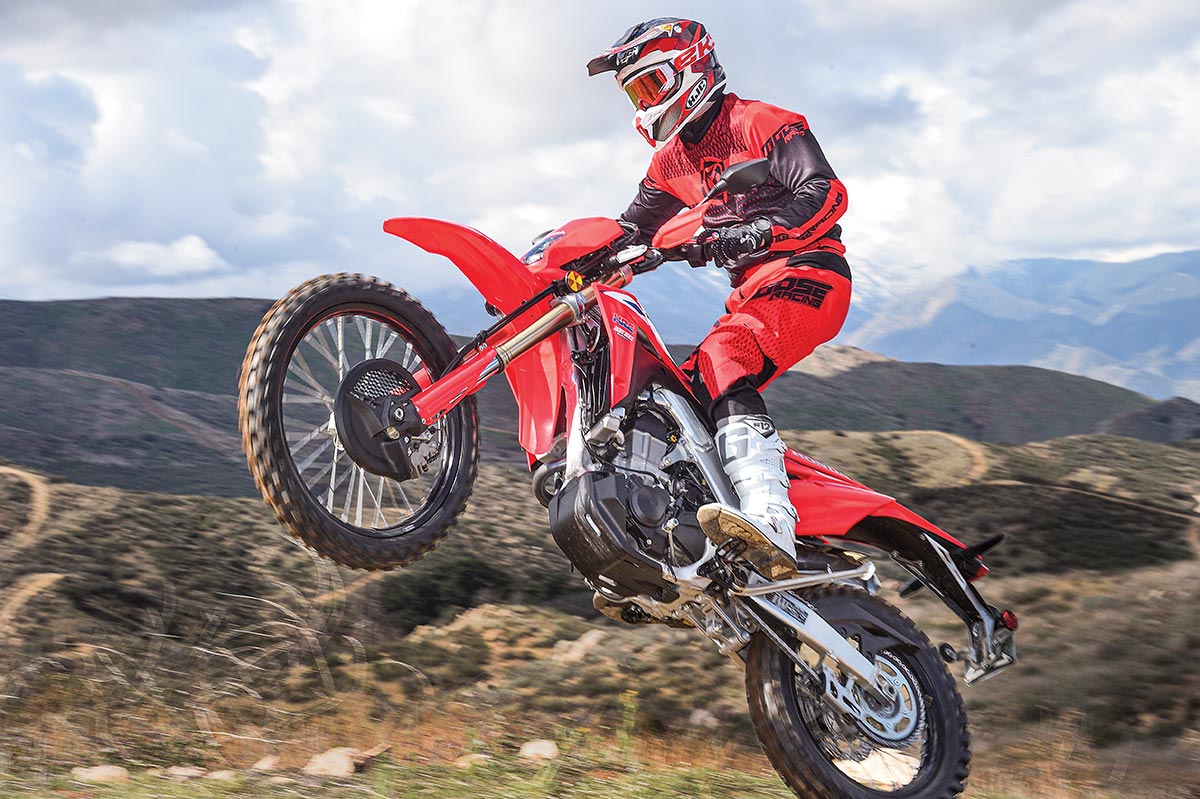 1. Legal considerations. All that emissions equipment is federally mandated, although enforcement is up to each state. Only California is aggressive about that, and at this point, only at the dealer level.

2. Mapping. The ECU on the Honda is locked and lean. The knee-jerk reaction is to order a Vortex ignition, but they are on backorder from most sources, not to mention somewhat expensive. If you have the notion of installing an ignition from the X or the R, those bikes have different wiring harnesses.

3. Pipe. A competition exhaust is an obvious way to lose weight and increase performance, but you should know up front that the bike will run poorly unless you first address the mapping. It will also be much, much louder.

4. Weight. It’s not that hard to take 10 pounds or so off the Honda. Between the pipe, mirrors and various parts, you can get it down in the 260-pound range without going crazy. After that, it gets hard. The Christmas tree hanging from the rear fender is super sturdy and well-integrated with the subframe.

5. Engine mods. If you put an aggressive cam in the motor, you should also address the valve springs. The compression ratio can be upped with an aftermarket piston, but once again, the bike will have to be mapped properly to take advantage of the modification.

6. Diminishing returns. Like most projects, a Super L is a budget buster. You can spend a great deal and never match the performance or weight of an R, plus you can lose legitimacy as a dual-sport bike along the way. As with many things in life and dirt bike riding, moderation is the key to success.

Understanding what the CRF450RL is and isn’t is important up front. It’s not a racer, and it’s not the one bike that covers all bases. But, it is a well-made, reliable machine that can serve as a trail bike on weekends and even get you to work during the week. In the end, that’s exactly what a dual-sport bike is supposed to be.