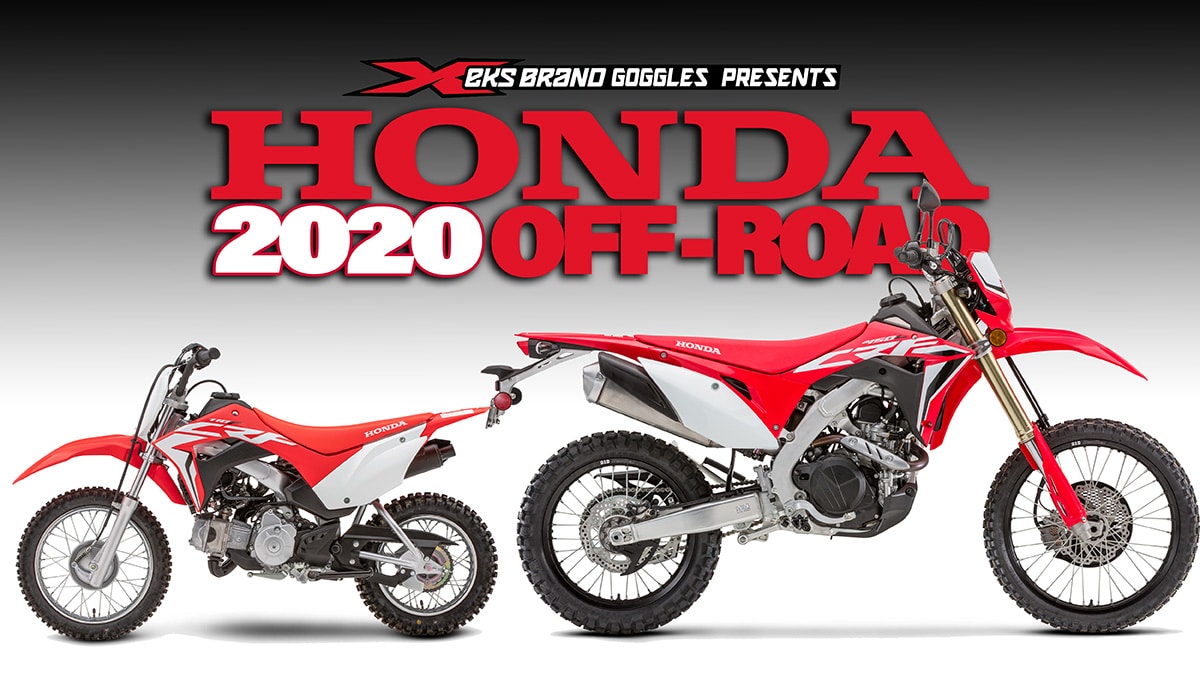 Honda just announced its 2020 line of off-road bikes as well as its flagship dual-sport bike, the CRF450L. The off-road line once again includes the CRF450X trail bike, the CRF450RX and CRF250RX cross-country racers and the family oriented CRF250F, CRF125F, CRF110F and CRF50F. The following information is from Honda’s press release.

The CRF450RX and CRF250RX closed-course off-road racers benefit from the same improvements as their track-focused siblings, while the CRF450X off-roader and CRF450L dual-sport machine return for the new model year with updated graphics. At the other end of the spectrum, the approachable, fun 2020 CRF250F, CRF125F, CRF110F and CRF50F await recreational riders with trail-focused performance and proven reliability.

“For generations, Honda has demonstrated its commitment to the dirt bike market, and that’s never been truer than now,” said Chris Cox, American Honda’s Manager of Experiential Marketing/Press. “Our 2020 lineup of off-road models, including the CRF Performance and CRF Trail families, comprises machines that are top-of-class for motocross, off-road competition, trail riding and, in the case of the CRF450L, even using streets to extend off-road adventures. With such a capable and diverse collection of motorcycles, you can once again expect to see a lot of red on tracks and trails from coast to coast.”

With wins in 21 of the last 22 Baja 1000s (including 12 with the CRF450X), it’s no secret that Honda rules the legendary off-road race, and in the Baja debut of the model’s new iteration, SLR Honda kicked off the 2019 SCORE International series with a win in the San Felipe 250. A true off-road machine, the CRF450X is 50-state off-road legal and is suitable for year-round racing and trail riding. With off-road appropriate features like a sidestand, 18-inch rear wheel, headlight, sealed chain and six-speed transmission, it’s ready for desert expanses or tight woods, and it gets new graphics for the 2020 model year.

Having taken the dual-sport world by storm since its debut last year, the road-legal CRF450L expands customers’ off-road possibilities by enabling access to the best riding trails on public lands, even when that means connecting them via asphalt roads. Based on the CRF450R, the CRF450L is a performance off-road machine, but it also has the comfort and durability to make riding it and owning it a pleasure in the long run. Already armed with features like a titanium fuel tank, six-speed transmission and LED lighting, the CRF450L gets new graphics for 2020.

Campaigned in national championship off-road racing by JCR Honda’s Preston Campbell, SLR Honda’s Tallon LaFountaine and Phoenix Racing Honda’s Austin Lee, the CRF250RX features closed-course off-road specific components like a large fuel tank, aluminum sidestand, and 18-inch rear wheel, and for 2020, it receives a host of important updates, including engine enhancements aimed at bettering low-to-midrange power, and chassis revisions that improve handling. To increase torque and improve driveability, the cam profile is new, the intake and exhaust valves have been revised, the combustion chamber is reshaped, and the exhaust resonator has been removed. At the same time, maneuverability has been improved through a lighter frame and swingarm with optimized flex characteristics, along with a lower battery position and internal suspension updates.

Motorcycling is armed with legions of riders who got their start on Honda trail bikes, and with the 2020 lineup of CRF Trail models, that trend is sure to continue long into the future.

The flagship of Honda’s CRF Trail line, the CRF250F can take riders from their first time on dirt to tackling challenging trails. Electronically controlled Keihin fuel injection, it’s 50-state off-road legal, and and the SOHC long-stroke, air-cooled engine delivers quality power for smooth acceleration and excellent rear-wheel hookup. A steel perimeter frame and Showa suspension deliver confidence-inspiring handling and a compliant ride, both at speed and through technical sections. Add it all up and the result is a fun-but-capable trail bike that’s ready for anything—and any rider. 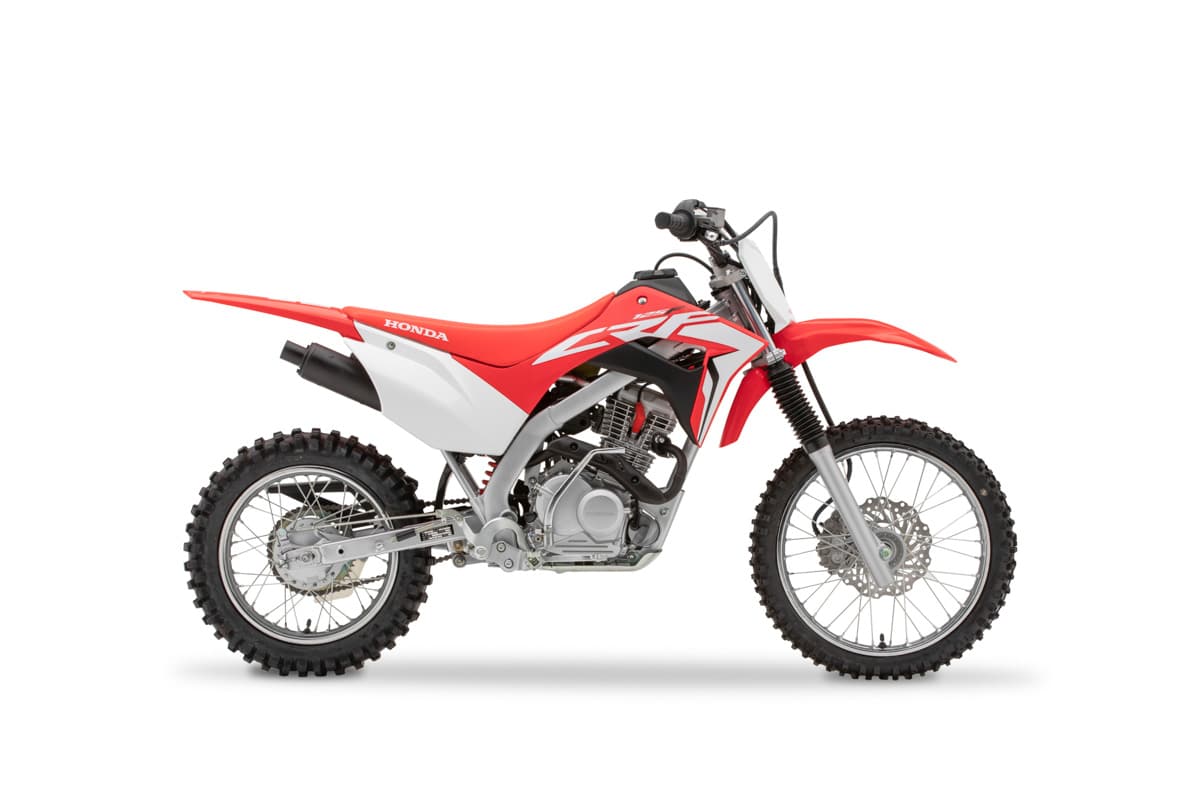 A mid-sized trail bike with power for full-sized trail obstacles, the CRF125F is available in both a standard version and the Big Wheel, which accommodates taller riders via larger front- and rear wheels, longer-travel suspension and a higher seat. The SOHC 124cc engine delivers its power smoothly, and Keihin electronic fuel injection offers dependability and clean running for 50-state off-road legality, while the steel twin-spar frame and Showa suspension deliver a smooth, nimble ride. With their fun performance and CRF Performance line looks, both versions of the CRF125F promise years of recreational trail-riding enjoyment.

No model more perfectly encapsulates Honda’s proud heritage—extending all the way back to the 1973 XR75—of offering four-stroke dirt bikes that are kid-sized but full-featured, and that beckon new riders to experience the trails. With a clutch-less four-speed semi-automatic transmission and a predictable power delivery, the CRF110F makes learning a breeze. Of course Honda’s proven durability means the machine will continue delivering smiles long after riding skills develop, so there’s no telling where it could take generations of youngsters.

The modern version of the classic, beloved, Z50, the pocketsize CRF50F delivers kids’ first riding thrills (and lifelong memories!) via a 49cc air-cooled engine with an automatic clutch. Ten-inch wheels enable a low seat height and facilitate spirited, nimble handling, helping pack more fun per cubic centimeter into this kids bike than any motorcycle around.