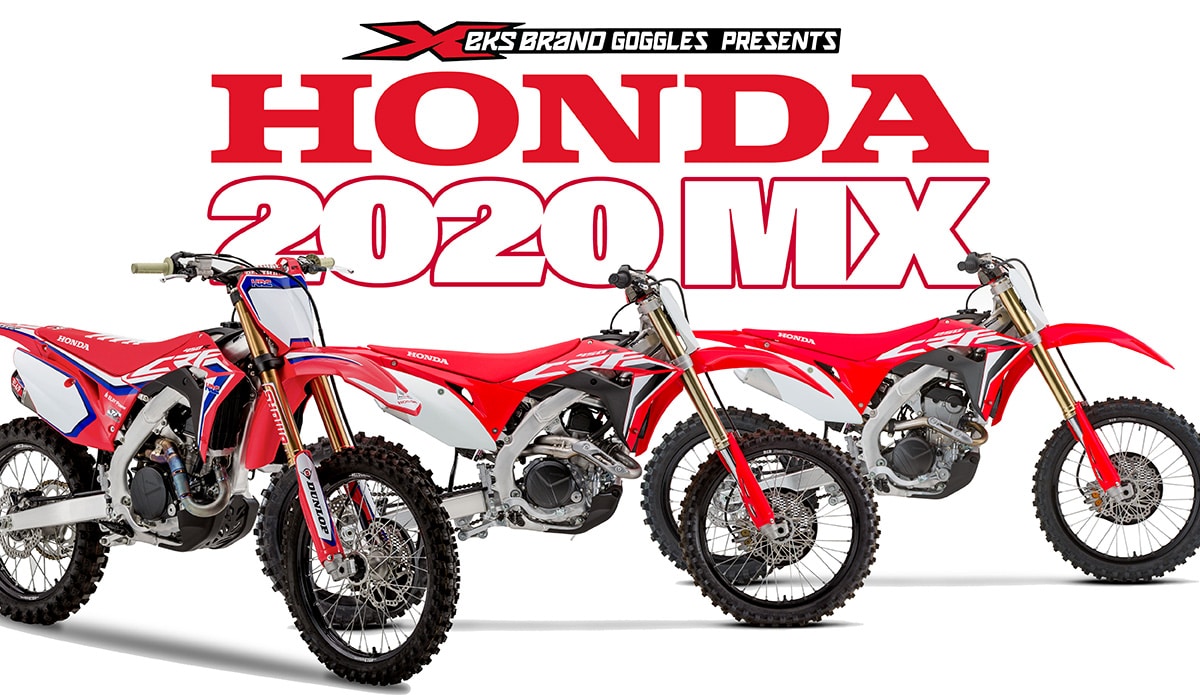 The 2020 Honda motocross bike are out! Today, Honda released information, pricing and availability dates for its new MX bikes. Included are the CRF450R, the CRF250R and the CRF150R–plus the CRF450R Works Edition is back. Honda reports a new traction control feature as well as changes to the suspension, air filter and, in the case of the 250, new cams, reworked valves and a reshaped combustion chamber. The following is Honda’s official press release. For more news on 2020 new releases, click here.

From the fire-breathing, high-flying CRF450RWE all the way down to the friendly, cute CRF50F, Honda’s off-road motorcycle lineup is the most all-encompassing and versatile on the powersports market, a fact that was driven home when American Honda today made its first new-model announcement of the 2020 model year. With eight and four machines respectively, Honda’s CRF Performance and CRF Trail families offer something for everyone, whether they be pro-level racers looking to give Ken Roczen and Cole Seely a run for their money, youngsters preparing for their first two-wheel forays, or anyone in between.

The newest iterations of Honda’s proven full-size motocross models—the CRF250R and CRF450R, as well as the elite CRF450RWE—all receive important upgrades to raise performance levels even higher, while the CRF150R mini is back again in 2020.

“For generations, Honda has demonstrated its commitment to the dirt bike market, and that’s never been truer than now,” said Chris Cox, American Honda’s Manager of Experiential Marketing/Press. “Our 2020 lineup of off-road models, including the CRF Performance and CRF Trail families, comprises machines that are top-of-class for motocross, off-road competition, trail riding and, in the case of the CRF450L, even using streets to extend off-road adventures. With such a capable and diverse collection of motorcycles, you can once again expect to see a lot of red on tracks and trails from coast to coast.”

Last year saw Honda significantly expand its CRF Performance family to include machines for riding applications including motocross, closed-course off-road, pure off-road, and even dual sport. For 2020, a number of models in the lineup get important upgrades to keep Red Riders running at the front of the pack.

For 2020, Honda’s flagship CRF450R—the same platform raced by Team Honda HRC’s Ken Roczen and Cole Seely—puts more engine-management choices at the fingertips of racers, with the addition of Honda Selectable Torque Control (HSTC). Developed through HRC’s worldwide racing effort, the system maximizes rear-tire hookup to keep all of the Unicam® engine’s horsepower driving the bike and rider forward, improving racing success regardless of track conditions. In keeping with racing-body regulations, the system measures rate of rpm increase and adjusts delivery accordingly, and a handlebar-mounted switch enables selection from three levels of delivery (most in class). In addition, the CRF450R’s front-rear balance is refined and handling is improved thanks to internal suspension updates, and a new battery position that lowers the machine’s center of gravity. Improved rear-brake pad performance and durability, and the exclusive specification of Dunlop Geomax® MX3S tires round out a machine that’s ready to take riders to the next level.

Following a successful debut year in which it quickly caught the eye of performance-hungry enthusiasts who demand the absolute best, the CRF450RWE (“Works Edition”) gets even better for 2020, with updates based on the machines in the Team Honda HRC factory race shop. Already a dominant force when it comes to lap times, this exclusive model now features a full titanium Yoshimura exhaust system, as a lightweight Ti header (the first of its kind on a Honda motocross model) joins the titanium Yosh muffler, all specifically designed to work with the model’s hand-polished ports. Honda Selectable Torque Control (HSTC), developed through HRC’s worldwide racing effort, now comes standard, enabling three levels of intervention via a handlebar-mounted switch, and a new battery position lowers the machine’s center of gravity. Rounding out the changes are internal suspension updates, improved rear brake-pad performance and durability, new dual-compound Renthal grips and graphic updates.

The machine that took Jace Owen to the 2019 Kicker Arenacross title victory and powered Amsoil Honda’s Jo Shimoda to the win at the 2018 Monster Energy Cup Amateur All-Star race gets a host of important updates for 2020, including engine enhancements aimed at bettering low-to-midrange power, and chassis revisions that improve handling. To increase torque and improve driveability, the cam profile is new, the intake and exhaust valves have been revised, the combustion chamber is reshaped, and the exhaust resonator has been removed. At the same time, maneuverability has been improved through a lighter frame and swingarm with optimized flex characteristics, along with a lower battery position and internal front-and-rear suspension updates.

Honda’s smallest motocrosser delivers smooth, ample torque across the rev range thanks to its Unicam four-stroke engine—unique in the mini MX world. Showa suspension components include a rear shock working through a Pro-Link rear suspension system, and a 37mm inverted fork. The CRF150R is offered in both standard and Big Wheel versions, the latter featuring larger wheels, a taller seat height, and more rear suspension travel to better suit larger riders.