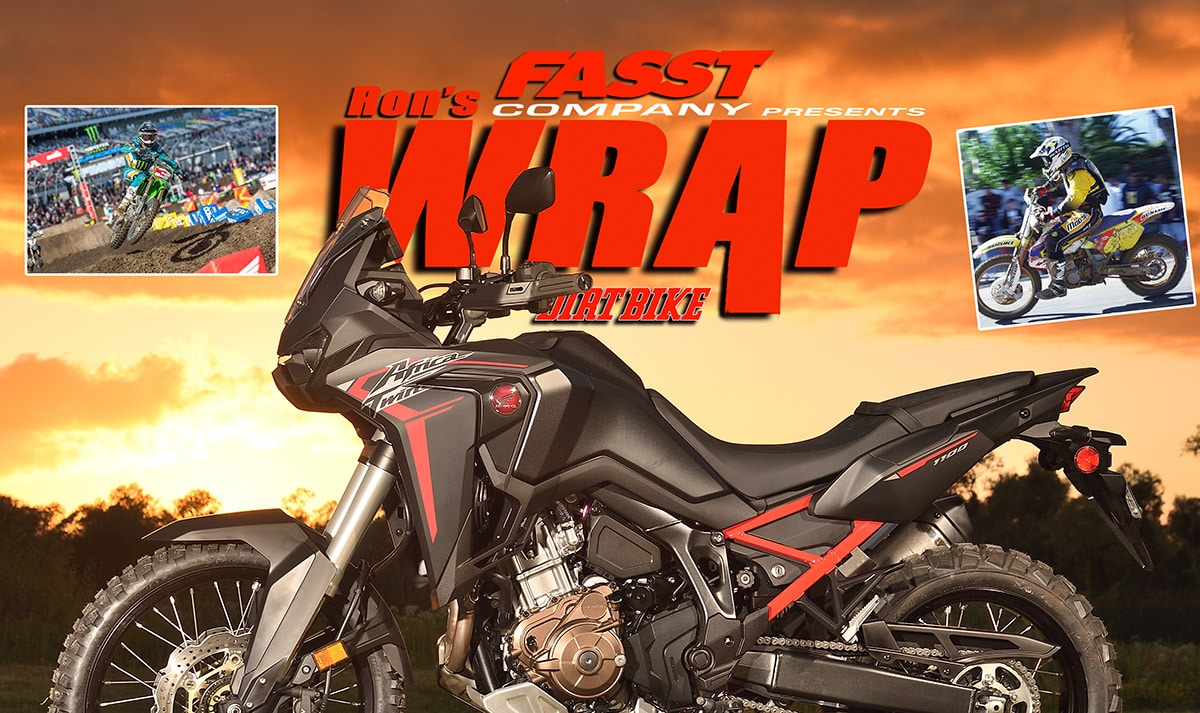 After a Covid-19 generated interruption, we finally got our hands on a 2020 Honda Africa Twin 1100.  Now that KTM has dropped the 1190, the A-Twin is one of the few bikes that fills the gap between adventure lightweights like the KTM 790 and big mega-power maulers like the Ducati Multistrada, the BMWR1250GS  and the KTM 1290. This year’s Africa Twin has undergone big changes, starting with an 86cc increase in displacement. It’s said to have 6 percent more power due to a 6.5mm increase in stroke as well as changes in valve timing and fuel-injection. The motor is still a vertical twin with 270-degree-offset crank pins. Honda also redesigned the bodywork; it’s narrower in the middle and has a motocross-style removable subframe.

As always is the case with high-end Adventure bikes, the Africa Twin has a long list of electronic riding aids, and the star of the show is Honda Selectable Torque Control (HSTC), or what everyone else calls traction control. This is the digital battle front in the adventure bike world. Honda gives you multiple levels, starting at zero (no intervention) and going up to seven, where the bike’s ECU basically takes control of the throttle anytime the slightest rear-wheel slip is detected. This year the difference between the levels isn’t evenly spaced. There’s more of a jump between one and two than between six and seven. This is independent of four-level power control, where you can curb the bike’s max horsepower output. That’s said to be right at 100 hp when unfettered. Wheelie control also takes control of the throttle when the bike thinks things are going badly, and it has three levels of intervention. There are also three levels of engine braking and, if you have the dual-clutch option, there’s another world of adjustability. Depending on how aggressively you want the bike to shift, you can choose four different options or just switch to push-button shifting. In any of these modes, you have no manual clutch–it basically works like a Rekluse without the lever. 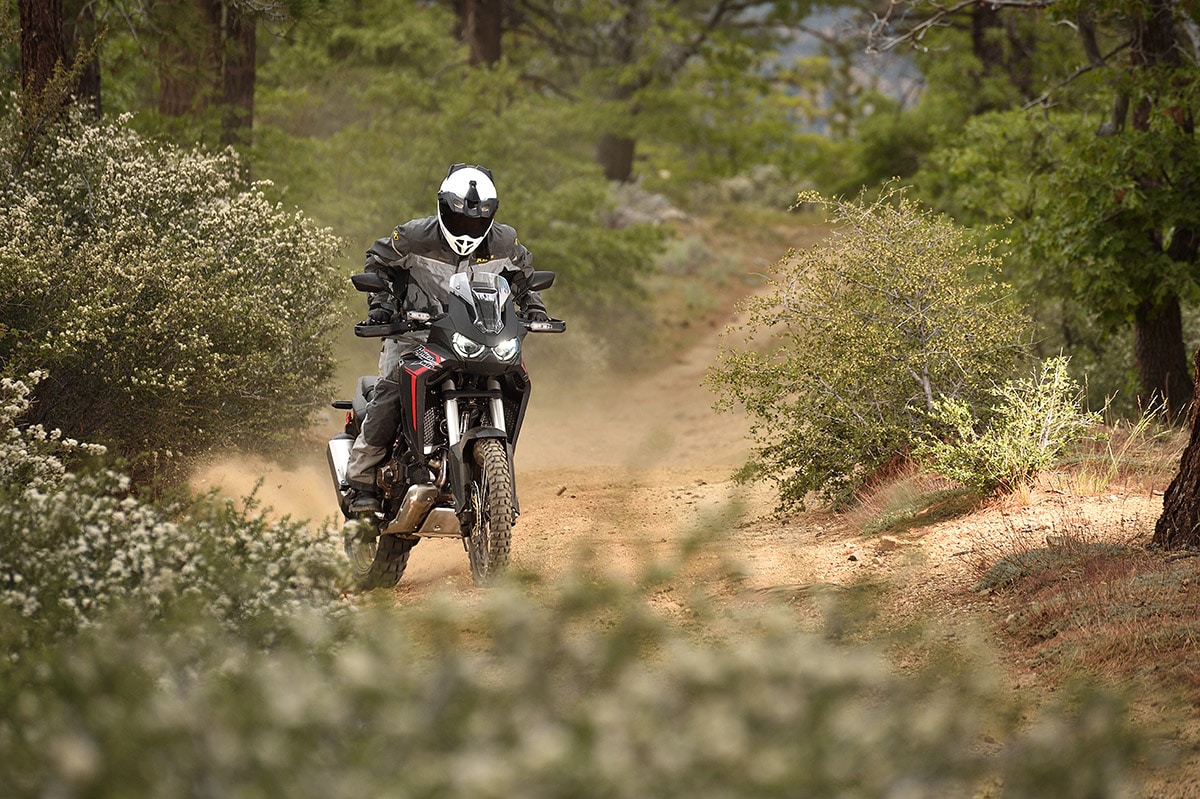 With so many options and combinations of options, the learning curve is pretty steep. It’s intimidating and after weeks on the bike, we still get lost. The left side of the handlebar has no less than 16 different buttons. The right has eight. This year, Honda provides a 6.5-inch TFT touch-screen display that helps you scroll through the options before you put on your gloves. Once you are on the road, it’s easier to learn the buttons. You learned your iPhone; you can handle this. 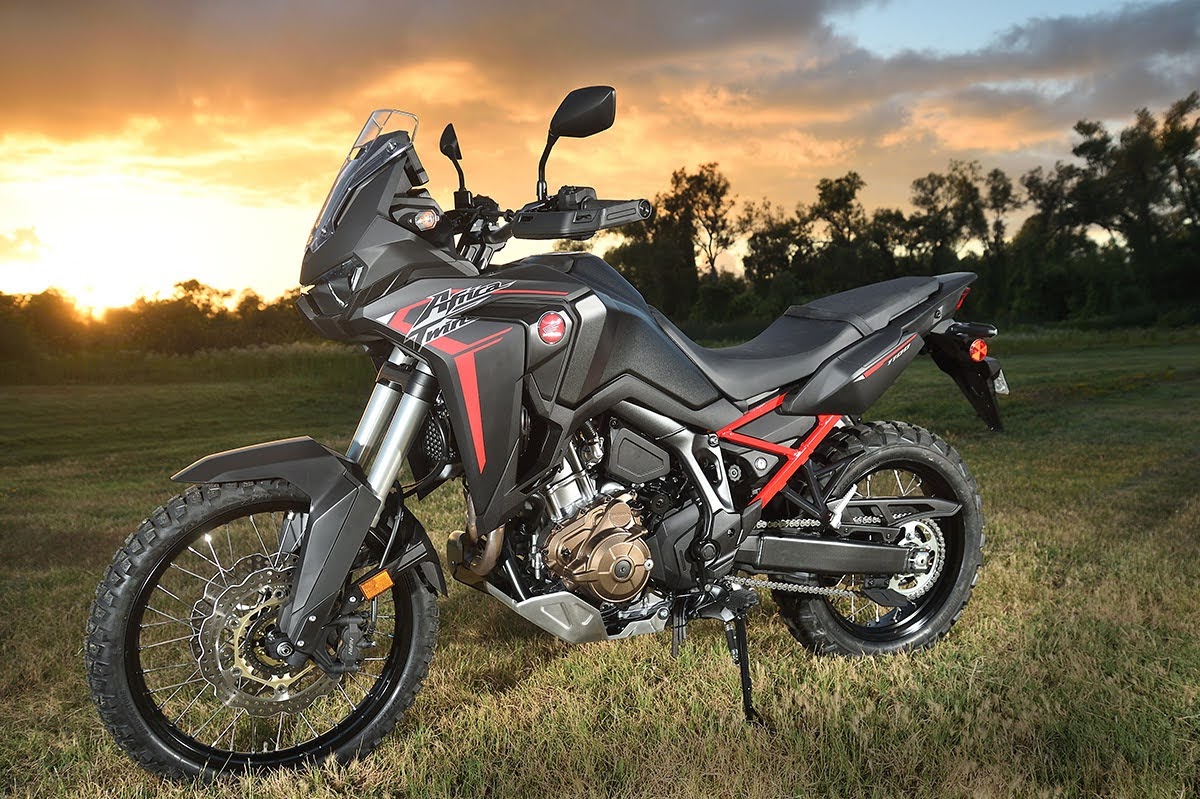 For most situations, the Honda’s suspension and overall handling are excellent. This is a big upgrade from the initial Africa twin of 2016 and even the re-do a few years later. The bike is well balanced and perfectly capable of a fast pace. How does the Honda’s off-road capability stack up to other adventure bikes? In pure dirt-worthiness, big bikes still have a disadvantage because of weight and size. The KTM 790 is the twin-cylinder that currently rules in that world. In the big-bike category, though, there isn’t much in the same league as the Honda unless you include the now-discontinued KTM 1190. That bike had more power and traction control that was little more seamless. But no one else has ever offered anything like the dual-clutch transmission; that one feature truly sets the Honda apart. We’ve found that no two riders have quite the same reaction to it. If you use it in the default set-up, most riders feel it makes the bike feel a little lazy, like you’re upshifting way too early. That’s what the sport modes are for. You can select three different levels of aggressiveness. If you want to go fast on a dirt road, go straight to level three and you’ll be happy. While you’re at it, you can select the “G” setting, which makes the clutch engage more quickly. Riders who think they want to shift for themselves usually change their minds after a short ride. It’s like insisting on using a kickstarter when you have electric start. The real question is whether or not DCT is worth $800 and 30 additional pounds. It all depends on how much of a control freak you are. Suggested retail for the base model is $14,399. For the full test, check out the August 2020 print edition of Dirt Bike. 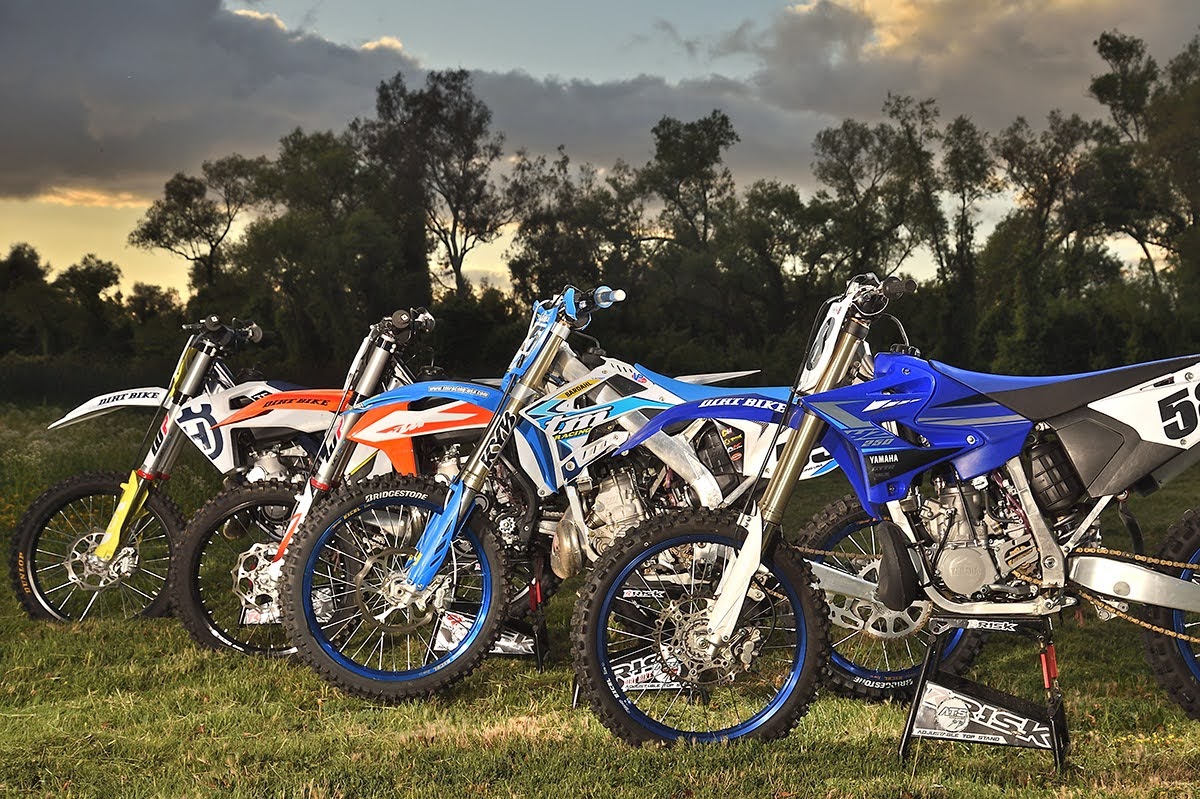 It’s been a long time since a 250 two-stroke won a Supercross (Chad Reed in 2005) or a National title (Ricky Carmichael, also in 2005). But they win all the time at the local level and there’s still a viable selection to choose from. KTM, Husqvarna and TM all have two-strokes that have kept up with the times, and even the Yamaha 250 has had suspension updates through the years. Which one is best? That’s what we’re here to find out. There will be a 250 two-stroke video shootout showing up soon on our Youtube channel as well as a full test in the August print edition of Dirt BIke.

Next Weekend, Monster Energy Supercross will resume at Rice Eccles stadium in Salt Lake City. Ralph Sheheen, Ricky Carmichael and Danial Blair talk about what it will be like for the riders, who will do seven back-to-back races with limited support. There will be no fans, but NBC Sports will broadcast it all starting Sunday at 12:00 PDT. 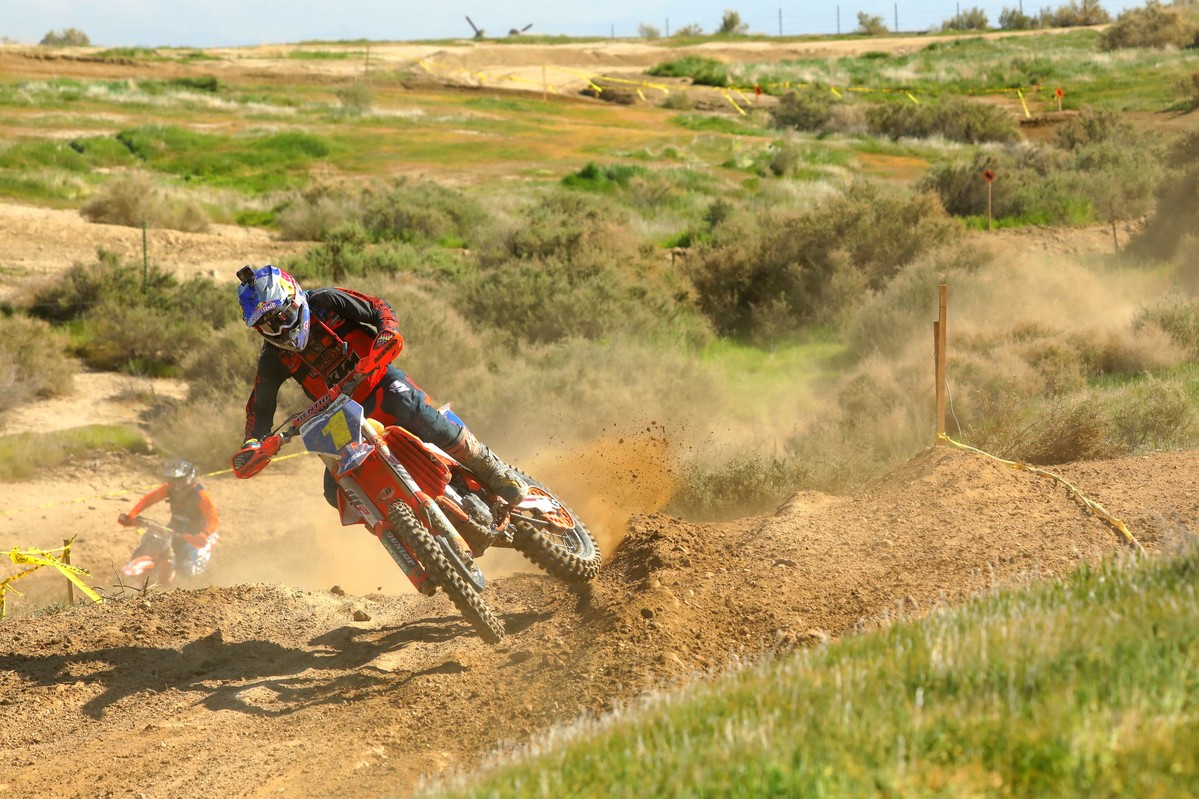 WORCS will start up on the same weekend as Supercross in Mesquite Nevada. Actually that’s the nearest town, but the race itself will be in Arizona, just across the state line. Nevada has opened its hotels, though, so accommodations are available. You can also stay in nearby St George, Utah. The series is only two-rounds old, but so far it’s been all about Taylor Robert. The two riders to watch are Zach Bell–who has suffered mechanical trouble in the series so far–and Austin Walton, who is getting faster all the time. Go to Worcsracing.com for details. 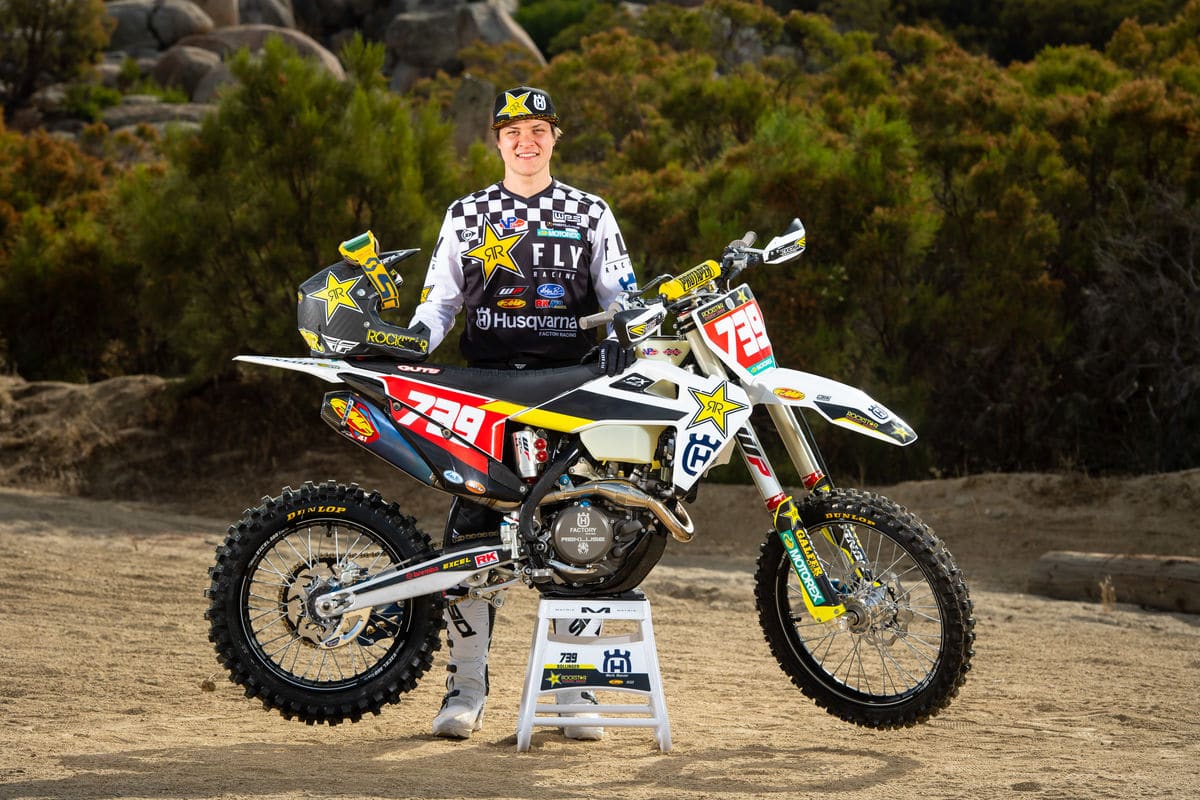 Husqvarna Motorcycles North America, Inc. is pleased to announce that the Rockstar Energy Husqvarna Factory Racing Team has signed a two-year contract extension with offroad racer Trevor Bollinger, extending his current contract into the 2022 race season.
Upon return from injury, Bollinger will compete in the Grand National Cross Country (GNCC) and AMA National Enduro Championship aboard the FX 450, where he has proven to be a top contender in the premier XC1 Open Pro and NE1 Pro classes. In 2019, Bollinger battled his way to five podiums and four top-five finishes in the GNCC Series and while he had all intentions of racing for victories in 2020, the North Carolina native was quickly sidelined after suffering a crash at the National Enduro season opener in February. Bollinger had surgery to repair his ACL and meniscus and he has been hard at work rehabbing his leg in order to return to racing after the summer break in September.
Trevor Bollinger: “I am super excited to extend my partnership with the Rockstar Energy Husqvarna Factory Racing Team. I’m looking forward to getting back to the races and proving just what myself and the brand can do together.”
Tim Weigand, Manager Race Team HQV: “Watching Trevor develop into a consistent front-runner over the past two years has been a joy. His work ethic, determination and drive are second to none and I firmly believe we haven’t seen the best of him yet. We are extremely excited to have Trevor continue his journey with the Rockstar Energy Husqvarna family.”
The Rockstar Energy Husqvarna Factory Racing Team will head to Society Hill, South Carolina on Sunday, May 31 for Round 5 of the GNCC Series with XC2 250 Pro rider Craig DeLong. 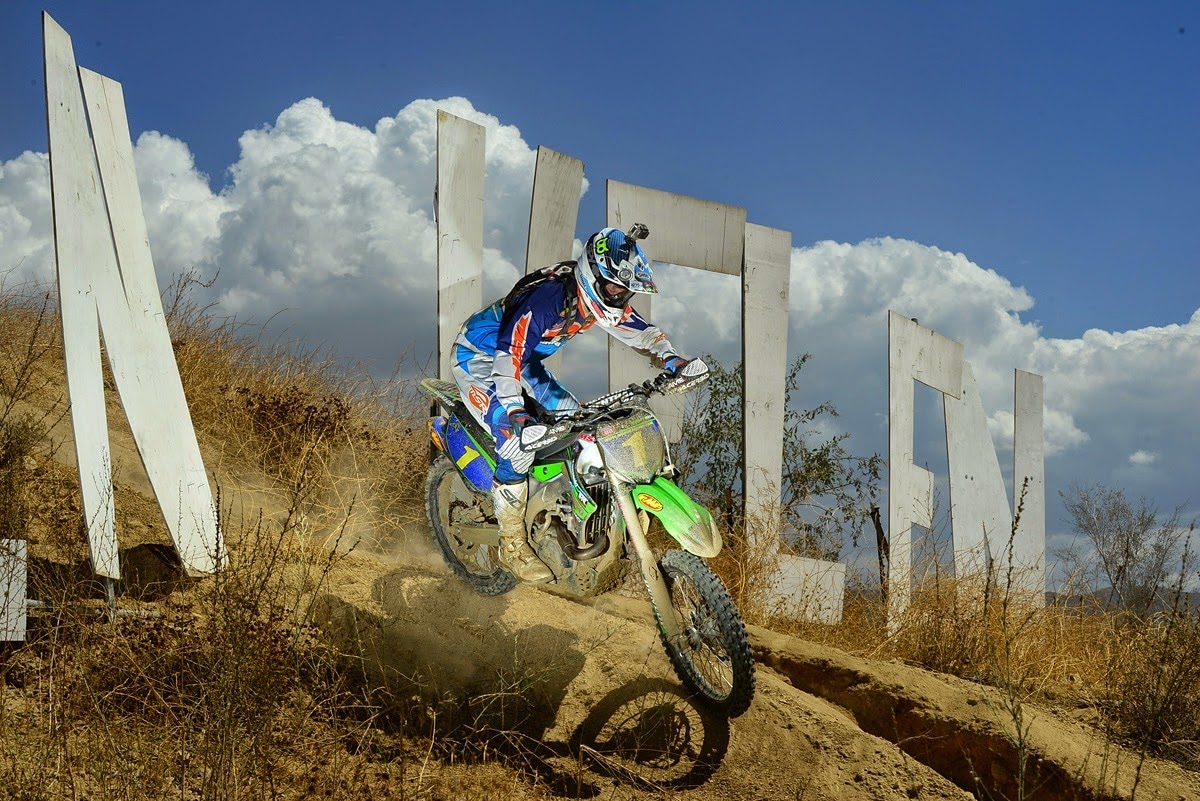 A random hard drive search turned up this shot of Robby Bell flying through the Glen Helen sign at a WORCS race in 2014. After years of chasing the likes of Kurt Caselli Ricky Dietrich and Nate Woods, Robby broke through to win his first championship in 2013. He was second to Gary Sutherlin in 2014, but came back to win the next two years in a row.

At the final National Motocross in 2005, Ricky Carmichael ran his Motocross des Nations number. A few weeks later, he went to Ernee, France with Kevin Windham and Ivan Tedesco to begin the U.S. Team’s second great winning streak. American riders won seven in a row until that streak ended in 2012 at Lommel, in Belgium. The U.S. has not won since.

Going back a little farther in time, Kyle Lewis displayed another American flag motif at the Cup of Nations, held in 2002 at Glen Helen. The Motocross des Nations, which was to be held in the U.S. that year on the Soboba Indian Reservation, was canceled at the last minute. A number of international teams were already en route to the U.S., so Bud Feldkamp and Greg Primm put together an impromptu race with a sizable purse. Lewis, Tim Ferry and Sean Hamblin were on the U.S. team. The Australian team of Chad Reed, Michael Byrne and Craig Anderson won.

Now, going back 20 years we have this image of Rodney Smith at one of the very first WORCS races. In 2001, there was no RM-Z450, CRF450R or KX450F. The only four-stroke in the racing game was the Yamaha YZ400F. Suzuki had the DRZ400 off-road bike and decided to use it at the platform in western off-road racing. Team manager Mike Webb handed the bike to Yoshimura and said “do whatever it takes.” The result was the bike that Rodney Smith and Mike Kiedrowski raced for a number of seasons. Kiedrowski won the title in 2001 and 2002.