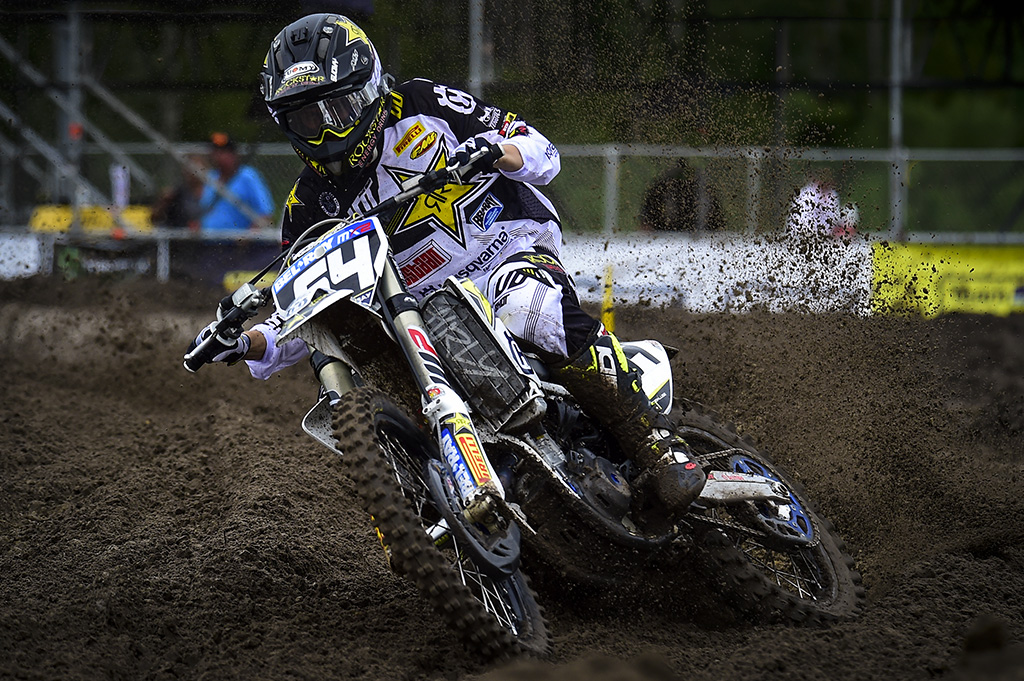 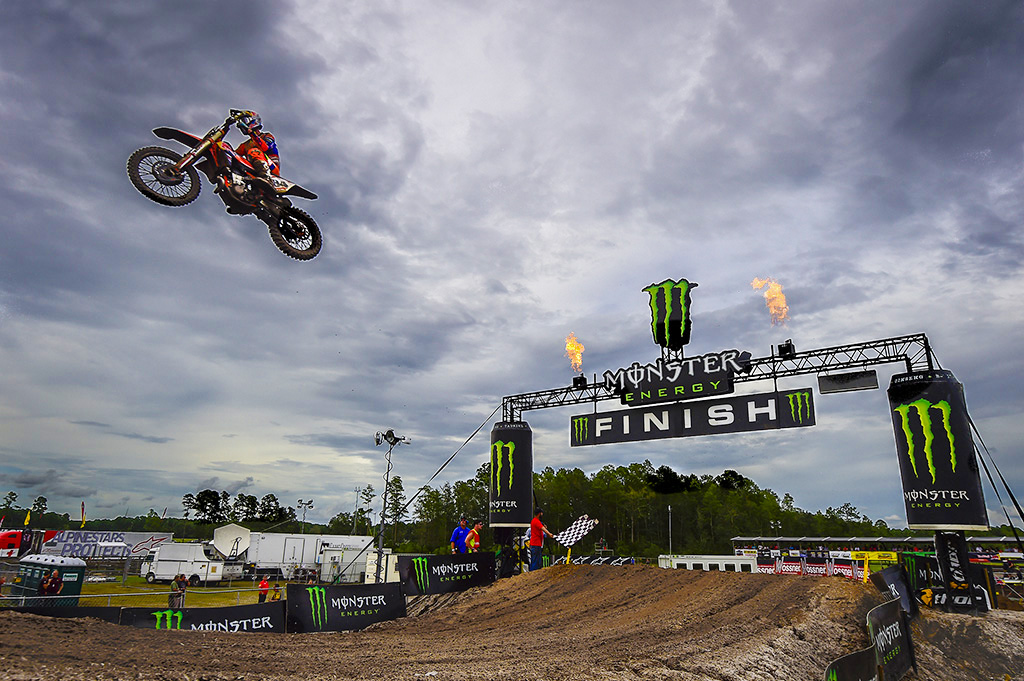 WW Motocross Park, Jacksonville (USA), 2 September 2017 – The world class racing has begun at the Monster Energy MXGP of USA in Jacksonville, Florida. The WW Motocross Park hosted the first of the weekend’s epic race days where the best riders in the world are coming together for MXGP racing. In what was only a sample of the epic battles expected to take place tomorrow, the moist sand of the circuit played well into the hands of Qualifying Race winners Red Bull KTM Factory Racing’s Jeffrey Herlings and the Belgium based American rider, Rockstar Energy Husqvarna Factory Racing’s Thomas Covington. 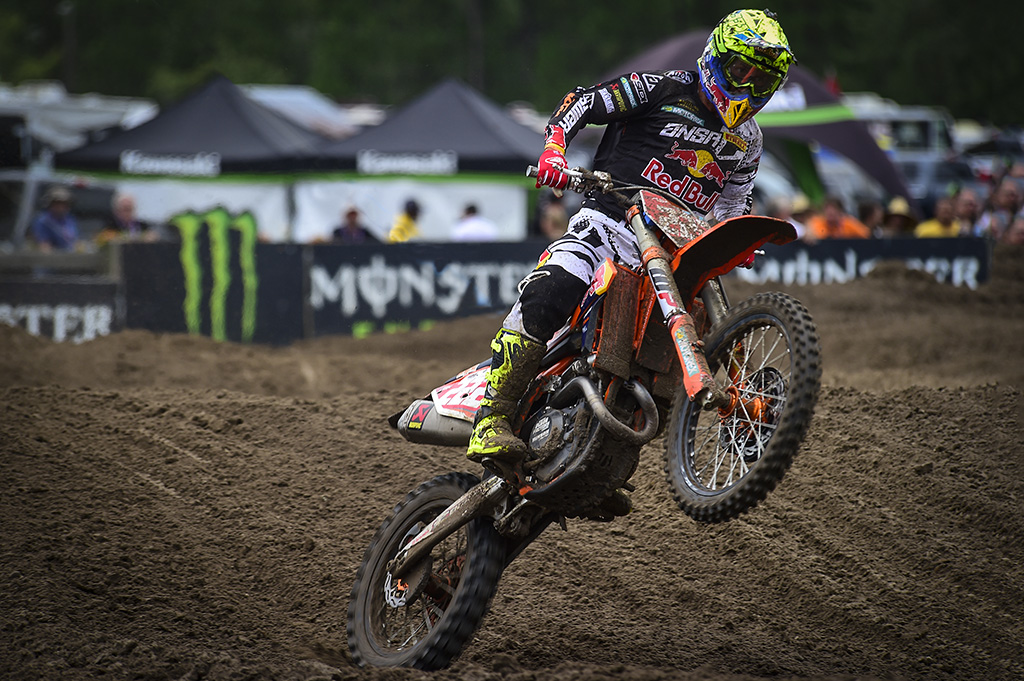 MXGP Qualifying shot out of the Monster Energy starting gates and down the long start straight and sweeping left turn. Leading the field was Monster Energy Yamaha Factory Racing MXGP’s Romain Febvre. Febvre carried slightly to much speed through the sweeping rollers however and faded out to the edge of the track allowing Red Bull KTM Factory Racing’s Antonio Cairoli and Jeffrey Herlings past.

Cairoli took the premier position to start the race with Herlings behind. Cairoli faced an early challenge from the #84 but a mistake from Herlings allowed him to pull a gap. Behind the front three was Autotrader/JGR/Suzuki Team’s Justin Barcia and Monster Energy Yamaha Factory Racing MXGP’s Jeremy Van Horebeek.

Barcia led the Yamaha rider for the first four laps but was eventually passed and shortly after came together with Rockstar Energy Husqvarna Factory Racing’s Gautier Paulin as both where trying to slow down for a down lapped rider. Paulin remounted to finish 8th but Barcia would pull off and take 34th.

Meanwhile Monster Energy Kawasaki Racing Team’s Eli Tomac was battling his way back from a poor start. While the #3 had a good jump off the grid, into the first corner he got caught up in a bottle neck. Coming across the finish line for the first time Tomac was 14th. The Kawasaki rider tried to push forward but to little avail finishing in 12th.

One rider who was able to move forward after the start was Rockstar Energy Husqvarna Factory Racing’s Max Nagl. Nagl started the race in 8th but had a strong lap 5 where he passed four riders to move into 4th position which he held to the finish.

Back at the front Herlings closed back in Cairoli and the battle between the two title contender was on! Eventually on lap 5 Jeffrey Herlings and Cairoli were split by a lapped rider but when they had both made it by him Herlings was the new leader out braking Cairoli into a corner. Herlings not only held the lead but grew it to over 19 and a half seconds at the finish. Herlings in the press conference said: “We had a good Qualifying Race obviously, the start was really good actually I was second or third and I managed to pass both Febvre and Cairoli on the first lap, but I made a little mistake and Tony jumped back by. I was very excited about today, we were fastest in both practices and then I won the qualifying race, I feel physically strong, mentally strong, and I can’t wait for the gate to drop tomorrow.”

In MX2 the American MX2 rider, Rockstar Energy Husqvarna Factory Racing’s Thomas Covington, stole the show at his home GP. Covington started the race with a holeshot and never looked back continually growing his lead and then maintaining it even mentioning that he conserved energy in his 6 second victory over the rest of the field.

Racing into the second position in surprising fashion was the American professional rookie, Yamalube Star Racing Yamaha’s Justin Cooper. Cooper held the position from the first lap with standing charges from several competitors while at the same time managing to keep Covington honest.

Behind Cooper in the beginning stages of the race was Rockstar Energy Husqvarna Factory Racing’s Thomas Kjer Olsen and Red Bull KTM Factory Racing’s Jorge Prado Garcia. Olsen made a few stabs at Cooper while at the same time Prado challenged Olsen but all attempts fell short.

Instead the successful charge came from the teammate of Prado, Red Bull KTM Factory Racing’s Pauls Jonass. Jonass ran 5th the first 7 laps and at times was quite far back from Prado but on lap 8 he made it by the younger Spaniard. 2 laps later Jonass came out ahead of a wheel to wheel battle with Olsen for third.

In the end Prado took fifth led by Olsen, Jonass, Cooper, and the race winner Thomas Covington. Covington in the post race press conference said: “I feel really good, today went pretty much perfect, I had a little issue in the Free Practice but then for the Timed Practice I came out there and set in a good time right at the beginning of the practice. In the qualifying race I just pulled a holeshot, which I think was really important and I just tried to save some energy for tomorrow, just ride smooth and not make any mistakes.”