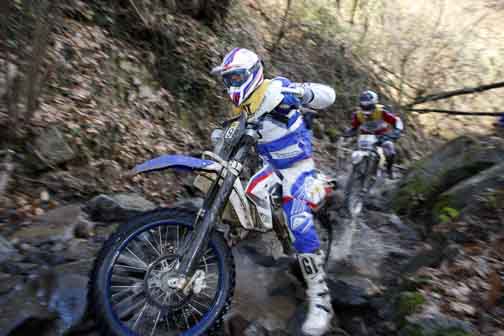 Share FacebookTwitterGoogle+ReddItWhatsAppPinterestEmail
Just one week after claiming a solid runner-up position in the Indoor Enduro World Cup Polish extreme enduro star Taddy Blazusiak has won the gruelling Hell’s Gate event in Italy. Victor for the second consecutive year the KTM Factory Enduro Team rider finished the two-stage event as winner of both the morning qualifying enduro before going on to top the main Hell’s Gate race. Finishing alongside Taddy on the podium were Italian Alessandro Botturi and Britain’s Dougie Lampkin.

Conditions at the ’09 running of Hell’s Gate were bitterly cold, with temperatures barely rising above freezing during much of the near nine hours of competition. Making the ’09 event especially challenging was the fact that the ground was frozen solid, making not only the slow-speed, technical sections of the course difficult, but also the higher speed tracks and trails.
Despite a ‘big crash’ during the morning enduro when Taddy hit a large patch of ice, two winning special test performances and one runner-up result ensured that Taddy started the main Hell’s Gate event on pole position. Faced with four laps of a lengthened Hell’s Gate course Taddy made the most of his advantage and opened up an early lead as the rest of the 30 competitors jostled for position.
Ahead at the end of the first lap Taddy dropped back to the runner-up position on lap two when he found himself stuck while riding up one of the many riverbeds. Struggling to push his bike free due to his painful wrist, Taddy dropped between two and three minutes behind Botturi before catching and passing the KTM mounted Italian. Once again out front Taddy made no further mistakes and started to pull away from the riders behind him.
Knowing that even the smallest of falls could be costly Taddy maintained a steady pace as darkness started to fall and reached the event’s finish line – Hell’s Peak – having successfully negotiated the fourth and final lap. Claiming his second consecutive Hell’s Gate victory Taddy finished around eight minutes ahead of Botturi with Dougie Lampkin a few minutes behind.

Taddy Blazusiak: “This year’s event was really, really tough. The course was frozen slid everywhere and incredibly slippery in places. I had a big crash, like lots of riders in the morning qualifying event, and hurt my right wrist and fingers. That made it really hard for me. But of course it’s great to win again. The morning event went well. I felt good and despite my big crash I won two of the timed special tests and finished second on the last one. You couldn’t relax anywhere because when you did the frozen ground would catch you out. Finishing in front of some of the World Enduro Championship riders was good, but the main thing was that I qualified on the first row for the main race, which I did.
“I got a good start and opened up a bit of a lead off the start in the main race, but with the conditions it was easy to make mistakes. My wrist was giving me a lot of pain but I was riding as hard as I could. I made a mistake on the second lap, which allowed Alessandro Botturi to pass me. He was riding really well so I had to push hard to catch him. Once I did I moved past quickly and again tried to push as hard as I could. I guess I managed to open up a pretty good lead and on the third lap I was just trying not to make too many mistakes. The last lap was tricky because the track became even more slippery in places once the sun went down. I managed to stay upright and got to the finish on one piece. It’s great to have won Hell’s Gate again.”
Andreas Lettenbichler: “I always knew that the Hell’s Gate event would be tough, but I wasn’t expecting it to be as tough as it was. There was nowhere you could relax because the ground was frozen – you needed to be 100 per cent focused all the time. I’m really pleased to have finished, and really enjoyed the challenge, but I did find it tough.
“Finishing seventh in the morning qualifying enduro was great. It put me in a good position for the start of the Hell’s Gate main race. I didn’t have too many problems in the main race and my bike was great, but it was hard. I pushed as much as I could, and was in fifth for much of the race, but towards the end I was feeling tired. Riding at night was challenging because the terrain was so slippery. To reach the top of Hell’s Peak was a real relief.”