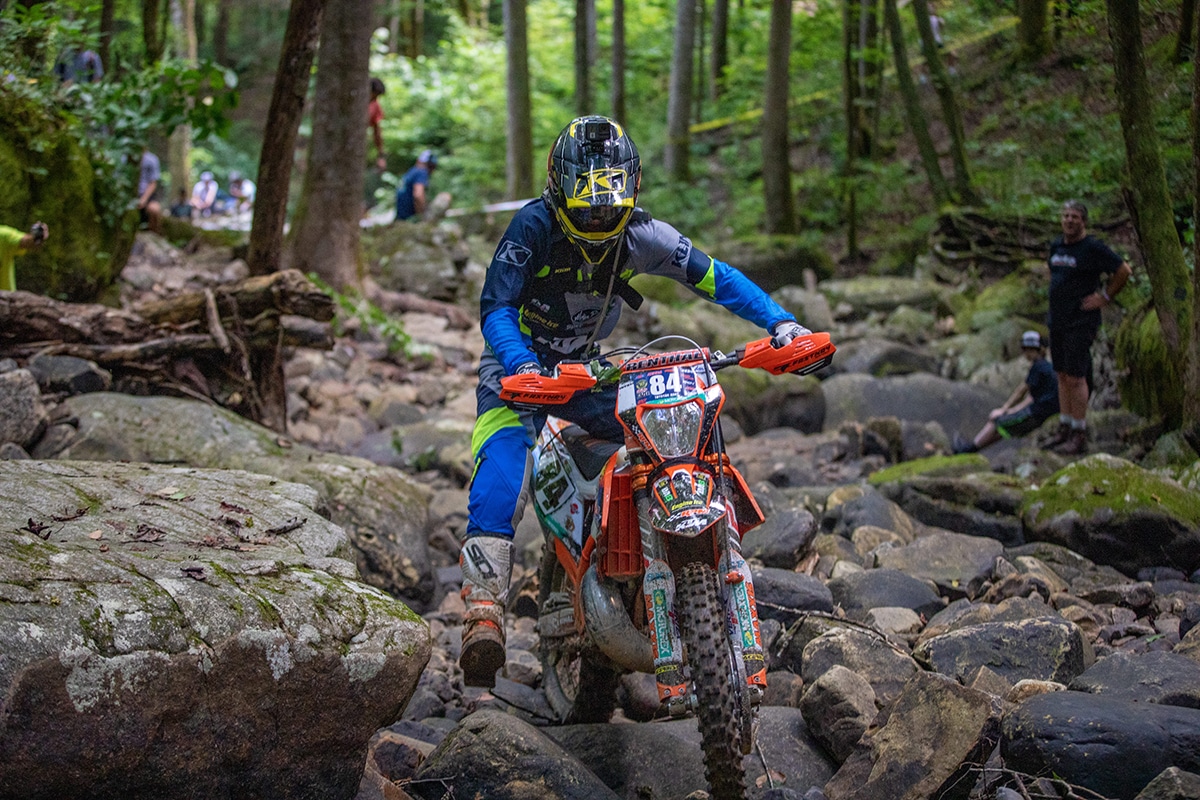 This year marks the tenth annual Kenda AMA Tennessee Knockout Extreme Enduro (TKO); a brutal challenge of man vs machine. Each year come August, the best in the nation show up and try their hand at finishing this now legendary American Enduro.. however nearly half will not finish within the allotted time frame.

The race format consists of continual rounds knocking riders out one by one, until the final TKO on Sunday. It takes place over 3 days at the Trials Training Center in Sequatchie, TN.

The amateur riders who did not already pre-qualify in one of the Sherco AMA East or West Extreme Enduro Series rounds during the season, will race a prologue Friday, and then a series of rounds Saturday, which leaves the top 25 advancing to Sunday’s knockout’s.

This year, the high Tennessee heat and humidity mixed with intermittent rain made for extremely harsh conditions. Each race claimed more and more knock-out victims, until only the top 15 riders remained. One amateur (Will Riordan) would make it to the final heat; a very impressive accomplishment for an amateur class racer! He lined up with the pro’s for the final knockout, which consisted of a 30 min plus one lap winner-take-all loop.

“I feel like I had my best final race ever.” FactoryONE Sherco racer Cody Webb mentioned after the race, “I rode clean and pushed hard, but just couldn’t catch Trystan.”

Coming off of a recent win at Battle of the Goats Enduro, Trystan started off strong taking the W for the hot lap, and simply never letting off from there. He then went on to win both Knockout 1 and 2 (impressive), but it would come down to the final heat to determine who would claim the over-all. At the end of the long weekend, it would be RPM KTM Racing Team rider Trystan Hart standing on top of the RedBull box as the new 2020 TKO Champion.

“In the final I got the hole shot, but Cody was right behind me and pressuring me the whole way.” Trystan told me, “If I would have let up he would have got it.. I was just SO stressed out that whole race. It felt like a 5 hour race!” He never let the stress get to him and stayed ahead of Cody at least 30 seconds each lap, riding nearly flawless the entire round. Cody was always close behind, just waiting on a small mistake to make a move.. which made for a very exciting final round!

When the dust settled, Factory Beta rider Benjamin Herrera would round out the podium with a solid third place finish.

For the Women’s class, Factory Beta rider Rachel Gutish would remain undefeated with her 5th TKO title. “TKO is a very special place for me,” Rachel said. “the pressure is intense and both the track and the competition get gnarlier every year.” Speaking of competition.. the talented KTM rider Shelby Turner from Canada would claim a close second, with Sherco Factory ONE rider Louise Forsley coming in third.