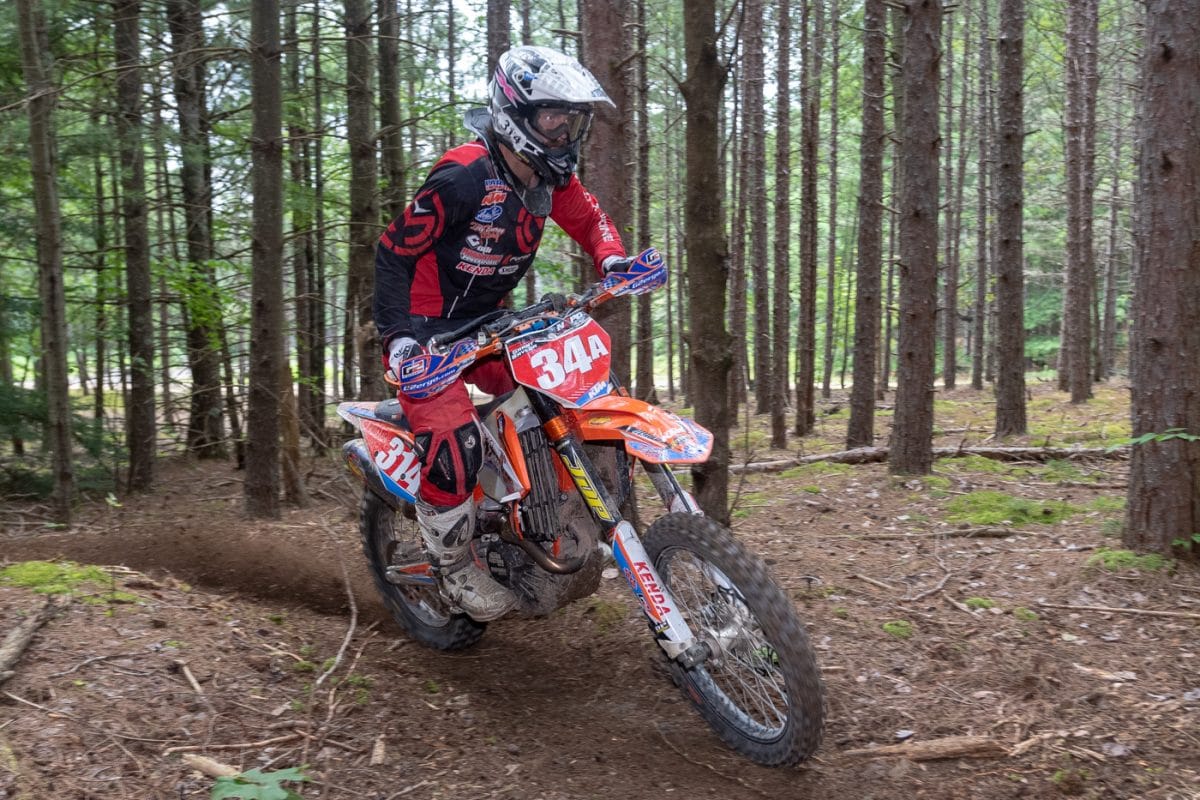 Grant Baylor posted the fastest time in all six tests on his way to the top of the podium at this weekend’s Rattlesnake National Enduro in Cross Fork, Pennsylvania. The Tely Energy Racing KTM rider got faster as the day wore on and he finished the event with a 57.867-second margin of victory over his brother and teammate Steward Baylor.

“I made a couple mistakes throughout the day, but things turned out pretty good,” said Grant. “This is one of my favorite tracks and I always have a lot of fun here. Today was perfect. The dirt was perfect, nice and loamy and tons of traction. Just had a good day riding my bike.”

Steward Baylor never finished lower than third all day and still enjoys a 36-point advantage in the chase for the 2019 title despite finishing second.

Andrew DeLong showed up with his Phoenix Honda CRF450RX GNCC bike and came away with third. The 2014 National Enduro champion loves riding in the rocks and there were plenty at the Rattlesnake.
“I don’t ride Enduros really anymore, so this is cool to come and ride a tight trail and just change it up and have fun,” said DeLong, who finished 31 seconds behind Steward Baylor.

Liam Draper was seventh overall, which gave the Tely Energy Racing KTM rider his first Pro2 win of the season. Draper was sitting as high as third during the first half of the day, but a stick in his rear brake disc cost the New Zealander a lot of time.
GasGas North America’s Thorn Devlin had an uncharacteristic off day and finished eighth. Kyle McDonal was ninth and second in the Pro2 class on a Beta, with Noah Clark finishing 10th and first AA rider on a Yamaha.

Mepmx/Fly/Grizzly Peak/Traveler’s Rest Speedway/KTM’s Mackenzie Tricker had as great day in the Women’s Elite class, taking a 2m 31s victory over Beta USA’s Rachel Gutish. Tayla made her return to competition after having surgery on her hand with a credible third overall on her Rockstar Energy/Husqvarna/Moose Husqvarna.

The Kenda AMA National Enduro Series returns to action on August 25th at the Little Raccoon Classic National Enduro in Wellston, Ohio. For more information on the series go to www.nationalenduro.com.