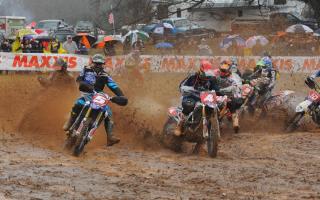 WASHINGTON, Ga. (March 16, 2014) – Following a dry and sunny day of ATV racing on Saturday, Round 2 of the 2014 AMSOIL Grand National Cross Country Series presented by Maxxis, an AMA National Championship, resumed on Sunday with the motorcycle portion of the weekend. Heavy rainfall infiltrated the grounds of Aonia Pass MX Park in Washington, Ga., creating extreme conditions for the pro race. Reigning champion Kailub Russell emerged victorious after battling it out for the overall lead with defending XC2 Pro Lites Champion Grant Baylor in the final moments of the race.

Russell wasn’t out front for most of the race, but the Factory/FMF/KTM rider pulled it together in the end to secure the overall win to gain thirty points towards the championship chase. It wasn’t without a fight from his KTM teammate and XC2 Pro Lites rider Grant Baylor, who quickly joined the overall battle on adjusted time. Since the second row takes off approximately one minute behind the XC1 Class, perhaps Baylor had an advantage in making his way through the pack.

‘Last night I was hoping it would hit us hard with the rain because I was looking forward to a mud race,’ Russell said. ‘We changed some things on the bike and it worked out because got some points on Charlie,’ Russell said.

Before the 1 p.m. race began, the GNCC Course Marshalls decided that the race would be shortened to a minimum of two hours due to the heavy rainfall throughout the day. With the leader coming in at 2:17:54, Sunday’s race was just short of a typical three-hour GNCC.’Last night I was hoping it would hit us hard with the rain because I was looking forward to a mud race,’ Russell said. ‘We changed some things on the bike and it worked out because got some points on Charlie,’ Russell said.

Rocky Mountain ATV/MC’s Josh Strang grabbed yet another $250 All Balls Racing XC1 Holeshot Award with his AmPro Yamaha teammates Paul Whibley and Jordan Ashburn close behind. It didn’t take long for guys like Factory FMF/KTM’s Charlie Mullins and the XC2 front-runners of Grant Baylor and Maxxis/KLIM/DirtWise KTM Race Team’s Rory Mead to join the Yamaha riders in the lead battle, where a chaotic chain of events unfolded until the end.
It was Russell who held strong in the final moments, where he laid down his fastest lap of the day on Lap 5 with a 26:59.7. For that, Russell took home an extra $150 with the KR4 Performance Fastest Lap Award en route to his first win of the season.

‘You know, I put myself into these positions where I have to win and I just have to dig deep and keep plugging away to get that points lead,’ Russell added.
Despite a valiant effort from the second row, Grant Baylor missed the overall victory by only four seconds after time adjustment.

‘I was definitely going after the overall and I’m upset I didn’t get it but it was a good points ride today,’ said the XC2 winner. ‘The last three laps I didn’t have any brakes at all and then I got stuck a few times on the last lap so I lost that minute for the overall but I’ll just have to come back and get it next time.’
Ashburn put himself into podium contention right away as he latched onto the lead pack on the opening lap. Ashburn showed his strength in the tough conditions, moving up to the second place position just after the halfway mark. Although Baylor finished ahead of Ashburn in the overall, the Tennessee native took second place in the XC1 Class, finishing less than one minute behind Russell, and third overall for the day.

‘I had a pretty good day, just tried to pick good lines and run my own race,’ Ashburn said. ‘It feels really good to be back on the podium again. I’m just looking forward to see what the rest of the year has in store.’
Whibley came in for fourth overall just six seconds behind his teammate Ashburn, while Strang captured fifth overall for the day.

Paul Whibley:
‘Today was really good,’ Whibley said. ‘I had no idea what was going on out there, I guess I was leading at some point. It’s one of those days where you have to just keep going, survive and have fun.’

While it wasn’t ideal for the Round 1 winner, Mullins finished sixth overall to salvage points and maintain the lead after two rounds of racing.
Factory FMF/KTM’s Steward Baylor secured sixth place in XC1 and eighth place overall for the day despite running into issues with his vision. Johnny Campbell Racing (JCR) Honda’s Chris Bach took seventh in the class and ninth overall, while Rockstar Energy/WMR/KTM’s Ryan Sipes finished eighth in the class and fourteenth overall for the day.