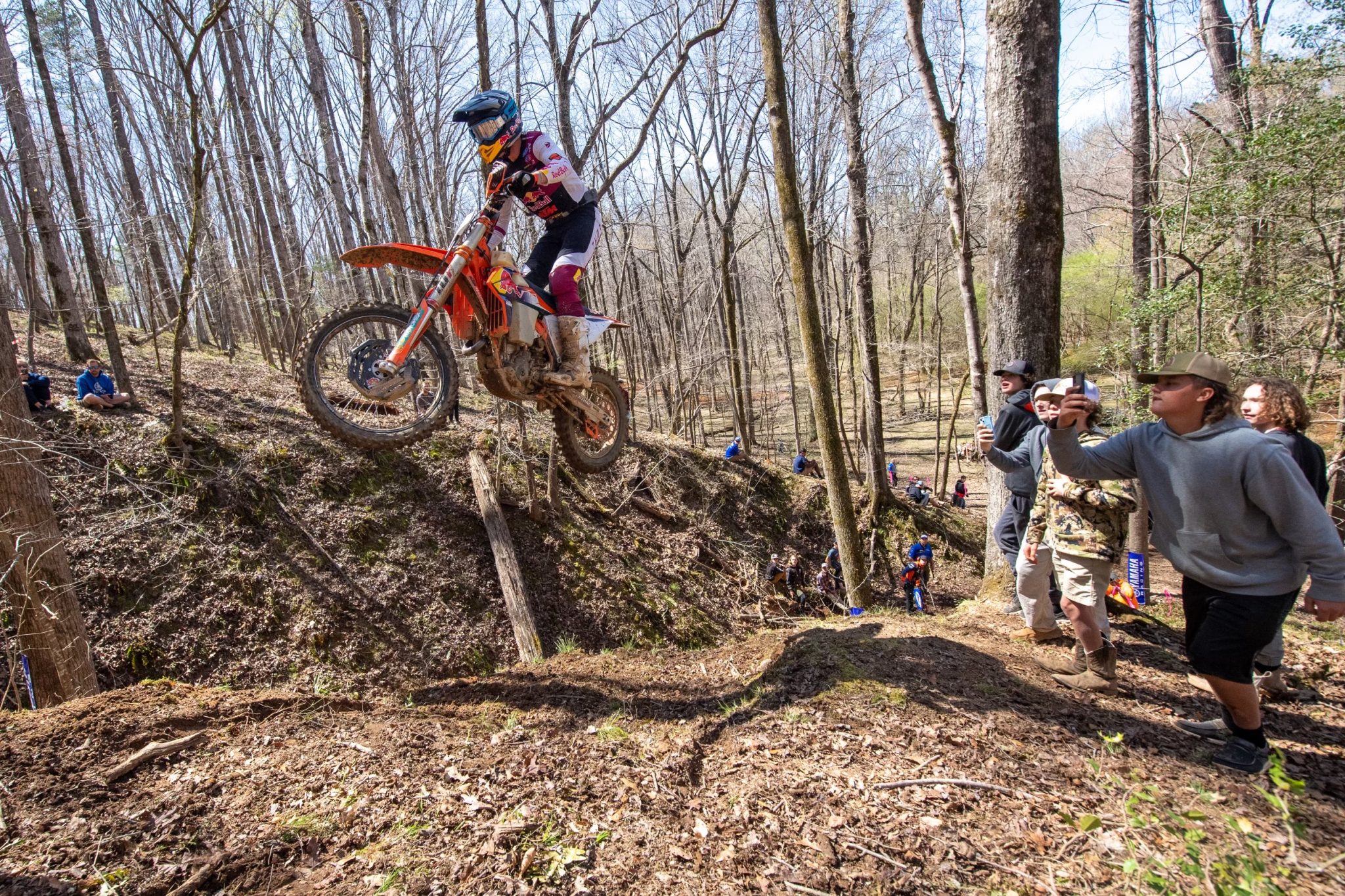 Big Buck Farm hosted round four, Dunlop Tire Tiger Run, of the 2022 Grand National Cross Country (GNCC) Series presented by Specialized, an AMA National Championship, this past weekend, March 27. The mild and sunny conditions made for a great day of racing through the South Carolina trails, and after three hours of intense battles it was FMF/KTM Factory Racing’s Benjamin Kelley taking home his fourth consecutive win of the season.

Jordan Ashburn jumped out to grab $250 All Balls Racing XC1 Pro Holeshot Award aboard his Magna1 Motorsports/Husqvarna-backed machine. Kelley was in tow, but as they emerged from the woods Kelley would move into the lead position with Ashburn about 12 seconds behind him.

As the race continued on, Kelley would begin to settle into a pace as he maintained the lead over Ashburn and the rest of the XC1 Pro field for the duration of the race. Kelley would come through after seven intense laps to earn his fourth consecutive overall win of the season. Kelley maintains the points lead by 38 points after four rounds of racing.

Ashburn continued to push in the second place position but would find himself unable to catch Kelley to battle for the lead. Ashburn would cross the line to earn his best finish of the season thus far, second overall. This is Ashburn’s third appearance on the podium in four rounds, and he currently sits second in the points standings.

Rockstar Energy Husqvarna Factory Racing’s Trevor Bollinger battled back from his sixth place start on lap one to round out the podium with a third overall. Bollinger, who had been plagued with a knee injury in 2020 and the beginning of 2021, had not been on the podium since the 2019 season and is now looking to be back to where he was before missing that year of racing.

Landing just off the podium in fourth, Rockstar Energy Husqvarna Factory Racing’s Craig DeLong was battling back-and-forth for the duration of the race. DeLong would drop back to fifth on lap three, but he would dig deep and make his way back into fourth and continue to hold that position until the checkered flag flew.

Rounding out the top five in XC1 was South Carolina’s own, Rev Motorsports/GASGAS Racing-backed racer Grant Baylor. Baylor would alternate between sixth and fifth for the first half of the race, but as the white flag flew Baylor would hold onto that fifth place in the XC1 Pro class until he crossed the finish line. Cobequid Mountain Sports/GASGAS Canada’s Tyler Medaglia came through to earn sixth in XC1, his second top-10 finish of the season. Medaglia continues to improve in the series and did again throughout this past weekend’s three-hour race as he started the day off in eighth place.

Starting off his day inside the top-five was FMF/KTM Factory Racing’s Josh Toth. As the race wore on Toth would battle just outside podium contention before dropping back to seventh. Toth would be able to charge back to fifth about halfway through the race, but after a couple racing incidents later in the race he would come through to earn seventh in XC1, 10th overall on the day.

Gnarly Routes/KTM Racing’s Russell Bobbitt made his way back to GNCC Racing this weekend in South Carolina. Bobbitt would have a mid-pack start but would find himself back in ninth as they came through timing and scoring on lap one. Bobbitt would continue to push for the next three hours, but he would cross the line eighth in XC1 at the end of the day.

Earning ninth in XC1 was the Swedish racer, CEC Motorcycles/GASGAS Scandinavia’s Rikard Hansson, who was pitting with the Coastal GASGAS Factory Racing team for the first four rounds of the season. Then rounding out the top 10 was AmPro Yamaha’s Layne Michael, who returned to racing this round from a lingering shoulder injury. Michael would have a good start to the day as he came through in third place for the first two laps. However, after lap three he would check in at the sixth place position but would then withdraw early from the race.

As the second row took off it was the Magna1 Motorsports/Husqvarna’s Jack Edmondson who earned himself the $250 STACYC XC2 250 Pro Holeshot Award. When the group emerged from the woods on lap one it was the AmPro Yamaha rider of Mike Witkowski leading the way. But as time wore on Babbitts Online/Monster Energy/Kawasaki Team Green’s Lyndon Snodgrass would continue to push onward as he closed in on Witkowski.

Witkowski would be unable to hold off Snodgrass and as they came through on lap three Snodgrass would hold the lead with a three second gap between himself and Witkowski. On lap four Witkowski would encounter a vine which caught his leg pulling him from the bike and setting him back for the remainder of the race. Snodgrass would continue to push his way towards the front, running fourth overall on adjusted times, and crossing the finish line with a 42 second gap.

Phoenix Racing’s Ruy Barbosa battled back-and-forth from second to third for the majority of the race, but as he continued to push on, he would hold onto second for the last three laps of the three-hour race. Barbosa would come through to earn second in the XC2 250 Pro class, while RPM/KTM Racing’s Angus Riordan made his way from the back of the pack to land his first XC2 and GNCC podium ever.

In the FMF XC3 125 Pro-Am class it was the KTM-mounted rider of Chase Gosselin grabbing the gas and earning the $100 Lojak Cycle Sales XC3 Holeshot Award. It wouldn’t take long for the Magna1 Motorsports/Husqvarna’s Brody Johnson to find his way back to the front of the pack after earning the win at the same location back in February. Johnson would lead the FMF XC3 class from start to finish as he came through with over a five minute lead on the rest of the competition.

Carolina XC/Moose Racing/XC Gear’s Zack Hayes would battle in the second place position with Motorcycle Enthusiast Inc/Moose Racing/MX Tech’s Hunter Neuwirth for majority of the race. Hayes would continue to hold onto second for the remaining laps of the race with Neuwirth rounding out the top three as he came through 22 seconds behind Hayes in South Carolina.

As the morning race got underway and the WXC line took off it was Trail Jesters KTM Racing’s Korie Steede grabbing the $100 Trail Jesters WXC Holeshot Award. However, it would soon be AmPro Yamaha’s Rachael Archer making her way into the lead position for the first two laps. Archer would suffer a bent sprocket while out on lap two and would have to sit back as she watched her team swap out the back wheel of her motorcycle, costing her valuable time. Archer would remount her machine, but she would only be able to make up time to take 10th place in the WXC class.

Steede would then begin to battle with Fly Racing/Oakley/FMF/KTM Racing’s Brandy Richards for the first place position as the two moved into first and second. Richards would hold the lead over Steede, but as the white flag flew Steede would put her head down and push. Steede would battle back to earn her first-ever WXC and overall win.

Richards tried to battle back, but she would ultimately come through earning her first GNCC WXC podium finish in second overall on the day. Rockstar Energy Husqvarna/Surge Off-Road Coaching Team’s Tayla Jones rounded out the WXC class podium, and now sits tied in the first place position with Steede for the WXC points lead with Archer sitting third just one point behind them.

In the 8 am. Youth race it was Team Green Kawasaki’s Nicholas DeFeo earning his fourth youth overall and YXC1 Super Mini Sr. class win of the season. DeFeo leads the way in the youth ranks through the first four rounds of the year. Peyton Feather and Sawyer Carratura battled back to round out the top three youth finishers and YXC1 podium.

The 65cc (10-11) class saw Landon Husted take the win, as Levi Rains came through to earn the 65cc (7-8) class win. Karson George came back and won the 65cc (9) class after earning the MXC1 class on Saturday. The Girls Sr. class saw Addison Harris earn the win, while Paisley Harris would battle back to take the Girls Jr. class win. In the Trail Rider class, it was Tristan Vassey coming through to earn to earn the win in his first race of the season.

In the Micro Bike race on Saturday morning, it was Trason Landrum coming from the second row, MXC2 class, to earn his first Micro Overall and MXC2 class win. Landrum recently took home the win in Indianapolis during the KTM Junior Racing Supercross event and would lead from start to finish in today’s race.

Hunter Jones would come through to earn second in the MXC2 class, as Levi Rains came through earning third in MXC2. As the 50 Sr. 1 class came through it would be Davey Fairfield earning the win, with Tripp Lewis coming through to earn the 50 Jr. 1 class win. The 50 Sr. 2 class was won by Daxton Mullins, and the 50 Jr. 2 class was won by Jax Jordan. In the Micro Shaft Drive class, it was Krew Burns earning the class win, as Colton Propst won the Trail Rider class.

Corey Showalter received the AMSOIL Moto Hero. Showalter is 30 years old and from Beckley, West Virginia. He serves in the United States Army as a Staff Sergeant (SSG) and has been deployed multiple times with his last deployment being in Afghanistan. Showalter will receive a $250 AMOSIL Shopping Spree, set of Kanati Truck Tires courtesy of GBC, 100% camouflage goggles and a commemorative American Flag from Columbia Sign & Co. along with a $200 Gift Certificate from them.

The GNCC Series will return to racing on April 9-10 with the FMF Camp Coker Bullet in Society Hill, South Carolina at Moree’s Sportsman’s Preserve. More information on the event can be found online HERE.