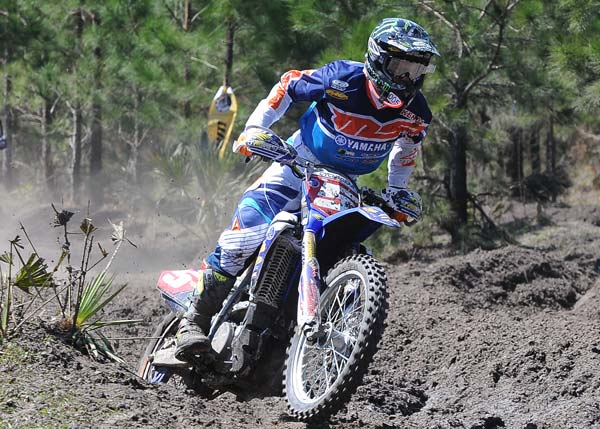 Here’s a quick hit look at the front runners from Round one of the Amsoil sponosored GNCC held at the Mud Mucker arena in Florida. Photos spit out of TWebb’s Nikon. He hopes that some are in focus!

Reigning champion Kailub Russell started off with a first turn crash, worked towards the front only to struggle late in
round.

Paul Whibley returned from some physical ailments last year to dominate the early running of the GNCC event. He
had rear brake problems late in the race.

Charlie Mullins definitely finished strong following a first turn crash that left him mired in the back. He was one of
the few that seemed to easily move through traffic on the ‘very tough’ Mud Mucker circuit.

Josh Strang looked at home on his Am Pro Yamaha, finishing third.

JCR Honda racer Chris Bach battled near the front all day only to drop back late in the race.

Thad Duvall finished less than a second off the podium. He looked good and was a player all day.

In the XC2 Lites Rory Mead moved into the lead late in the race on his Shane Watts KTM. He finished 8th overall.

After leading for most of the day Ricky Russell finished a hard fought second in the XC2 Pro Lites.

Grant Baylor sucked it up in the XC2 Pro Lites by grabbing 6th in class.

Former motocross pro Ryan Sipes was a contender all day (up to second at one point) but fell off late in the race to
finish 8th in class.

TONY CAIROLI IS BACK!