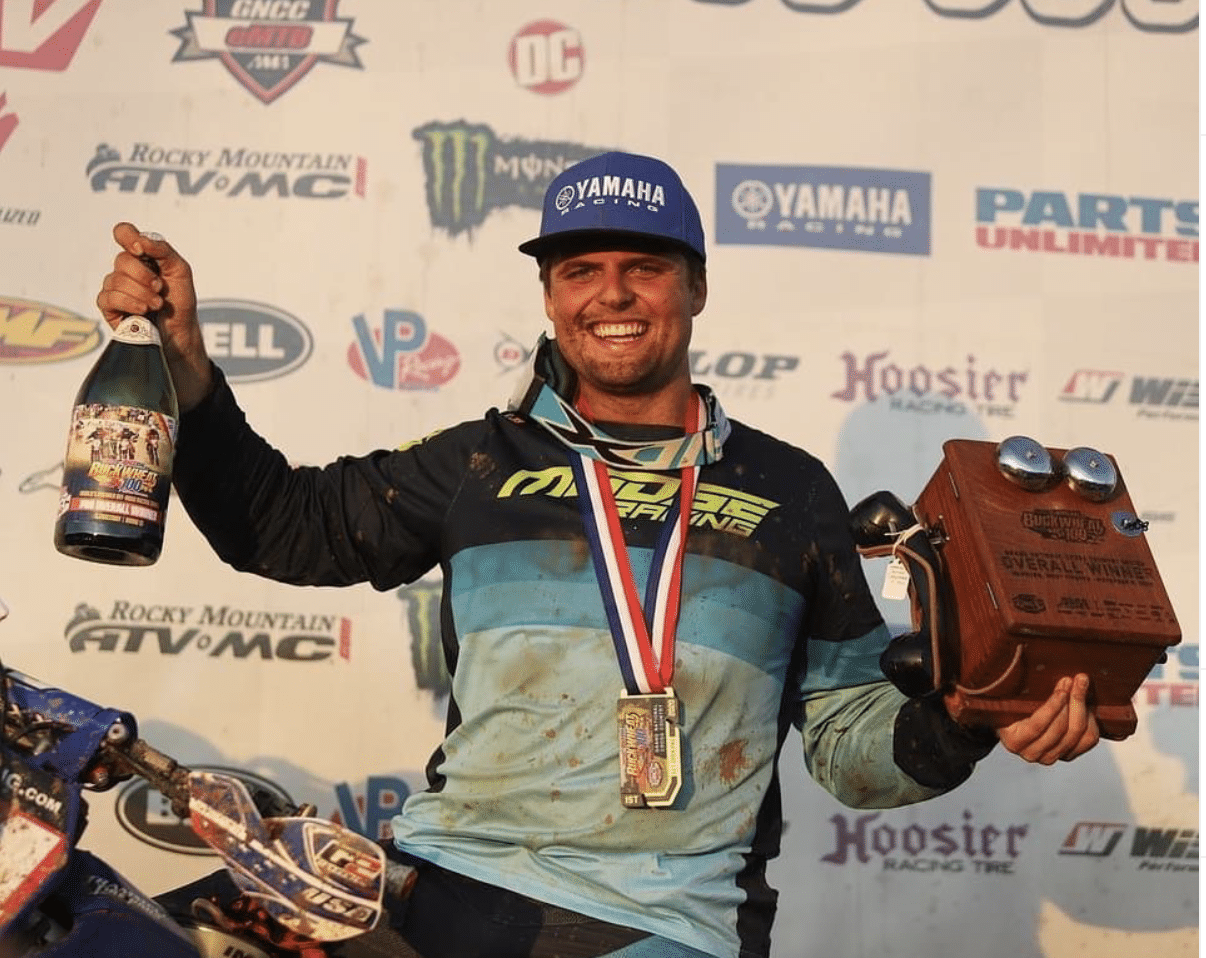 The 2020 Grand National Cross Country (GNCC) Series presented by Specialized, an AMA National Championship, finished out its season on Sunday, November 8, 2020 with the inaugural AMSOIL Buckwheat 100 event in Newburg, West Virginia. With unseasonal weather throughout the entire weekend, temperatures in the high 70’s helped heat up the season finale of racing.

After three-hours of intense racing at the GNCC season finale it would be AmPro Yamaha’s Steward Baylor Jr. standing atop the podium for his fourth overall win of the season. Baylor would battle throughout the day and he would ultimately cross the finish line second, however, FMF/KTM Factory Racing’s Ben Kelley, who crossed the finish line first, was given a one position penalty placing him second overall.

Kelley would work his way back from a fourth place start on the opening lap, moving into third and then second before battling for the lead position. Baylor and Kelley would continue to engage in a heated battle all the way to the checkered flag.

Babbitt’s Online/Monster/Energy/Kawasaki’s Jordan Ashburn got a great jump off the line grabbing the $250 All Balls Racing XC1 holeshot award. Ashburn would lead the pack of XC1 Open Pro riders into the woods, and he would continue to lead the race for the first two laps of racing. Ashburn would then fall back to third overall, but he would push for the remainder of the race to hold onto that final podium position.

Earning fourth overall on the day was FactoryONE Sherco’s Grant Baylor. When the green flag flew, Baylor found himself towards the back of the pack but would battle throughout the day to make his way up front. Baylor physically crossed the finish line in fifth, but after a penalty to a fellow XC1 competitor he would be credited with fourth at the final race of the 2020 GNCC season.

Rounding out the top five overall finishers was AmPro Yamaha’s Layne Michael. After working his way up to fourth from a seventh place start to the day, an on track incident would move him back to fifth overall. This is Michael’s third-straight fifth place finish overall. Michael remains seventh in the points standings for the XC1 Open Pro class.

Three riders will be credited with eighth place finishes after reviewing and assessing penalties on the day. Phoenix Honda Racing’s Andrew Delong was having a good race running sixth as the checkered flag flew, however Delong was penalized two positions for two separate on-track occurrences. Rockstar Energy Husqvarna Factory Racing’s Thad Duvall found himself running in second during the first part of the race, though as he came around on lap four, he would find himself running ninth. Duvall put his head down and pushed making some necessary passes but would ultimately be one of the three riders credited with an eighth place finish after crossing the line in seventh.

As the checkered flag waved, Babbitt’s Online/Monster Energy/Kawasaki’s Josh Strang physically crossed the finish line ninth overall but would be credited with an eighth place finish on the day. As the two lap board came out Strang found himself running fourth, but on that lap, he would have to make a longer-than-normal pit stop as he had found that his rear brake line had burst.

Rockstar Energy Husqvarna Factory Racing’s Trevor Bollinger made his return to the GNCC Racing circuit after missing the season due to a knee injury. Bollinger was off to a good start as he ran inside the top five for the first part of the race. As the checkered flag flew Bollinger would be credited with a ninth place finish on the day, after a one position penalty was assessed. Rounding out the top 10 in the XC1 Open Pro class was KLM Kawasaki’s Evan Earl. Earl had a consistent race running inside the XC1 top 10 for the duration of the three-hour race.

Coming into the final round the XC2 250 Pro National Championship was still up for grabs. The battle for the championship was between Rockstar Energy Husqvarna Factory Racing’s Craig Delong and AmPro Yamaha’s Michael Witkowski, with 11 points separating them. As the race got underway it was Sam Evans grabbing the $100 Hot Cams XC2 holeshot award, but it would soon be Witkowski taking over the lead.

Delong would work his way back from a fourth place start to the day to overtake second place with three laps remaining the in the race. As the checkered flag came out it would be Witkowski physically crossing the finish line first, but after a one position penalty he would officially place second in the XC2 class for the day. Delong would come through physically second, enough to earn the XC2 National Championship, but after Witkowski’s penalty he would be credited with the XC2 class win as well as earning his first-ever XC2 National Championship.

Factory Beta USA’s Cody Barnes came through to round out the XC2 class podium after falling back to fifth at one point in the race. Barnes would make the necessary moves through the pack to make his way back to the podium as the checkered flag waved. Barnes finishes out the year fourth in the points standings.

In the FMF XC3 125cc Pro-Am class it was National Champion, Moose Racing/Carolina KTM/XC Gear’s Zack Hayes taking his seventh win of the season after leading all seven laps of racing at the AMSOIL Buckwheat 100 GNCC. Beta USA’s Max Fernandez came through to take second in the FMF XC3 class, followed by Canyon Motorsports/FXR/Enduro Engineering’s Michael Delosa rounding out the top three. Fernandez made the jump to the XC3 class after securing second overall in the 150 A points standings.

Coming through to clinch her first-ever WXC win was Factory Beta USA’s Rachel Gutish. After grabbing the $100 Trail Jesters WXC holeshot award, Gutish put her head down to place a gap over the rest of the WXC field. Gutish would come through timing and scoring with the lead position on all four laps, taking the win by 39 seconds.

After starting out the day third in WXC, BABS Racing Yamaha/Maxxis’ Becca Sheets made the pass for second and set her sights on Gutish. Sheets would ultimately run out of time and cross the line second on the day at the 2020 GNCC season finale. Factory TM’s Korie Steede battled back after falling to fourth at one point in the race to round out the WXC top three in West Virginia.

In the 8 a.m. youth race it was Cole Forbes taking his second-straight youth overall win and YXC1 class win of the season. Chase Landers and Nicholas Defeo rounded out the top three overall finishers, and the top two in the YXC2 Super Mini Jr. class. Wyatt Marshall and Dylan Sharpe finished second and third in the YXC1 class, with Matthew Hallenbeck taking third in the YXC2 class. Peyton Feather came through to take seventh overall and the 85cc (12-13) class win, with Rivers Morris and Colton Shields rounding out the top three in the class.