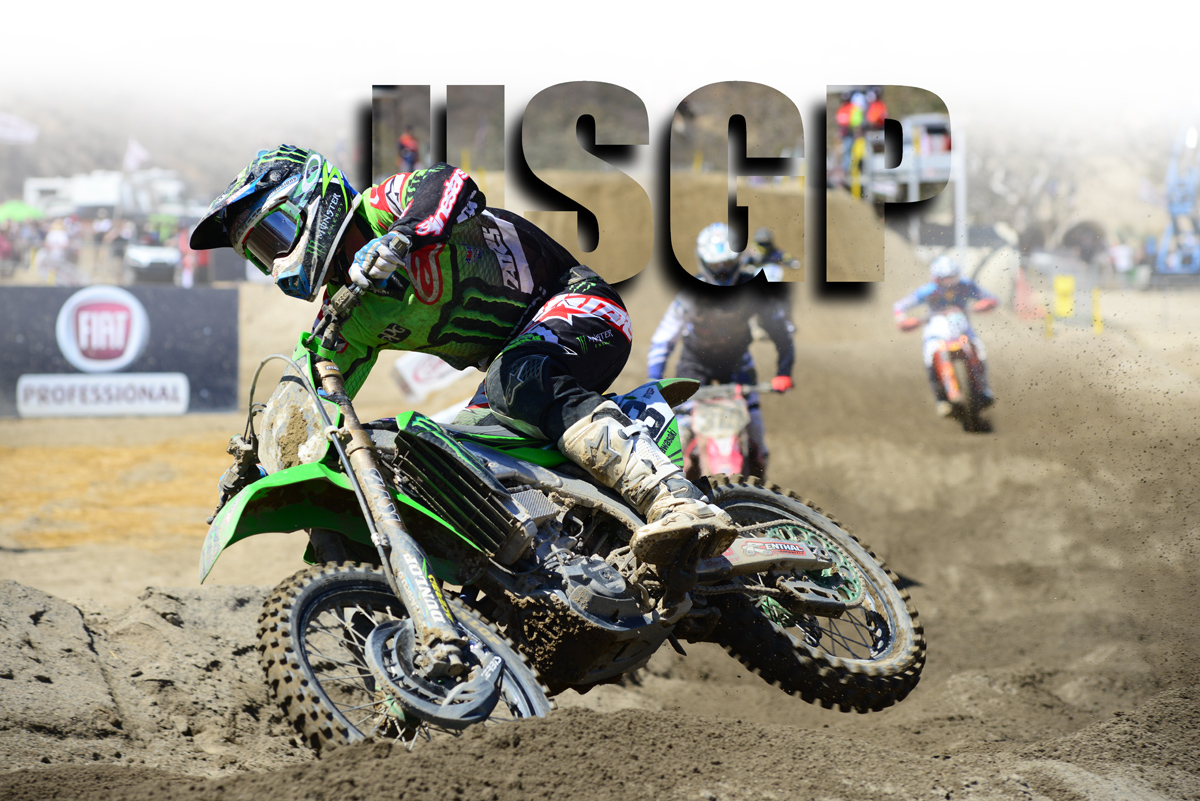 Monster Energy Kawasaki’s Eli Tomac left no doubt about the world pecking order in motocross this weekend at Glen Helen. He dominated both motos of the USGP despite bad starts and even a major glitch in the early laps of moto two. In the 250 class, it was equally decisive for newly crowned MX2 World Champion Jeffrey Herlings. He simply walked away with both motos. Former U.S. 250 National Champion Jeremy Martin adjusted quickly to his new Geico Honda ride and picked up a faint vapor trail from Herlings to finish second overall.

Most of the weekend’s drama centered around how much time it would take Tomac to get into the lead. In moto one he stared in 12th place while Dutchman Glenn Coldenhoff battled with Antonio Cairoli up front. By the end of the first lap, Tomac had cut up to fifth place, and on lap four he was in second. Then an intense battle ensued, as Cairoli picked up the pace to match Tomac, and the two pulled away from Coldenhoff, Max Nagl and new World Champion Tim Gajser. When Tomac finally got into the lead, it was all over. Cairoli backed off and most of the racing was for third. Max Nagl eventually secured that place over Gajser and Belgium’s Jeremy van Horebeek.

The second 450 moto saw Tomac mess up on the first lap, dropping almost to last while Cairoli was up front. Tomac rode even better than he  had in the first race, and was in the lead just after the halfway point.

“I got clipped, but never went down. I ate too much dirt today. The first moto wasn’t so bad. We made a few changes to the bike before the race. I was struggling in the classification race, but  it made a difference. Glen Helen is tough; those were long 30-minute motos. This track is good for more than one line, even the straight with the rollers was a good place for me to pass. I had a lot of fun. Obviously, everyone is really fast and everyone respects each other. It’s clean racing.”

Jeffrey Herlings’ domination of the 250 class didn’t surprise anyone. The fact that Jeremy Martin was second was impressive considering he took four weeks off and was on a new bike. Also having a breakout ride was Star Racing’s Mitchell Harrison, who finished with two fourths for third overall. Pro Circuit’s Austin Forkner had a great ride in the first race to finish third, but fell in the final moto, which put him in 10th overall.

“I was happy to finish off my 250 career on a win. First moto I pulled a good start and controlled the race. The track was gnarly and slick. They over-watered it in the second race and it was a little dangerous. I thought it was a little amateurish. But winning here was very good way to close this chapter and go race with the big boys.”

“It was good start with the new team. I was a little bummed this morning because I didn’t know they changed the schedule. I was driving to the track and got a call: “Dude, practice is going on!” I got here and everyone else was finishing practice. I figured I would have to practice in the first moto. I wasn’t surprised at how fast these guys are. Jeff is three time world champion for a reason: He’s fast, he’s fit and today he was a better man. I really wanted to come here and ride with these guys. I enjoyed it.”