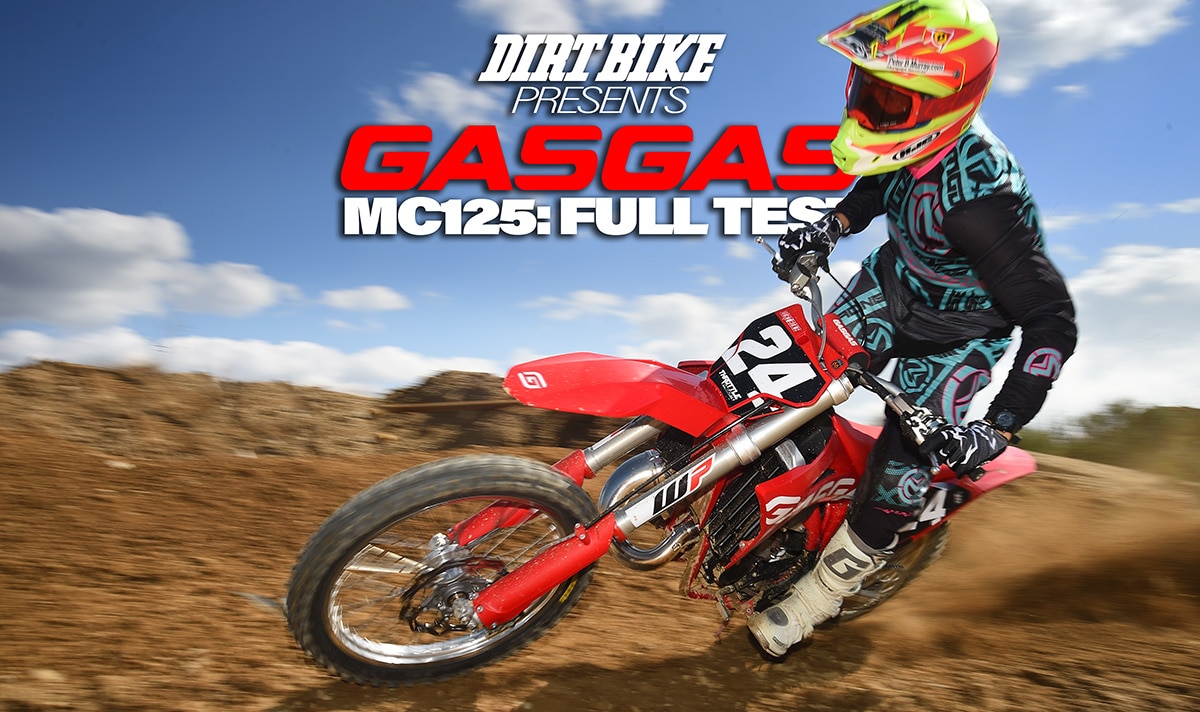 Each generation has its own heroes, icons and inspiring innovations. The next class of young riders to emerge in motocross might well be the GasGas generation. For older riders, GasGas will forever be known as an off-beat enduro brand, but the name has a very different reputation in the minds of the teens and preteens of today. The GasGas MC125 is positioned perfectly to capitalize on that.

The MC125 is a perfect stepping stone from the mini ranks, which already is loaded with GasGas two-strokes. To repeat old news, in 2019, controlling interest in GasGas was acquired by Pierer Mobility, the parent company of KTM. Rather than just have another dealer network to sell its existing products, KTM brass saw this as an opportunity to court the youth market, which is defined by lower pricing, among other things. That’s why the GasGas MC125 has the lowest price of any full-size motorcycle in the combined KTM/Husqvarna/GasGas group. It has an MSRP of $6899. For the price of a Honda CRF450RWE, you could almost buy two MC125s. Additionally, the GasGas still has a carburetor and a kickstarter. Going forward, the KTM and Husky 125s will not.

Going in, you should know that every bike in the GasGas line is based on a preexisting KTM model. In this case, the MC125 uses the 125SX platform but with a price that’s $600 lower. To make that possible, a number of different parts were used:

Unlike some other GasGas models, the MC125 still gets Brembo brakes and a Brembo hydraulic clutch. It also has the same suspension as KTM competition bikes, meaning the WP XACT air fork and a WP 5750 shock. The valving is softer in the GasGas components, although the rear spring rate is the same. The recommended air pressure in the fork is 4 psi lower for the GasGas than for the KTM. All that is in keeping with the notion of attracting younger riders to the GasGas name.

There’s no secret to the MC125’s appeal: it’s very fast and very, very light. On our scale, the bike weighs 195 pounds without fuel. We didn’t need a scale to tell us that the bike is a feather. It’s the bike’s single-greatest defining element. Keep in mind that many of the riders for this bike are transitioning from an 85 that weighs 150 pounds. For them, the step up in weight is manageable, whereas a 250 four-stroke would be intimidating. For more experienced riders, the weight makes them feel invincible. They can hold it open longer, brake later and corner faster. Even when they mess up, it’s unlikely to result in severe consequences.

All that, of course, is true of any modern 125. What makes the GasGas so special is that the power is at the top of the class. Compared to the older Japanese 125s that still populate the field, the GasGas has excellent low-end and far more peak power. Even compared to Yamaha’s brand-new effort in the 125 class, the GasGas is the hands-down winner throughout the power curve. When it lines up against 150s, however, the competition is a little more intense. The 125 gives away almost 5 horsepower at peak compared to a KTM 150SX. Despite that, many riders prefer the 125 simply because it’s easier to ride. The power is less abrupt at low rpm, and it lingers at high rpm a little longer before signing off. Again, this suits young riders moving up, as well as old riders who might not be interested in racing. But, to be clear, a 150 has a huge advantage in competition because of the horsepower difference. To deal with this, GasGas does offer a 150 kit in its accessory division.

WHO RIDES WHAT AND WHERE?

It’s kind of a shame that we didn’t have the GasGas MC125 25 years ago at the height of the two-stroke era. Back then, 125s were difficult to jet, pipey and ate spark plugs for breakfast. The GasGas runs cleanly and is essentially problem-free. Unfortunately, it exists in a time when more 125s are on the start line. We hope that changes. A 125 is unlikely to win against a line of 250Fs, but a world filled with MC125s would be less expensive and more fun. Everyone wins.