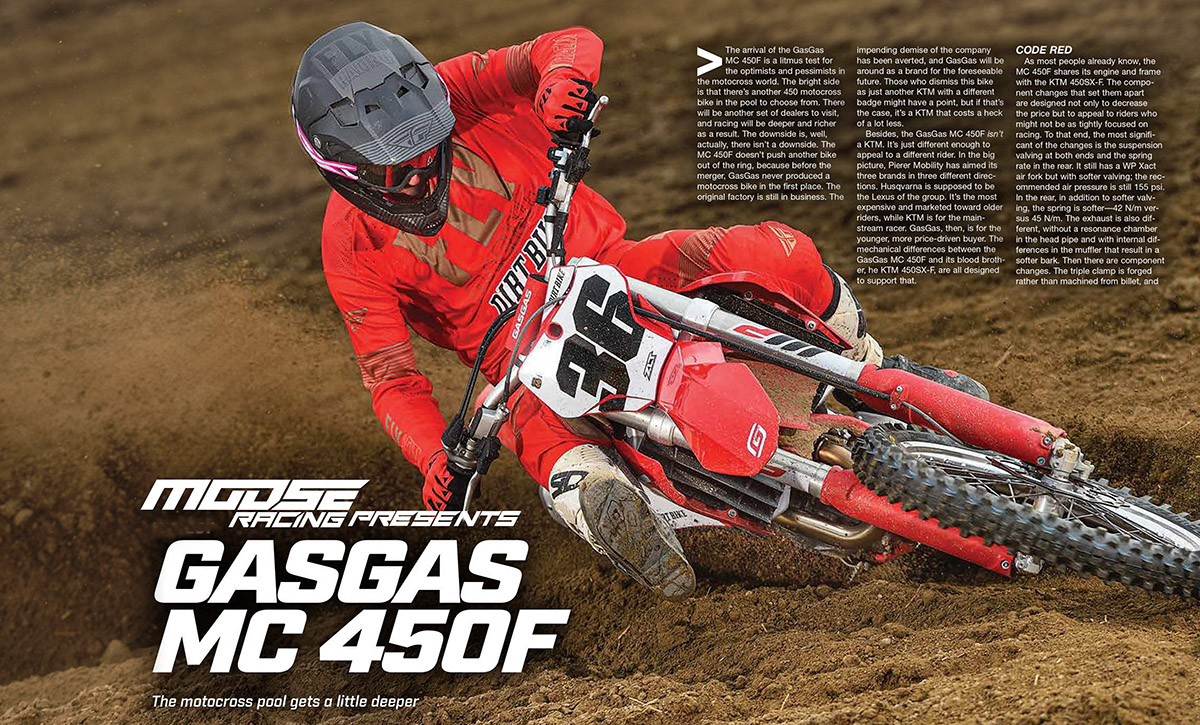 The arrival of the GasGas MC 450F is a litmus test for the optimists and pessimists in the motocross world. The bright side is that there’s another 450 motocross bike in the pool to choose from. There will be another set of dealers to visit, and racing will be deeper and richer as a result. The downside is, well, actually, there isn’t a downside. The MC 450F doesn’t push another bike out of the ring, because before the merger, GasGas never produced a motocross bike in the first place. The original factory is still in business.

The impending demise of the company has been averted, and GasGas will be around as a brand for the foreseeable future. Those who dismiss this bike as just another KTM with a different badge might have a point, but if that’s the case, it’s a KTM that costs a heck of a lot less.

Besides, the GasGas MC 450F isn’t a KTM. It’s just different enough to appeal to a different rider. In the big picture, Pierer Mobility has aimed its three brands in three different directions. Husqvarna is supposed to be the Lexus of the group. It’s the most expensive and marketed toward older riders, while KTM is for the mainstream racer. GasGas, then, is for the younger, more price-driven buyer. The mechanical differences between the GasGas MC 450F and its blood brother, he KTM 450SX-F, are all designed to support that.

CODE RED
As most people already know, the MC 450F shares its engine and frame with the KTM 450SX-F. The component changes that set them apart are designed not only to decrease the price but to appeal to riders who might not be as tightly focused on racing. To that end, the most significant of the changes is the suspension valving at both ends and the spring rate in the rear. It still has a WP Xact air fork but with softer valving; the recommended air pressure is still 155 psi. In the rear, in addition to softer valving, the spring is softer—42 N/m versus 45 N/m. The exhaust is also different, without a resonance chamber in the head pipe and with internal differences in the muffler that result in a softer bark. Then there are component changes. The triple clamp is forged rather than machined from billet, and the swingarm is cast as a one-piece unit without welds. That’s actually the same as the one that comes on the Husqvarna FC450, whereas the KTM swingarm has several pieces that are welded together. The GasGas rims have no brand name, although they are made by Excel, just like KTMs. Likewise, the handlebar is made by Neken but has no branding. Does that mean the quality is different? We don’t really know. The tires are Maxxis rather than Dunlop, too. Of course, the bodywork is all new and very red—a much deeper shade than Honda’s. The brakes and hydraulic components are all Brembo, just like KTM’s. Likewise, the airbox and subframe are just like KTM’s. The most obvious cost-saving measure is the lack of a map switch on the GasGas. The two maps, traction control and launch assist are all embedded in the bike’s ECU, but you will need to pay $170 for the switch to access that stuff.

Just in case you don’t have your 2021 KTM 450SX-F info handy, that bike had very few changes for 2021. The most significant of them were within the WP fork, which now has a more conventional mid-valve design and an elastomer bottoming system. We considered those a big upgrade, and the GasGas uses all the same stuff. The single-overhead-cam motor is essentially unchanged from last year’s 450SX-F. It still has a hydraulically actuated clutch that uses a diaphragm spring rather than coil springs. All those parts are directly interchangeable between KTM, Husqvarna and GasGas.

JUMPING-JACK GASGAS
In a universe where the KTM and Husqvarna 450s didn’t exist, the GasGas would blow our socks off in just about every way. First of all, we would have never ridden a 450 this light. On our scale, the MC 450F weighs 223 pounds without fuel. That’s 10 pounds lighter than the lightest Japanese 450. That makes everything better. The bike is super easy to ride by 450 standards. In turns, it’s one of the most agreeable bikes made. You can brake hard, change lines and get away with most of the bad behavior usually reserved for 250 riders. Only part of the credit goes to the weight. The GasGas is narrow, comfortable and has flawless handling manners. Most of all, it has one of the smoothest power deliveries in the class. It’s a truly powerful motorcycle, but all that output is dished out in a gentle manner. Some riders might actually want a sharper hit just for the thrill factor. When you start revving the bike, though, it’s clear how fast it is. It screams on top. If you don’t want to shift, you usually don’t have to. The bike keeps revving and revving.

With KTMs and Husqvarnas in the picture, the GasGas’ personality isn’t distinctive, but it still has traits that set it apart. Those bikes both have an extra vented airbox cover in the crate when it is delivered to the dealer. It offers a little more immediate throttle response, particularly at the bottom of the powerband. The GasGas doesn’t have the extra cover, so unless you make your own vents, you have a power delivery that’s akin to the KTM’s in its milder persona. The differences in the GasGas exhaust system further contribute to the smooth power output, and the lack of a map switch means you’re stuck with the mildest of the two EFI maps. When you add it all up, does the GasGas run like a bottled-up KTM? No. It still has 95 percent of the same character.

There are much bigger differences in the way the bike handles. It’s softer and cushier, just as the marketing guys intended. It’s well-suited to some tracks, but not so much to others. It’s all about the average speed. On more wide-open tracks where you find yourself in taller gears going fast, it’s hard to get away with soft suspension. The G-forces alone use up half of the suspension travel. When you find yourself in those conditions, you need to up the compression damping dramatically in order to level things out and keep the bike stable. On tighter, slower tracks, however, the GasGas is perfectly at home. The softer fork and shock simply make it more comfortable and compliant. 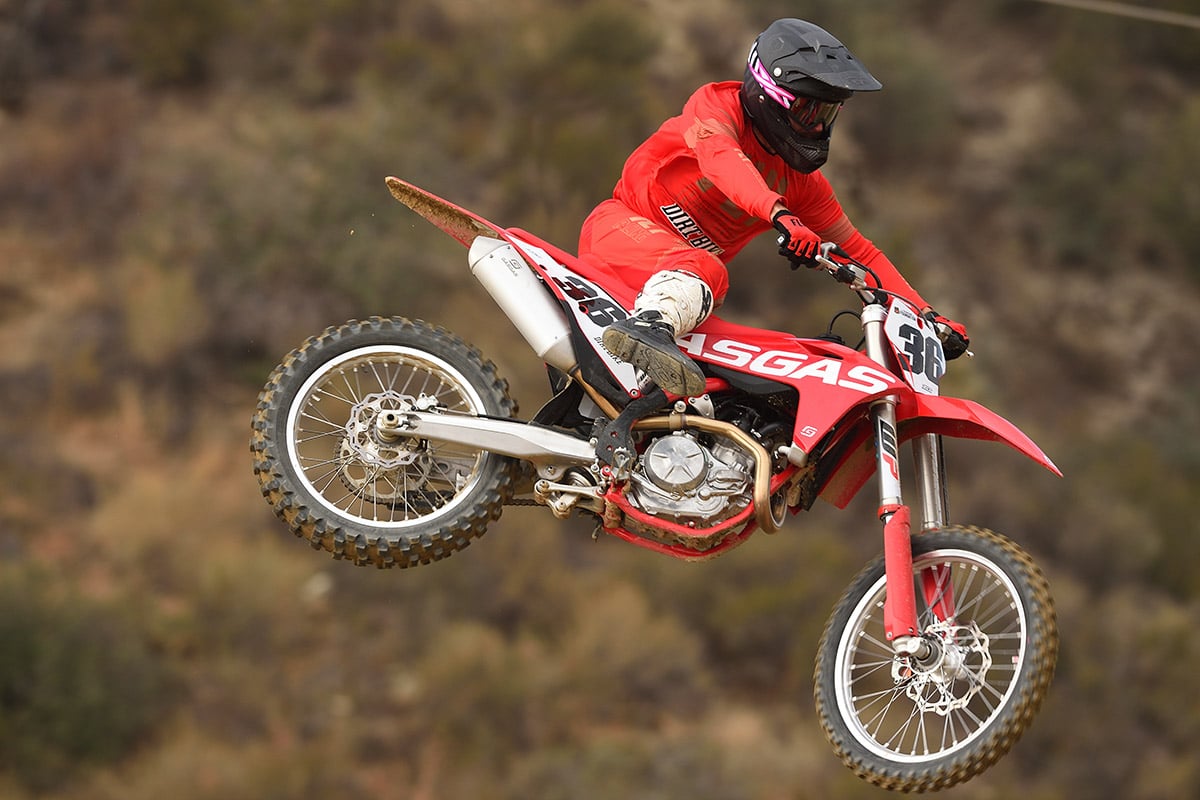 The triple clamp and swingarm contribute to the same character. It takes experience testing triple clamps to feel the difference between the GasGas’ forged clamps and the KTM’s machined one—most riders would attribute it to suspension differences. Again, it’s all about speed. The forged clamps have a flexier feel at high speeds under big G-loads. You can also feel a difference when you slap-land. At lower speeds, the difference is much more subtle. As far as the swingarm is concerned, the difference is harder to define. We have heard from factory test riders that the GasGas cast swingarm is flexier, but without the means to do back-to-back testing for ourselves, it’s hard to come up with definitive results. Even though the KTM and Husky 450s have the same difference, it’s covered up by even larger differences in the subframe, which is much flexier on the Husky. 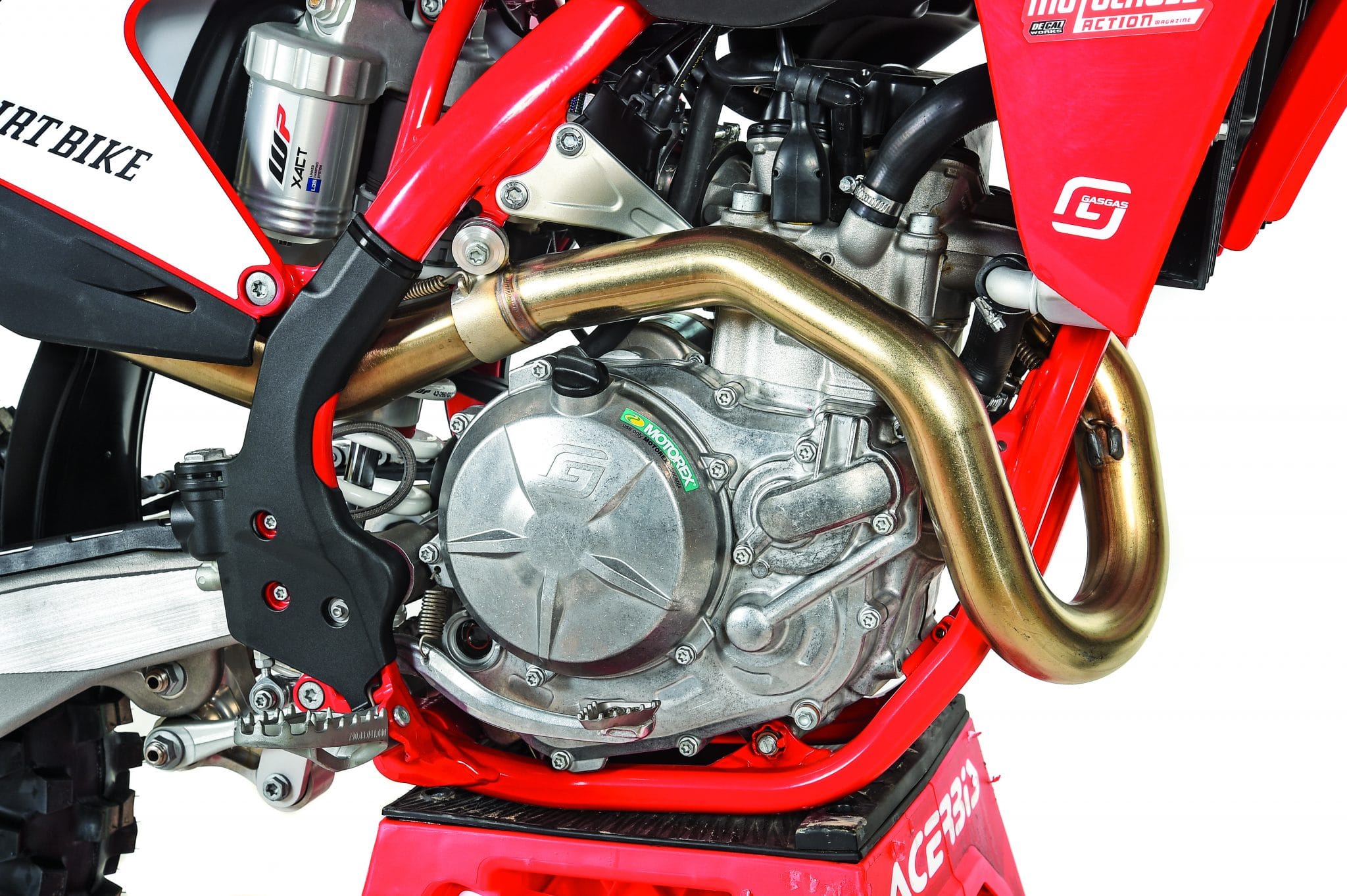 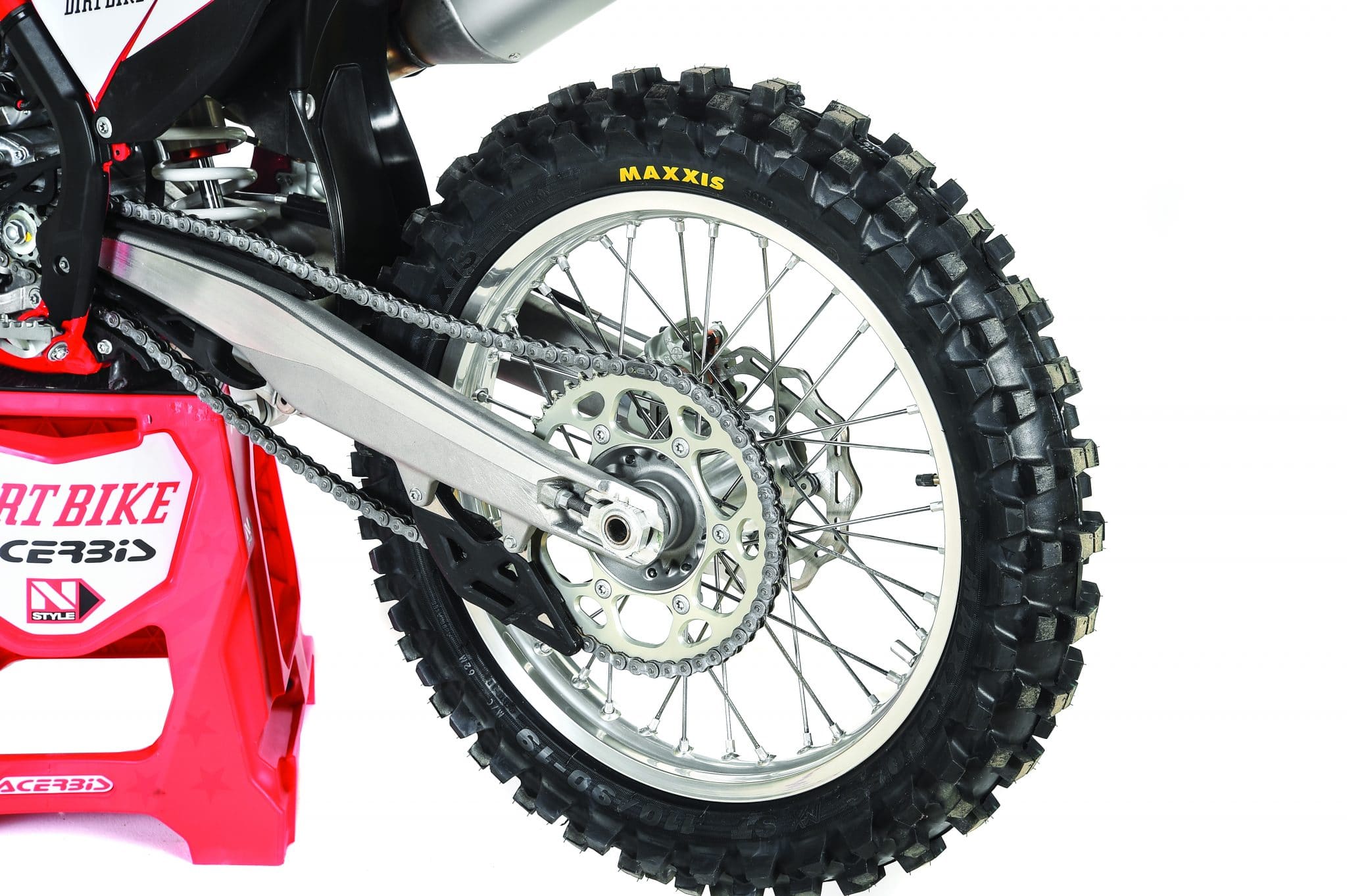 PARTS
On this particular model, the brakes and clutch hydraulics are identical to KTM’s—they’re excellent. Of the parts that are different, we haven’t yet seen a difference in quality. The Maxxis tires don’t have quite as much grip on hardpack and have slightly more roll in turns, but they also wear longer and probably have a cushier ride—again, hard to be definitive without identical suspension setups. When you add it all up, does the $800 difference in price make the GasGas a better buy than the KTM or Husky? It all depends on who you are, what you value and how deep your bank account is. We can say for certain that the motocross world is a bigger, better place now that the MC 450F is a part of it. And it’s only the beginning.

2021 SUPERCROSS STANDINGS AFTER ROUND 7