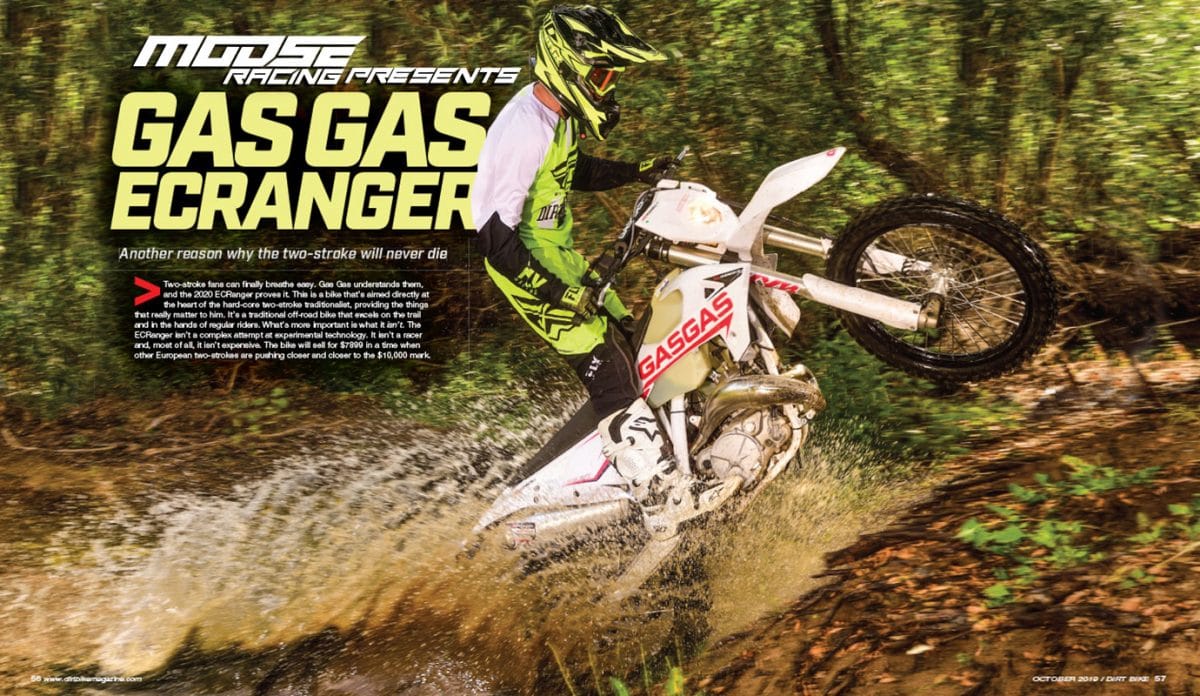 The GasGas ECRanger is a bike that’s aimed directly at the heart of the hard-core two-stroke traditionalist, providing the things that really matter to him. It’s a traditional off-road bike that excels on the trail and in the hands of regular riders. What’s more important is what it isn’t. The ECRanger isn’t a complex attempt at experimental technology. It isn’t a racer and, most of all, it isn’t expensive. The bike will sell for $7899 in a time when other European two-strokes are pushing closer and closer to the $10,000 mark. 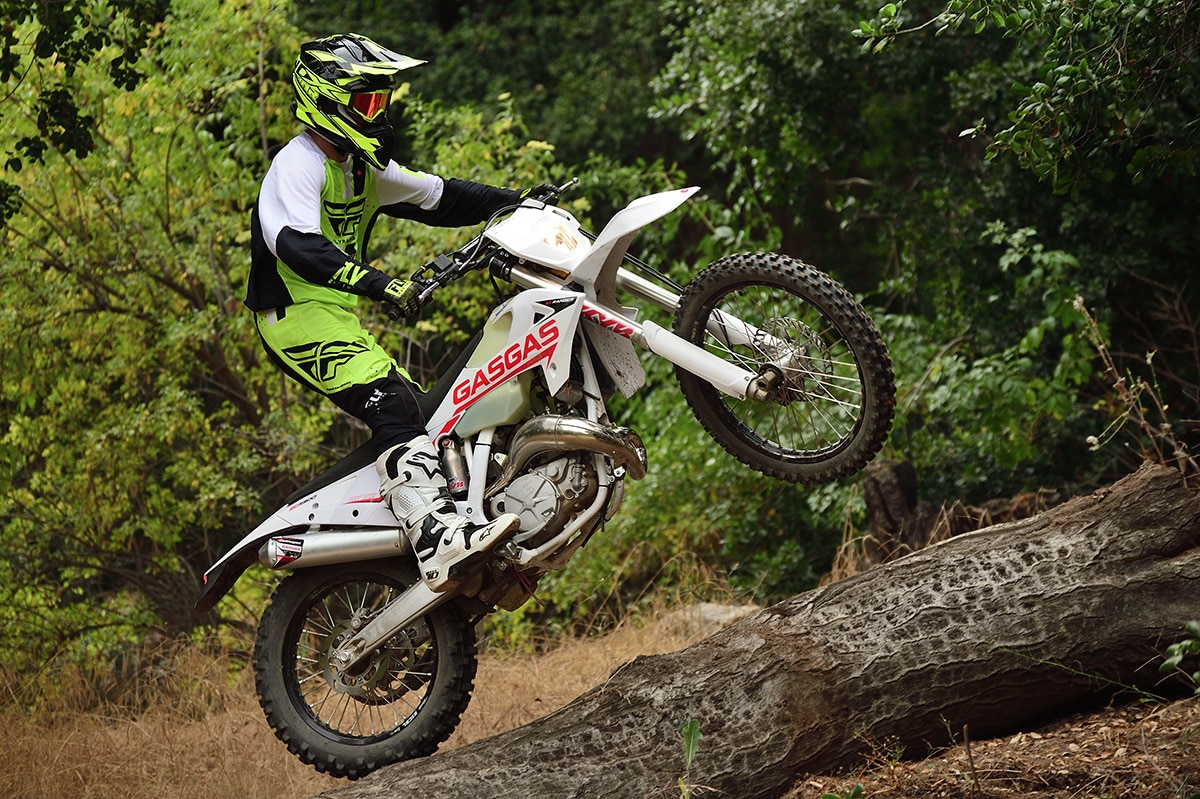 GAS GAS A GOGO
One of the factors that makes the upcoming year so promising is the new ECRanger. The people at GasGas came to the conclusion that their base was the traditional two-stroke fan, the guys who were keeping their aging Japanese bikes alive with duct tape and JB Weld. Those guys aren’t interested in fuel injection. They probably aren’t interested in competition, and they definitely aren’t interested in spending a lot of money. The ECRanger was designed for them. It’s based on the standard EC300 off-road bike, but with three fundamental mission changes. It would be easier to ride and would have a lower seat height and a lower price.

THE FORMULA
In case you don’t know what a standard GasGas EC300 is in the first place, here’s the short form. The motor is an old-school power-valve two-stroke with a Keihin carb and that familiar 72x72mm bore and stroke (at least in the 300cc version that we have here). It has an electric starter that was added a few generations after its initial design, with a starter motor mounted on the left mag cover. It has a case reed and a six-speed gearbox. The chassis got a complete makeover after the Torrot merger, and, to be frank, it reveals a very heavy KTM influence. The frame is steel with a center backbone, and even the layout of the various members looks kind of KTM-ish. That’s not a bad thing.

Now, for the change in direction. Whereas the standard EC300 uses a closed-cartridge KYB 48mm fork, the ECRanger has an open-chamber 46mm fork, but it is still made by KYB. Travel in front is reduced from 300mm to 270mm in order to bring down the seat height. Same goes for the rear suspension. Instead of Brembo brakes, Spanish-made J. Juan brakes are used at both ends, and the pipe and silencer, which are made by FMF on the standard machine, are by a company called Technigas. In order to alter the power delivery, the ECRanger’s pipe is much smaller in volume; it actually looks more like something off a 125 or a mini. There are also differences in the head, the cylinder and the power valve. The really big difference between the two is the price. The 2020 ECRanger sells for $1400 less than the standard EC300.

STRENGTHS AND WEAKNESSES
When you ride the ECRanger, it’s clear that this is a different kind of motorcycle by design. Right away, you’re hit with a different kind of feel and even a different kind of sound. All the power is down low at the first crack of the throttle. Some riders have described it as having a trials bike feel, but we don’t think that’s accurate—it isn’t that slow revving. It’s just a little milder and smoother than a standard EC300 down low. As you rev it up, the difference becomes more and more apparent. There’s no two-stroke hit. The snap that usually comes around 7000 rpm simply isn’t there. Instead, the bike continues to build power at about the same rate of increase without any surprises. In peak power, of course, the 300 is no big deal. It’s probably no faster than a 125 two-stroke. It was never meant to win any drag races.

Where the ECRanger can go toe to toe with any motorcycle made is on tight, slow, technical trails. Anything that’s truly difficult caters to the bike’s strong points for beginners and experts. The power delivery is perfect in rocks or mud or any place where precise throttle control is necessary. The most surprising aspect of the bike is how well the suspension works. It’s soft, but it doesn’t collapse with hard braking or in G-outs. On slow-speed trails you don’t notice the reduction in travel, but you do notice the lower seat height. Even the best riders have to dab here and there. On the flip side, you might notice that the bike has a little less ground clearance than a standard EC, especially in those technical trails. It isn’t a big factor when it comes to dragging the frame rails or that tiny pipe; it’s very well tucked in. But, you occasionally find your feet being wiped off the pegs in ruts.

There are also some areas where it’s clear that the low price comes into play. The brakes aren’t especially strong, and there are no frills, such as skid plates, handguards or a backup kickstarter. It seems there are a lot of $10,000 bikes that lack those things as well. We were surprised that Gas Gas kept the hydraulic clutch, the headlight, the odometer and the frame guards. There are a lot of premium motorcycles that don’t have those. You also have to do some setup to make the bike work in your area. In the heat of a Southern California summer, the stock jetting was far too rich. We never fouled a plug, but the motor always seemed like it needed to clear its throat. 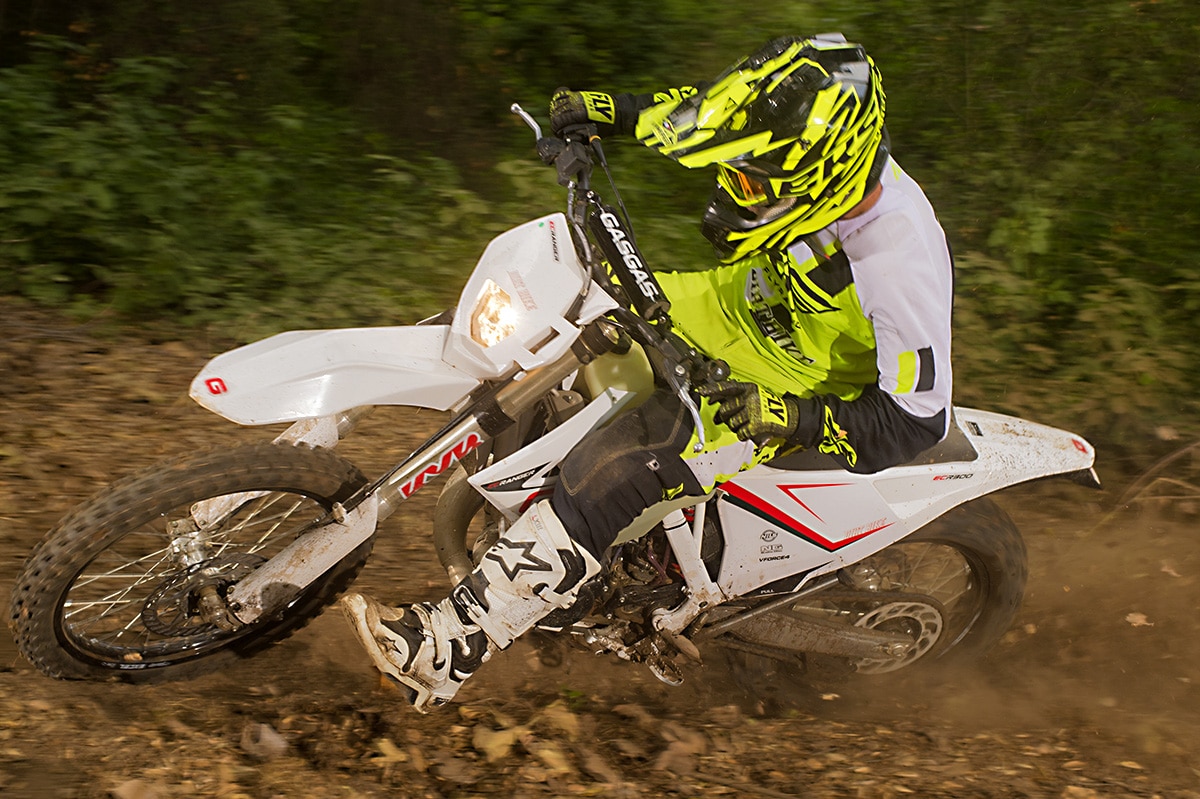 A PLACE IN THE SUN
The ECRanger was designed to cater to beginners and dedicated two-stroke lovers, but any off-road rider will love it. It’s a true trail bike and works better on slow-speed singletrack than any redirected racer. Gas Gas clearly saw a gap in the market and reacted with the right product. It might not be the flashy, high-tech type of product that we expected to open the third decade of the 21st century, but it is, however, just what we always loved riding.