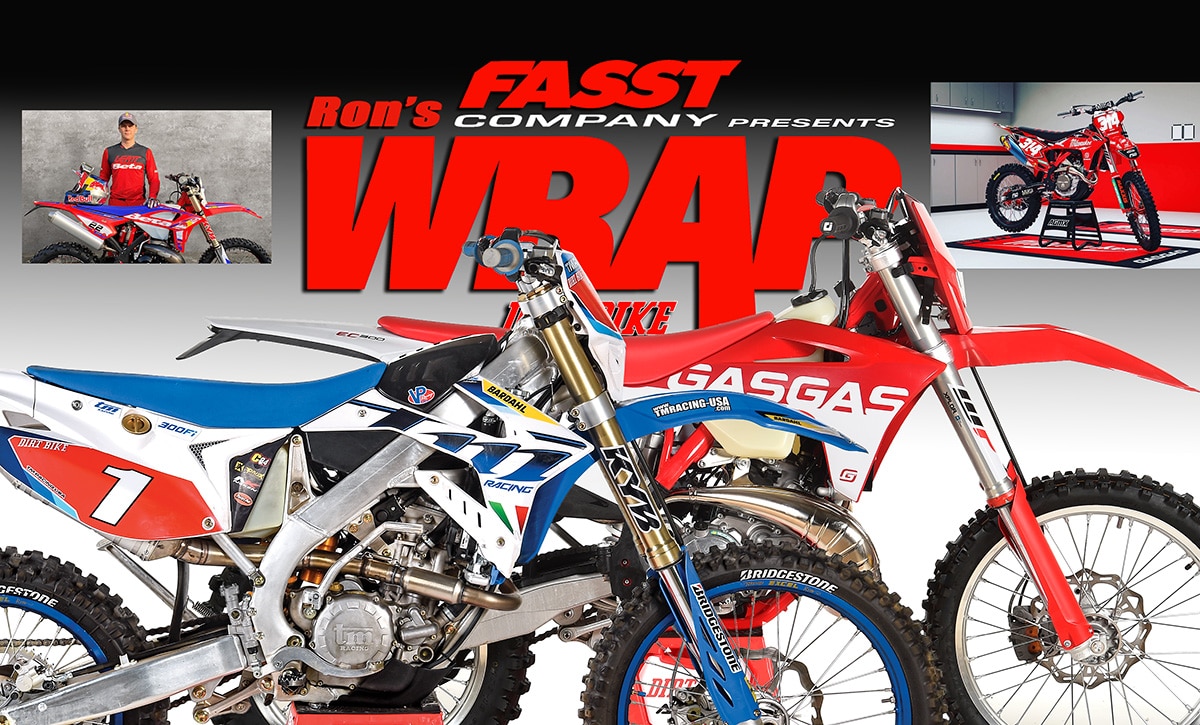 We have an odd-couple of 300cc off-road bikes that we’re testing now. One is the GasGas EC300 two-stroke and the other is the TM 300 four-stroke. Both of these were obscure European companies a few years ago, but now they are entering the mainstream. GasGas, of course, is now a part of Pierer Mobility and is a sister brand to KTM, so the EC300 is very similar to the KTM 300XCW. The TM is still somewhat scarce in the U.S. This particular model is the twin-pipe four-stroke, based on the 250 that was developed on the world motocross circuit over the past three years.  The 250 is also the platform for Andrea Verona’s 2020 E1 championship-winning bike, which is why our test bike has a big number one. We didn’t deliberately collect these two bikes for a comparison, but they still made for an interesting couple. 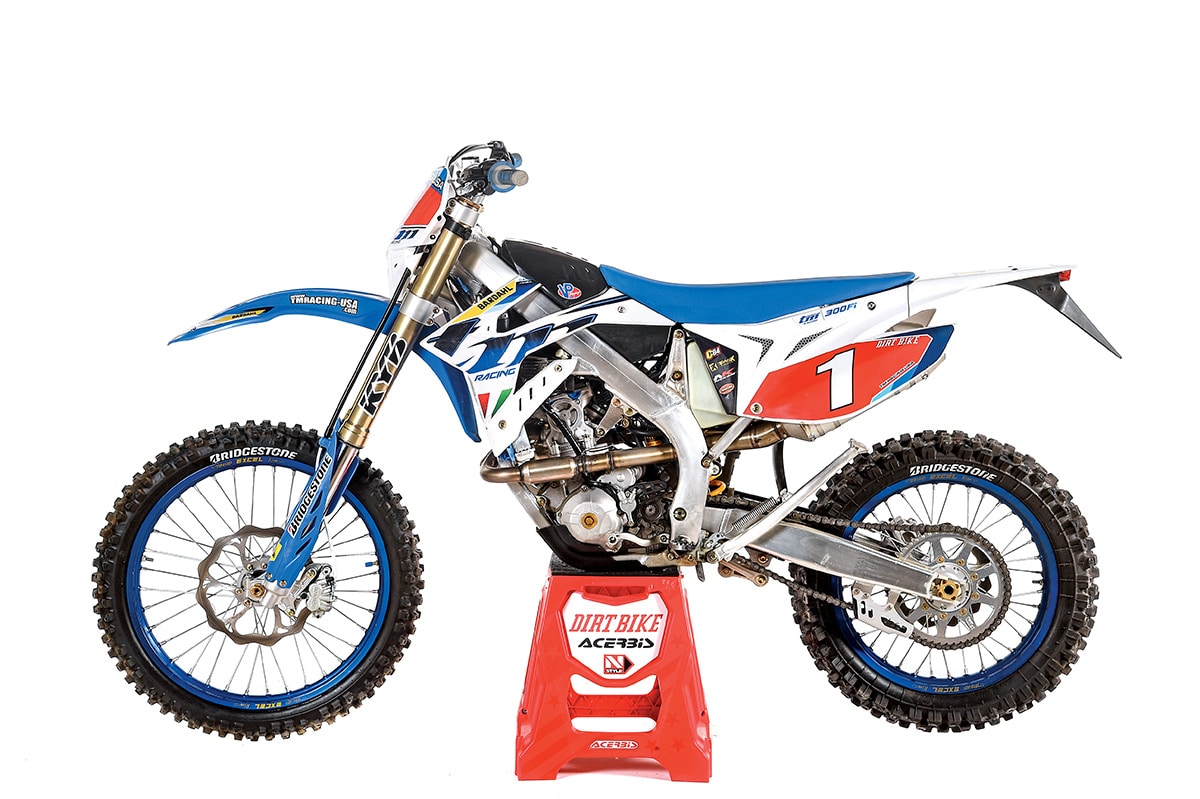 The TM motor is a technological masterpiece. The  valve train is driven by a combination of a cam chain and gears, which drives two cams, four finger followers and four titanium valves. The fuel tank is placed under the seat, while the throttle body and air filter sit were the gas tank would traditionally be. The fuel filler is on the right side under the seat. It uses twin pipes, which is probably to limit noise. The TM is a remarkably quiet bike. It’s also remarkably expensive, at $11,395. Without fuel, the TM weighs 238 pounds on our digital scale. 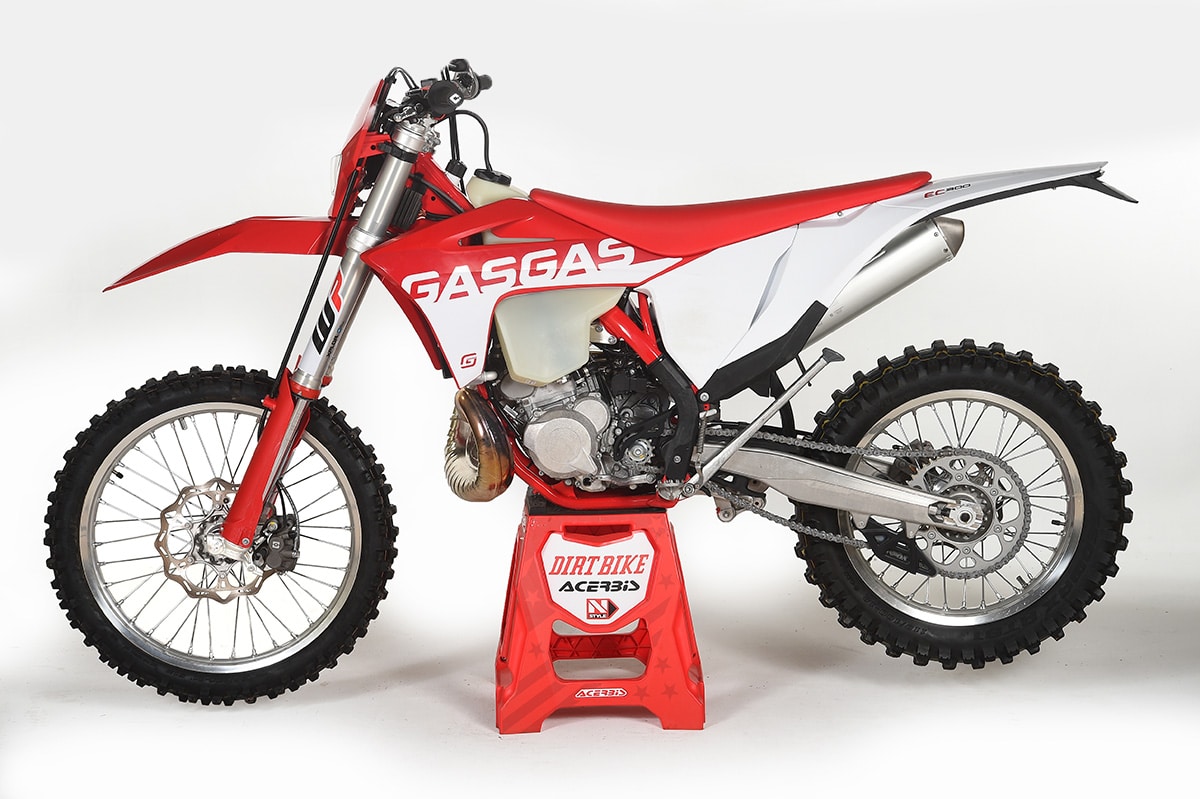 As you can read about here, GasGas is KTM’s response to those who complain about their prices. The EC 300 sells for $9599, whereas the 300XC-W is $10,199. In order so do that, the EC uses some different parts. The brakes and hydraulic clutch are by Brake Tech. The bars and rims are unbranded versions of the Neken and Excel items that come on KTMs. Unlike the motocross GasGas models, the EC still uses Dunlop tires. It also uses TPI fuel injection and oil injection, just like the KTM. It comes with a WP Xplor fork, but in the rear it uses linkage suspension, not PDS. Those two items make it 12 pounds heavier than an XC-W: 235 pounds without fuel. 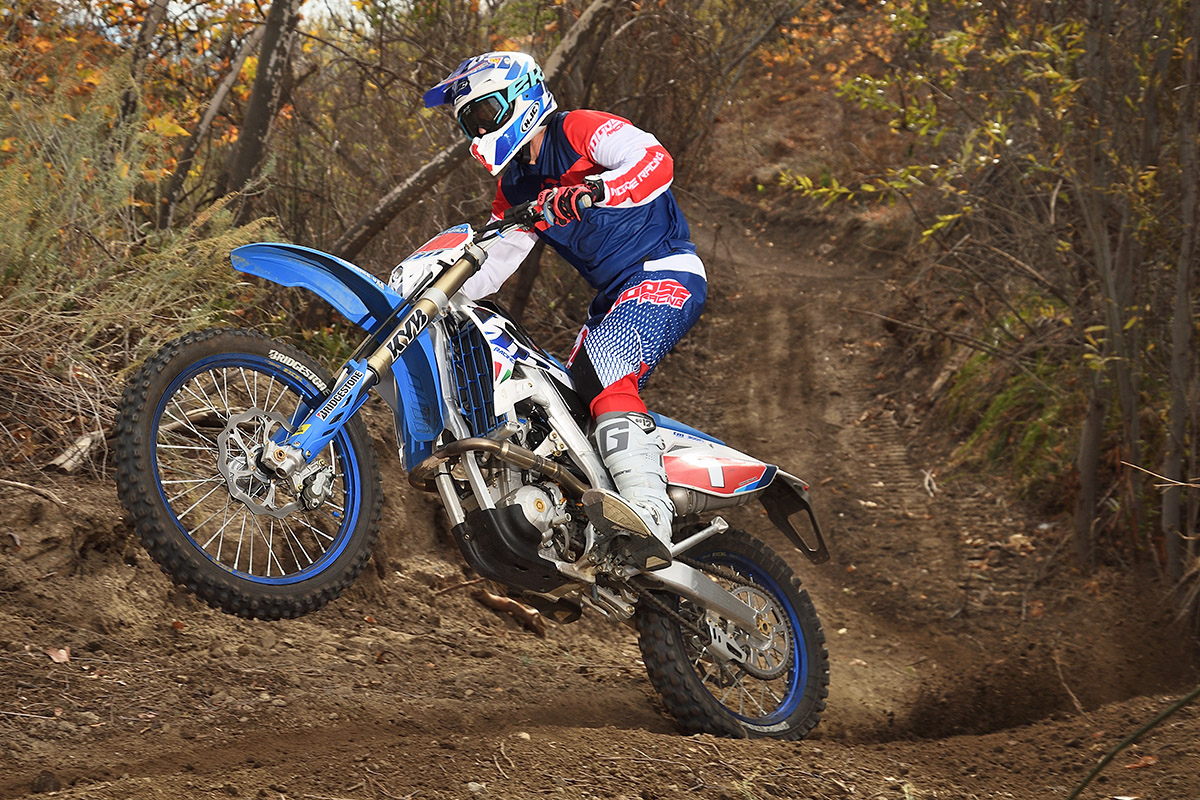 Both of these bikes are very effective off-road bikes, but they couldn’t feel any more different. The GasGas is super responsive and very fast. The TM is progressive and smooth. When you’re in trail-ride mode, you  lope along and the TM and enjoy the scenery. When you want to go fast, you have to rev it like a madman. The GasGas doesn’t like to be revved that much. The instant throttle response means you have to pay attention to what you’re doing. In really difficult terrain, you can let the two-stroke motor drop to absurdly low rpm without fear of staling. On the four-stroke, you always have to keep your guard up. Most of the time, you actually ride with the clutch in.

They handle completely different despite being so close in weight. The TM is well-planted  and stable, whereas the GasGas is very active and somewhat aggressive. You would think that the GasGas is much lighter, but 3 pounds is hardly a significant difference. In suspension, the two bikes are also complete opposites. The KYB fork and Ohlins shock on the TM are set up for fast riding and racing. The GasGas, on the other hand, is in its element at very low speeds. It absorb rocks and trail trash much more effectively than the TM’s suspension, but dives and unloads at higher speeds.

We don’t think anyone is seriously struggling with a decision between these two exact bikes, but they are two bikes that will be tested in the same print edition of Dirt Bike, so they have ended up on many of the same trail rides. Look for them in the April issue.

While we’re talking GasGas, it’s worth noting that the company has a full-factory Dakar team headed by Laia Sanz. She is currently in 25th place with half of the rally in the books. For Laia recent months have been especially challenging due to contracting Lyme Disease during the summer, making her final Dakar preparations more complicated than normal. It’s her 11th appearance at the rally and we’re all pulling for her. 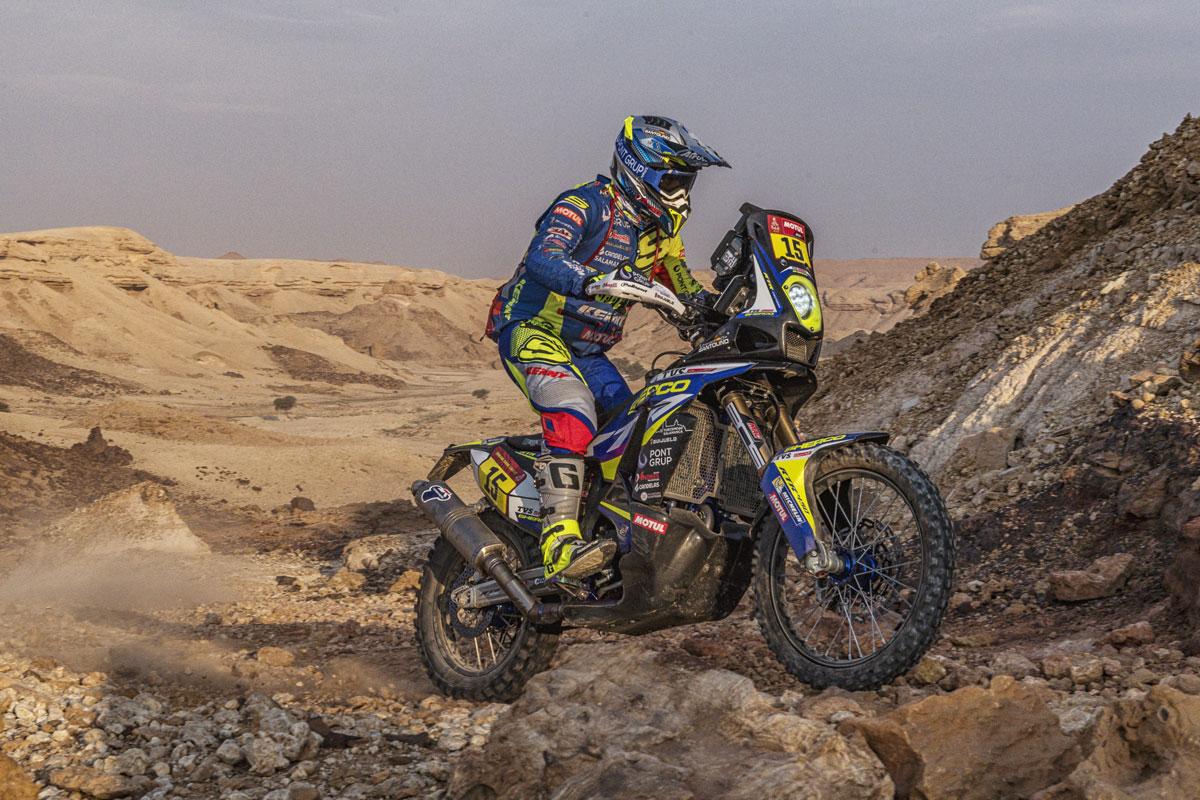 Sherco is another factory team competing in Dakar.  The first week of this 2021 Dakar has seen the several of their riders in the top 10. Lorenzo Santolino took 5th place in the first stage, then a 4th place in the 6th while Rui Goncalves in his first participation in the Dakar inaugurated a top 10 with a 9th place in the 3rd stage.

National Enduro Champion Grant Baylor will be on a GasGas support team in 2021. Kyler Lenz Motorsports is the team and will carry very cool Milwaukee graphics next year. In the GNCC world, he will have to go head to head with the GasGas in-house rider Ricky Russell. 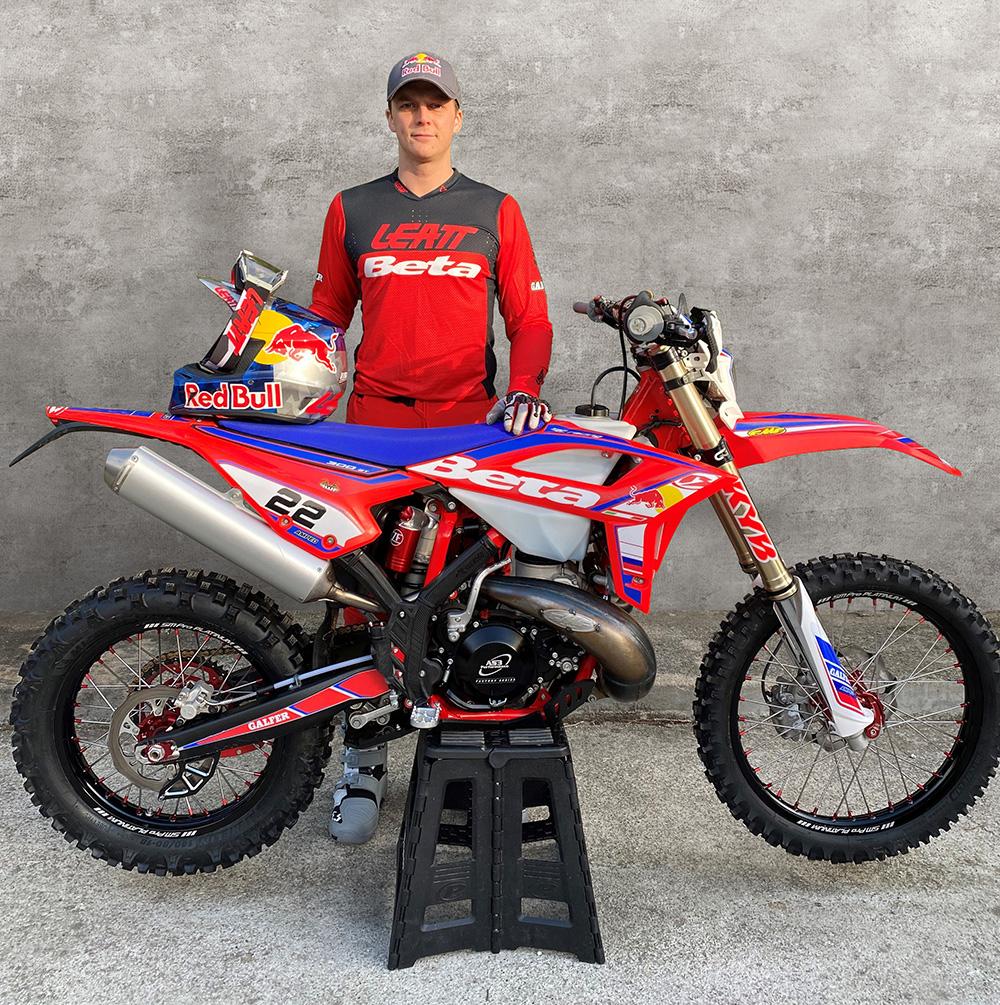 Jonny Walker signed with Beta Racing to race Extreme Enduro in 2021. He will primarily race in the new FIM hard Enduro World Championship and the SuperEnduro World Championship. These series are the most demanding events of the international offroad circuit. He will also race at select Extreme Enduro events in the United States. Walker will be riding a 2021 Beta 300 RR this year.