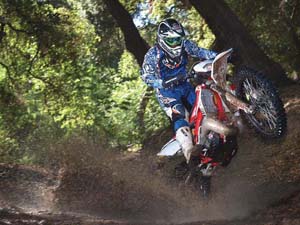 The two-stroke revolution isn’t really a revolution at all. Revolutions imply new ways of thinking, new ideas and the discarding of old institutions. The two-stroke movement doesn’t really have any of those elements; it’s more of a reaction to the four-stroke revolution, and it is based on some very old-school ideas that revolve around bikes like the Gas Gas XC300.
To be fair, this isn’t an old bike. The Gas Gas is one of the newest and most ground-breaking motorcycles of 2012. It has an entirely new chassis that defies current trends and represents the most decisive direction that this company has taken in 20 years. But the underlying philosophy isn’t anything new. It’s a rechristening of some established and proven formulas. So right up front, you should know that there’s nothing risky about this strikingly new-looking machine from Europe. It was proven a long time ago.

THE HUSKY TWIN THAT NEVER WAS