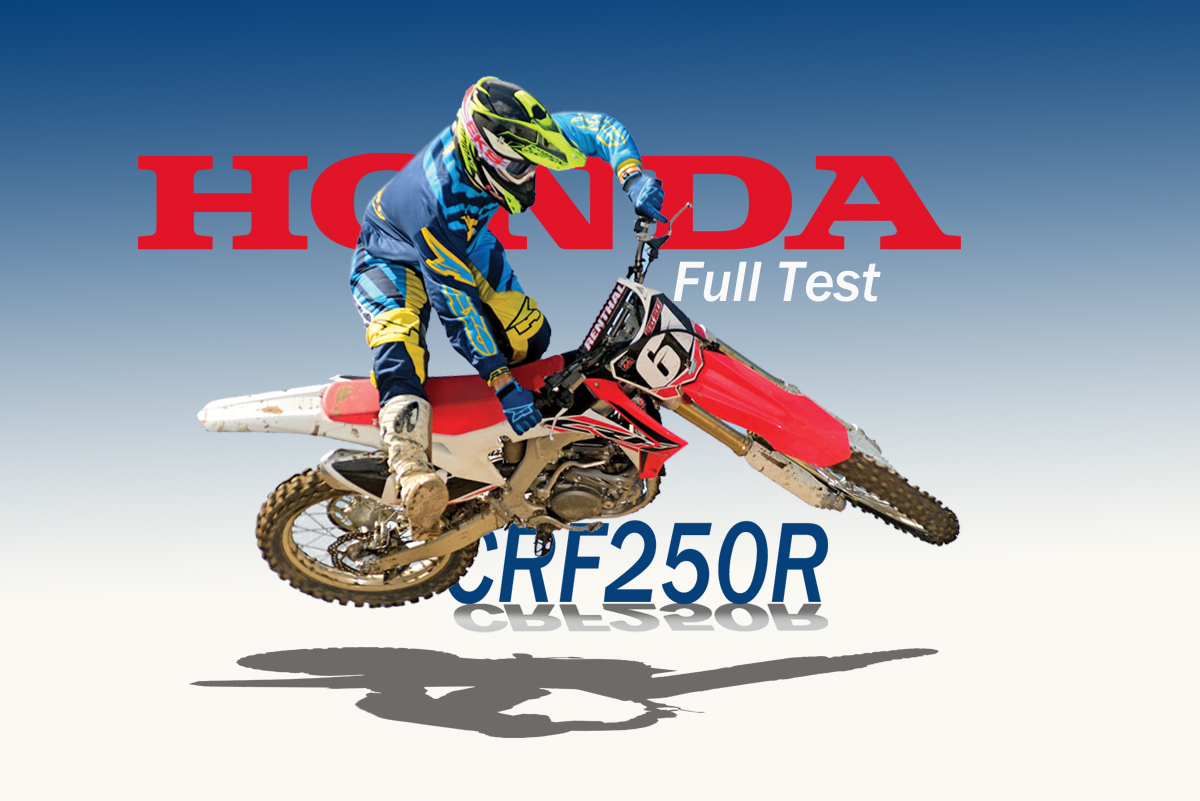 The 250F class is out of control. It seems like just a few years ago this class was a calm, smart place to be. The motorcycles were fairly equal in strength, and if anyone had an upper hand, it was by the smallest measure. Then, things started heating up. Kawasaki, KTM and Yamaha took turns going a little crazy, and now the 250 four-stroke world is a place where brawn rules and power is the only law.
Honda tried to be above it all. The CRF250R played the role as the smart guy in a room full of Hulks. The 2015 Honda was light, it had the most sophisticated suspension and many riders said it was the best-handling bike in the class. It was also the slowest. The Hulks took turns smashing it. Now, Honda has brushed itself off and returned with a number of significant motor changes. The idea was to increase the brawn without decreasing the brain. 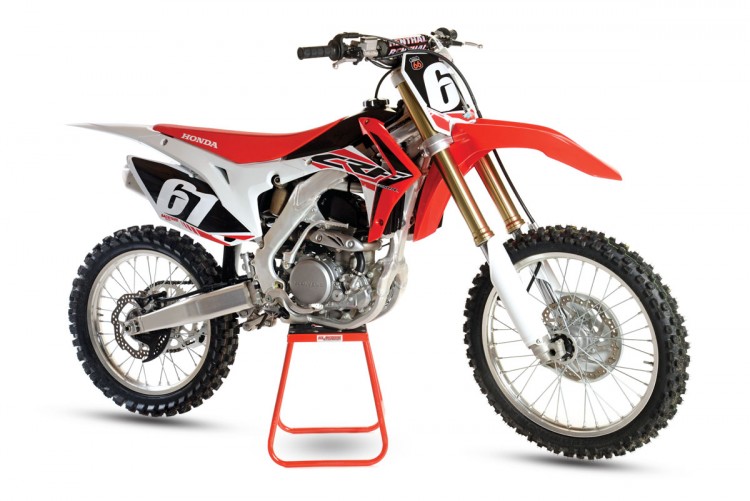 THE BEAST INSIDE
This isn’t a major change year for Honda. The list of things that are the same on the CRF250R is much longer than the list of things that aren’t. You have to know your Hondas pretty well to tell the difference between a new motor and the very first one that appeared back in 2004. The Unicam head design still makes it very different from anything else in the class. Back in 2004 Honda was making a point that you don’t need two cams and all the accompanying complications to make power, and, in fact, there were a number of years that the Honda was the horsepower king.
Other things that set the Honda apart are the twin mufflers and the HPSD steering damper. In 2015 Honda gave its 250 the most sophisticated fork in the business. It got a proprietary version of the Showa triple Air. This is an air fork with the springing and damping functions separated in the two different legs, and with three different chambers for air. What sets this fork apart from the other KYB pneumatic forks offered by Kawasaki and Suzuki is the fact that the air chambers are in the left side and all the damping functions are in the right rather than vice versa. More obvious, the balance chamber is internal rather than in a little reservoir that hangs off the bottom.
The main air chamber holds 174 pounds and works in opposition to the balance chamber, which holds 163 pounds. The third chamber is designed to hold atmospheric pressure, and last year didn’t even have a valve for adjustment. For 2016 Showa added a valve on that chamber because, as it turned out, some riders liked the subtle change with a few pounds of pressure in there. The fork is also 5mm longer and has an inner seal that is said to dramatically decrease friction.
It was the motor that got the bulk of the attention for the new year, though. The piston and rod are new; the compression ratio is higher; the titanium exhaust valves are new; and the cam, lifters, exhaust and airbox have all be altered in search for more power. There were also changes in the shift drum, the left radiator (it’s larger) and the footpeg bracket is braced.
Last year Honda had the three power modes that are accessible through a handlebar-mount switch. That is unchanged, although the three maps are somewhat different. There’s still an aggressive map, a mild map and a standard one.

WHAT’S GOOD, WHAT’S NOT
Riding a Honda CRF250R is still a blast. The bike feels lighter and smaller than anything in the class. A few years ago Honda made it a point to prove that a fuel-injected four-stroke doesn’t have to be heavy. Now, there are other bikes in the class that are as light as the CRF250R—the KTM, Yamaha and Honda all weigh the same at 222 pounds without fuel. But the Honda feels lighter than any of them. It’s easy to throw around and manhandle in ways that make you feel like you’re superhuman. In the past, the Honda has endured criticism for having some mild instability issues. Those have faded away with time, and the longer fork gives you the opportunity to make handling changes that weren’t possible before. The bike comes with the fork tubes pushed up into the triple clamps 5mm, so there’s no net change in ride height. But, you can push the tube down until the top is flush with the clamps if needed. Most riders don’t want to sacrifice anything in cornering, and turn to the adjuster in the HPSD system for more stability.
The fork itself is excellent in performance. It’s plush and has excellent resistance to bottoming. The concept of air forks still is a little hard to get used to because it’s just one more thing you have to check before each ride. The complication of having three different air chambers to adjust, as well as compression and rebound adjustment, is a little overwhelming for most riders, and it’s easy to get lost in all the adjustment. Our advice is to set the pressure to the factory specs until you’ve tried everything else. Change the compression damping just like you would with a conventional fork. If you increase the pressure in the main chamber, change the rebound damping in the same direction and vice versa. The closer you stay to the stock settings, the better as far as we’ve found.
For most riders, the far bigger issue with the Honda is the motor. Were the changes enough to bring it back into the thick of the battle? The Honda’s power is exceptional way down low. The increase in compression ratio made it pull from right above idle, and the fuel mixture is absolutely flawless down there. There are never any hiccups or stutters that could result in a cough-and-die scenario. That makes the bike super easy to ride for novices and beginners. More experienced riders, however, might never experience that bottom-end power because it’s too low in the revs. By the time the Honda gets into the main work zone, it’s already falling behind compared to almost all the other 250 motocross bikes. And on top, it doesn’t rev nearly as high as a KTM or Yamaha. As far as peak power goes, it’s probably five horsepower down.
Changing maps can make things better. Of the three maps that are embedded in the stock ignition, most riders will like the aggressive one the best. And, you can make more progress with Honda’s laptop-based programming software. 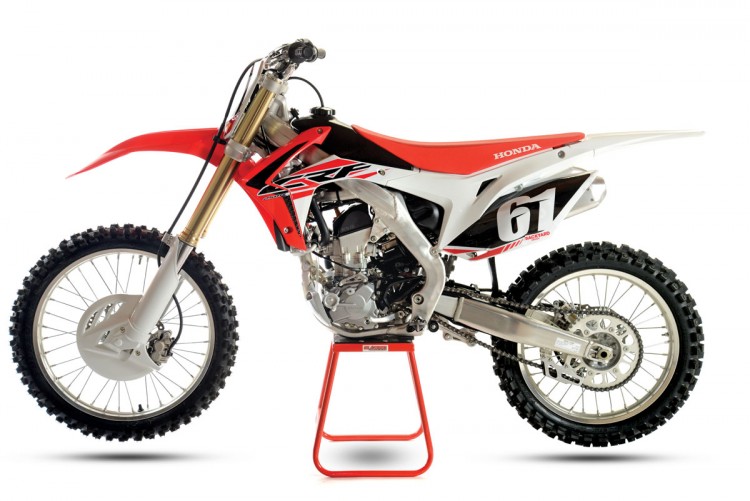 THE WORLD GOES ON
Honda still scores well on the fit-and-finish scorecard. The clutch has a super-light pull, and the shifting is perfect. The bike is quiet, and it starts easily. On the flip side, it still comes with a 1990s vintage 7/8th handlebar, and the number plates are so curved it’s almost impossible to install backgrounds without big wrinkles.
At the end of the day, the Honda still occupies roughly the same place in the market as last year. It’s a great entry-level race bike and the best 250 motocrosser for trail riding. The increase in low-end power, the flawless mapping and even the adjustability of the air fork make it better than ever when it comes to going off-road. But for high-level motocross, it’s hard to get past its handicap in peak power. Good tuners can and do find more power in the Honda motor, but it’s up to you to make it happen.