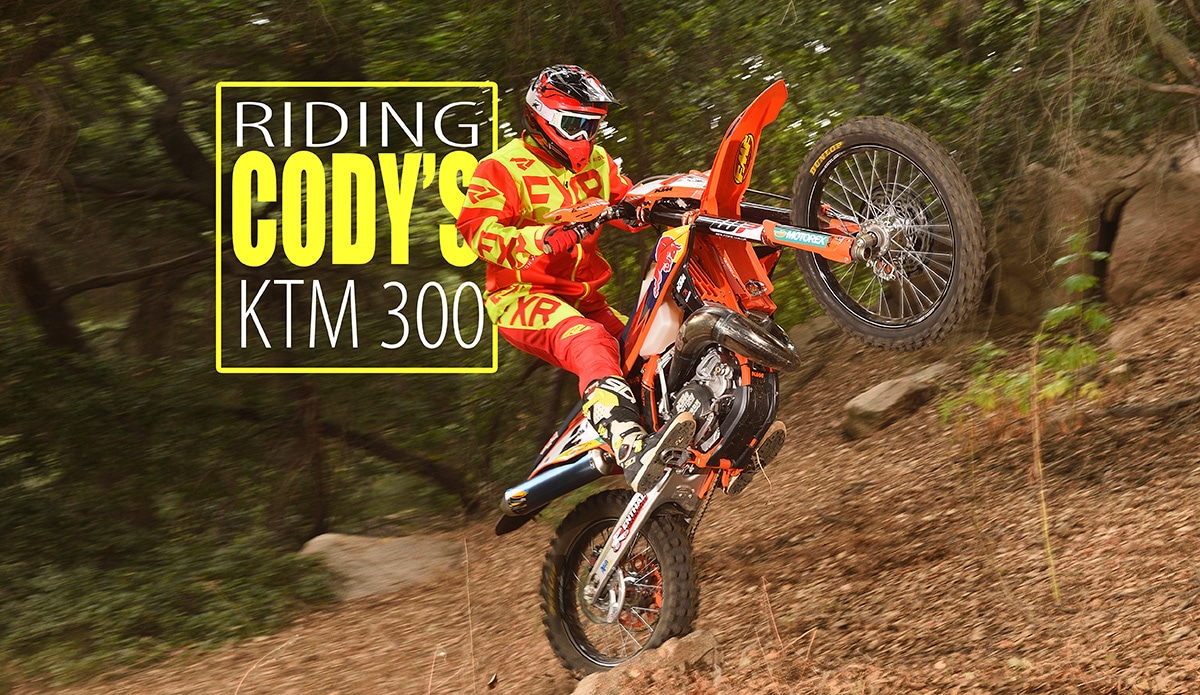 In the last five years Cody Webb has emerged as one of the best Extreme Enduro and EnduroCross riders in the world. He has won multiple one-off outdoor events in the U.S. and continues to be the top American at the same types of events worldwide. We were gutted to hear that Cody suffered a knee injury that would require surgery right before Erzberg, so we decided to help him out and ride his factory KTM 300 TPI race bike while he is going through rehab.

When we think of factory bikes, the first word that comes to mind is “unobtanium.” Unobtanium is defined as “a highly desirable material that is hypothetical, scientifically impossible, extremely rare, costly or fictional, or has some of these properties in combination.” Although there are parts of Cody’s KTM 300 TPI machine that would fit this Dictionary.com definition, the amount of unobtanium is very limited. Surprisingly, most of the items on the bike can be purchased at your local KTM dealer. Internally, the engine features very few hop-up items, and even the complete Hinson clutch that it uses is similar to the stock footprint but is made out of billet aluminum and is hard-anodized to Hinson’s specifications, providing improved durability.

Casting marks are removed from the OEM cylinder, but no major porting or head work was done. The ECU mapping is 100 percent factory and is not available to the public right now, but KTM is notorious for sharing what it has learned racing/testing with the public. So, what they are running now will likely be available soon if it’s proven to be better. The FMF pipe and silencer combination is another item that wasn’t available to the public at the time of our test, but by the time this issue comes out, the general public will be able to purchase this very same exhaust.

With this machine being built for extreme conditions, the team adds an electric fan kit to the throttle-side radiator to keep the bike from boiling over. This item can be purchased through KTM’s hard-parts catalog or your local dealer.

Major upgrades to the chassis come in a few different shapes and sizes—the most notable being the addition of WP Pro Components. All the factory-level race team members run a version of the WP Cone Valve fork and Trax shock. Cody uses the AER Cone Valve fork up front. Yes, that is an air fork being used off-road. The WP AER 48 cone valve fork combines the cone valve damping system with the AER air-spring system. One leg contains the damping, while the other leg houses the pneumatic air chamber. But, this is not a stock WP AER air-fork leg mated to a Cone Valve damping leg. Each fork leg on the AER cone valve is unique.

A Trax PDS shock is used in the rear with a system that registers when the rear wheel has no ground contact and immediately opens an oil bypass, allowing the rear wheel to drop, returning to the ground faster than a conventional system, with the end result being improved traction. WP Pro components are available to the public, and although you probably can’t get exactly what is in Cody’s suspension, you will be able to get pretty close. Other chassis upgrades include a factory Brembo rear caliper, Xtrig triple clamps, IMS Core sharp MX pegs and a Nihilo Concepts billet-aluminum throttle housing. Wheels are OEM hubs laced up to Excel A-60 rims wrapped in Dunlop tires. In the rear, a foam mousse tube and Dunlop AT81EX gummy tire are used, while up front Cody prefers the Dunlop MX52 hard-terrain tire with a foam-tube insert.

EXTREME RESULTS
We have seen Cody Webb do some amazing things on a dirt bike, both racing and just out play riding, and we always wondered how much of it was the bike he was riding. After riding his Robby Goolsby-prepped 300 TPI race bike, we have a newfound appreciation for both Cody’s skills and the KTM 300 TPI machine. This is hands down the best 300 TPI bike that we have tested, and we are still blown away that more than 75 percent of the parts on this factory race bike are available to the public and can be purchased from your local KTM dealer if your bank account can handle it. 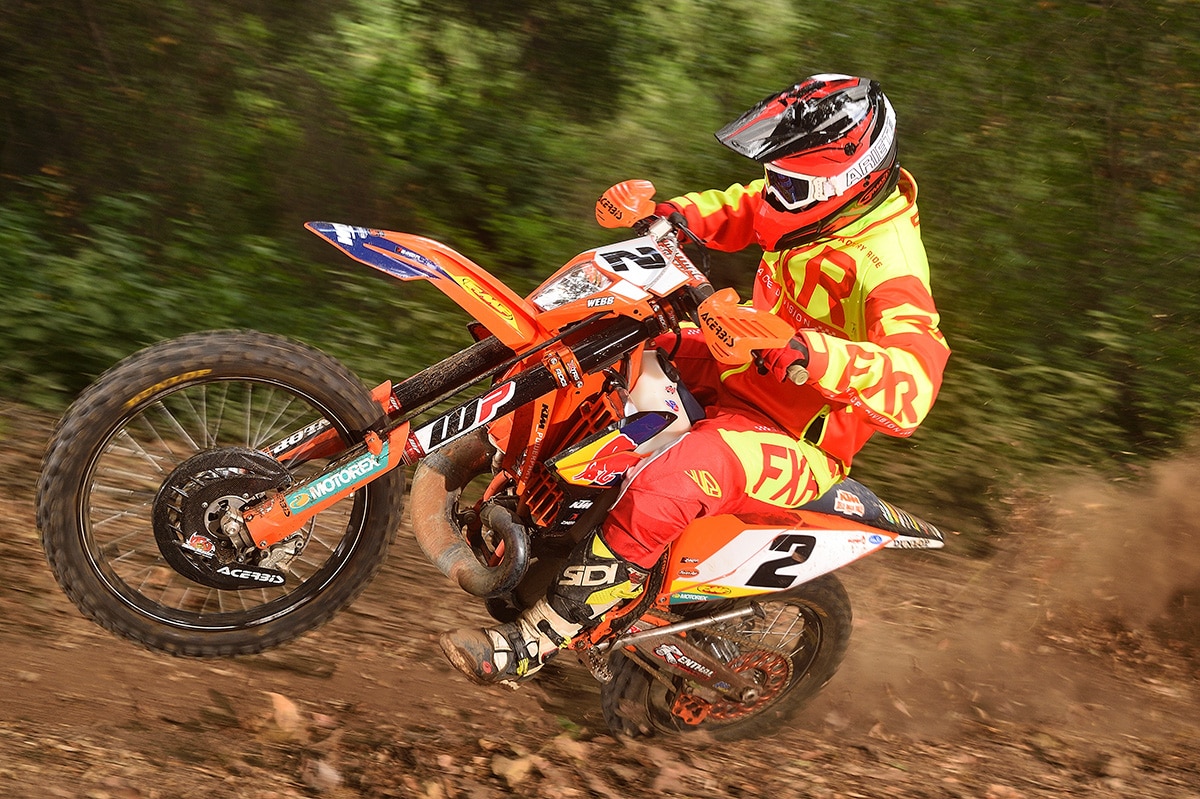 Cody runs a pretty neutral setup, making everything easy to adjust. About the only thing that was a little tough to get used to was how much rebound he runs in the rear shock. Yes, it is a Trax shock, but that feature is turned off and the rebound is turned up. This accomplishes the same thing—rear-wheel traction—but it’s all about making the rider comfortable, and this is what Cody likes. Yes, there are items like factory mapping, suspension settings, brake calipers and factory mechanic Robby Goolsby spending countless hours making the bike a work of art, but that’s to be expected. This bike works amazing for what it’s built for. The gnarlier the trail, the better. Our testers kept saying, “Man, I felt like Cody doing that!” Okay, we probably didn’t look like Cody doing it, but for that split second we felt like it, and that’s all that matters.