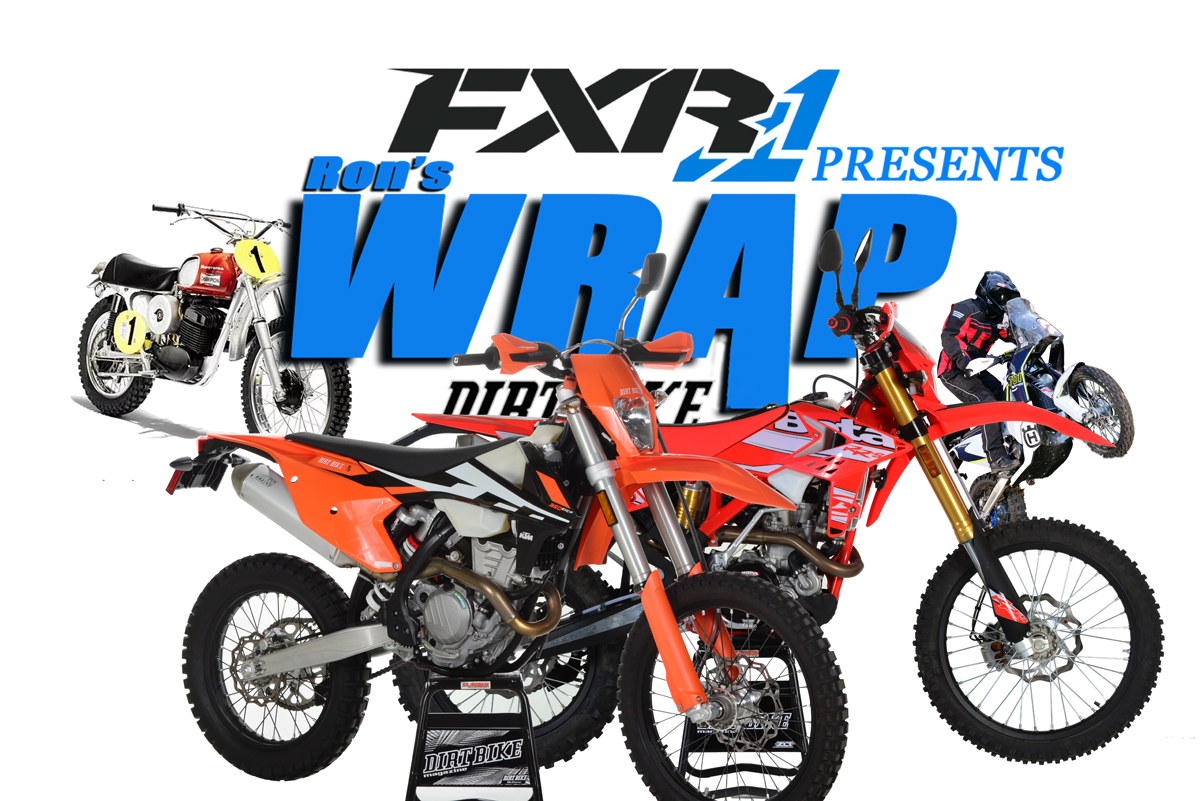 THE TWO GREATEST DUAL-SPORT BIKES OF 2017 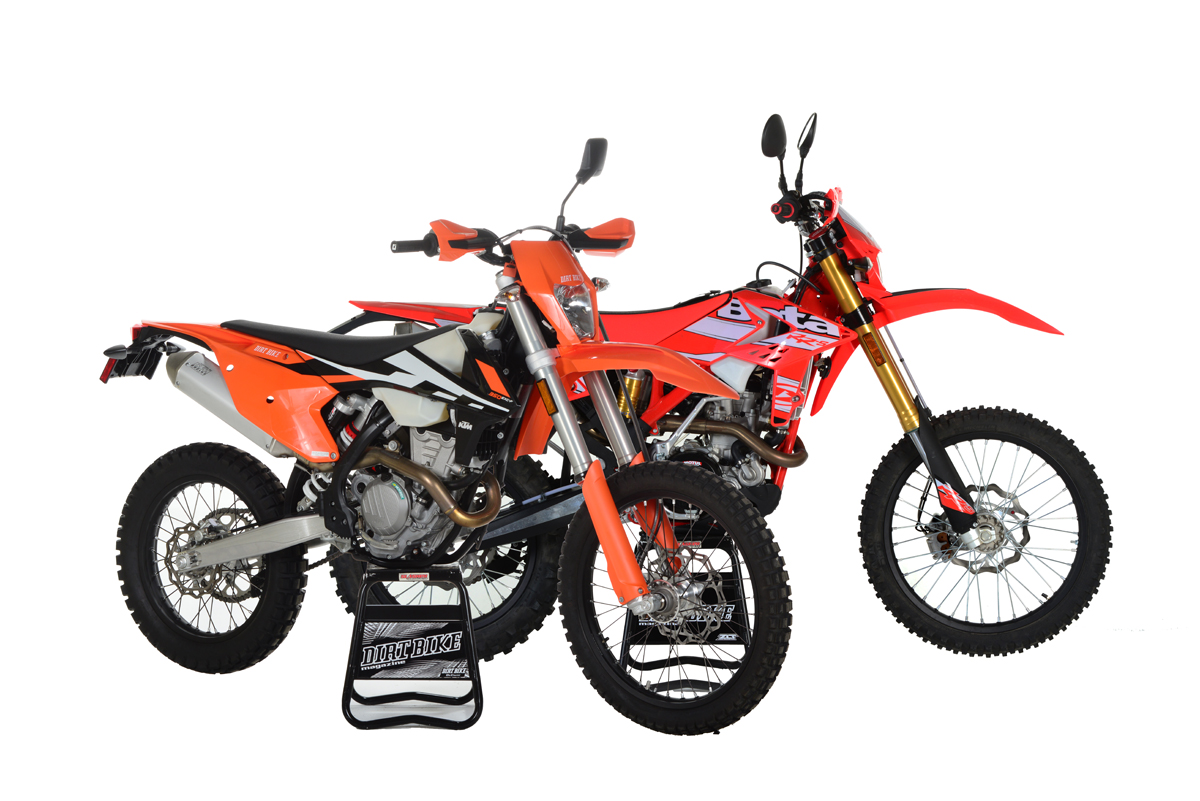 Dual-sport bikes have changed. Man have they changed. Right now there are two makers that are taking the dual-sport bike to a new level. KTM and Beta both have full lines of street-legal bikes that are far, far superior in the dirt to anything that has ever been made. Additionally, Husqvarna has its own line of dual-sports which use KTM motors. We never would have guessed that bikes this good could pass the EPA and DOT requirements, which are becoming more and more strict. 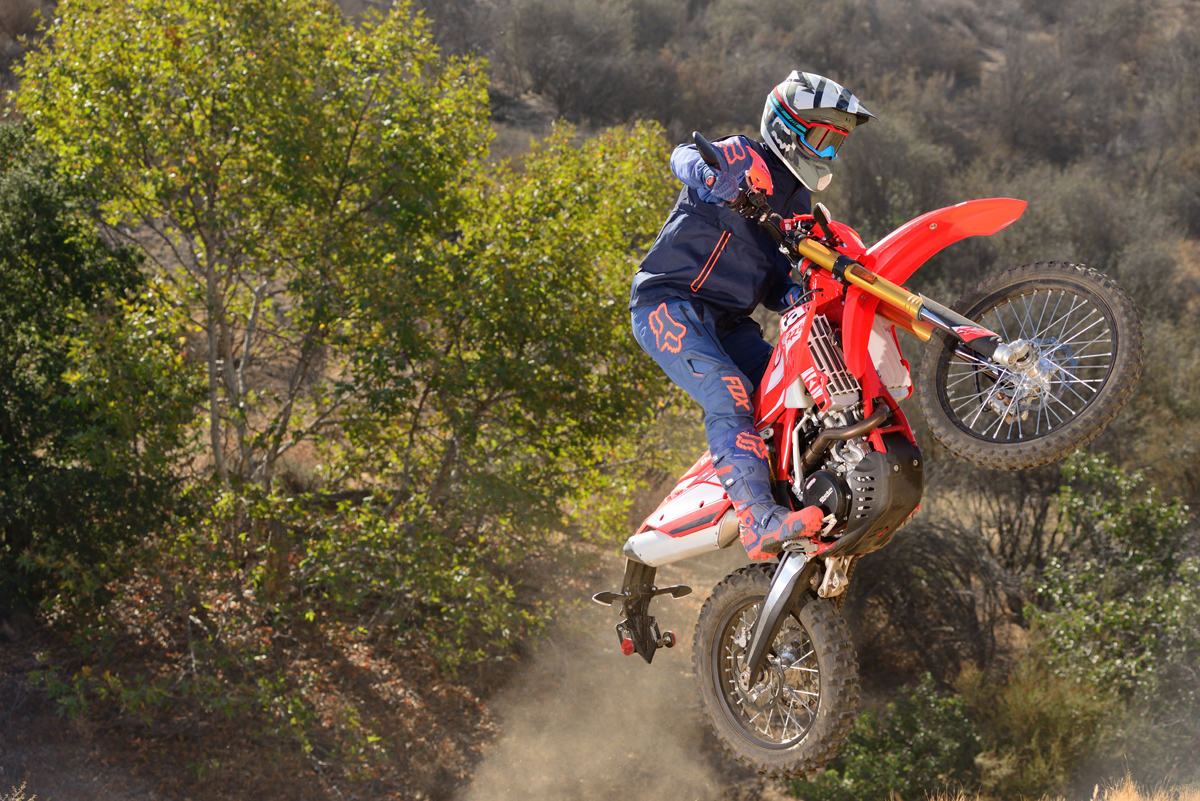 Right now we have both Betas and KTMs in the Dirt Bike shop. Both companies have 350s, and in both cases, that displacement has emerged as the favorite of most test riders and staff. Small displacement bikes always–always–handle better than bigger ones, and it seems that this size still has enough power so that you really aren’t sacrificing anything. Later in the year, we with have a three-bike shootout between the Husky, KTM and Beta 350s, just as soon as we get our hands on the Husky. In the meantime, here’s a look at the test in progress. 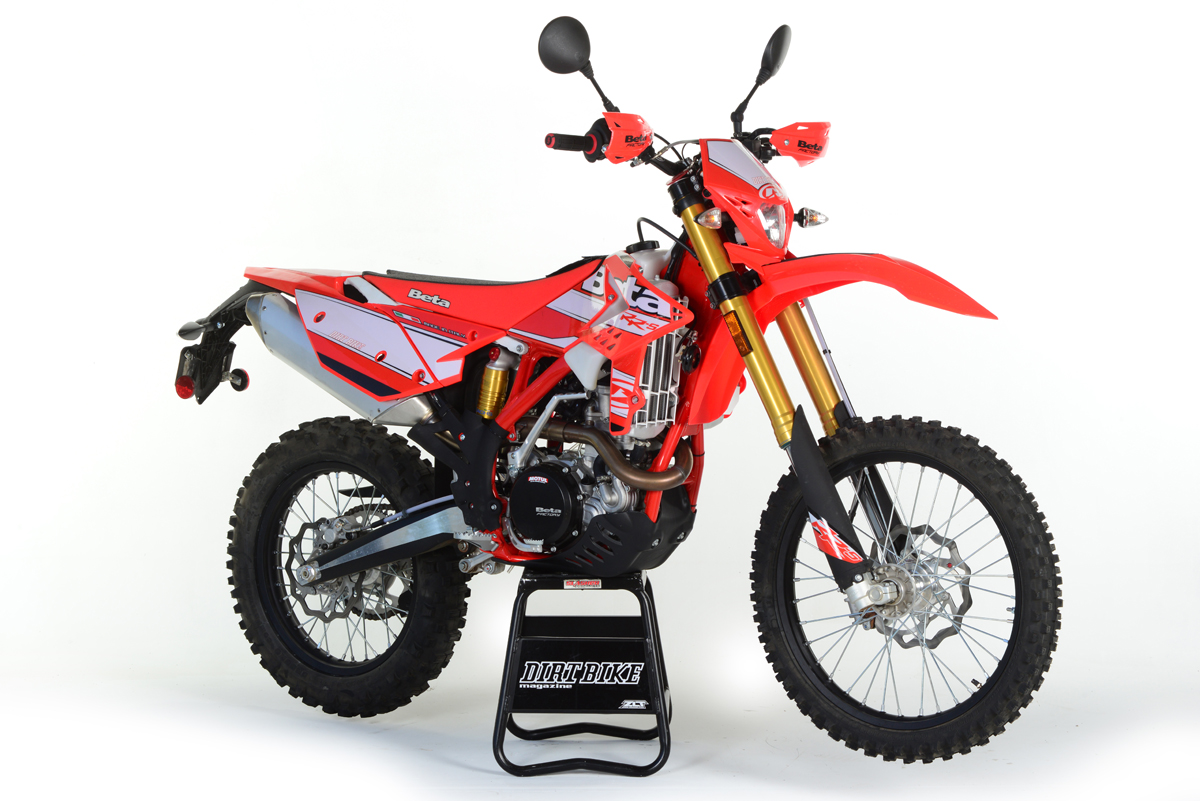 Beta has a key advantage. As a small manufacturer, the Italian company isn’t held to the same standard as KTM in emission and noise. The 350RRS seems more like a dirt bike. It’s less quiet and has more aggressive tires. Beta nailed the EFI settings so well you would never know that it’s a dual-sport bike. Also, if you want to go racing, the Beta is also easier to modify. You can install a competition exhaust without ill effects and changing the fuel mixture isn’t that hard if you know what you’re going. The bike’s biggest disadvantage is weight. It weighs 263 pound without fuel. 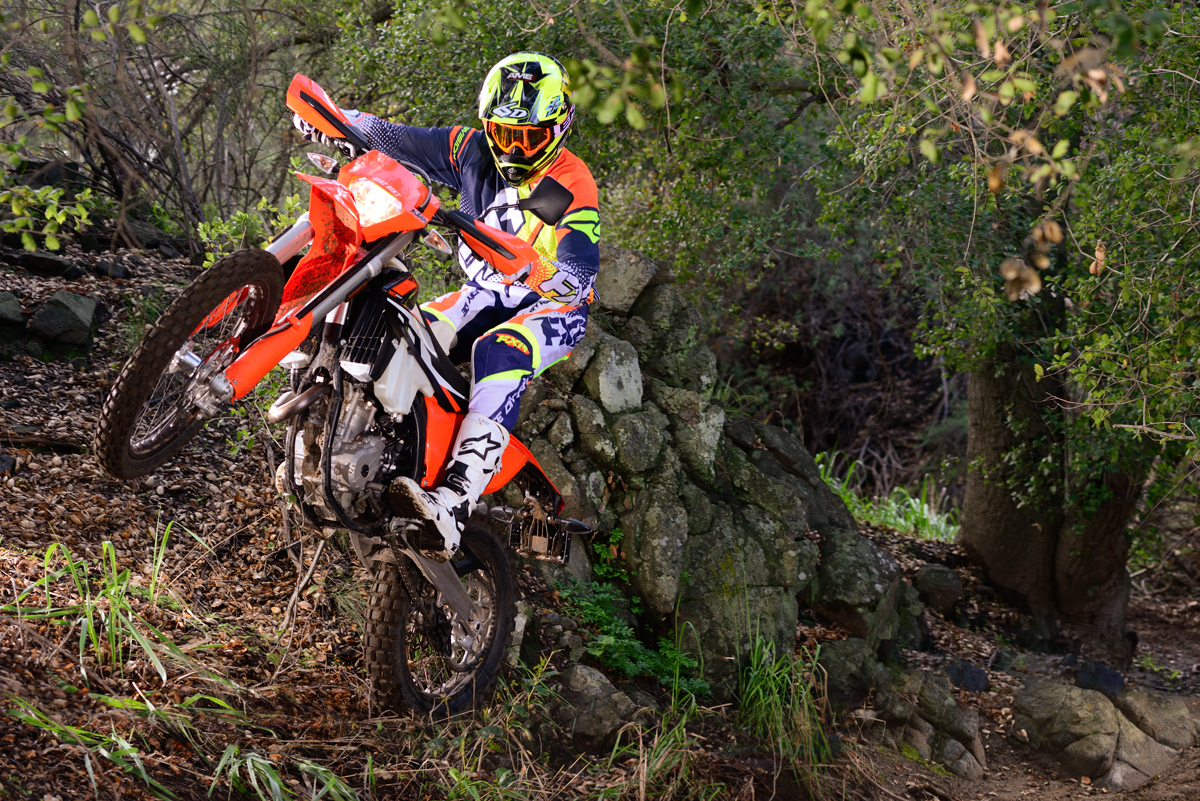 We had to wait a very long time for the 2017 KTM 350 to arrive. In the aftermath of the Volkswagen emission scandal, the EPA  slowed down the approval process for all new models. And the KTM dual-sport bikes are completely new for this year. The bike is much quieter than the Beta. In fact, it might be quieter than any dirt bike we’ve tested–aside from the 250cc version of the same bike. Despite that, KTM has done a great job with the power. It’s reasonably powerful, and once again, the bike runs cleanly without any signs of fuel starvation. KTM obviously work very hard to make the bike legitimately pass noise and emission test without any real sacrifices. The most impressive part is that the bike weight 241 pounds. If you wanted to modify the motor in any way, though, you’re opening a can of worms. 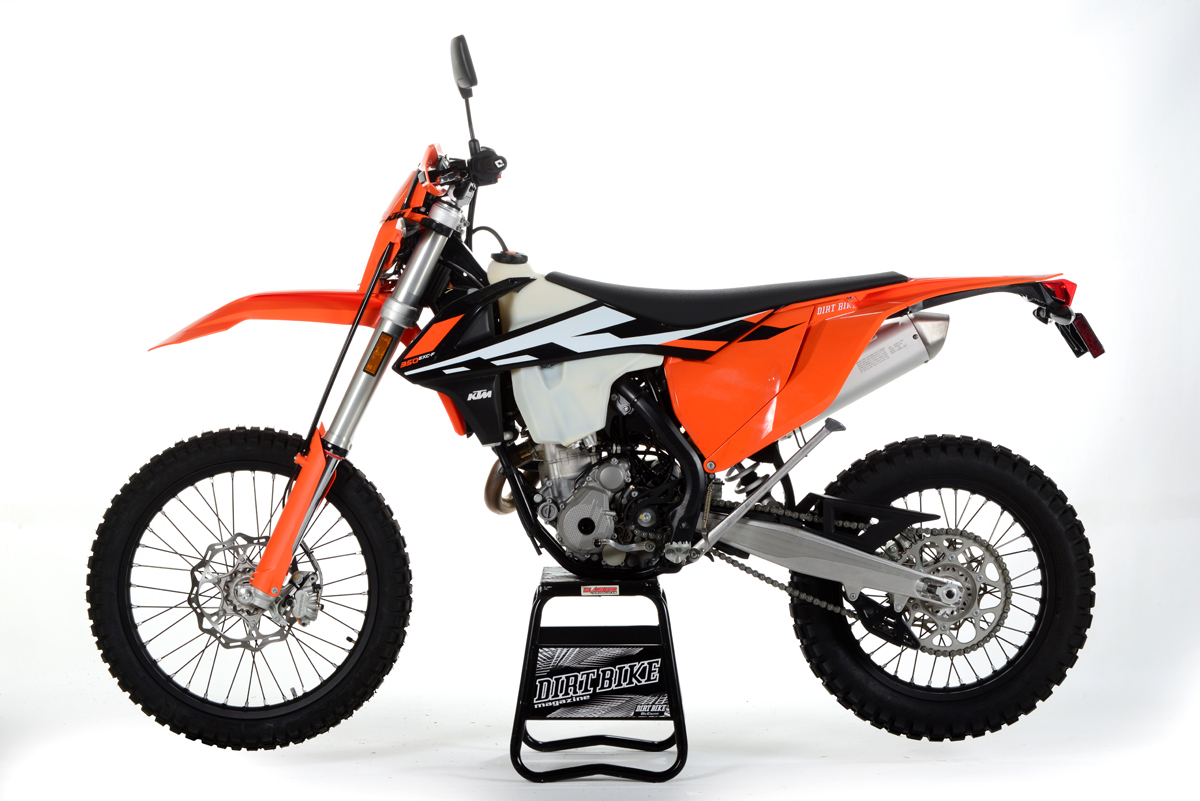 Riding the two bikes back to back, they both have strengths and weaknesses. The KTM might have a little more motor despite being so quiet. It’s weight advantage is also obvious. In suspension, the advantage goes to Beta, which has more effective off-road settings. The Beta is also has a wider spread of gear ratios and far better tires. The KTM’s Continental TKC80s are more typically seen on adventure bikes and were probably chosen to help pass the drive-by sound test. The Beta has Michelins that are DOT approved but excellent in the dirt. When we collect the bikes for a shootout, we will probably have them all wearing the same sneakers. Stay tuned. 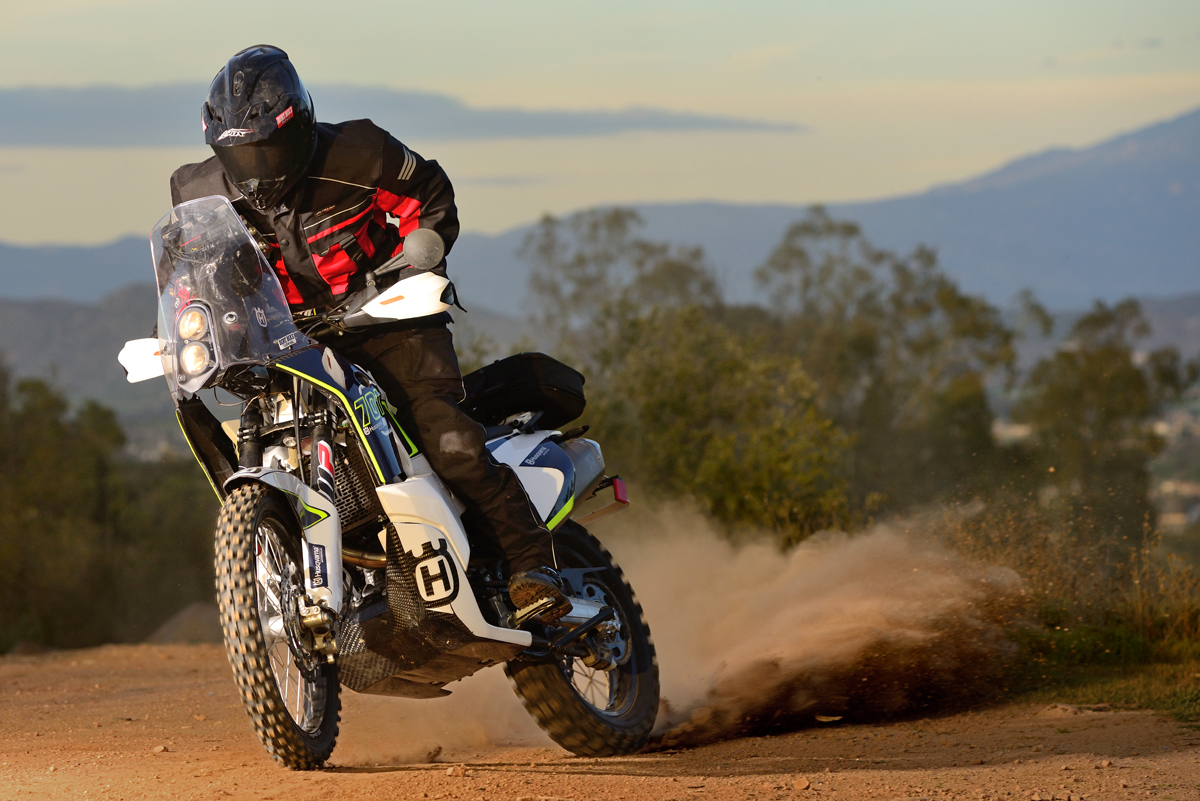 In the May issue, we’ll be featuring one of the most exotic custom bikes we’ve ever ridden. It’s a Husqvarna 701 that’s been modified with rally equipment from South Africa. This bike is incredible, and it’s far too much motorcycle for the Dakar rally. Those competitors are limited to 450cc in the current rules. The 701 is probably the most powerful single-cylinder dirt bike you can buy, as least in the off-road world. Check out the video on the Husky 701 Rally by clicking here. While we are on the topic, check out the special BMW R1200GS Rally in this Altrider video.

THE REAL HEROES OF SUPERCROSS

Factory riders work hard these days. The guys who get their bikes to the races each week work much harder as they crisscross the country dealing with winter storms and crazy schedules. This Kawasaki-produced shows very little of the hardship, but it does give you a glimpse inside the big rig. 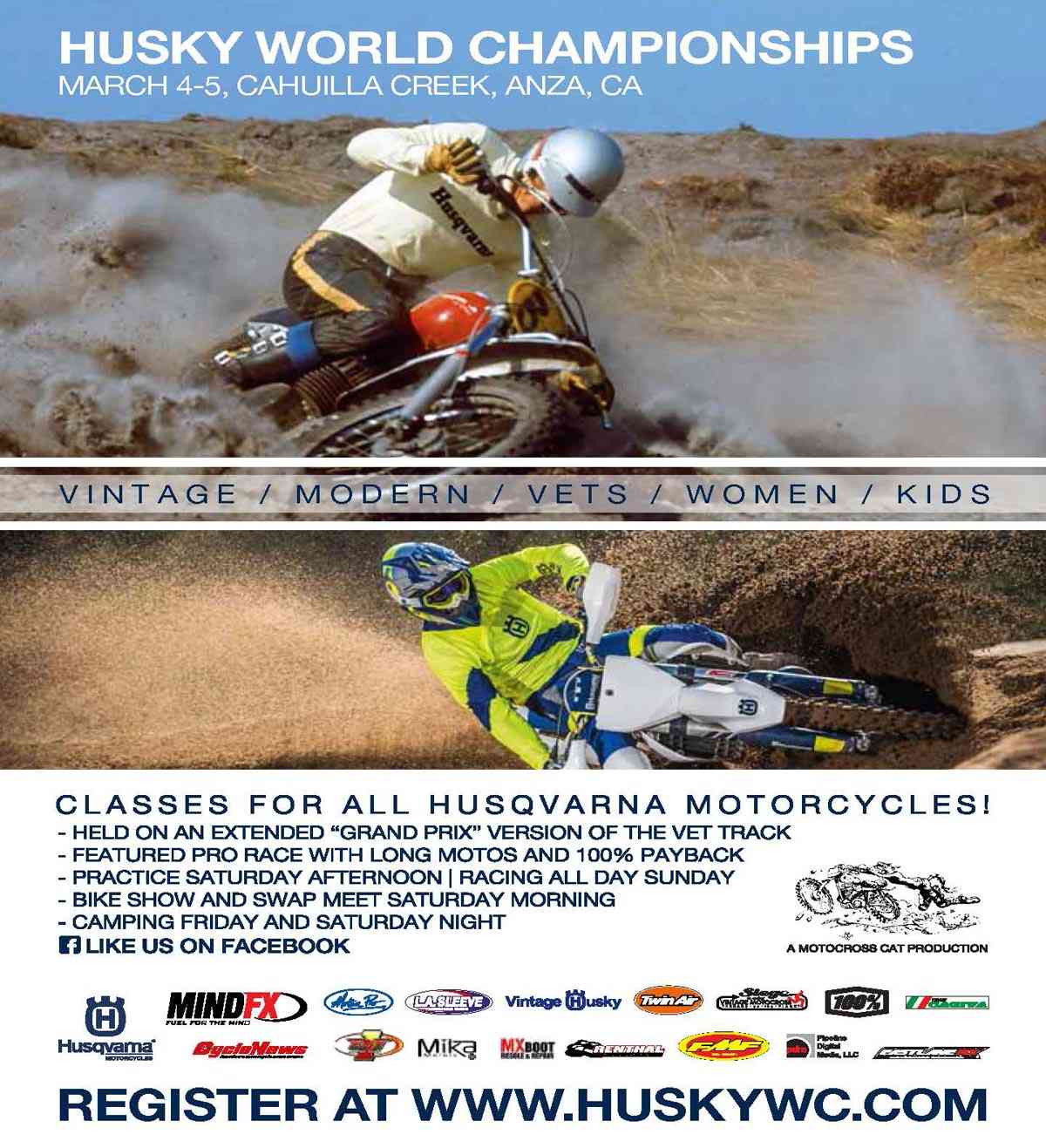 In two weeks, my buddy Brian Catterson is putting together the inaugural Husky World championship, which will welcome both modern and vintage Husqvarnas. Here’s what he has to say about Husqvarna’s legacy and the reasons for the event.

WHY HUSQVARNA? No brand has been more influential than Husqvarna in the history of American motocross. In the mid-1960s, Edison Dye traveled from San Diego to Europe and returned with two Husqvarna motorcycles. One of these he gave to desert racer Malcolm Smith, who won his first race on his new bike by a whopping 22 minutes! Dye then hired Swedish racer Lars Larsson to travel around the USA and sign up dealers. Larsson competed in local “scrambles” races on theweekends and won pretty much everywhere, the Yanks’ heavy British and American four-strokes no match for his lightweight Swedish two-stroke. Soon, everyone wanted a “Husky”!

In 1966 Dye brought over 250cc World Champion Torsten Hallman and a slew of other top European riders and began promoting the Inter-Am race series, in the process introducing Americans to the European sport of “motocross.” To honor these accomplishments, the Lifetime Achievement Award at the annual Vet World Championships was named after Dye, who passed away in 2007. Larsson, meanwhile, moved to Southern California permanently and helped found an apparel company that today goes by the name THOR (for Torsten Halman Off-Road). A half-century later at age 75, he still races motocross regularly!

Malcolm Smith achieved further notoriety in Bruce Brown’s classic 1971 documentary film On Any Sunday. The iconic scenes of Smith and his movie-star pal Steve McQueen riding their red-and-chrome Huskies against the Southern California landscape were etched into impressionable viewers’ brains, and countless young men and women took up the sport because of it. In recognition of that influence, Motorcyclist magazine named Smith its “Motorcyclist of the Century.” Today Malcolm Smith Motorsports is one of the biggest and most successful motorcycle dealerships in the world.

The same year On Any Sunday debuted, Husqvarna achieved another milestone. Team rider Mark Blackwell beat Brad Lackey by 1 point to finish as top American in the Trans-AMA series, thus becoming the first-ever 500cc National Champion. Blackwell went on to a long and distinguished career as a motorcycle industry executive, and today serves as a brand ambassador for Husqvarna Motorcycles North America.

Over the ensuing decades Husqvarna has changed hands a few times, moving from its native Sweden to Italy and Germany and, today, to Austria, where it is a sister brand to KTM. There have been numerous other success stories along the way, and this weekend we celebrate these legendary machines and the men who rode them. Welcome to the Inaugural Husky World Championships!