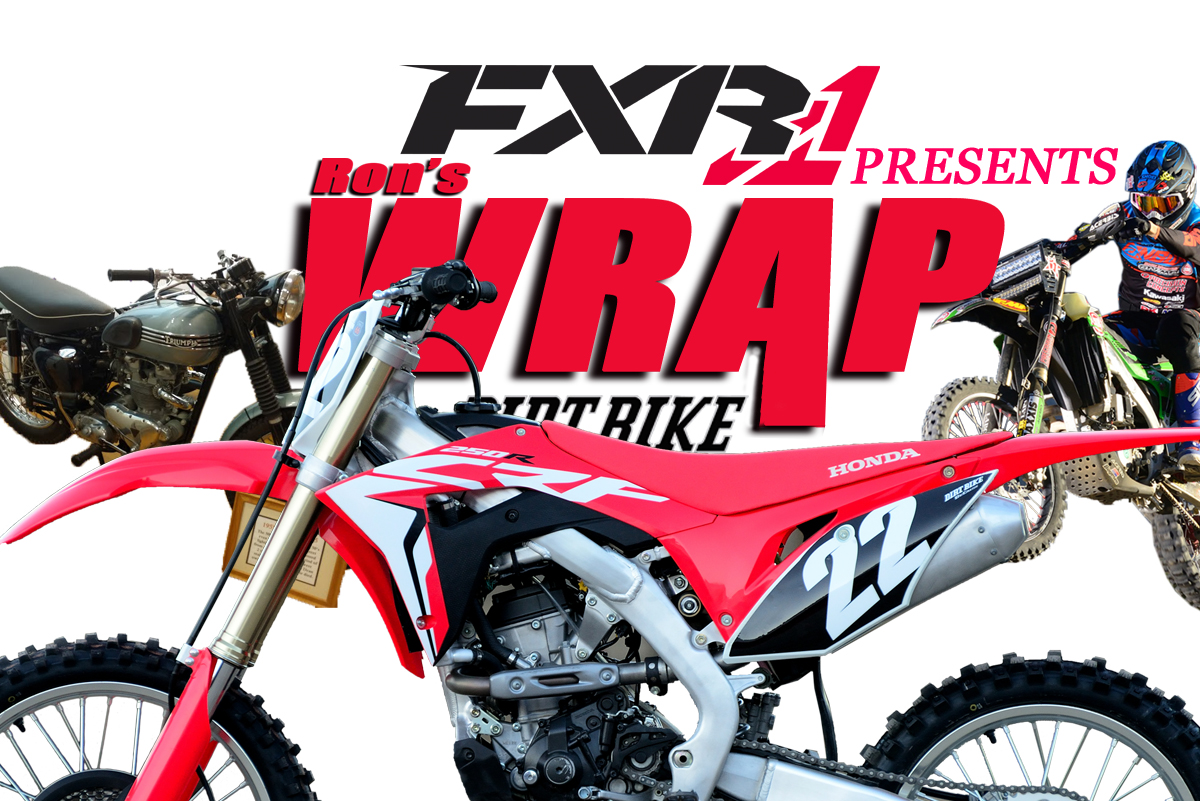 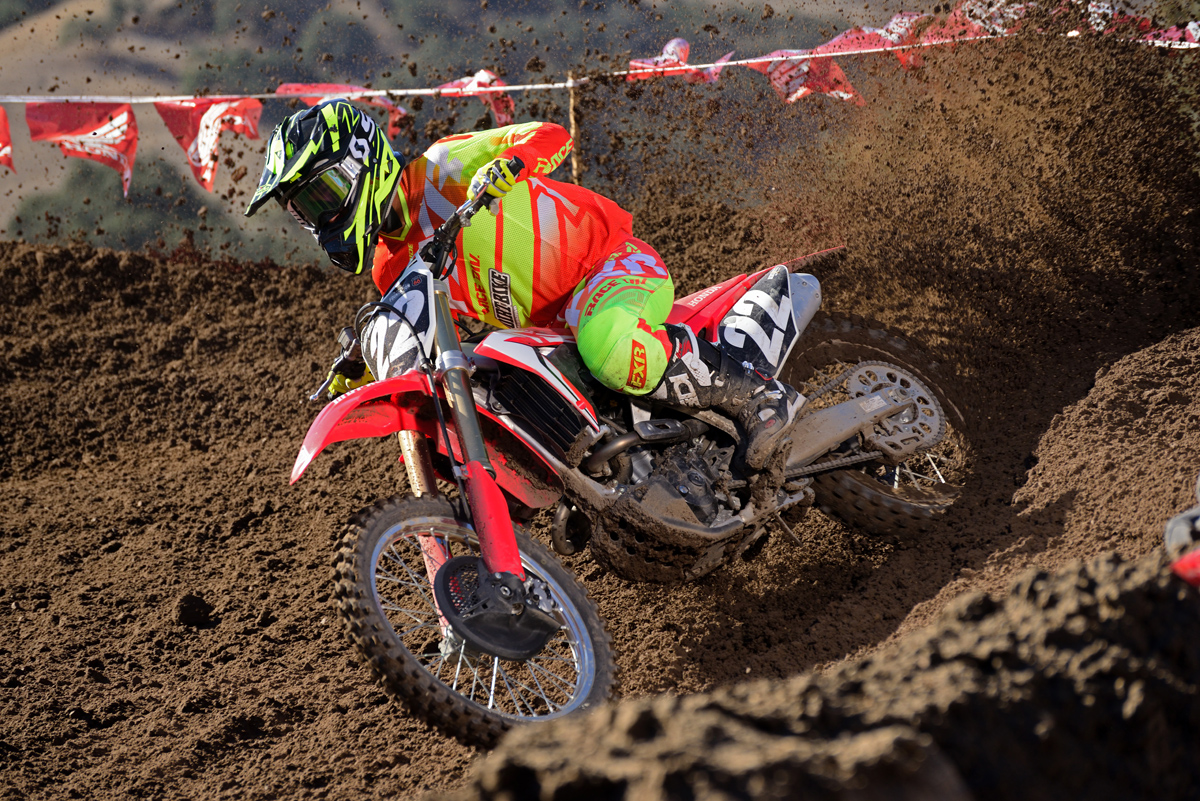 We got our first chance to ride the 2018 Honda CRF250R this week. This is a new bike–a really new bike. Redesigned parts come and go each year, but it isn’t often that a manufacturer starts over with an entirely new concept. The Unicam SOHC design is gone, the kickstarter is gone and the bore and stroke configurtion is radially different. 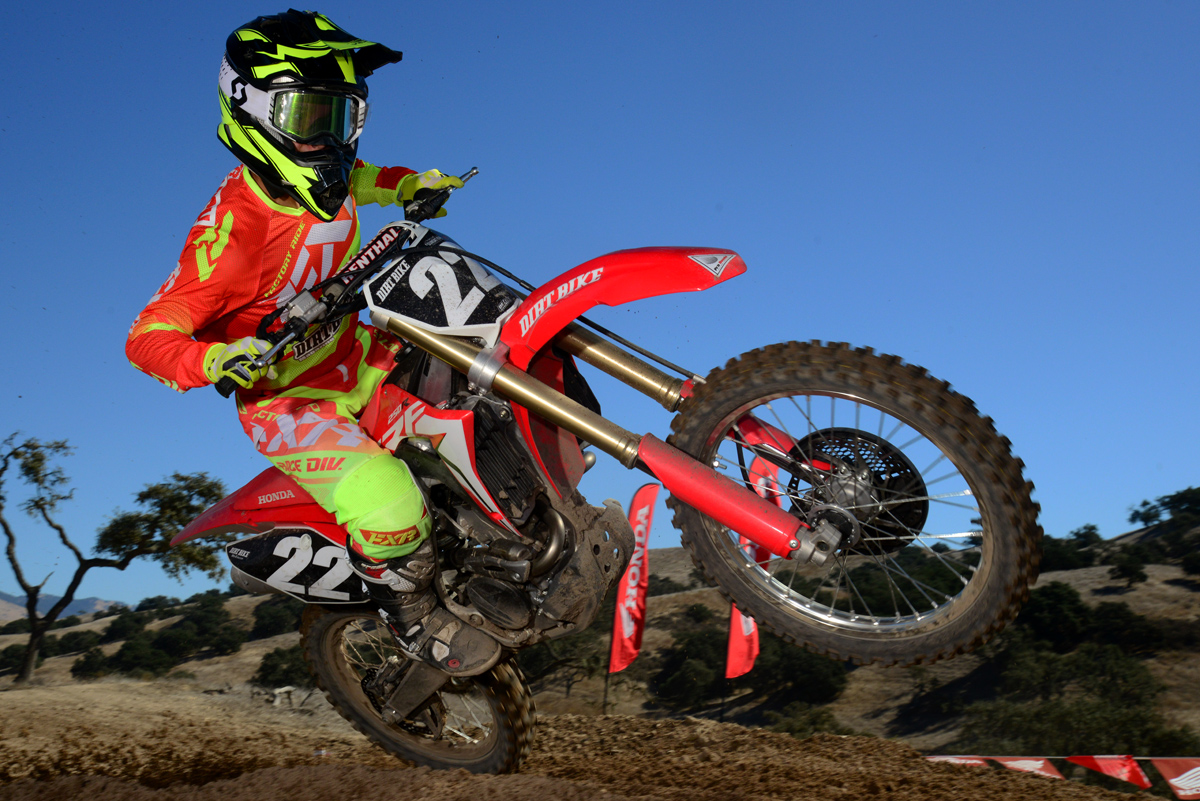 The underlying goal for it all was to have a motor that revs. That’s why the stroke is much shorter, that’s why it has two cams and that’s why it uses finger followers between the cams and the valves. This allows the engineers to do away with the valve buckets, which is an important place to lose weight. It also allows a more radical cam profile with more lift and more duration. The chassis is completely different from last year’s CRF250R, too. In this case, the design was taken from the CRF450R, which was new in 2017. 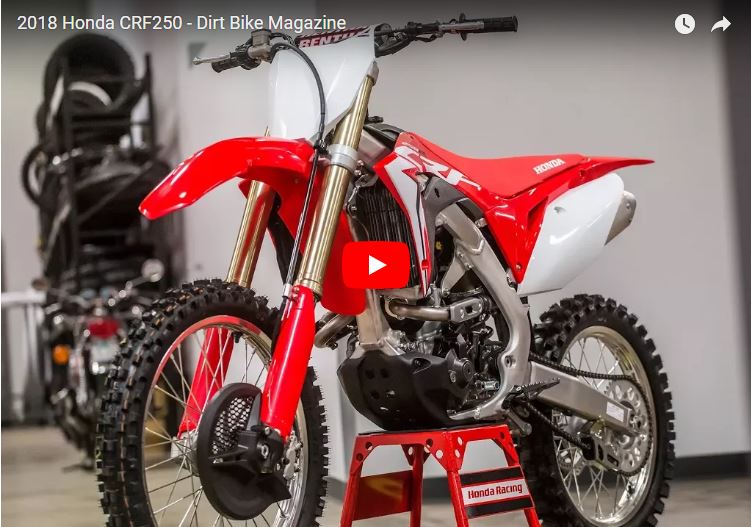 For a video with more tech info, click on the image above. This week was all about riding the bike. The one crucial fact to take away is that Honda was absolutely successful with goal number one. It revs! It’s a complete opposite of last year’s CRF250R, which was all torque. The new bike is pretty sleepy down low, but it just keeps on revving and revving, building more and more power as to goes. It finally signs off with a hard bump into the rev-limiter way up high. No one complains when that happens. Most riders are already fighting the urge to shift. 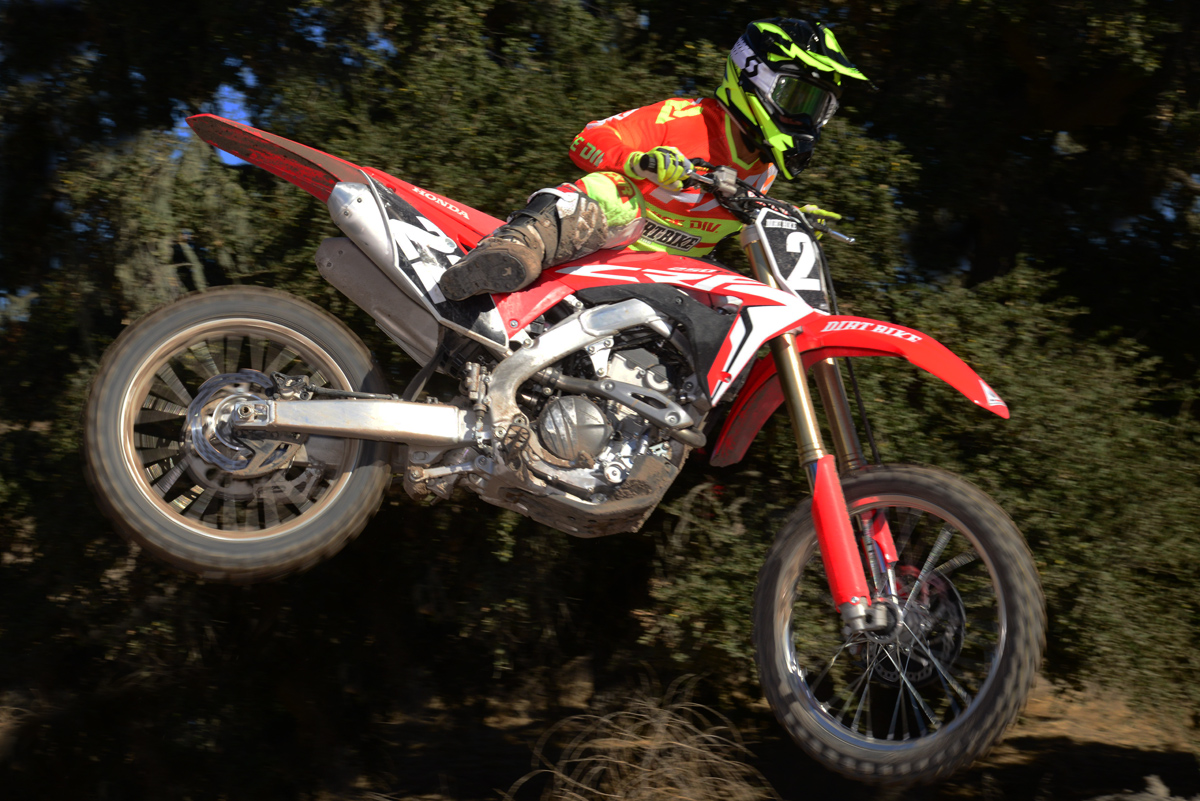 If this sounds like the description for a KTM or Husky 250 four-stroke, bingo. There’s no doubt that Honda was heavily influenced by the guys in Austria. The fact that the motor is electric-start only with no kickstarter is evidence of that. In motor performance, the Honda is easily competitive with those bikes. In suspension, it might have an edge; the coil-spring Showa fork is excellent. In weight, the Honda will be at a disadvantage. We haven’t had the chance to put the new Honda on our scale, but Honda’s own figures report that it’s 7 pounds heavier than last year’s CRF250R, which was already 3 pounds heavier than the KTM. The full test will appear in the January, 2018 print issue of Dirt Bike. In the meantime, check out our video test of the 2018 Honda CRF250R by clicking here.

OUR BIKE WON THE 24 HOUR–WITHOUT US! 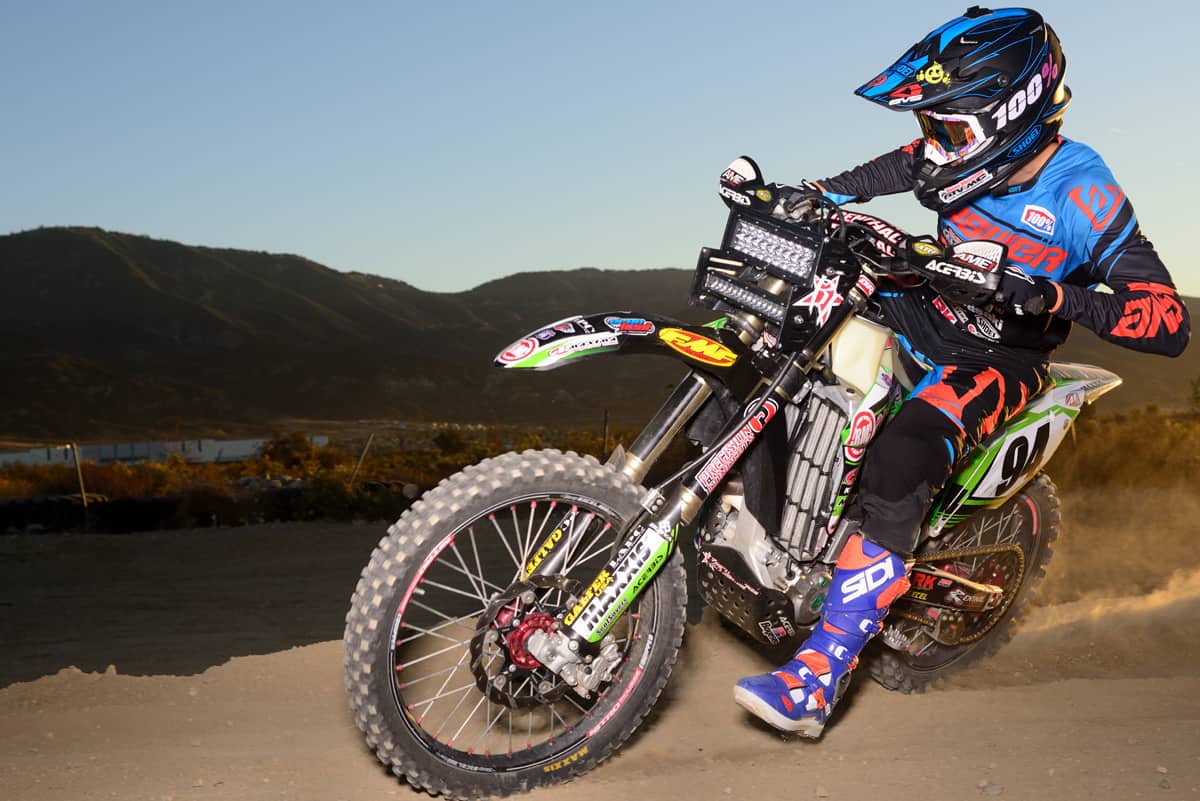 Last week we loaned our 2017 Kawasaki KX450F test bike to Robby Bell and he let a bunch of his friends ride it all day.  He wasn’t being rude, he just used it as a platform for his assault on the JBC 24 Hours of Glen Helen. Our test bikes are usually well used by the end of a year, but the manufacturers don’t mind. They want us to have experience with their products over the long term, and Kawasaki agreed that this was a good use for the KX450F prior to its return. 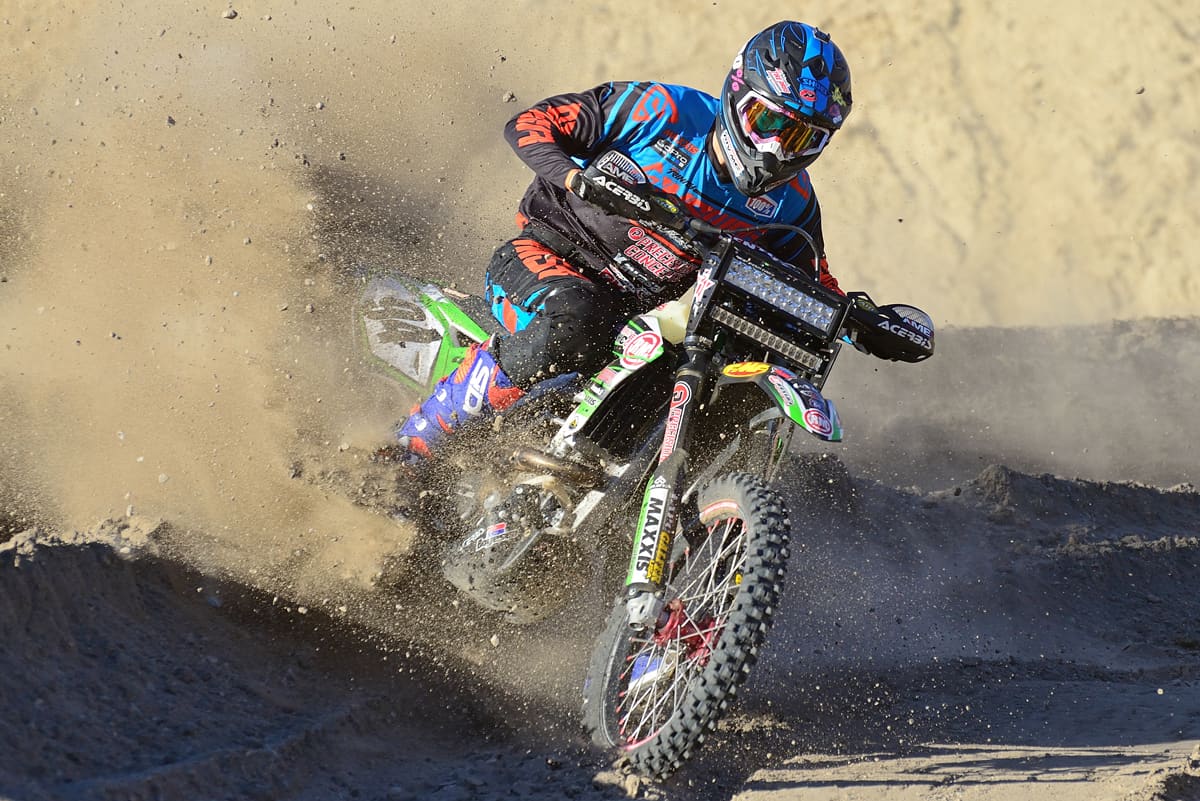 Robby refurbished the bike and built it into an endurance racer. He didn’t actually ride the bike himself–he worked as team manager and let Justin Seeds, Travis Damon, Michael Delfante and Blayne Thompson ride. He said his new role was much harder and more stressful, and he got less sleep. 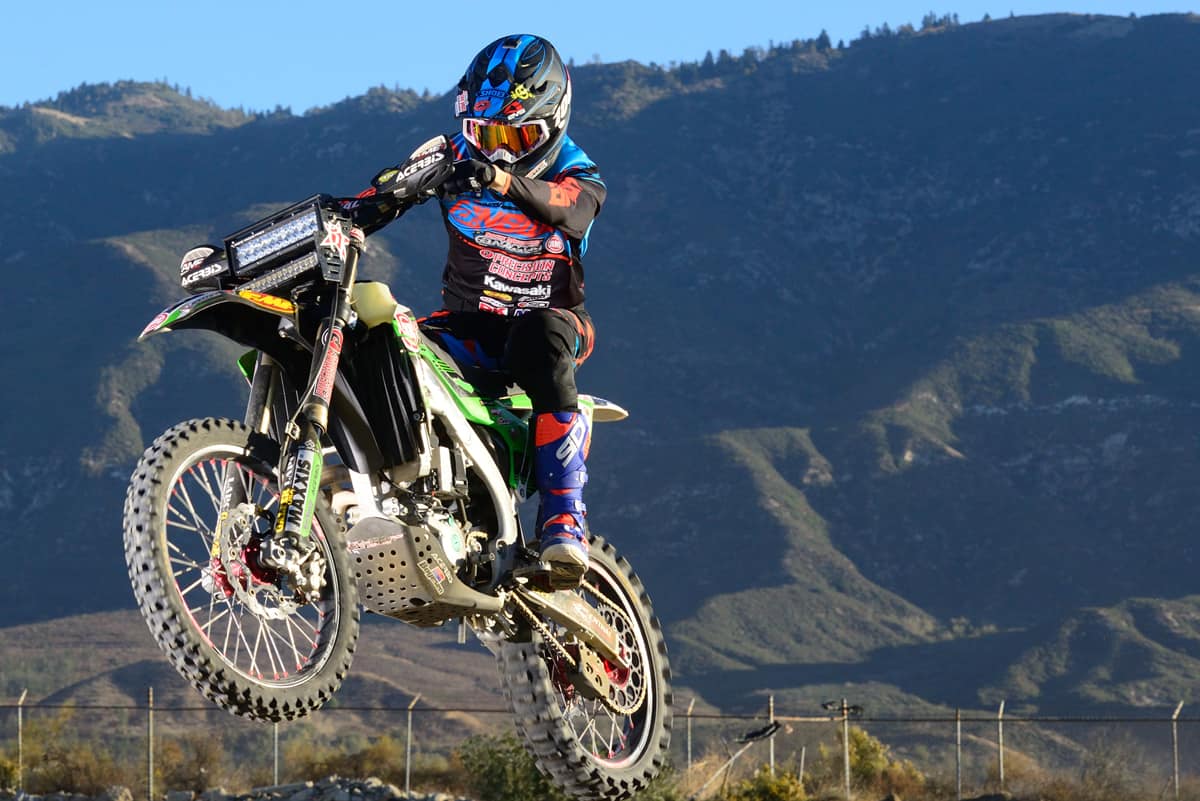 We got to check out our bike afterward and shot a few pictures of Robby riding it at Glen Helen. The bike ran as fresh as ever, even if the tires were well worn. The end of the race had come down to a sprint finish between Bell’s Precision Concepts team and the Ox Motorsports Honda team, and there wasn’t time for a badly needed tire change. The only  trouble the Bell team had en route to their win was a broken battery box. The lights were engineered as a total-loss system with a scheduled battery change every hour. When one of the two batteries came loose, it slowed down each stop. They still won with a few minutes to spare. Congratulations! 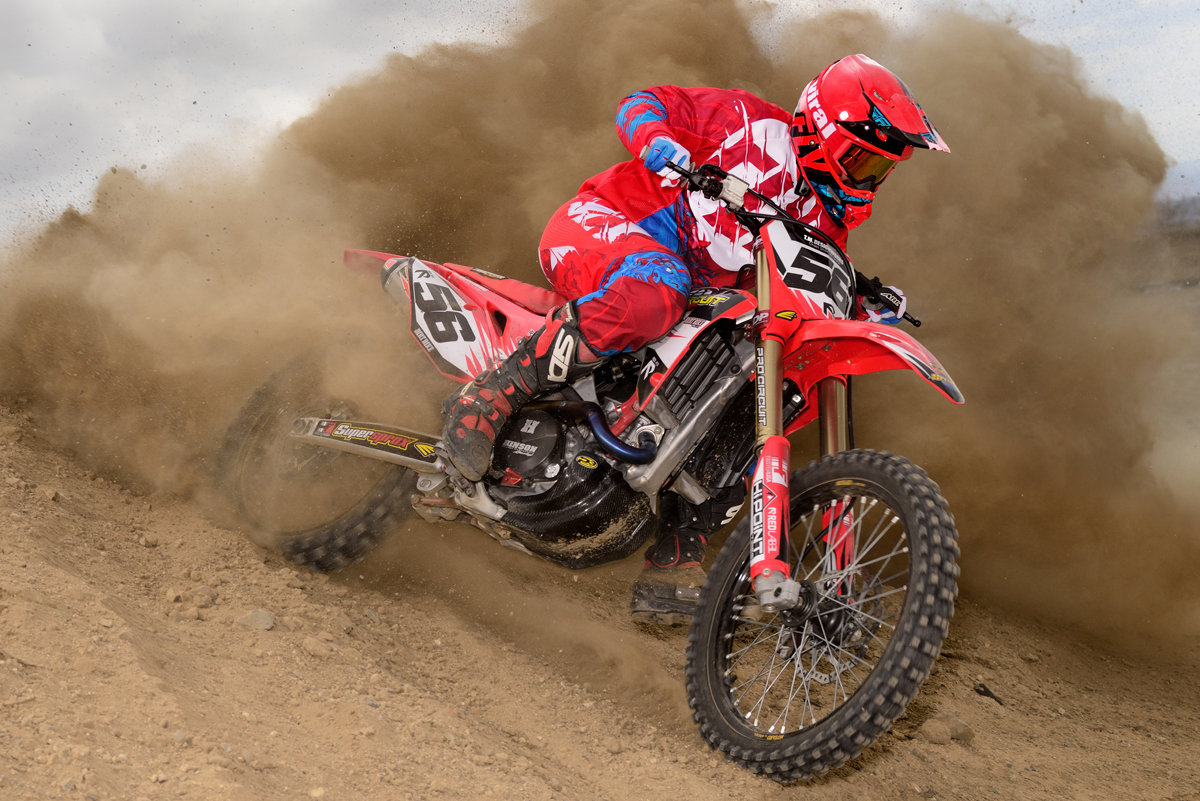 Another of our 2017 test bikes that was rebuilt at the end of the year was our Honda CRF450R. As most people know, the biggest difference between the 2017 and the 2018 models was the addition of electric start. We performed that modification to our ’17 model but it was a much more difficult and time consuming operation than we expected. For the record, we think it’s a better idea to sell your old bike and roll the money into a new one if electric start is that important to you. 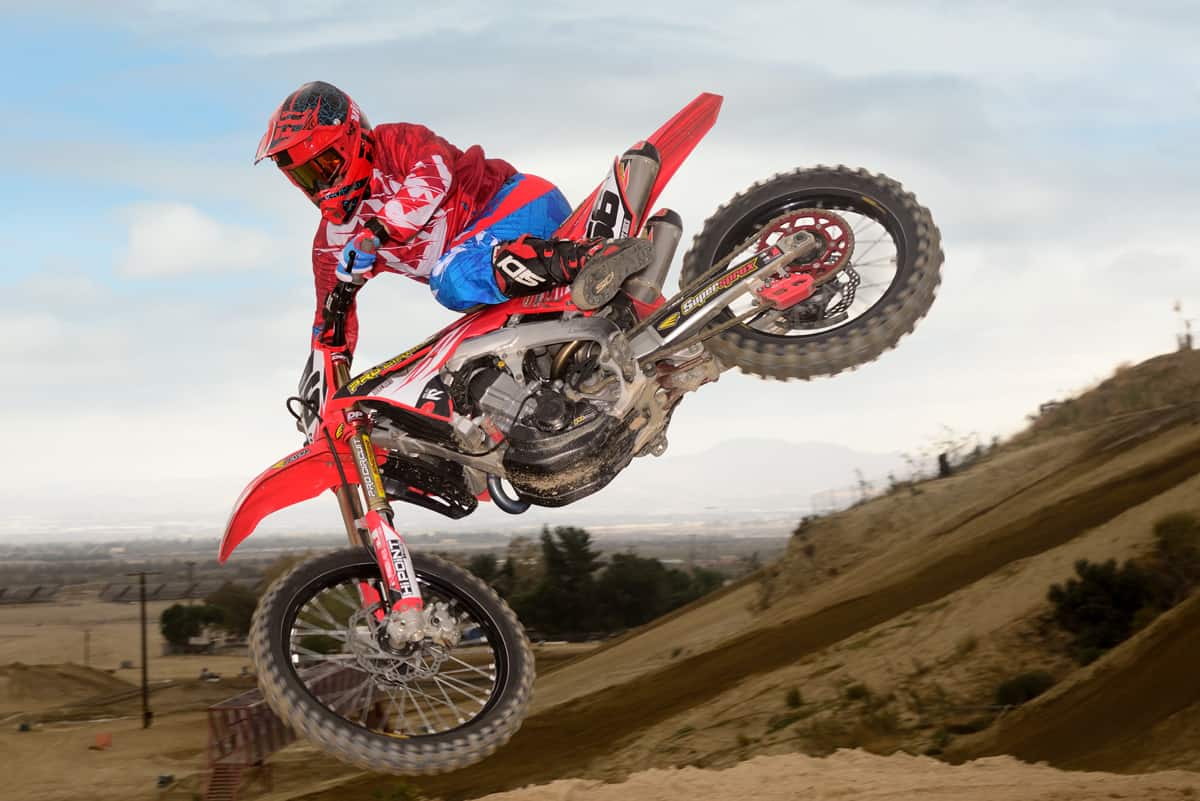 The rest of the bike got the Pro Circuit treatment, both motor and suspension. When it was all done, the bike was faster and more pleasant to ride than our new test bike. It was, in fact, purchased by one of our test riders so that it didn’t have to go back when the official loan period was up.

Some bikes are unlikely heroes. The Kawasaki KLX250 disappeared back in 2014 and to be honest, we didn’t know it was gone. It was just another old bike whose time had come. When Kawasaki re-released it with fuel injection early this season, it made us take another look at a bike we might have never considered for a test. We’re so glad we did! 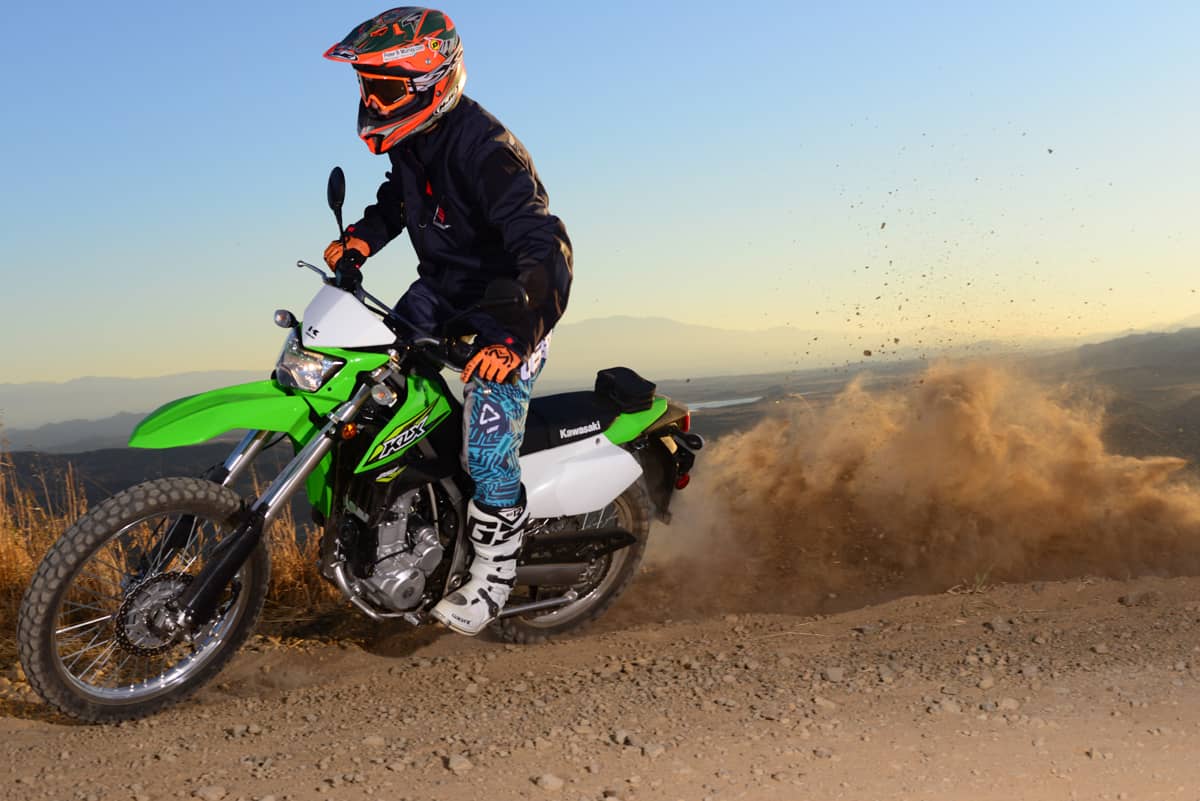 The arrival of faster, more capable small dual-sport bikes like the KTM 250EXC actually were a good thing for the Kawasaki. It takes the pressure off. The KLX is much slower and heavier, but it’s also more comfortable and far less expensive. We use it for exploring local dirt roads and even scouting out mountain bike rides. It’s a quiet, no pressure way to get around in the dirt, whereas the stiffer, more intense KTM makes you feel like you’re racing all the time. Check out the test in the January issue of Dirt Bike. 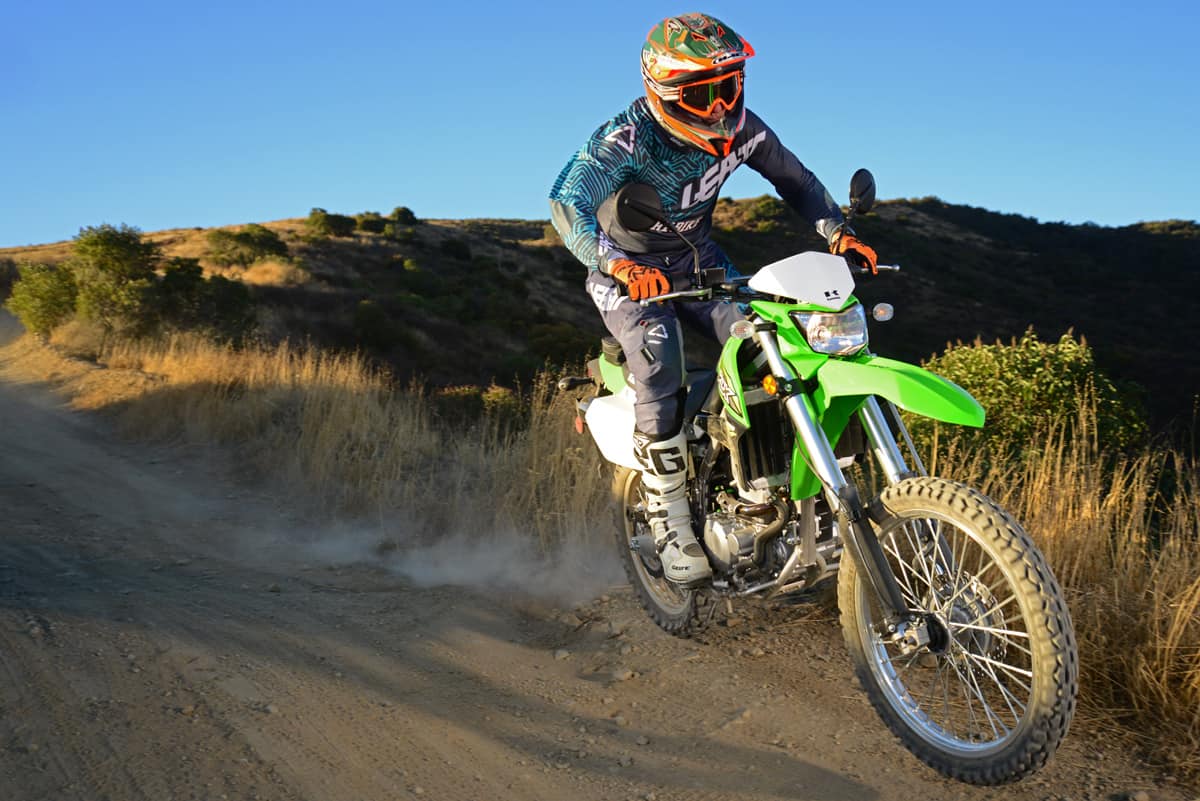 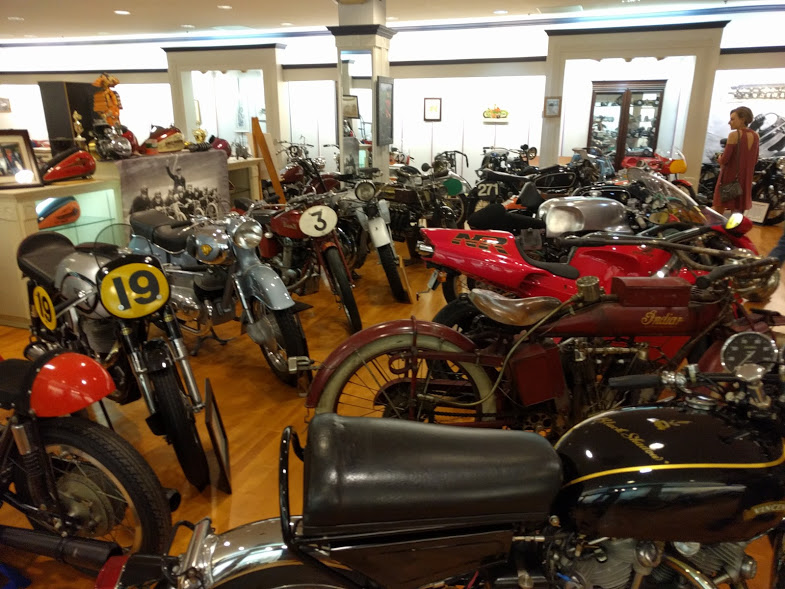 While we were on our way to the 2018 Honda CRF250R introduction  at Zaca Station, we visited the Solvang Vintage Motorcycle Museum, which is about an hour north of Santa Barbara, California. This is an amazing collection of very rare old motorcycles, ranging from a 1910 FN to recent Harley Davidson. Most of the bikes in the collection are so rare I had never even heard of them. 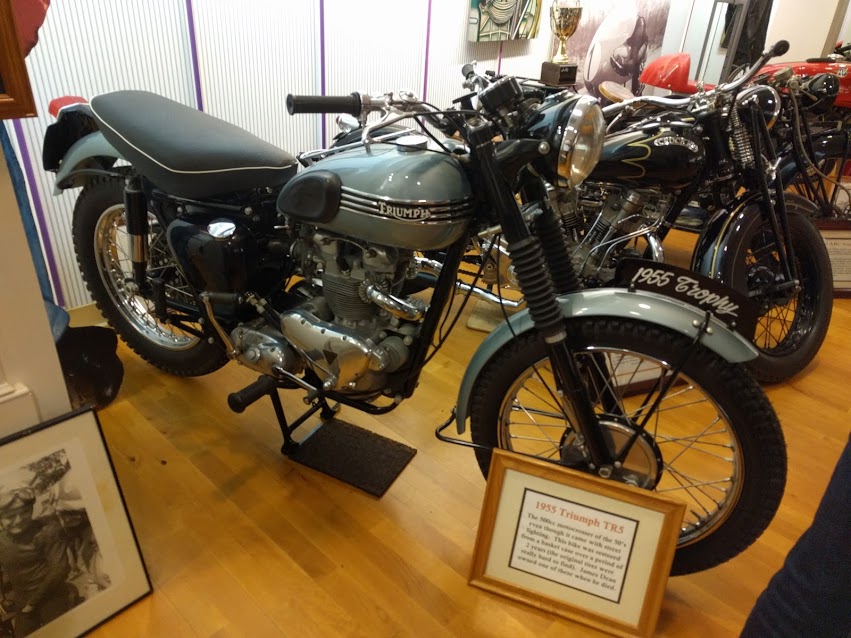 There are over 100 motorcycles of all sorts. One that was interesting was this 1955 Triumph TR5 motocross bike. Back then, there weren’t many bikes that were purpose built for MX. This particular bike is special to the museum’s owner, Dr Virgil Elings. It was the first that he restored himself. 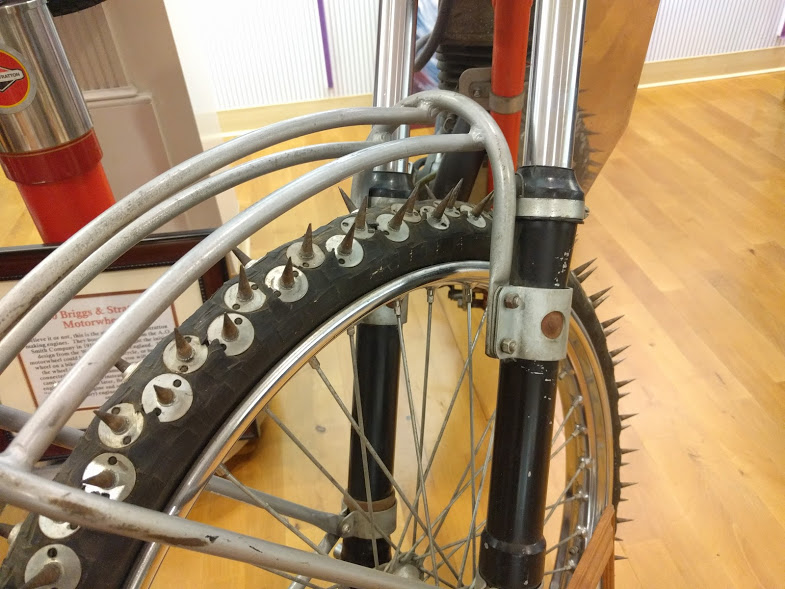 Most of the people in my group were fascinated by this Jawa ice racer. The spikes in the tires are about two inches long and very, very sharp. I can’t believe that anyone thought this was a good idea. 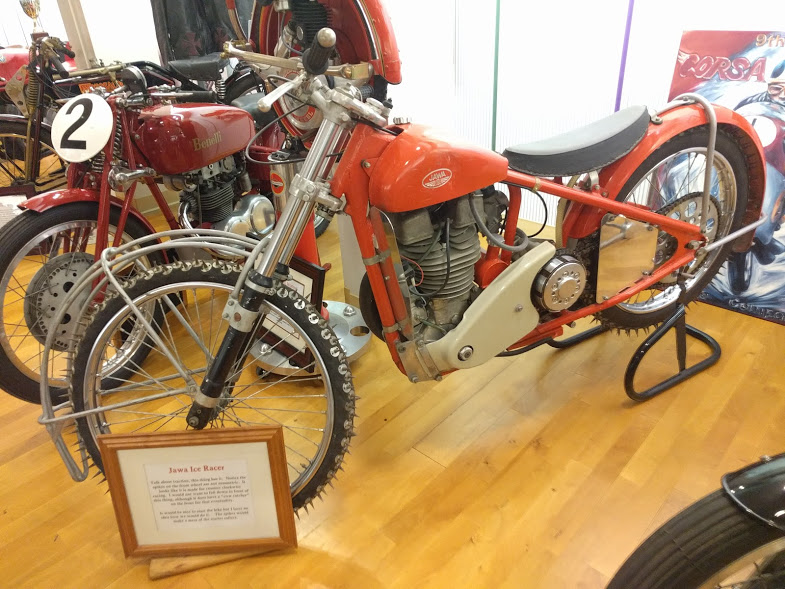 Another very cool bike was an unrestored Thor board-track racer from about 1914. Virgil wasn’t sure exactly how old it was and couldn’t find any information on it whatsoever. The tires, the tape, the seat and everything was original, over 100 years old and very fragile. Prior to Virgil’s acquisition, it had been in one family since it was new. 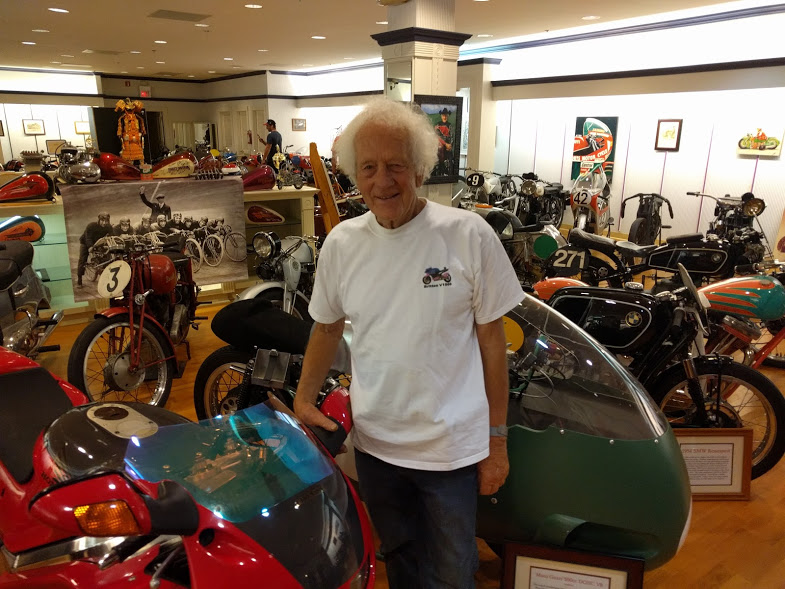 Virgil is an amazing, engaging guy who is happy to talk about each bike. The collection is diverse, with bikes from just about all countries and for all purposes. The museum is open on weekends from 10:00 to a.m. 5:00 p.m. and by appointment. Admission is $10. Check out the Solvang Vintage Motorcycle Museum website by clicking here.

Purvines Racing rider Gary Sutherlin got his second major off-road championship of the season last week by winning round eight of the Kenda SRT National Hare & Hound series. And he finally beat Taylor Robert to do it! Congratulations on ending it the right way! There’s one round left in the Series on November 12, but Sutherlin has locked it in a round early.

That’s it for now!

ENDUROCROSS: FOUR IN A ROW FOR WEBB