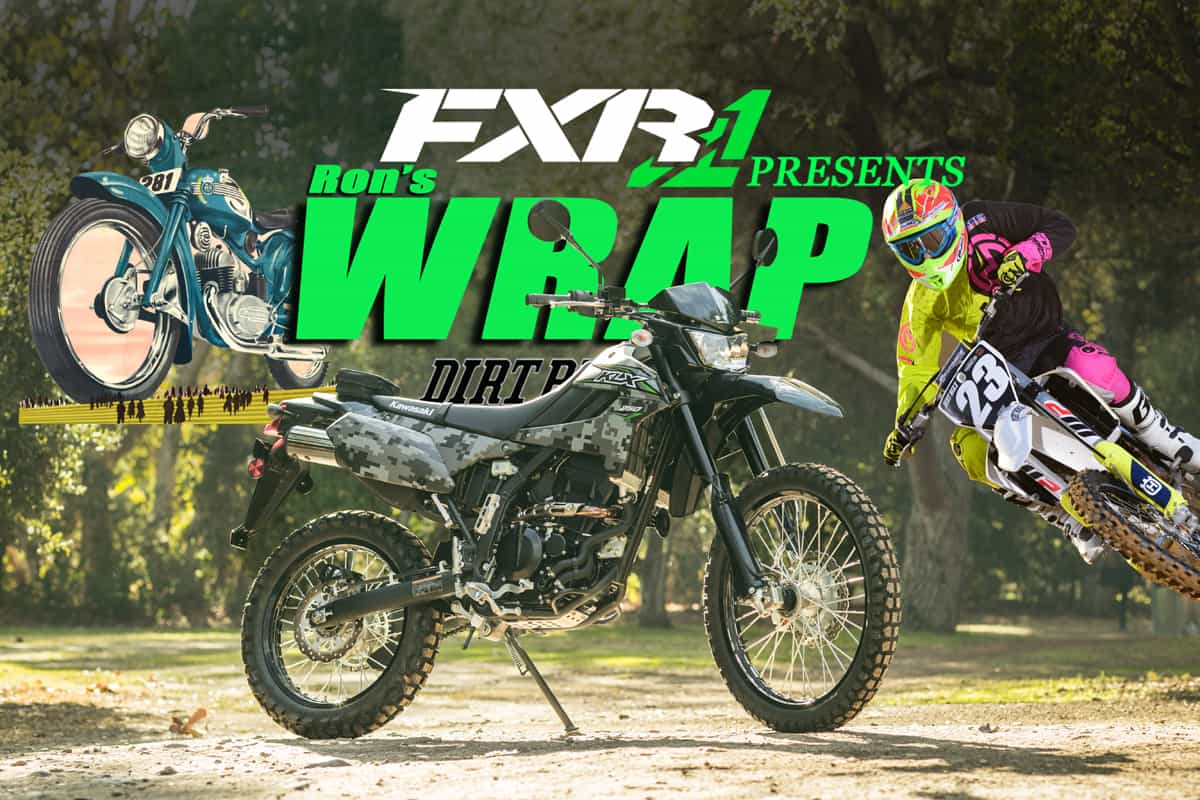 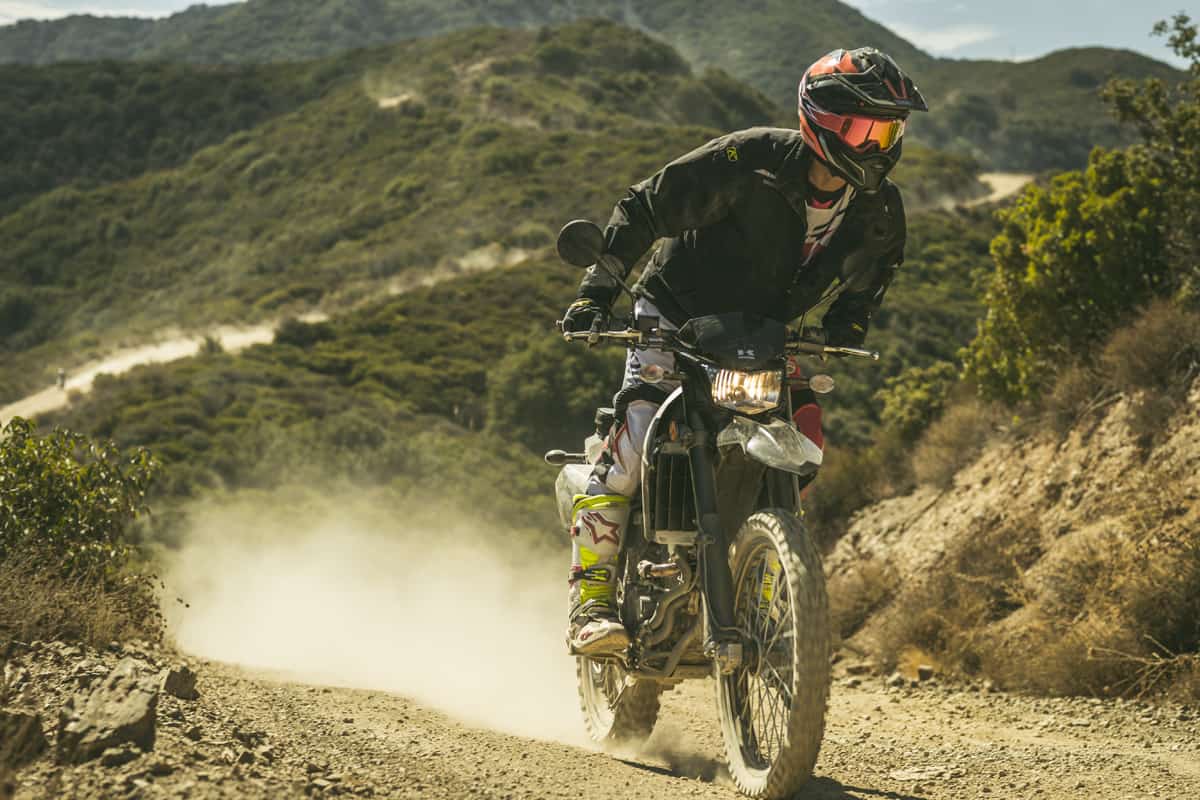 Kawasaki launched its newest dual-sport bike this week with a ride through the coastal mountains of Southern California. The bike is the KLX250, which most of us remember from the past. The new version is fuel injected and clearly aimed at the suddenly active small-displacement dual-sport market. Honda has had great success with the CRF250L in recent years. Someone at Kawasaki probably noticed that they had a bike right in the back room that could compare quite well with the Honda. 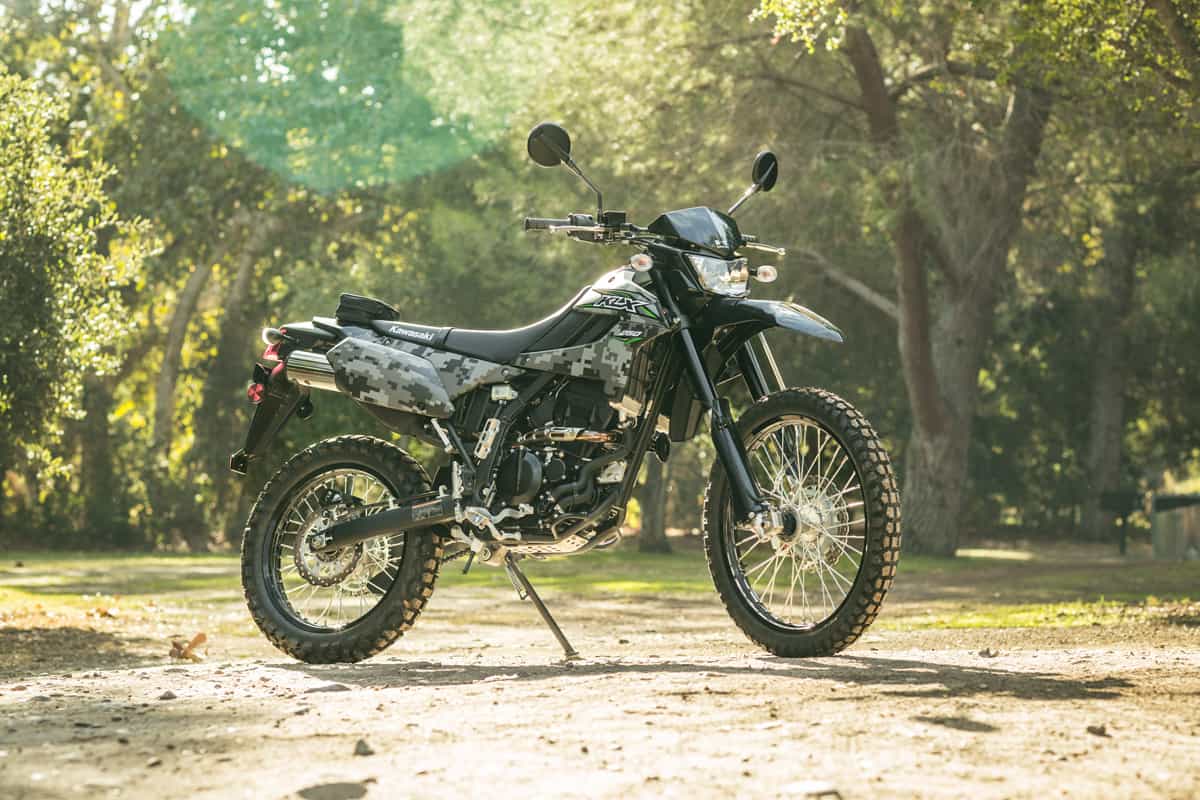 If you’ve been around for a while, you remember where this bike started. Back before four-strokes were mainstream in the dirt, Kawasaki always dabbled with off-road thumpers. The KLX250 arrived around 1994 and was followed by the KLX300 in 1997. The 300 had more displacement, a larger tank and a few other upgrades. The bike had occasional off-road racing success with riders like Larry Roeseler, but  the model was mostly considered a play bike. The street-legal, 250cc version came in 2006 with electric start, and by 2008, the dirt-only version was dropped. The dual-sport bike was available until 2014, when emission rules made it clear that carbureted bikes would have to go away. 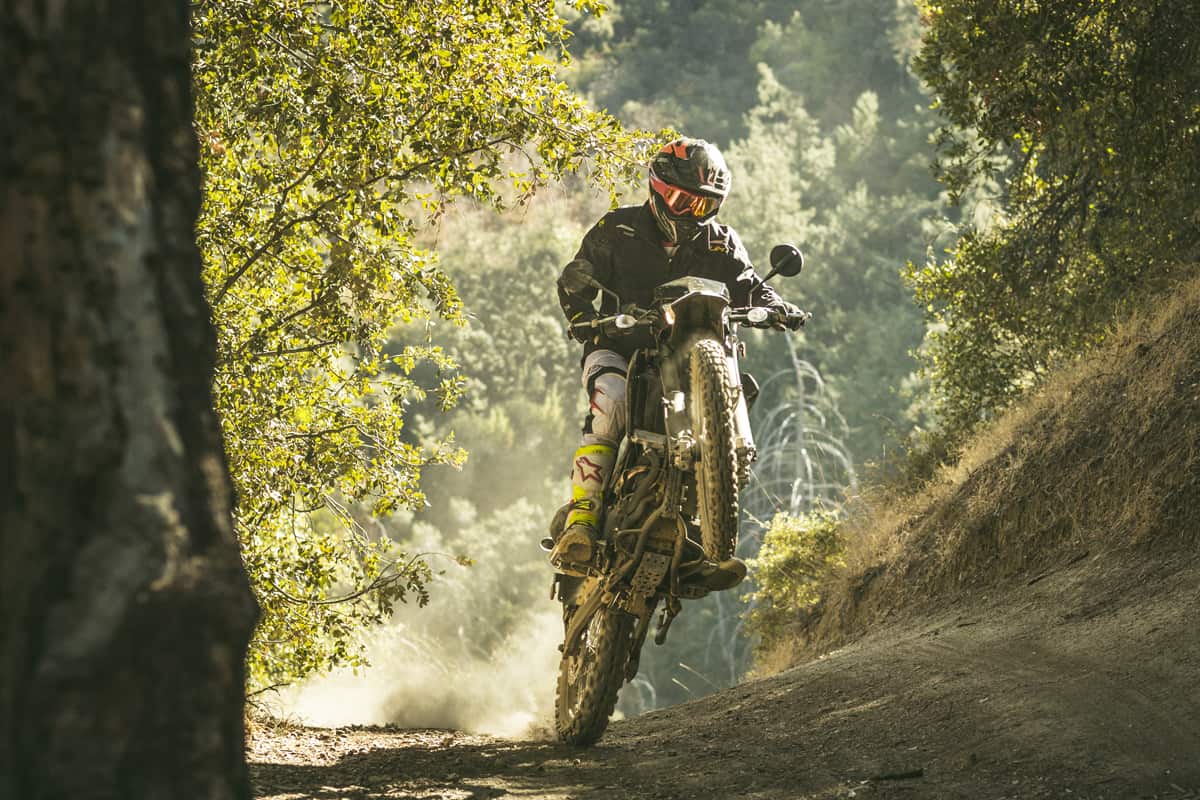 Now the KLX has returned with fuel-injection. The main point to the bike is the price. It’s $5349 for the standard green one and $5549 for the Matrix Camo Edition, shown here. That falls right in line with the Honda, which sells for $5149. Both are manufactured in Southeast Asia rather than Japan to keep price low. It’s interesting to note that the KLX was once made in Japan and that the quality is identical no matter where it originated. Yamaha is in this market, too, with two different models. The WR250R is Japanese-made and priced at $6649. To compete more directly with the Kawasaki and Honda, Yamaha revived the air-cooled, two-valve XT250 and put the price at $5149. Technologically, the Kawasaki is miles ahead of the XT. Back in 1994, the liquid-cooled, DOHC motor was as advanced as any four-stroke on the market. By today’s standards, it can’t compete with a bike like the KTM 250EXC. That machine is the state of the art in small-bore dual-sport bikes and the price reflects it–somewhere in the $9400 range. The Kawasaki can’t offer that level of performance, but it’s a step above the Honda in many ways. The brakes and suspension on the Kawasaki are surprisingly good. In terms of power, the KLX isn’t anything special. It can keep up with freeway traffic and climb mild hills. Off-road, it’s soft and heavy. There will be some riders who try to improve the KLX’s off-road ability with better tires and suspension mods. It’s certainly possible, and there’s a wealth of hop-up information out there (much more than the other Japanese bikes in this class). But at the end of the day, it’s still a bike from the ’90s that was brought back for its price. Spending too much money would defeat the whole notion. 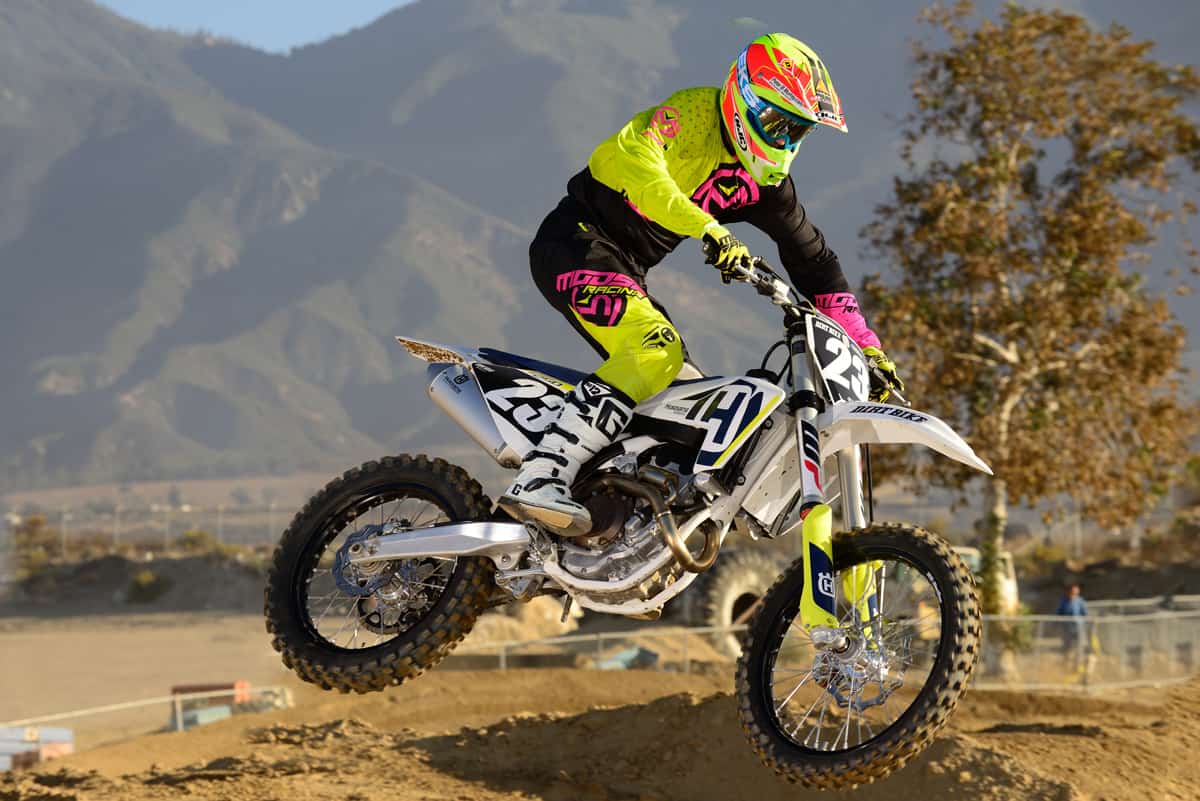 As we gear up for our 2018 250MX shootout, we’re gathering the 250s that we haven’t yet tested. One is the Husqvarna FC250. This week we rode it for the first time, and came away as happy as ever. The 2018 model is mostly unchanged, and the bike finished last year’s shootout in a virtual tie with the KTM for first place. 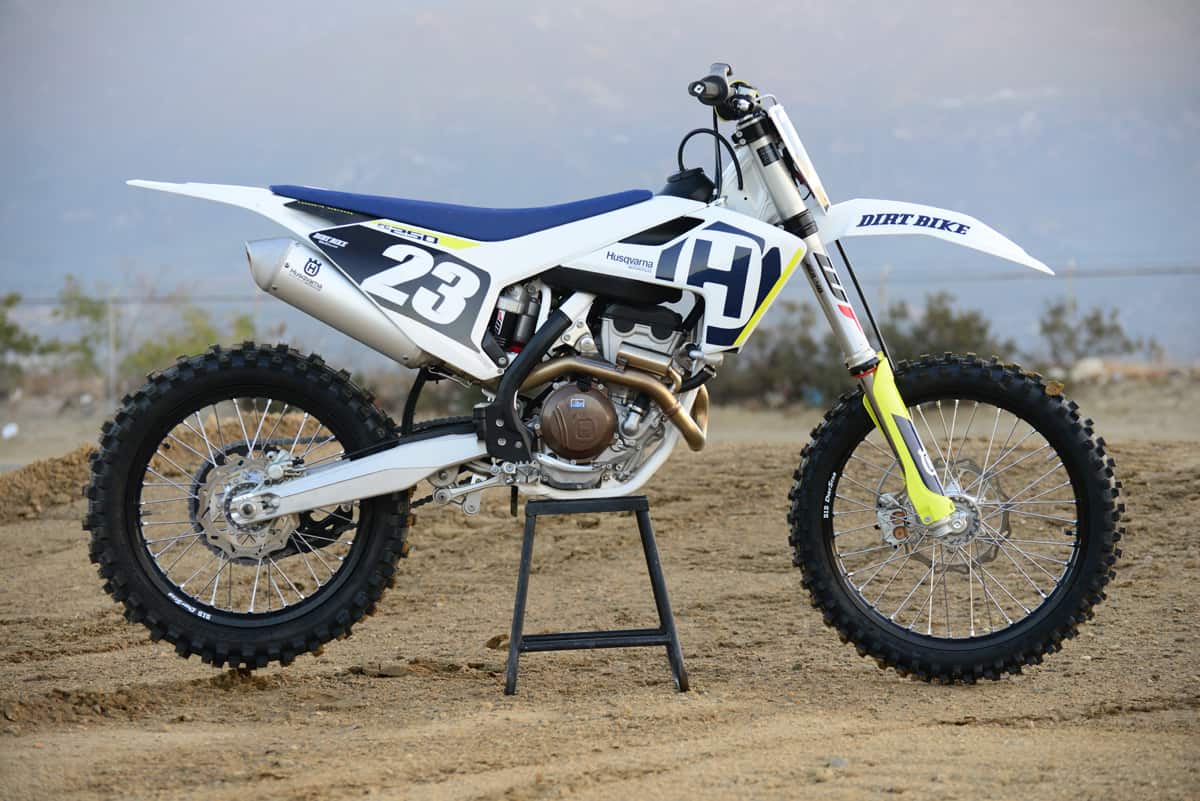 Husqvarna is often called out for being too similar to KTM. For some models, it’s not a valid criticism. In this case, the Husky FC250 and the KTM 250SX-F are genuinely difficult to tell apart from a test rider’s standpoint. The Husky’s intake is different, giving the FC a slightly different sound and power delivery. The seat, bodywork and the clutch master cylinder are different, but not really better or worse. In terms of on-the-track performance, the Husky is fast and aggressive. It’s a top-end bike, making a lot of power near the 14,000 redline, and not much down low. That’s makes pros love it. Once you get used to screaming the bike, the power is a huge advantage. 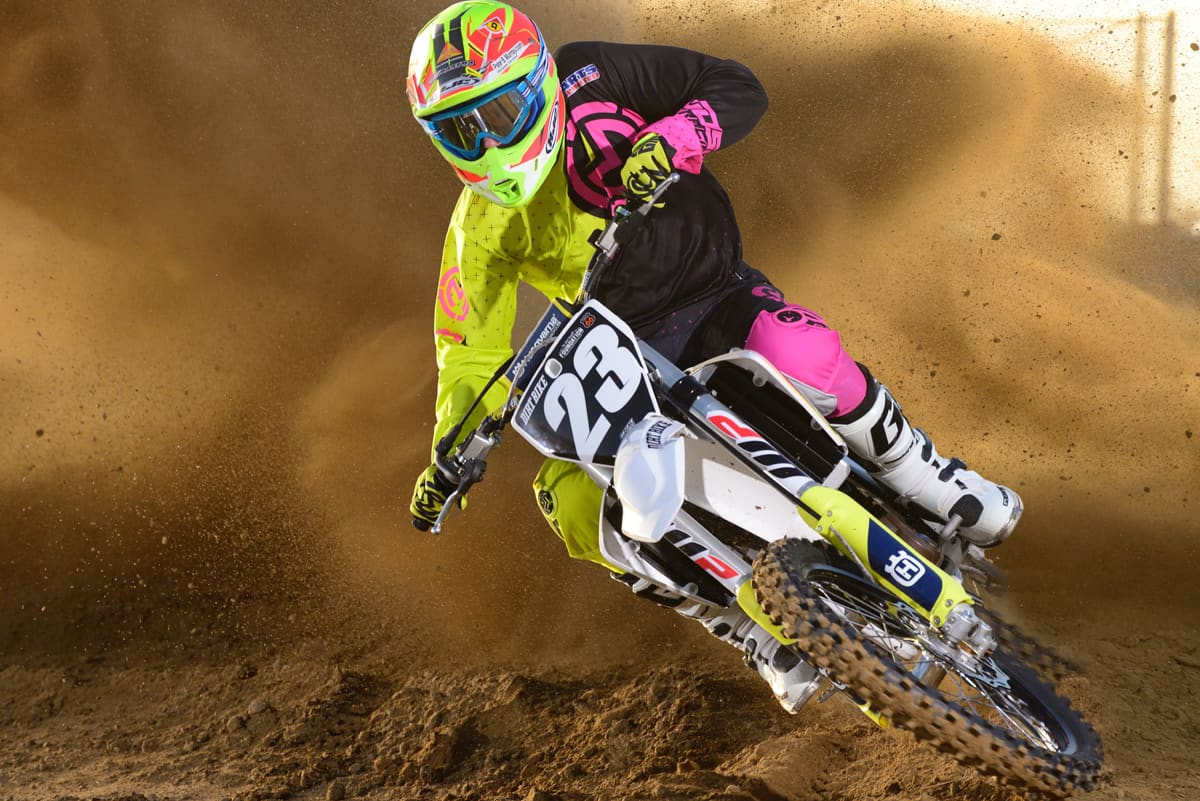 It’s also very light. The Husky FC250F is 219 points without fuel. It’s about a half-pound heavier than the KTM, but a few pounds lighter than the Kawasaki, Yamaha and Suzuki. We haven’t weighed the new Honda yet, but no one has promised that it will be light. That’s the bike that will shake up everything in this class. We already know that the Husky is as good as anything else in the class, but how will it stack up to the new Honda? Stay tuned.

About once a month, Kenneth Olausson sends us a very cool old story about the early days of Husqvarna. Husky is the oldest motorcycle brand still in production and hasn’t missed a model year for over 100 years, so there’s a lot of backstory there. This month’s edition is about the first Husky 175 and a real adventure ride in the ’50s. 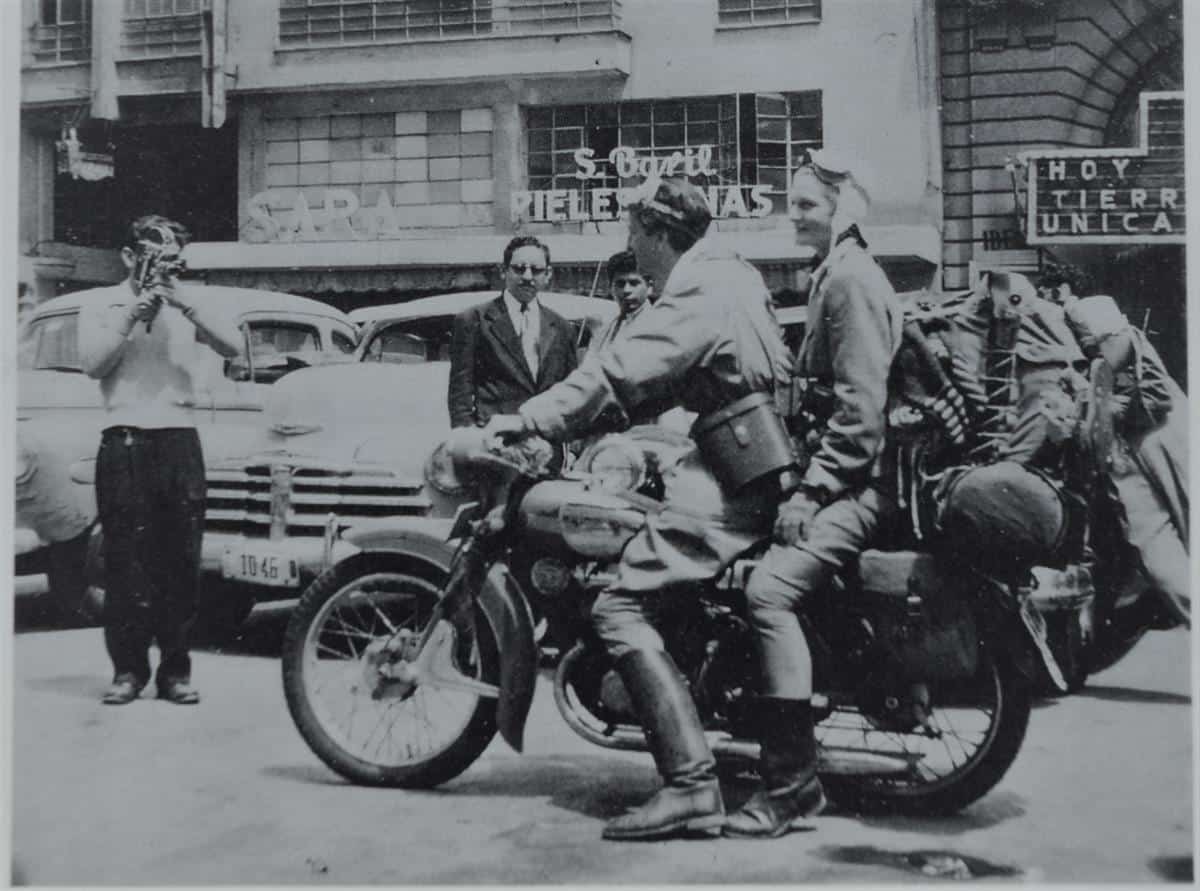 At the beginning of the 1950s people were still rebuilding after the second world war. Most had their thoughts on productivity and looking for an improved standard of living. There were exceptions however – some people were striving for something to happen. A Swedish military lieutenant by the name of Kaj Wessberg, and his wife Mary, set off on an American adventure in the summer of 1954. They travelled 2’000 kilometres through 10 countries on their Husqvarna ‘Dream Machine’. But let’s start from the beginning…

Being adventurers, the married couple were keen to broaden their horizons. They wanted to experience more and set their sights on North and South America as their dream goal – but how would they fulfil this unusual idea? It would take more than a holiday to conquer these vast continents and the two were aware of the transport problems. How would they move around freely and cover long distances without delay, and how about the risks and obstacles the couple would encounter on their trip? Kaj and Mary were used to their home in Smaland – a southern county of Sweden – where they lived a safe and uneventful life together, with high living standards. 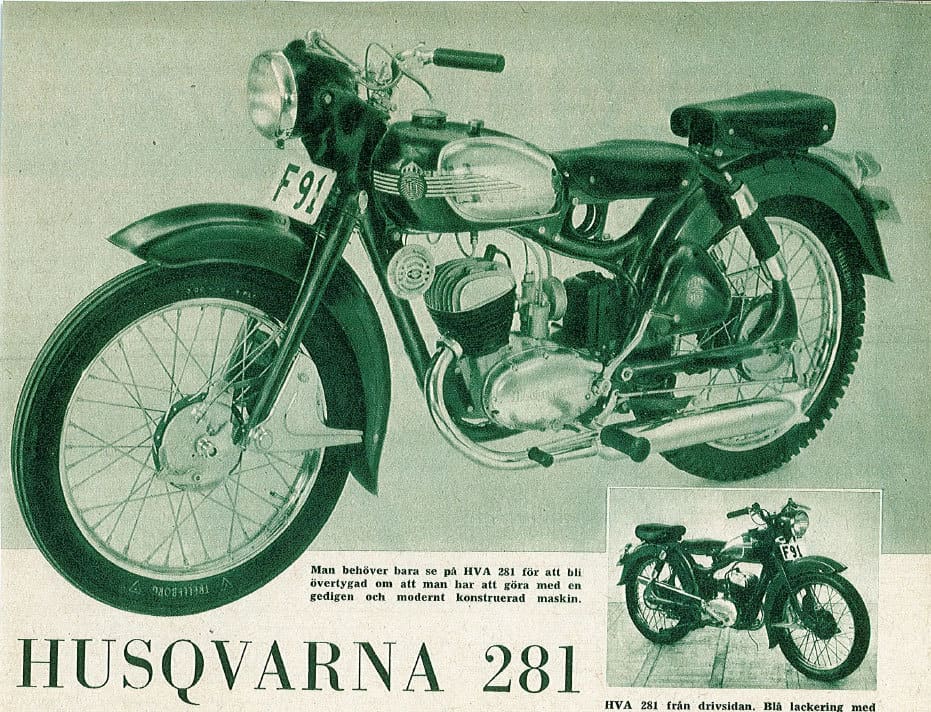 The answer came from unexpected help. Kaj Wessberg had good contacts with Husqvarna and mentioned his plans to the directors at the factory. They showed interest in this adventure and offered to provide the couple with a motorcycle, should they prefer to go on two wheels. The offer was of course tempting and also economical as the factory support would lower the cost for their journey substantially. 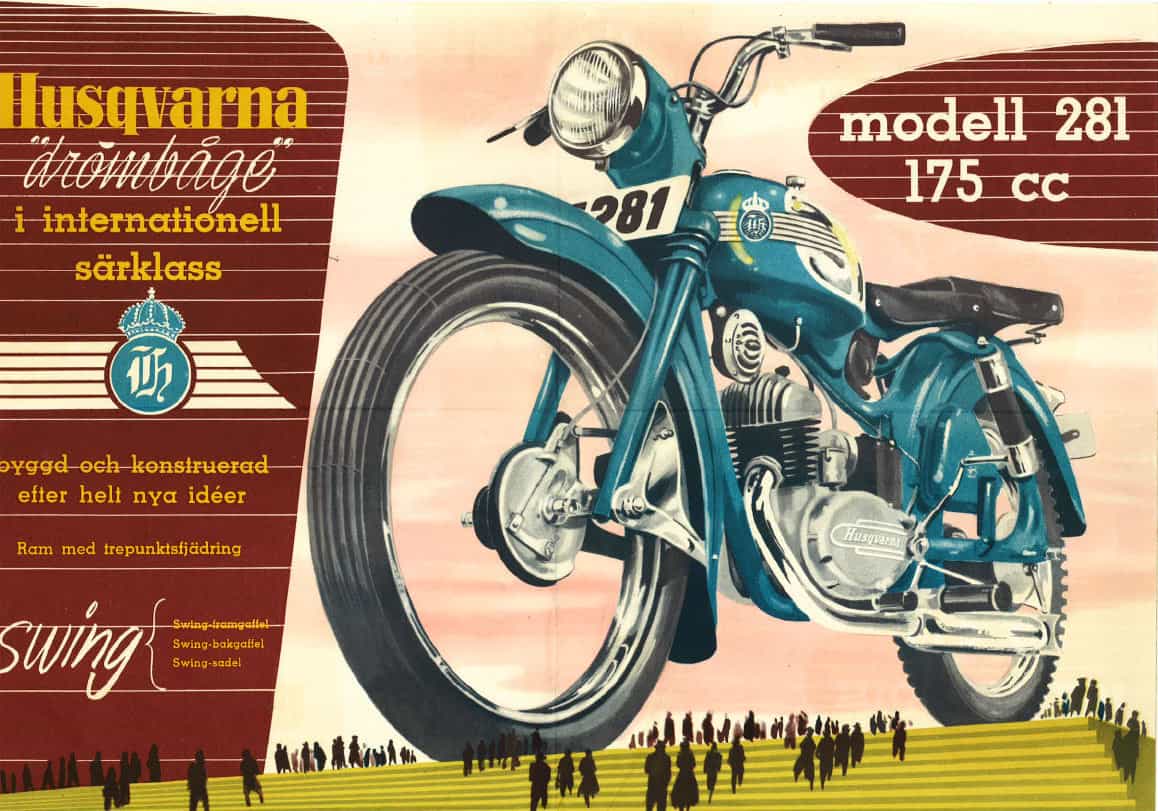 The bike would be delivered to the port of New York free of charge, but should in turn be given back to Husqvarna for publicity reasons. An opportunity like this was most exclusive and would provide good advertising material for the factory, who were trying to strengthen their market share. In the beginning of the 1950s, Husqvarna had more than one Swedish competitor on the market and also faced opponents from overseas manufacturers.

The motorcycle at hand during this after-war period was the ‘Dream Machine’, with the internal code Type 281. The colourful ‘Drombagen’ (the domestic name) was a totally new model and had only a little carry-over from the previous Black and Red-Qvarna 118cc models. The Dream Machine had a brand new 175cc engine, which was designed by Olle Edlund. He developed a reliable and robust power source that would turn out to be unbreakable. The power package had a performance of seven-and-a-half HP at 5,000 rpm and would last a lifelong period. 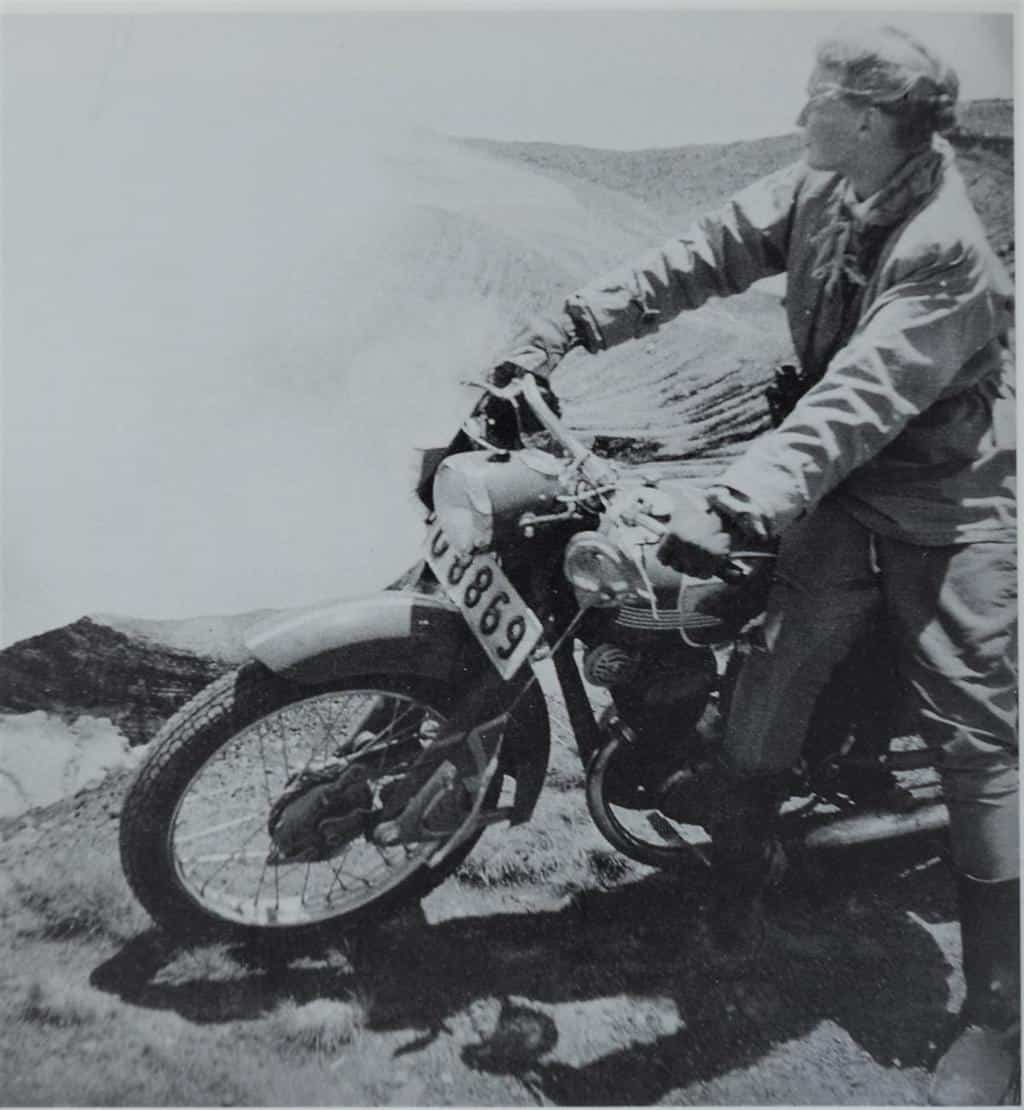 In the 1950s the big four-stroke singles dominated the market, but this was a two-stroke engine, evolved with a small displacement capacity. The motorcycle gave young people an affordable alternative and the bike proved to be successful. The Dream Machine weighed in at 100 kilos, and was capable of running at a top speed of 100 km/h. It was introduced in 1953 after the prototype had been shown a year earlier. Sales started in the spring of 1953 and it cost approximately 2,000 Swedish Kronor at the time (around 400 USD). The production lasted over six years, during which time Husqvarna managed to wring out more than 6,000 units. 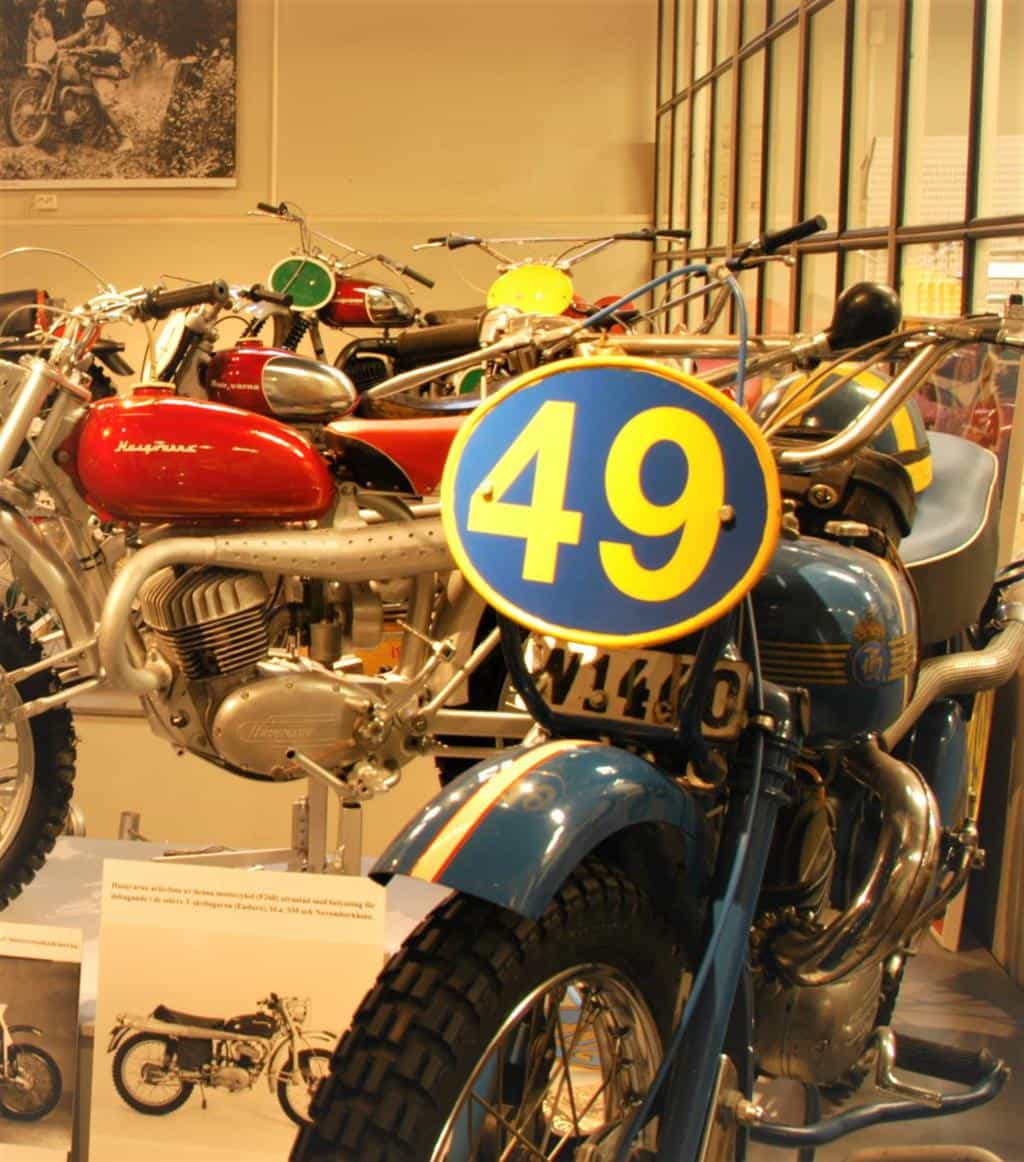 There were actually two models of the Dream Machine – the Tourist model and a Sport version with dual exhausts and more power. Both were supplied with a three-speed gearbox. However, it was the Tourist model that appealed to the Wessberg couple and it was decided that this machine would serve as transport for the adventure. Details of their Dream Machine included a tubular and stamped-steel frame, advanced front forks with leading link together with rubber links, while the rear suspension consisted of tubular shock absorbers including coil springs and rubber cover for safety. A streamlined headlight and two stylish side-covers completed the design, which made it look modern. This motorcycle was the image of European styling.

BLAST FROM THE PAST: BROC GLOVER- 1978; A PHOTO MODEL FOR DIRT BIKE!