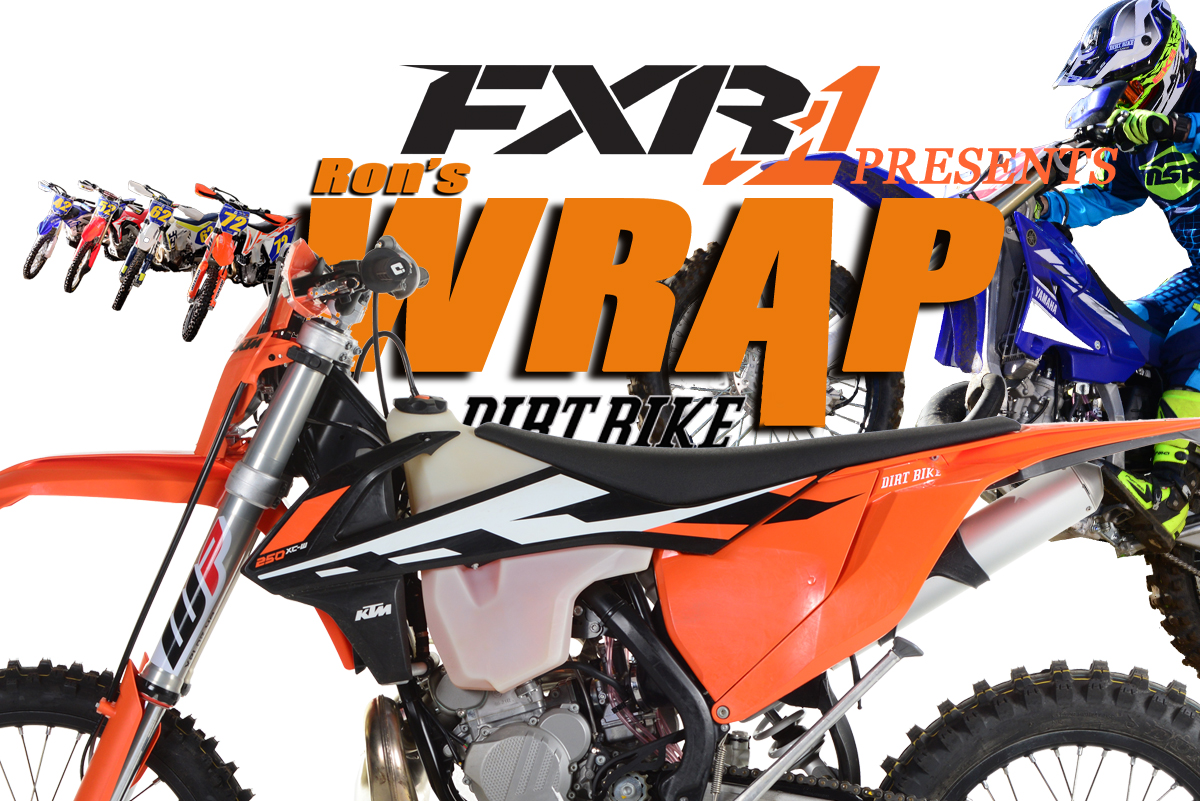 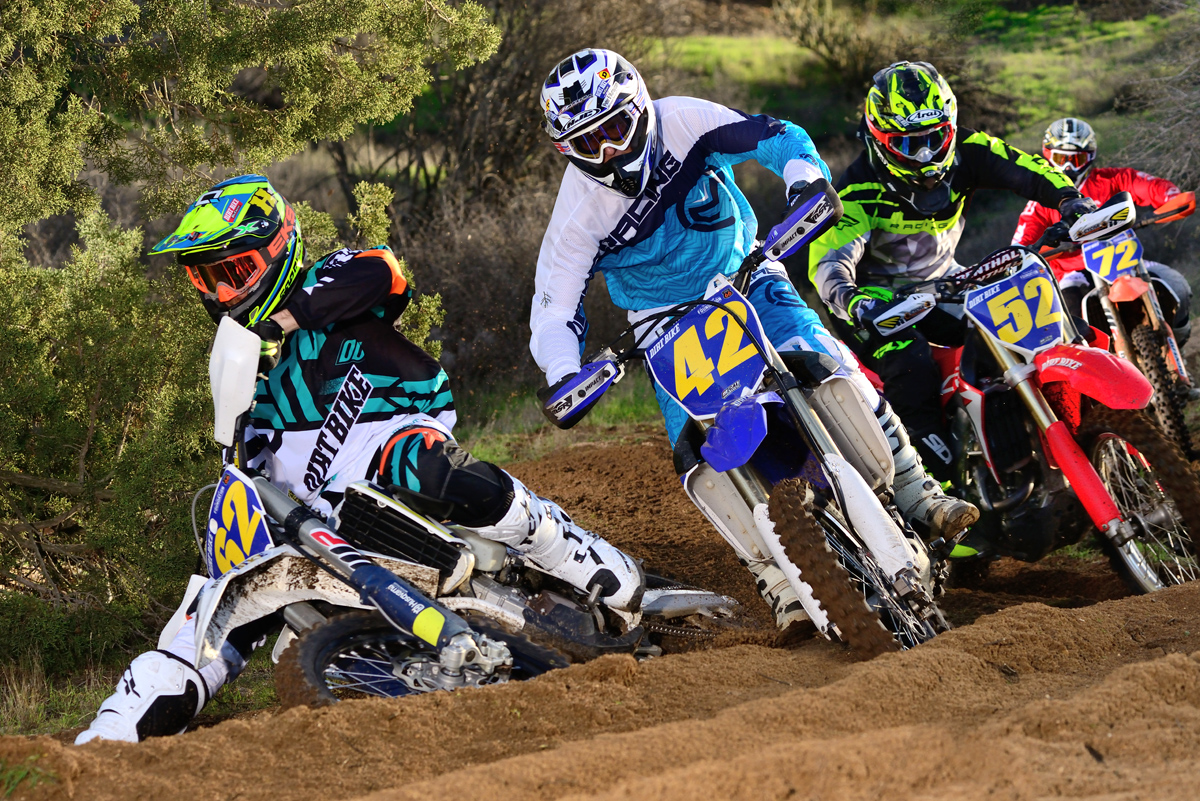 We have a glut of off-road testing to do in the next few weeks, but there’s no better time for it. It’s been raining off and on for weeks in So Cal, and that means the dirt is heaven. First on the list is a comparison between the Honda CRF450RX, KTM 450XC, Husky FX450 and the Yamaha YZ450FX. All are closed-course competition bikes, which is a vague mission. They’re designed to deal with trails as well as tracks, so we will be breaking the test into two segments. The trail section will consist of tight single track, and the bikes will be ranked accordingly. Then there will be a GP test, which means the bikes will be ridden on extended MX tracks, much like the WORCS and Big 6 venues. Again, the bikes will be ranked independently for that. There will be an overall winner too, but it will probably be a compromise. 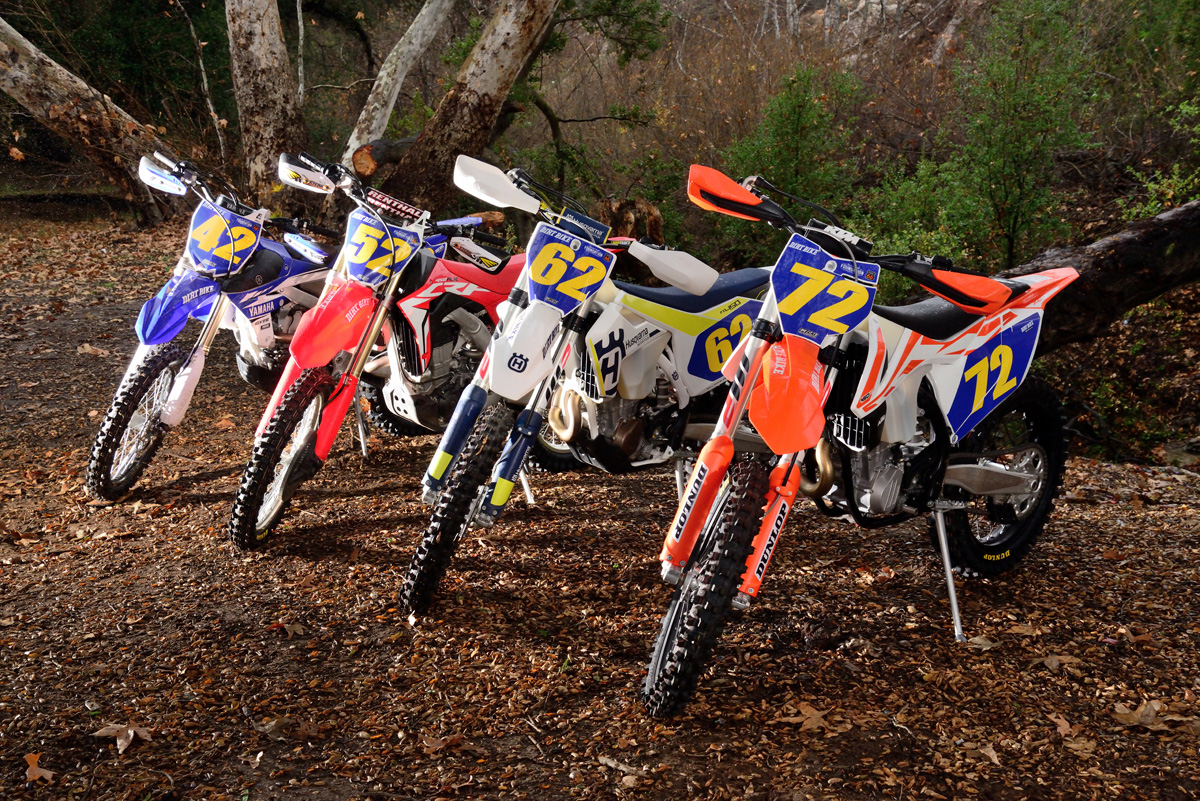 Each bike has strengths and shortcomings. The Yamaha has a dedicated off-road gearbox, with a low first gear that gives it an advantage on tight trails. The other three have the same gearboxes as their MX counterparts. The Honda, KTM and Husky all have gas tanks that are larger than the MX versions, although they aren’t that much larger. The Yamaha has the same two-gallon tank as the YZ450F. And of course, the KTM and Husky have a big weight advantage. 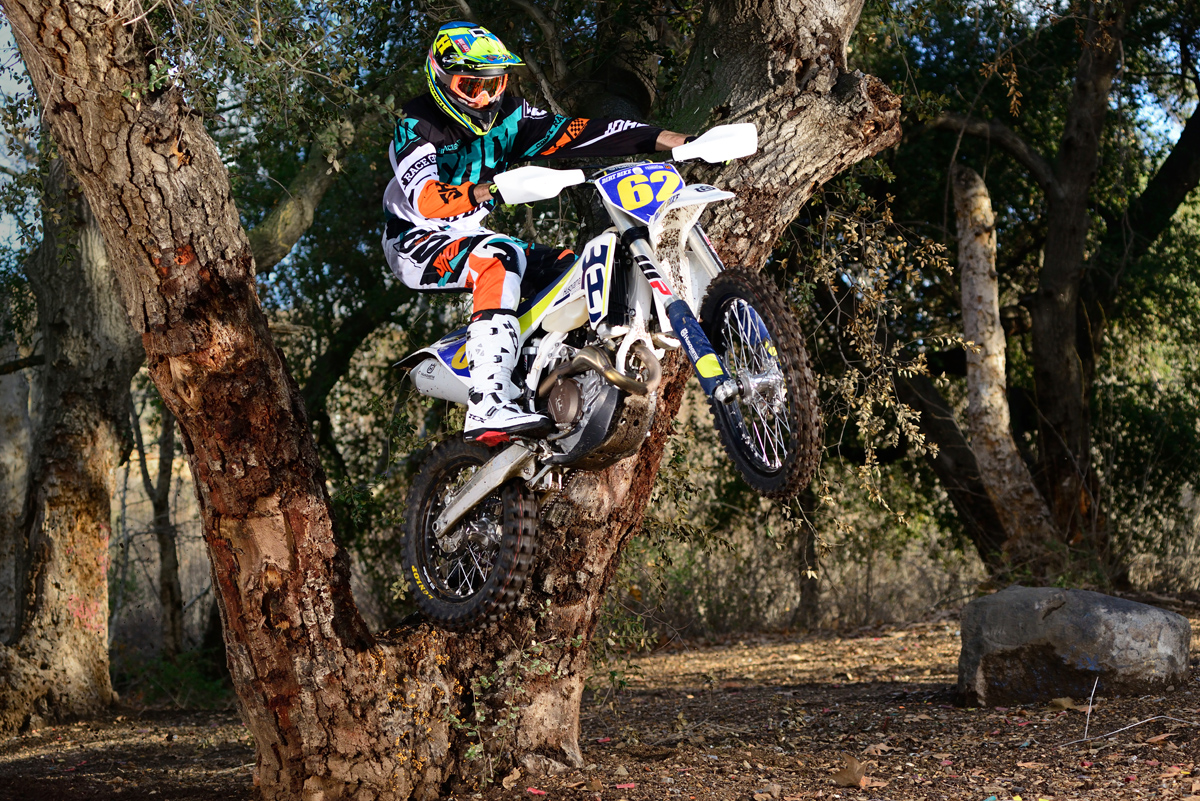 I have a lot of help. Pete Murray, Justin Jones and Mark Tilley have been fun to ride with. Justin has some pretty creative ideas for photos, too. “What if I jump through the middle of that tree?” Okay. Sounds good to me. 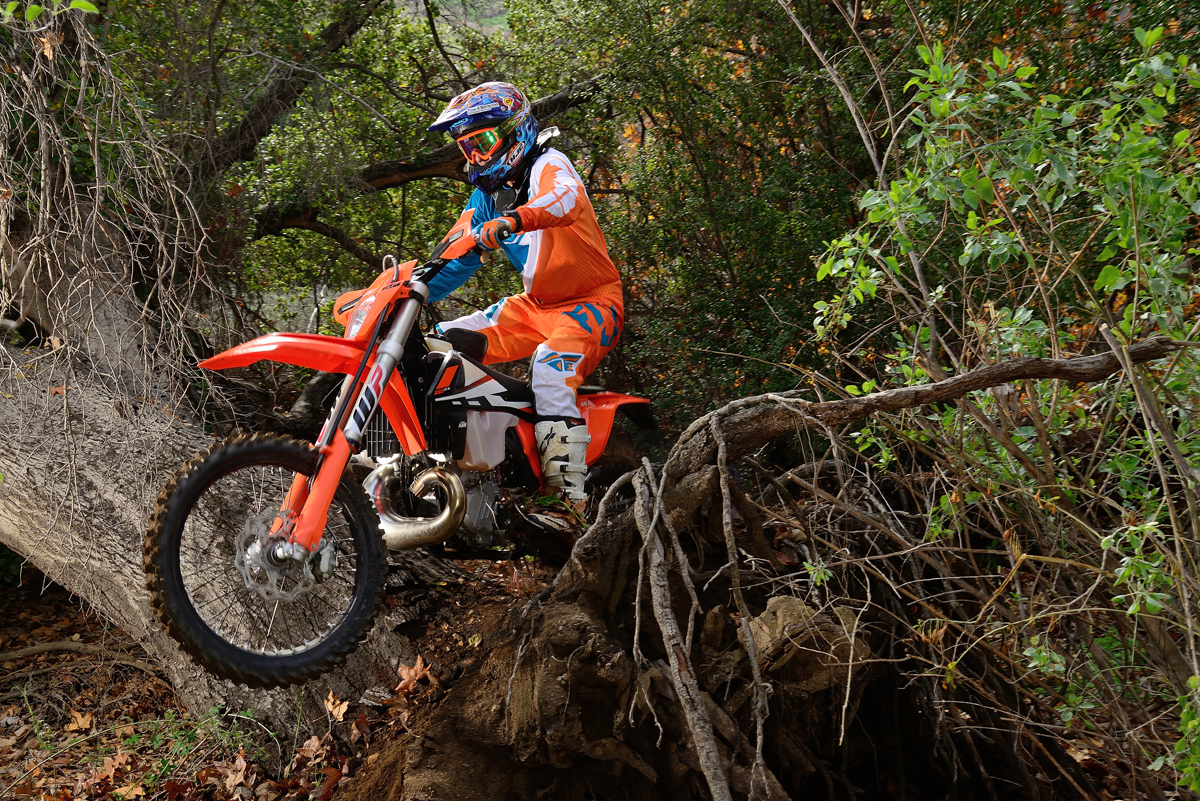 As much fun as we’ve been having with the 450s, they don’t hold a candle to the KTM 250XC-W. This has to be one of the greatest bikes on earth. In the past, I’ve fallen in love with Austrian 300s on a regular basis, and this year I became a big fan of the KTM 150XC-W. But of all the off-road two-strokes I’ve ridden so far, the 250XC-W has the best manners. The others have slight jetting issues, and the 250 is clean and sweet. 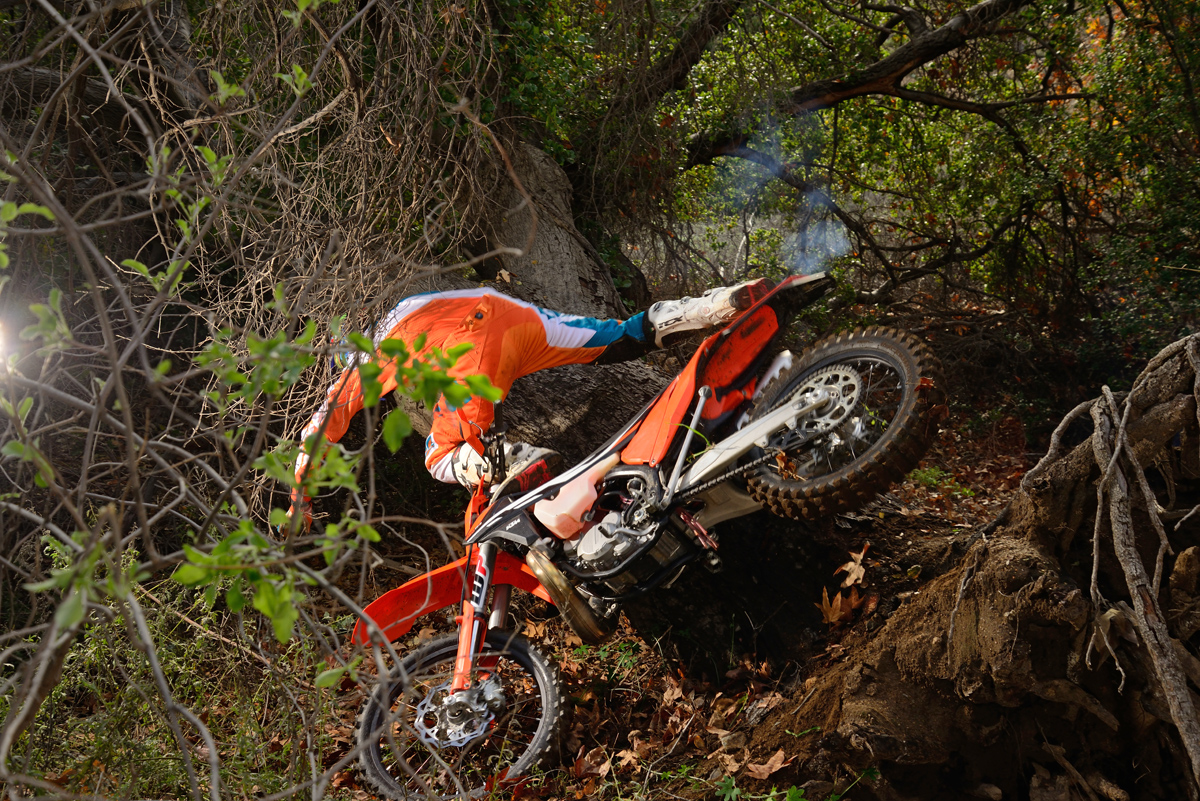 We love the 250 so much that we tend to get carried away with the dumb things we do. This gigantic tree fell across one of our secret trails, and Mark Tilley thought it would make a great photo–but with Pete riding the bike. Actually it did make a good shot. Once. On the second try, the results weren’t as good. 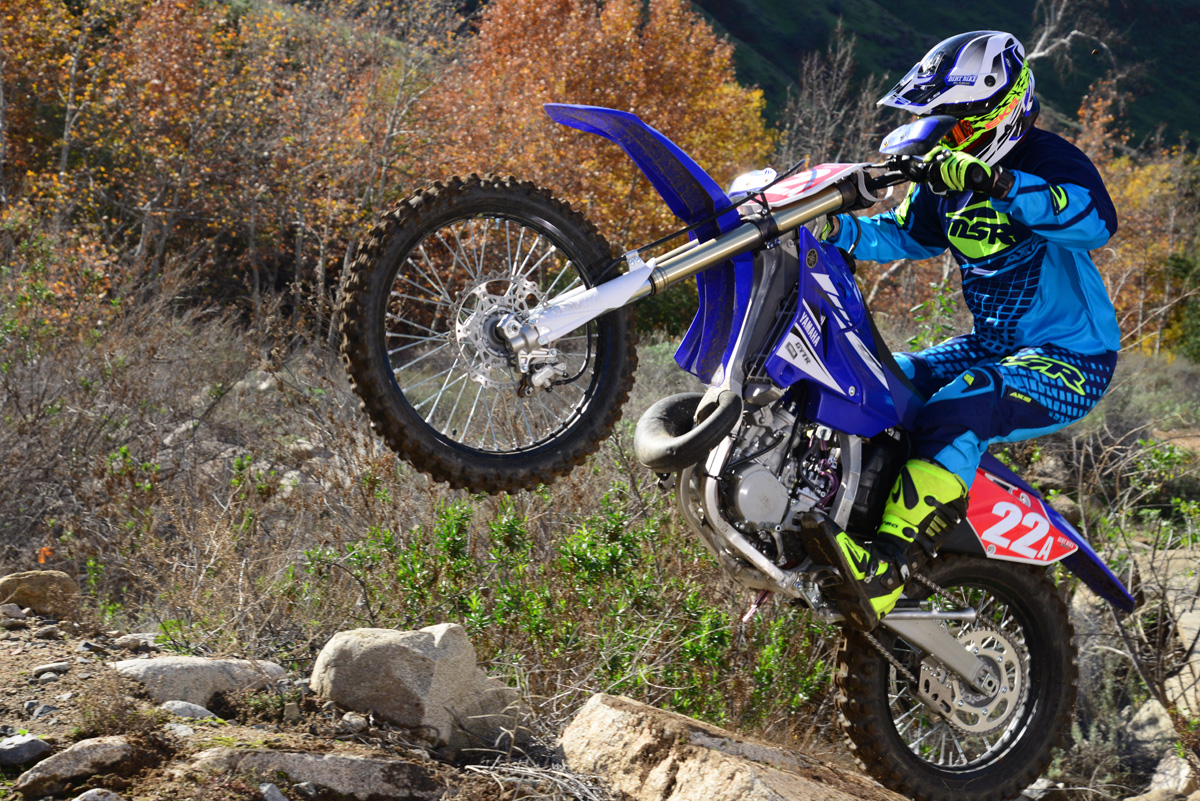 Last year we did a comparison between the Yamaha YZ250X and the KTM 250XC. Much to our surprise, the Yamaha came out on top. It had a much cleaner power delivery and better suspension than the KTM of the time. The KTM’s electric starter was nice, but you only appreciate that a few times each ride, while the suspension and power are always there. This year we might get a rematch. The KTM two-strokes are all new with better suspension, and the Yamaha isn’t. We’re not sure which KTM is a better match against the Yamaha, though: the 250XC or the 250XC-W?

The first Big 6 GP of the year starts today. SoCal MC puts together the Adelanto GP, and if you haven’t been to this event since its rebirth, you need to know it’s completely different from the race that the Desert Vipers put on in the old days. It runs in a flat area between highway 395 and the 15 Freeway, but the club makes the most of the terrain. The entire course in prepped, unlike the old, whooped-out, raw desert sections on the old course. Ty Davis designs an EnduroCross section inside Maverick stadium that’s usually very difficult. At least there’s a alternate route. The old water jump is still there, and just like the old days, it draws a crowd.

KTM has earned its reputation as the king of Dakar. The whole team really has its act together, and it looks like Sam Sunderland or Mattias Walkner will win this weekend when it wraps up. Both ride for the KTM team, which has a winning streak that will stand at 16 in a row. But you can’t help but feel sympathy for the Honda team. They were all handed a penalty a few days ago for refueling in the wrong place. That knocked the whole team out of the top 10. Joam Barreda and Paulo Goncalves have climbed back up the standings, and Ricky Brabec actually won a stage. Unfortuneately, Brabec’s Honda quit within a few miles of the finish on stage 10, ending his ride. The whole story and Ricky’s story will be in the print edition of Dirt Bike next month.

The 2017 Legends and Heroes tour is proud to celebrate the great heritage of families and moto with a focus on how riders – even the icons of the sport – trace their roots back to family and friends.

One such moto icon is Tommy Croft – who’s great personal racing story began with the lessons and support provided him by a loving dad, Ryle “Buzz” Croft. In Tommy’s early racing days Buzz molded him to become a responsible person as he worked alongside him at Carlsbad raceway repairing fences and maintaining the racetrack in exchange for entrance fees and race entries.

“”Buzz” Croft was the man that we all looked for at the finish line – especially when it was a hot or rainy day at Carlsbad Raceway.” Recalls Supercross racing great Marty Tripes, “He’d be there wearing his trademark white BELL hat, windbreaker and white pants with his flags in his hands. A caring and dedicated parent to the sport, Buzz’ gift to all the racers including Tommy was himself; standing there flagging, time after time, year after year. Buzz’ comfort zone was teaching us kids some responsibility and he was always there for us. His gift to the world was his son Tommy who took those early experiences on to become one of the greatest riders in American motocross and Supercross history.”

Alex Moroz General manager for the Legends and Heroes tour says, “Tommy got his first bike at the age of 12 in the 7th grade, a Hodaka Super Rat and his first race in 1970 was at Carlsbad. In just a few short years Tommy developed as a person and as a racer and he went from trading labor for track time to a Team Honda factory ride in 1975 as an 18-year-old high school senior. That same year Tommy was the 250 class runner up at the Carlsbad USGP, the 250cc runner up at the Saddleback Trans Am and 500cc class runner up at the LA Coliseum. In 1976 he scored more 500cc class Trans AM moto wins than any other every American rider.

By 1977 Croft scored victories at the St Petersburg 500cc AMA National and the 1978 Sears Point 500cc AMA National events. Tommy represented the US as a member of that year’s MX des Nations team. In 1979 he signed with Team Kawasaki and finished 3rd overall in the AMA Supercross series. Tommy also went on to win the Mickey Thompson Stadium off-road racing series with factory “Team Jeep” winning 5 championships.

Tommy Croft and his late father Ryle “Buzz” Croft will be honored Saturday during a pre-race ceremony just prior to Rd. 2 of the 2017 Monster Energy Supercross series at San Diego’s Petco Park. A Legends and Heroes special award presentation will take place trackside on the Monster Energy stage with Dunlop’s 6-time AMA champion Broc Glover presenting the award. 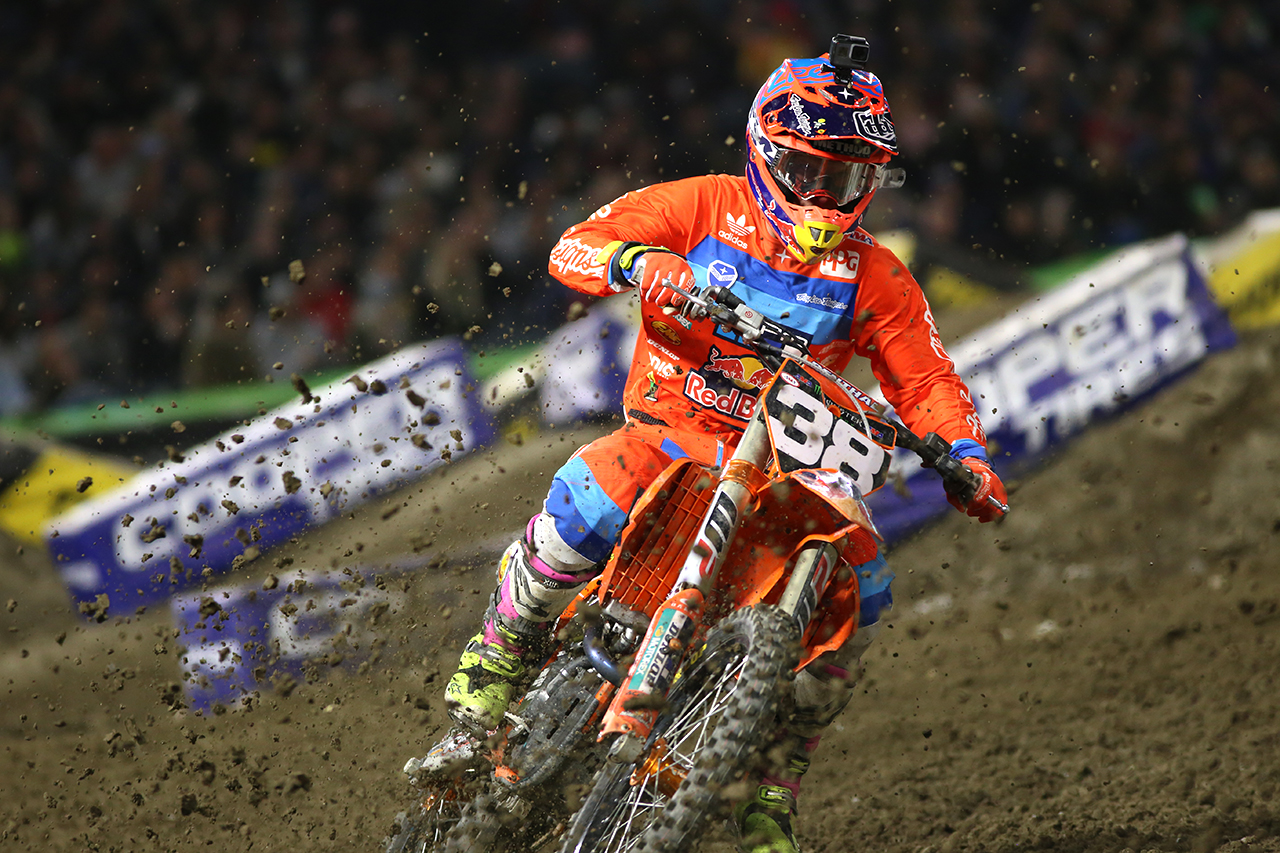 Monster Energy Supercross at San Diego is tomorrow. I’ll be at Adelanto, so I’ll miss it, but with the miracle of technology, I’ll try to watch it later. It will be impossible to not know who won. Travis Fant has been doing a spectacular job for Dirt Bike, shooting photos and posting reports. Check out the Fant Files on www.dirtbikemagazine.com before, during and after the race to find out the inside news.

Just wanted to update everyone after my crash on Saturday. I took a very hard hit to the stomach, but after being checked out by all of my doctors I am OK just really sore. As the week progresses I will make a decision on racing this weekend in San Diego. Just want to thank everyone at the alpinestars mobile medical unit for being on hand to get me safely off the track!! #alpinestarsMobilemedicalunit