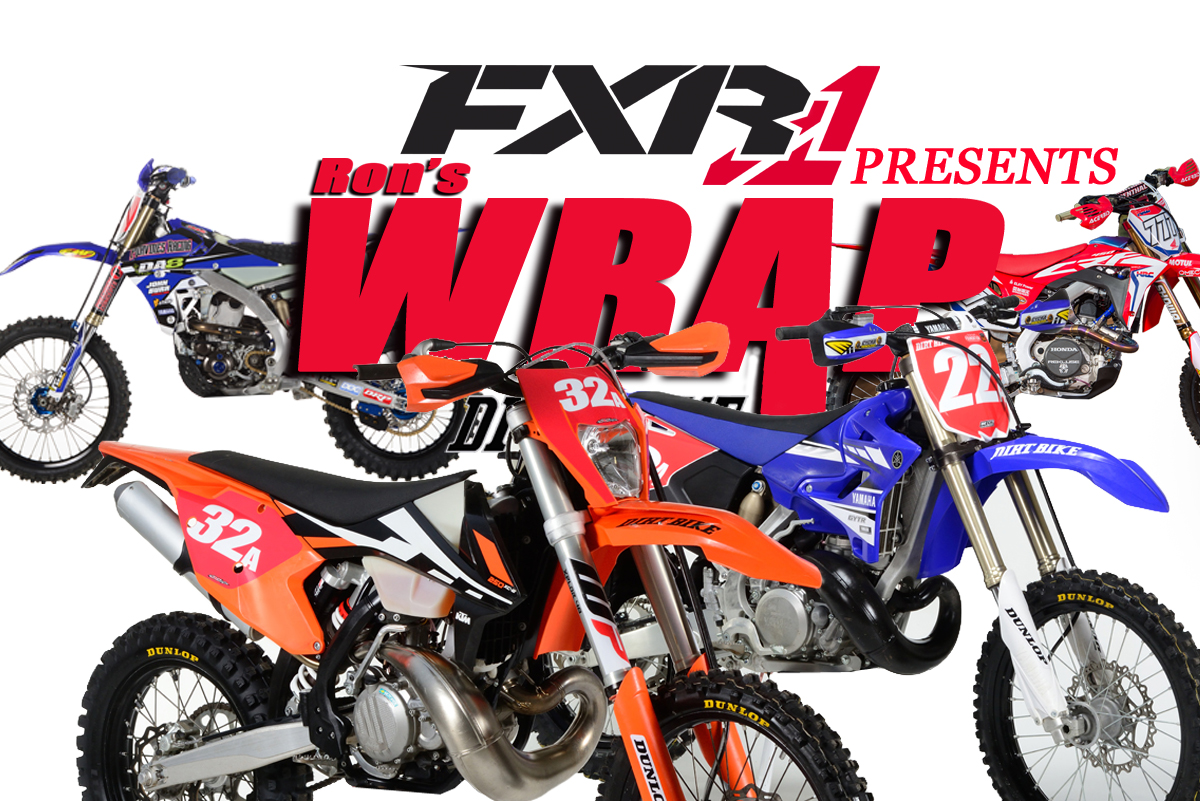 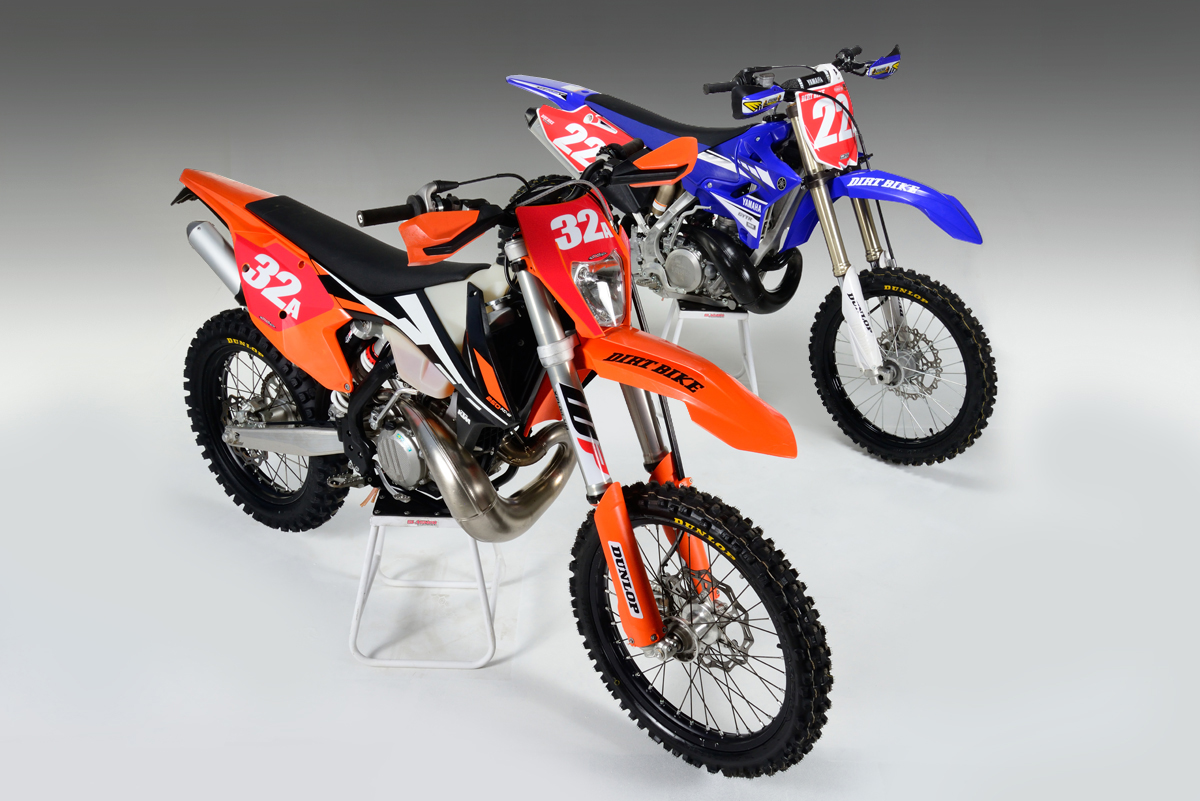 Last year  when the Yamaha YZ250X two-stroke off-road bike arrived, it was thrown directly in to a comparison with the 2016 KTM 250XC. Every test rider agreed that the YZX was a better off-road bike, despite not having electric start. That amazed us all. The Yamaha had better suspension, cleaner jetting and a smoother power delivery. The one thing that worked against the KTM was that we choose the XC for the shootout, which is half off-road/half MX. Our shootout was strictly off-road, and the KTM 250XC-W might have been a better candidate because it is more focused on trail. 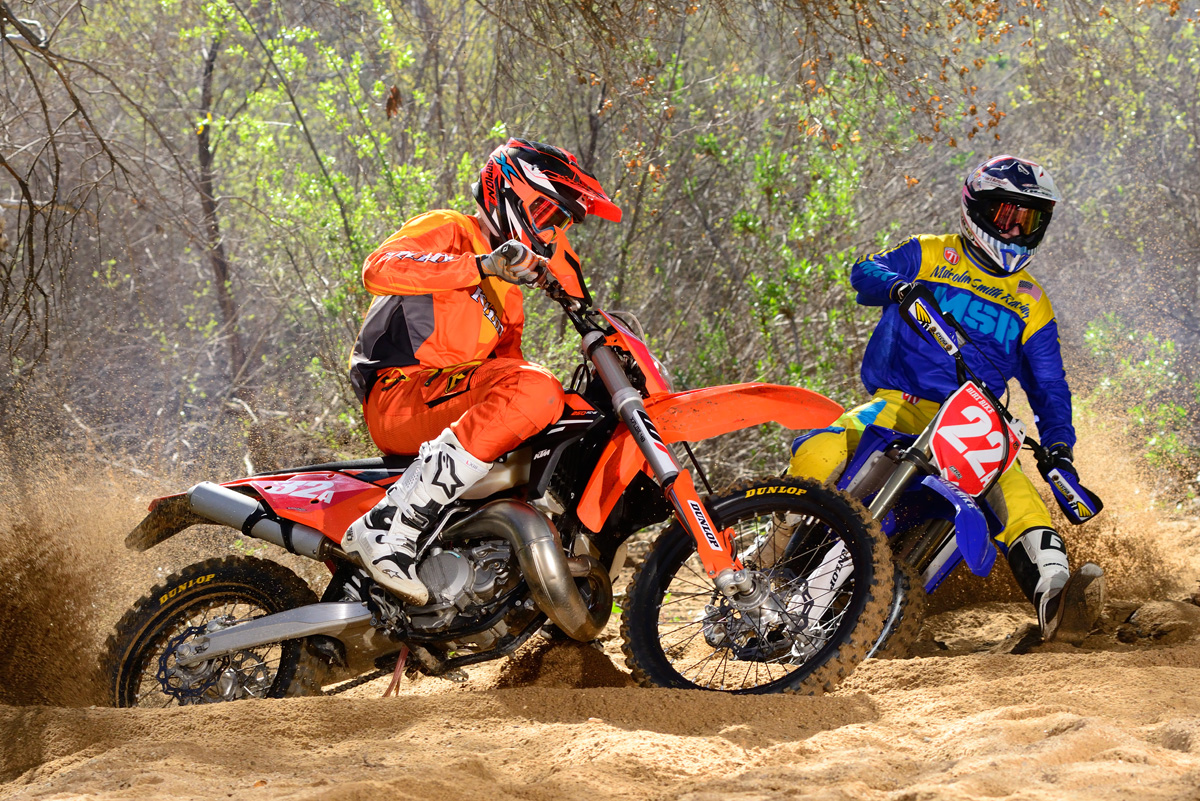 Now we’re working on the rematch and several factors have changed. First of all, KTM has a new counter-balanced motor for all its two strokes. For this round, we choose the KTM 250XC-W, which has PDS suspension, a new coil-spring fork and different gear ratios, all designed to make it more trail worthy. The YZ250X is unchanged for 2017 aside from a larger front brake rotor and black rims. 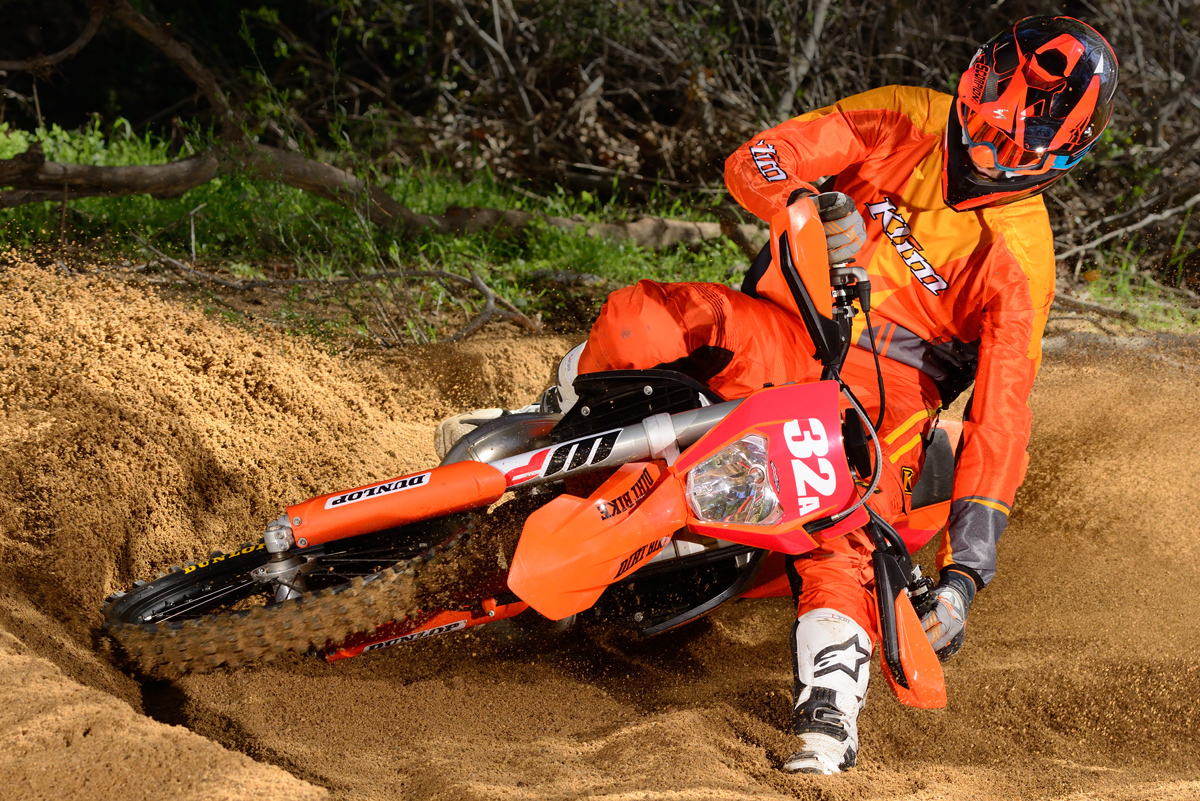 We know that there are at least three other 250 off-road bikes we could have included in this comparison, but it takes time to put together a five-bike comparison test. For now , we were anxious to see if the all-new KTM could change that balance of power. Here are some of our findings so far: 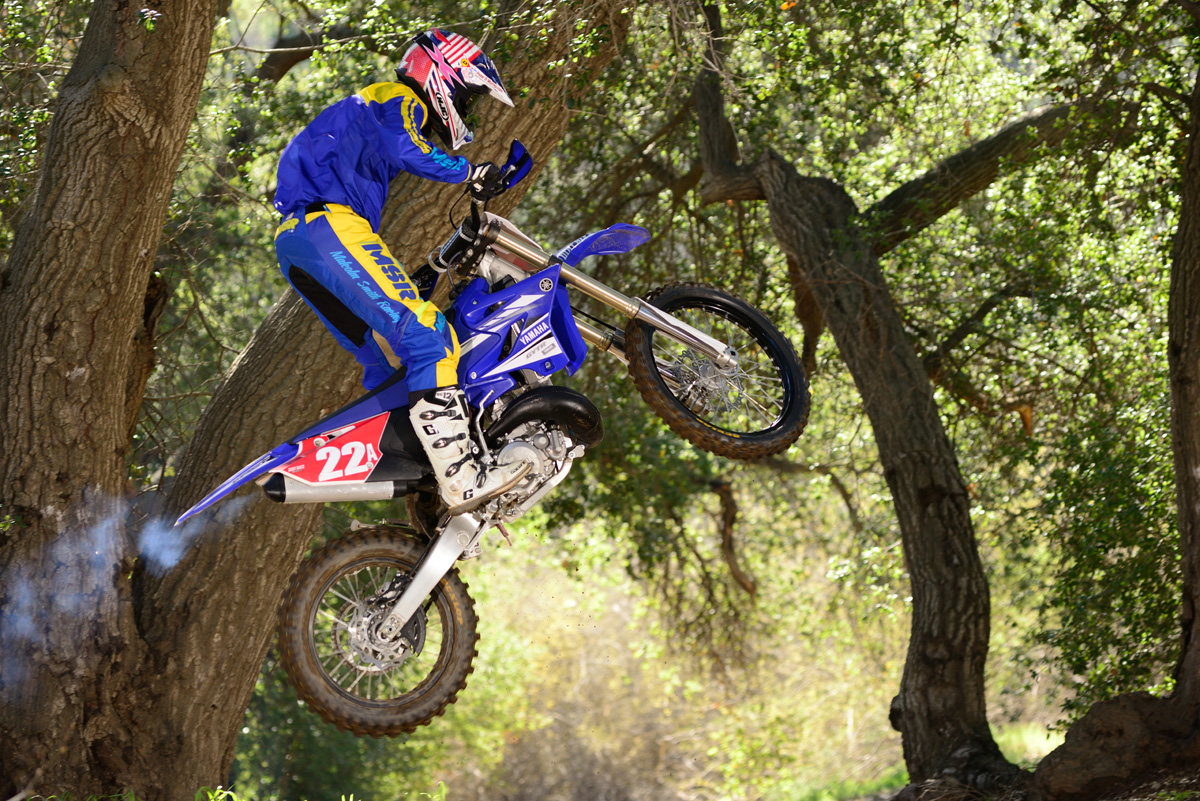 The two bikes are almost the exact same weight at 219 pounds without fuel. The first thing you notice when you ride the two is that the KTM motor is much smoother and vibrates less, presumably because of the counterbalancer. We never felt that the YZ was a vibrator until now. The balancer also gives the KTM a little more flywheel effect down low and enables you to crawl over obstacles at insanely slow speed. The KTM has more power, too. The big advantage on the Yamaha side of the ledger is still suspension. The KYB fork and shock are outstanding, and while the KTM fork is much improved, it’s still advantage YZ here. The YZ’s jetting is better, as well, at least at the temperatures and altitudes we ride. Other factors are the KTM’s bigger tank and, of course, electric start. The full test will be in the May, 2017 issue of Dirt Bike. 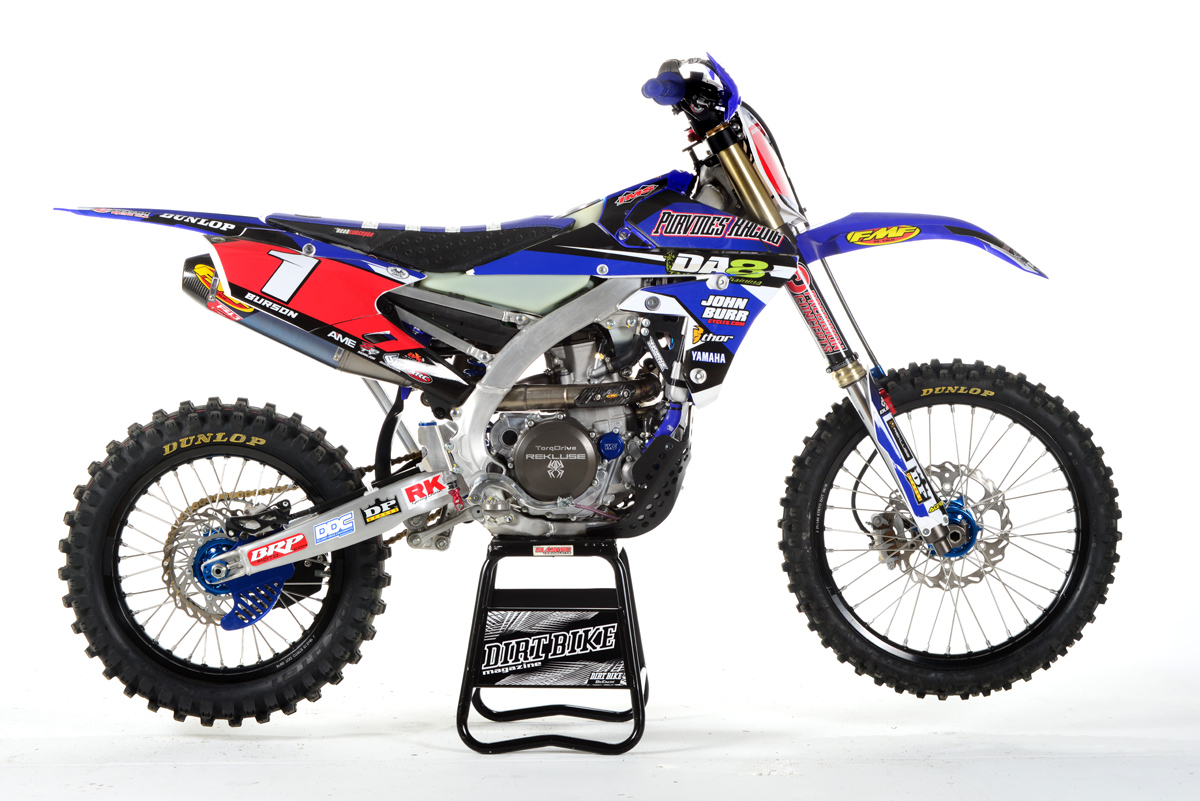 We will have a new series of stories in 2017 where we hope to ride every off-road bike with a number-one plate. Eventually, this could include bikes like Kailub Russell’s KTM 350XC-F and Ricky Brabec’s  Hare & Hound CRF450RX. For the first round, we have Nick Burson’s Yamaha YZ450FX, which carries the number one plate in the Kenda/SRT Western Hare Scrambles Championship. It’s worth noting that Nick won the titles on a Beta, but for 2017 the entire Purvines off-road team will be Yamaha mounted. 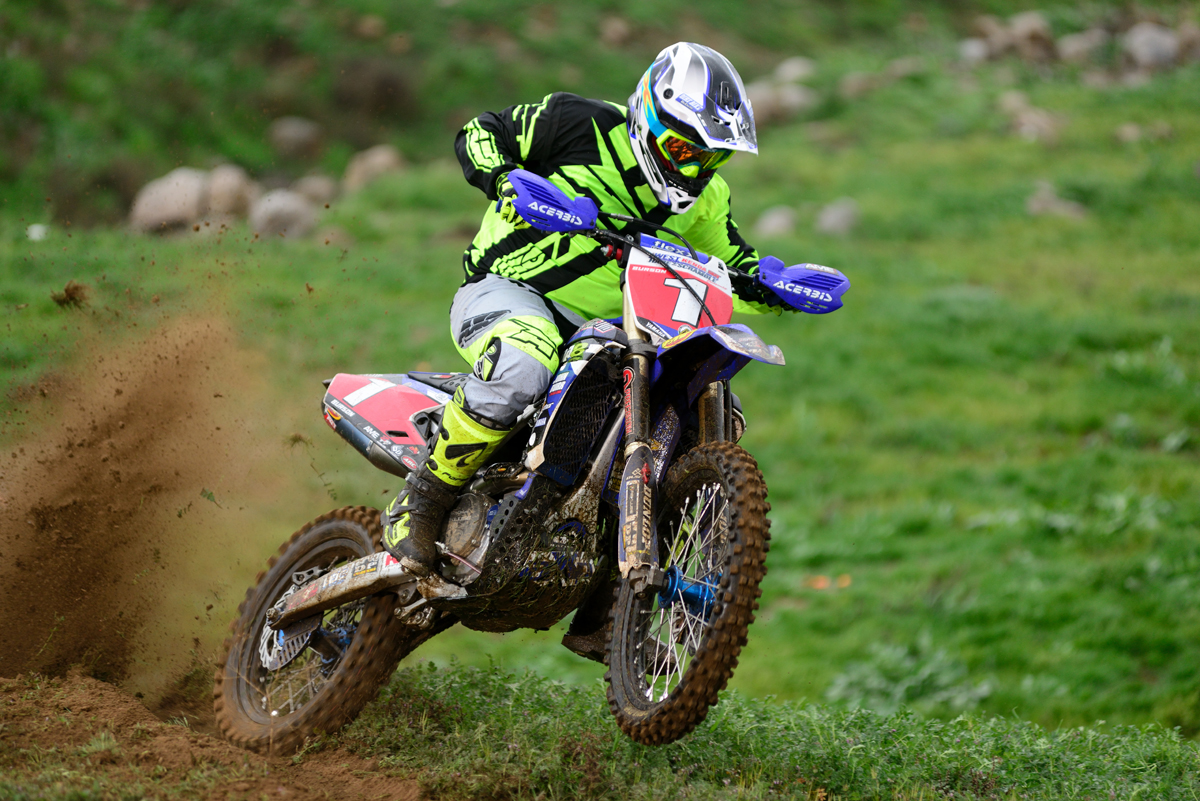 We’ve already had a chance to ride Nick’s Yamaha. The team is on a steep learning curve with new bikes, but Nick reports that he already loves the bike. We know why. It’s a mauler with outstanding suspension. It’s interesting to note that Nick also contend in the Hare & Hound series on nearly the same bike. Even his suspension will be the same. He will probably use a Yamaha YZ250FX for the tighter rounds of the Hare-Scrambles series, and has talked about even riding the YZ250X two-stroke. On the 450, he already has one win this season at the Gorman ISDE qualifier.

Cody Webb might be the best dirt bike rider in America, if not the world. We already know that no one can touch him in American extreme enduros. This year he’s been venturing deeper into more traditional off-road races, and improving with every ride. Last weekend he won the muddy hare scrambles at Clear Creek, in central California. Rain hammered the Coalinga area for weeks, but cleared up on the second day of the race, and Cody dominated the pros. Defending champion Nick Burson had a day he would rather forget, finishing 11th. The two had raced a month earlier at Gorman, with Burson coming out on top. 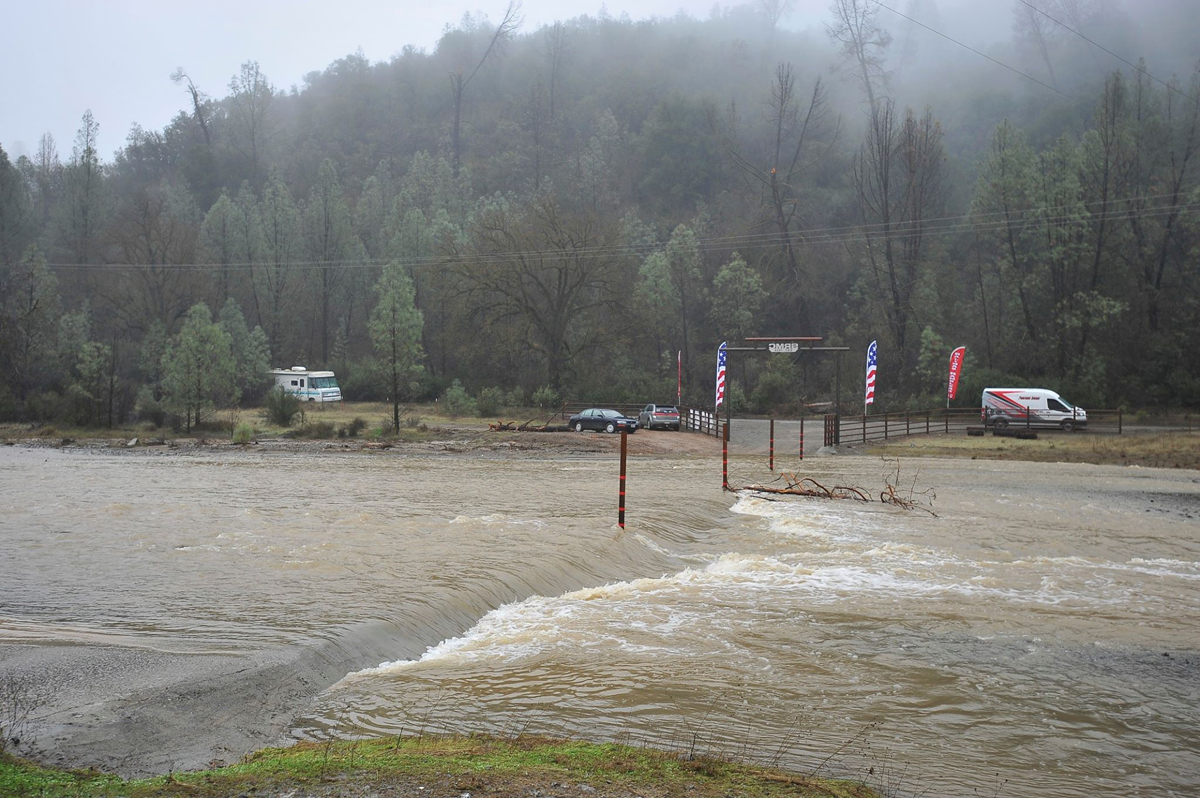 The Clear Creek event was so wet that the road into the pits was almost impassible. That’s Nick Burson’s van on the other side of the water. The wettest of the two days was Saturday, when the youth and vintage classes were held. 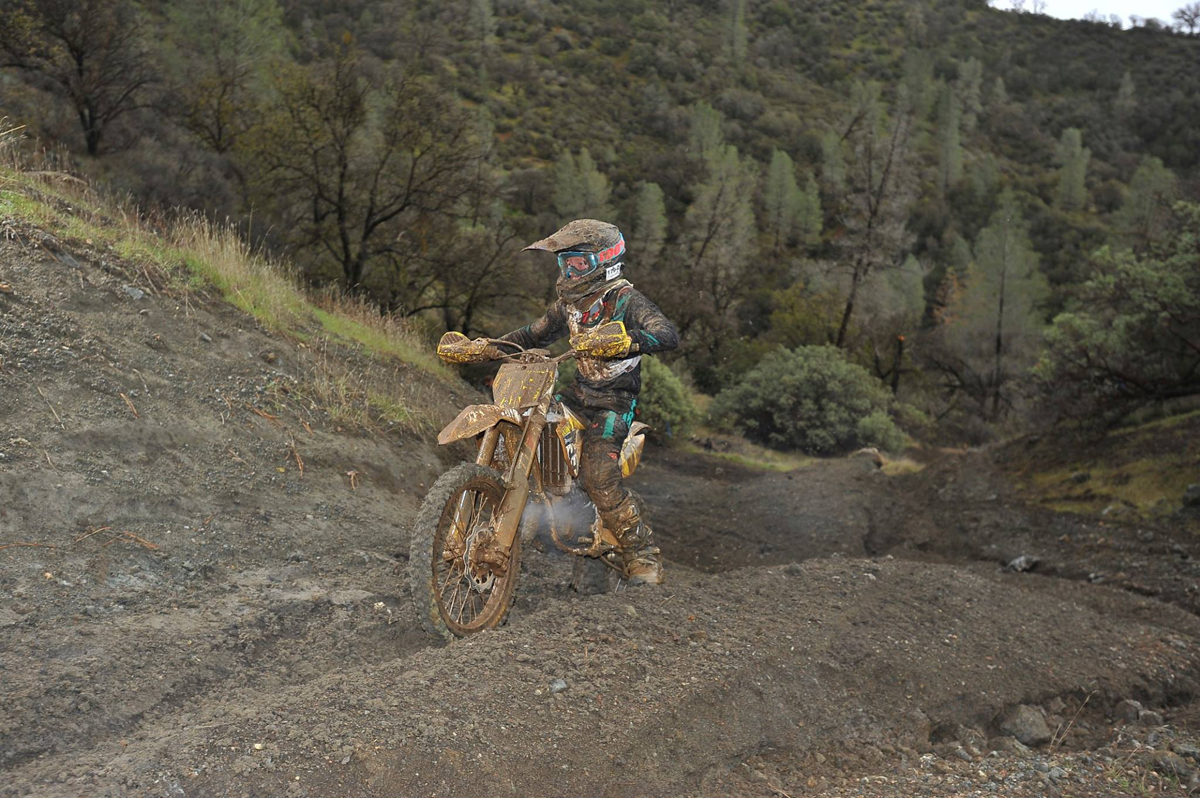 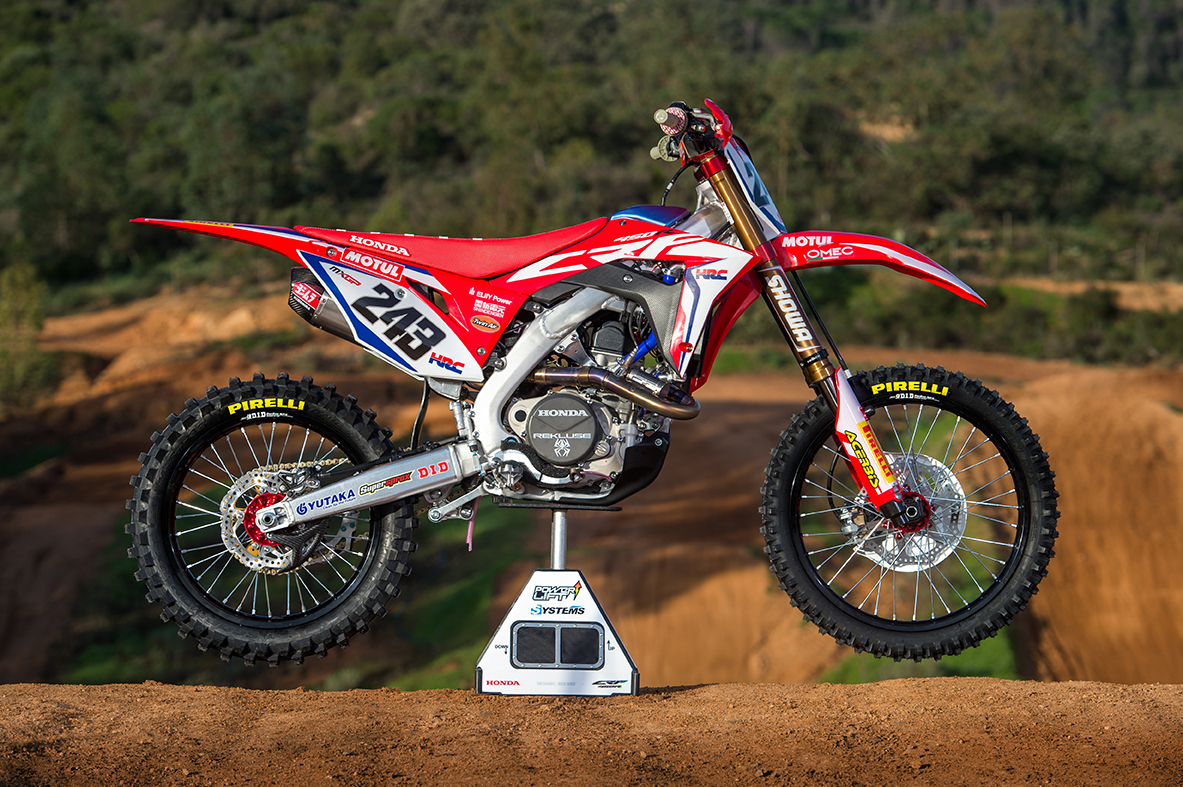 This weekend is the first MXGP of the year. Qatar will host the kick-off again, using the off-beat night track. It’s going to be fun to watch. Tim Gajser is one of the youngest world champions ever, at are 20. He won the MX2 championship in 2015 at 19! Here’s a pretty interesting shot of his Honda. He doesn’t have to run a production based bike, but it looks like the frame and engine cases are right off the shelf stockers. He has the electric starter from the RX model, and has lost the kickstarter lever. The Rekluse clutch is interesting. The sensor on the exhaust is probably only used for testing prior to the race. 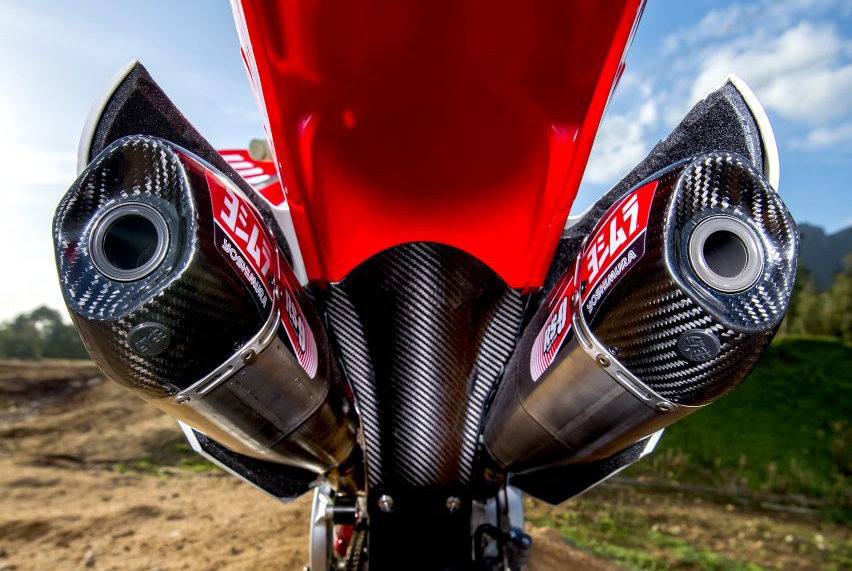 Honda claims that this is the lightest bike on the MXGP circuit, although I don’t know how they could be so sure. There are a bunch of carbon fiber and titanium parts. 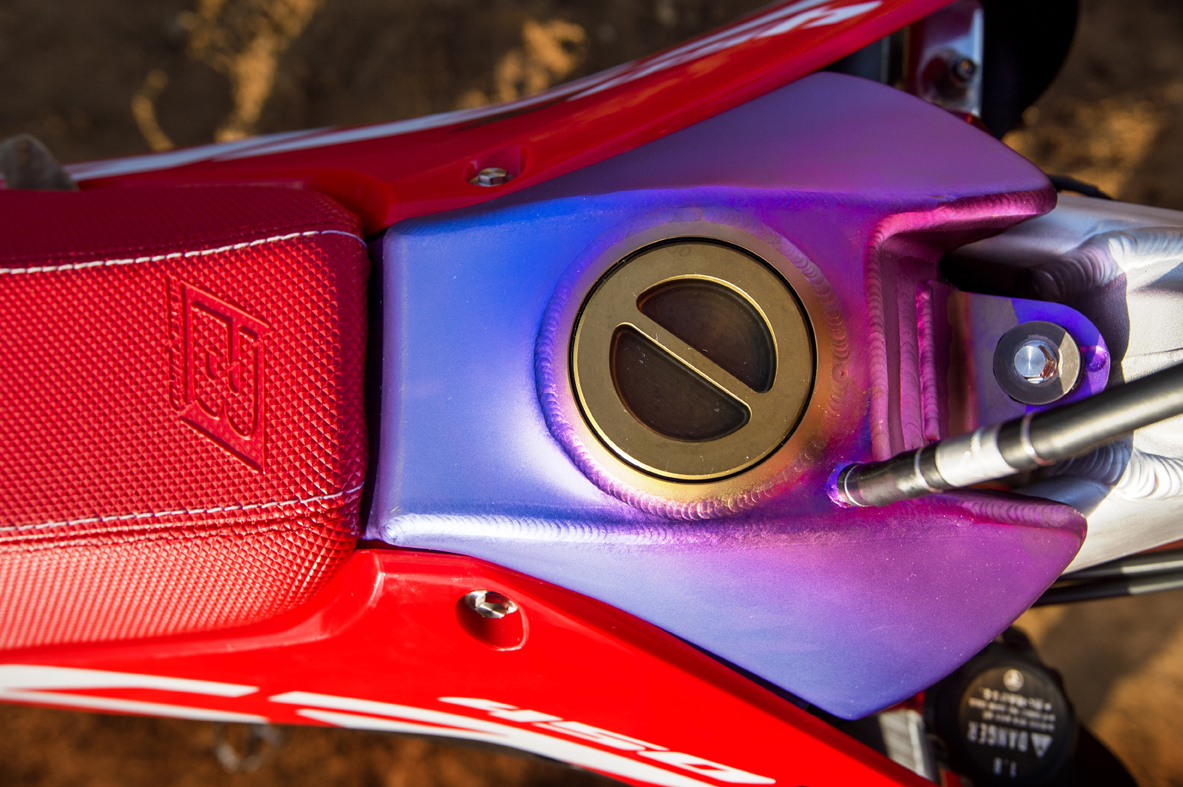 Gajser’s bike has a custom fuel tank, and presumably more capacity. Honda will not release the size. It still looks like titanium. Why wouldn’t it be? 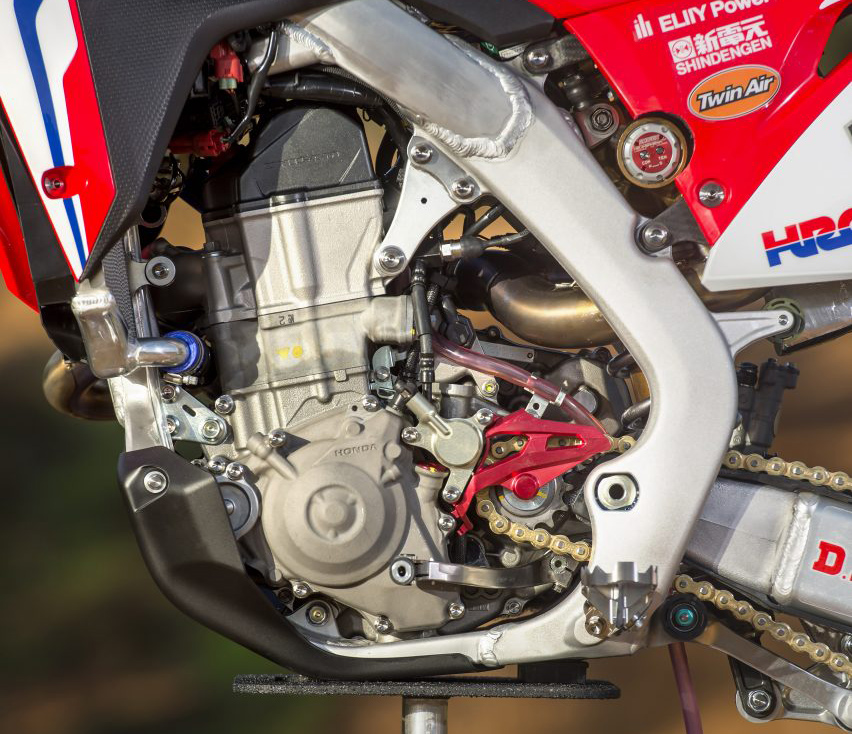 There’s that hydraulic clutch slave cylinder again. We hope to see it in production some day. On the official Honda specs, it listed “spark plugs” as NGK. Plural. 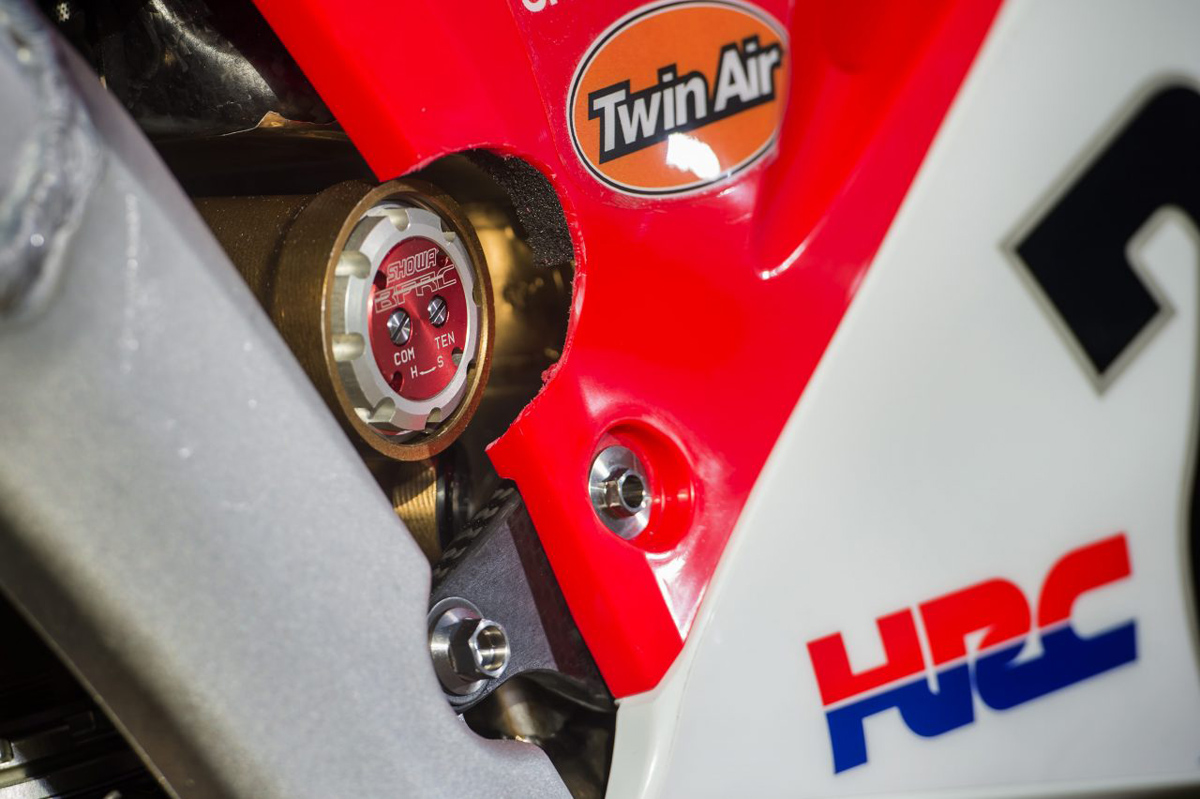 The works Showa rear shock has a lot going on.

The eighth annual Ricky Carmichael Amateur Supercross is going to take place March 12 at Daytona Speedway. Here’s the latest about that event from  Daytona:

We are happy to announce 2 seminars during the Ricky Carmichael Amateur Supercross at Daytona International Speedway.

The first one will be a training and nutrition seminar hosted by Robb Beams. Robb Beams is world renowned Human Performance Coach who has over 100 amateur championships and 4 pro number one plates to his resume. He is the founder of MotoE’s Complete Racing Solutions Performance Program and creator of the mental development program Blueprint of Success used by many of today’s top racers. Ricky Carmichael will also be in attendance to help answer any questions as well.

The seminar will focus on the areas of:

In addition Coach Robb will be offering free 20 minute phone consultation to anyone who attends the seminar and signs up (a $75 value) to see how Coach Robb and his staff can help your rider reach his/her potential, please email his staff at [email protected] if you have any questions or need anything clarified.

The second seminar will be focused on sponsorship and marketing and will be offered by Kyle Nobel from Hookit.

Join Hookit and learn the ins and outs of sponsorship along with how to properly represent yourself in the rapidly evolving digitally connected world.

Highlights of the session include:

We hope you will find these off-track seminars useful and that you will attend.