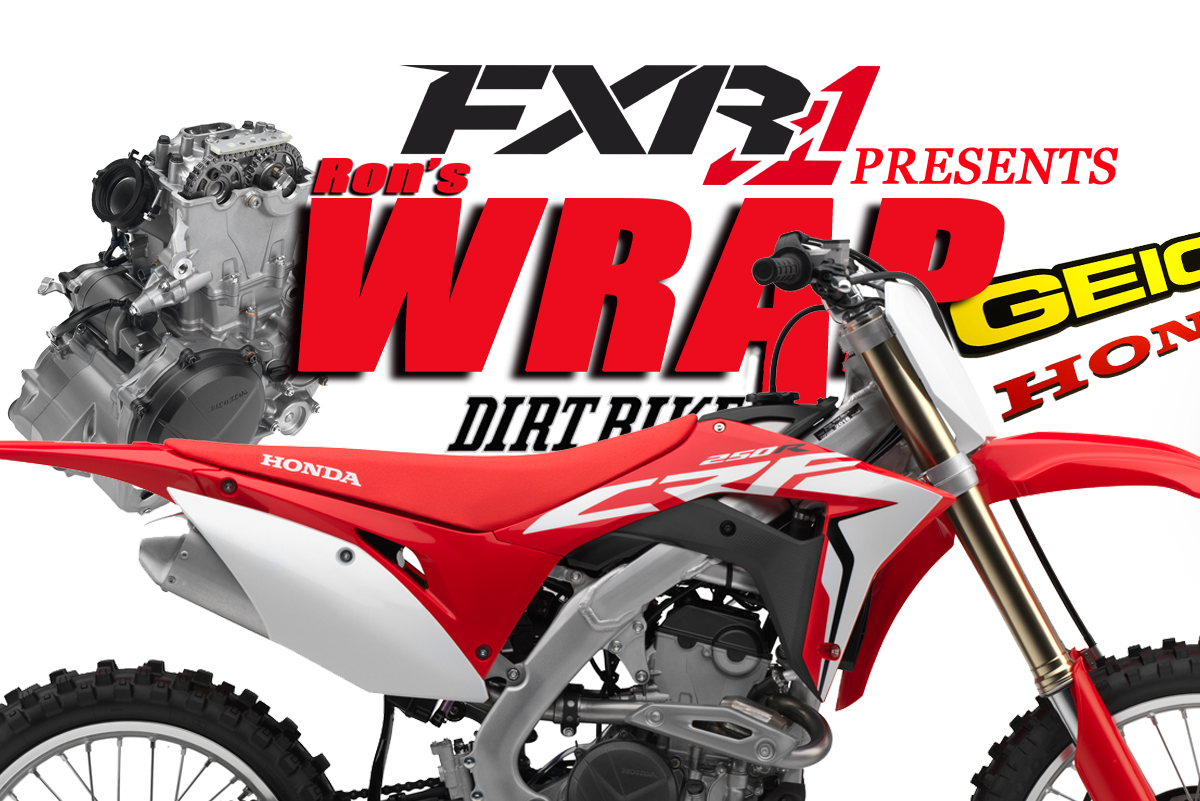 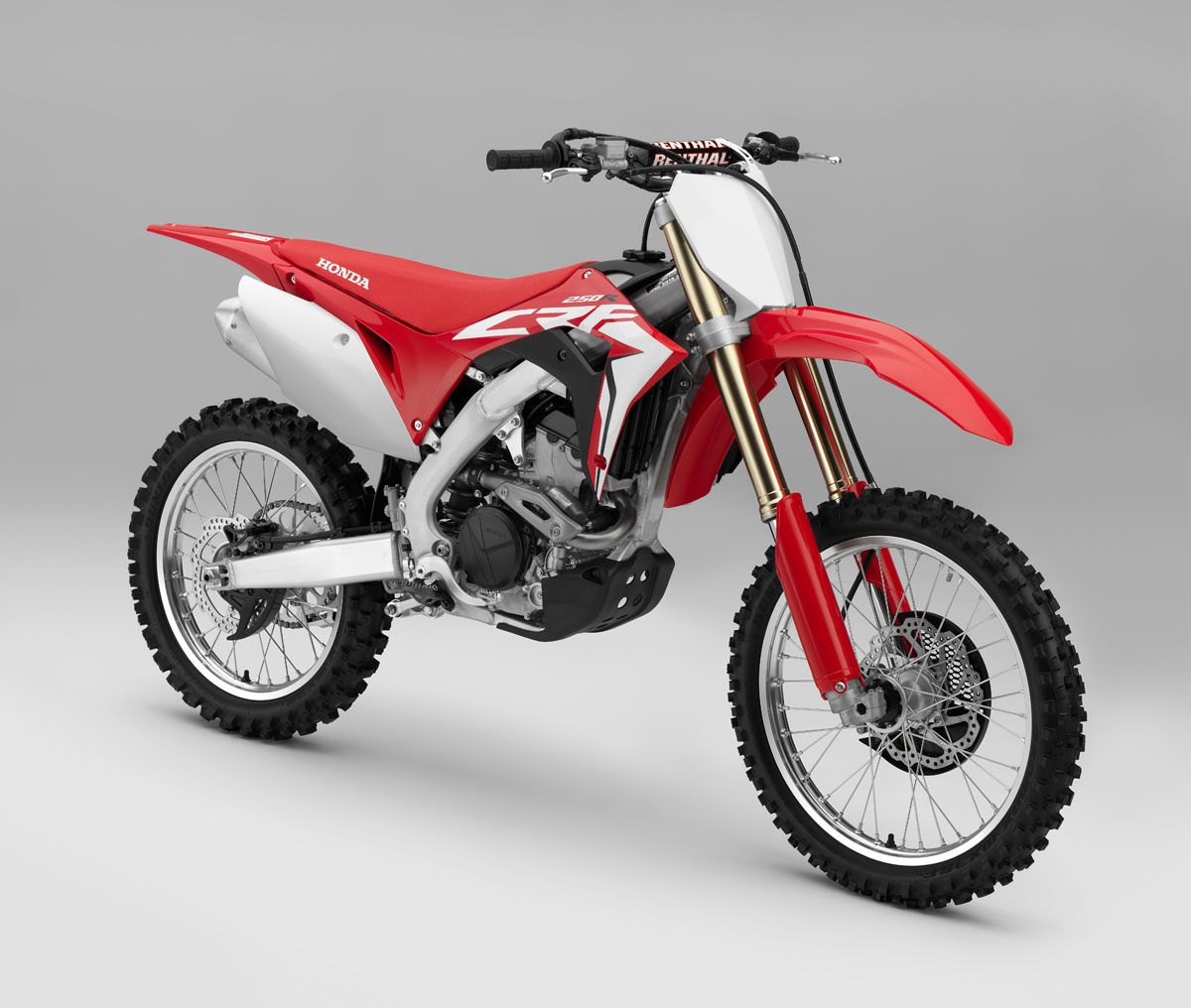 Last Sunday evening was the official release of the 2018 Honda CRF250R, which is probably the most significant new Honda off-road bike in 10 years. Usually, when we say a bike is all-new, we’re talking about parts, not ideas. The new 250 has new parts, new ideas and changes in direction. We were shown the bike a week earlier after signing a non-disclosure agreement. Honda didn’t want anyone to see the bike before its public unveiling at the Loretta Lynn’s Amateur Nationals. 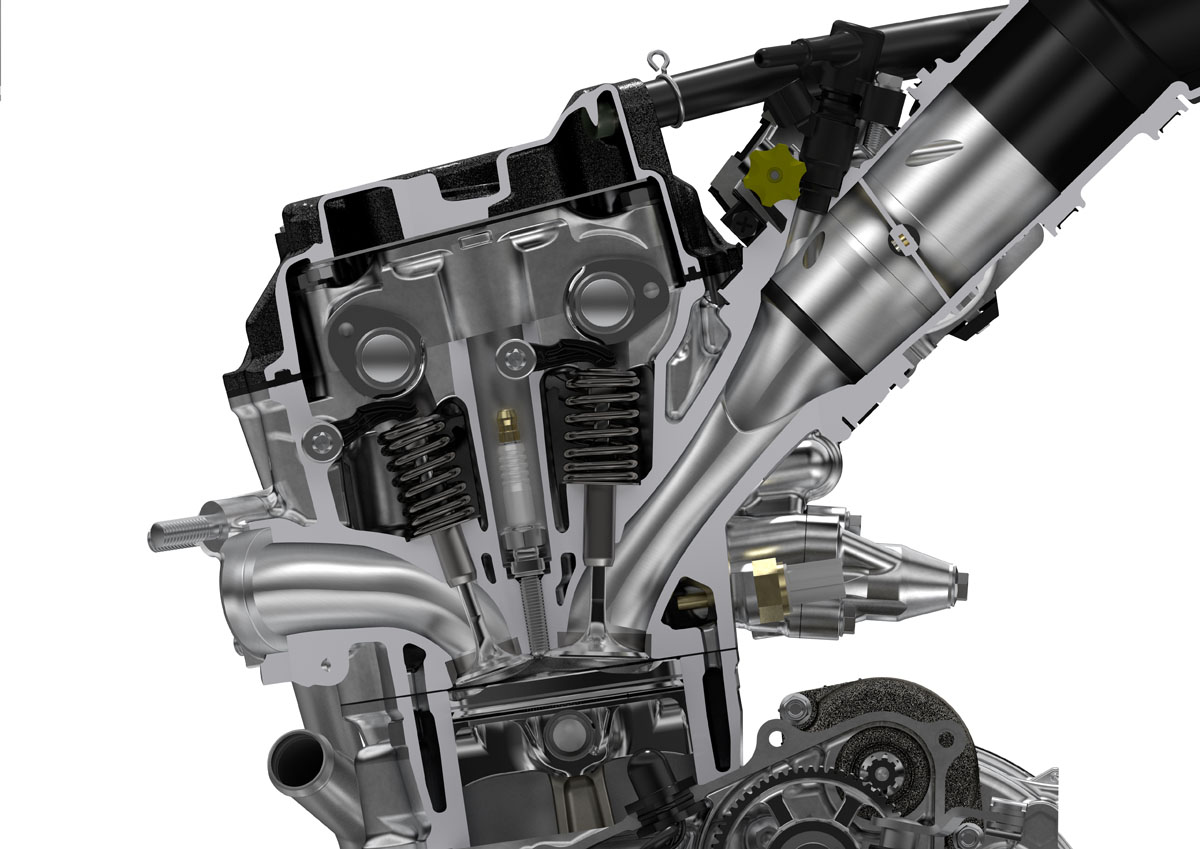 The most important new direction is the fact that Honda gave up on the single overhead cam design. For years the company was selling its Unicam design as the best of both worlds. They claimed that by placing the cam over the intake valves, it allowed higher revs, like a DOHC engine, but was lighter and simpler. KTM showed that a DOHC engine could be light and that finger followers (tiny rockers between the cam and the valve buckets) allowed more freedom in valve placement. You would think that more parts in the valve train would inhibit revs, but apparently the opposite is true in this case. Honda engineers agreed and the top end of the new CRF is very much like a KTM. 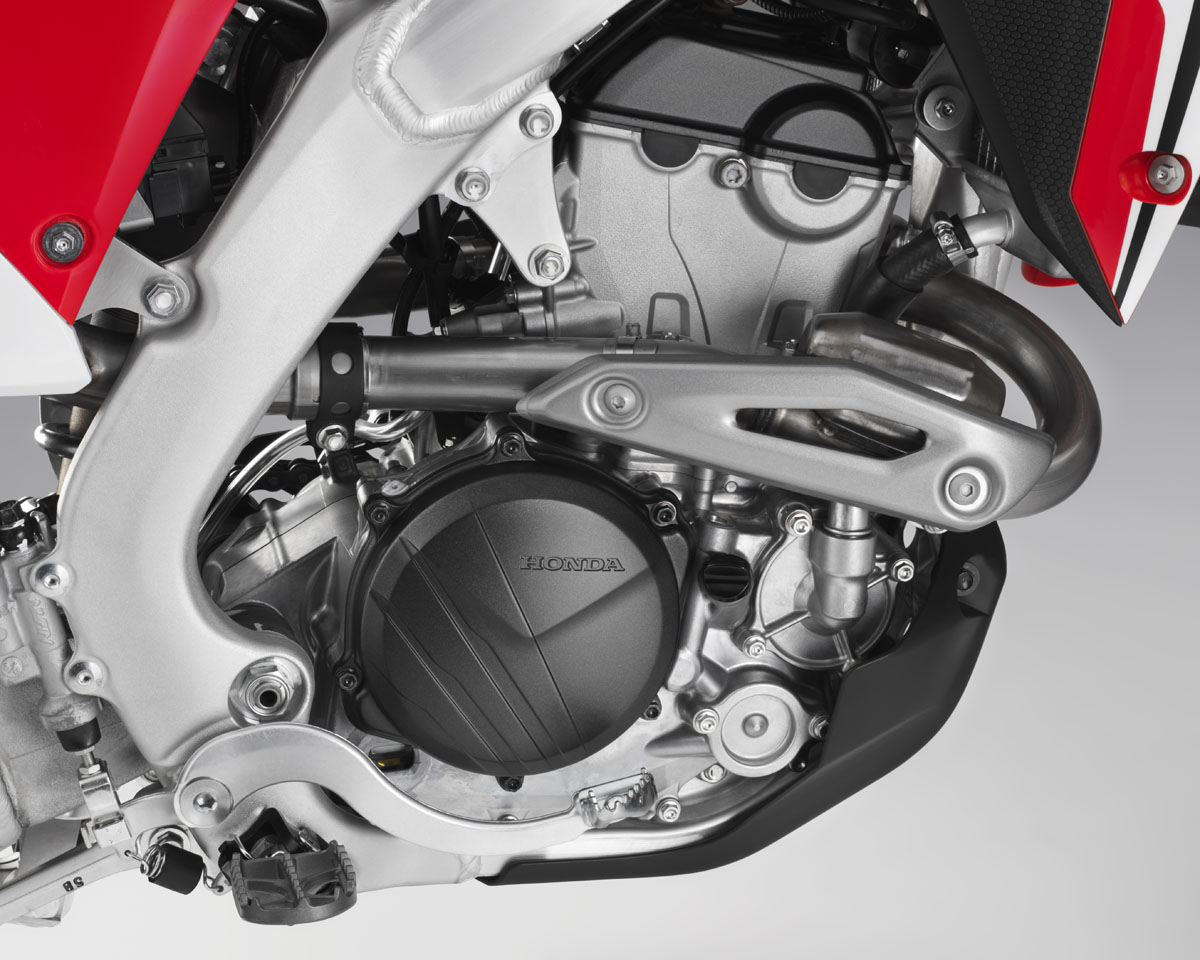 KTM’s influence on the Honda is obvious. The fact that the engine is electric start and has no provision for a kickstarter makes that clear. Honda engineers probably didn’t start this project with the idea of doing that. Look at the frame in the photo above. The reason it curves rearward above the swingarm is to make room for a kickstarter. The frame is shared with the Honda CRF450R, which was originally designed to have one. This curve will probably go away in the next generation of the frame when Honda tries to trim off more weight. 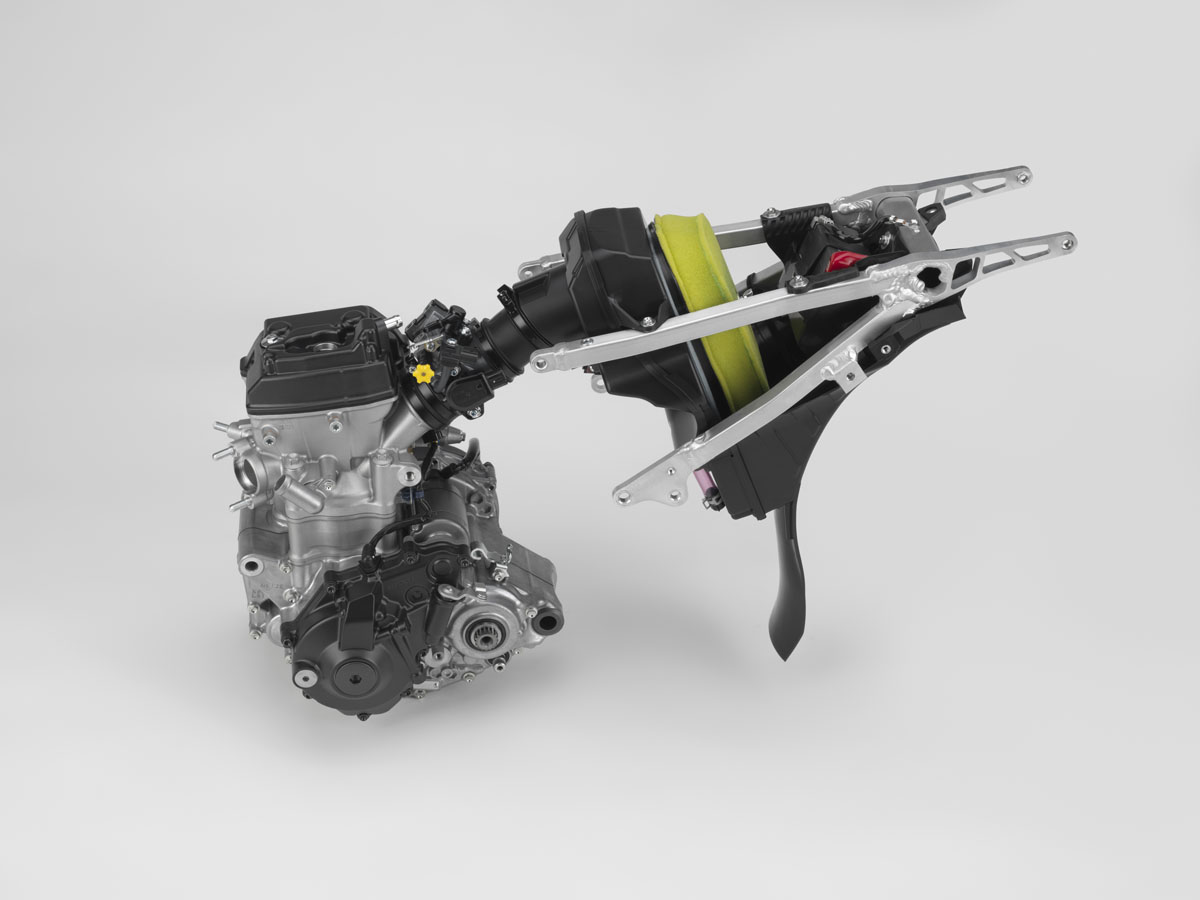 Weight might be an issue with the new bike. Honda says it gained about 6 pounds. On our scale, last year’s bike was 222 without fuel. So if the new one is 228, it will be a full 10 pounds heavier than the KTM. The whole chassis is shared with the 450, aside from the lower engine cradle. The idea of routing the intake over the shock was introduced on the 450 last year, and was a huge departure from the way motorcycles have been designed since 1981. Instead of bending the intake around the shock, it drops in from the top and has a much straighter shot into the combustion chamber. 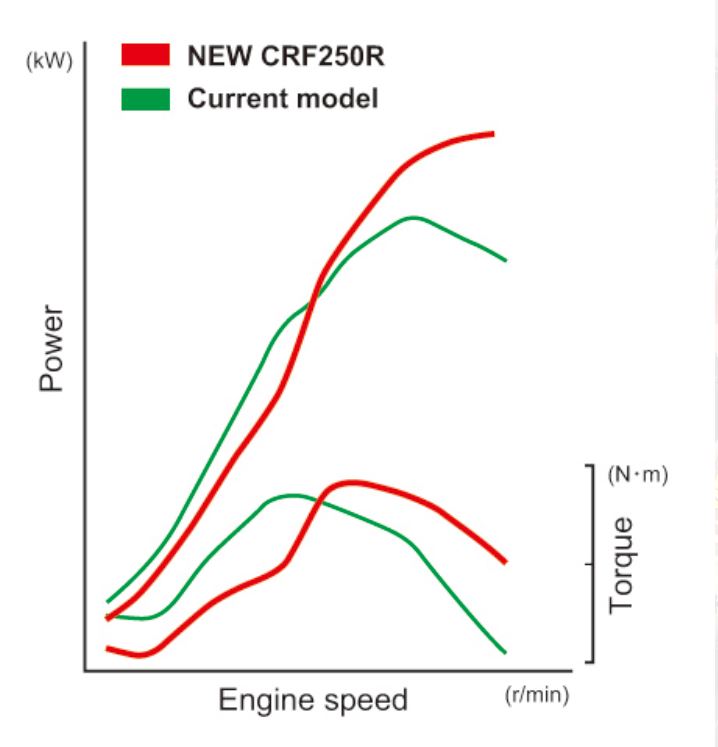 Honda gave us this dyno chart without numbers so we could compare the power output of the new bike with that of the old one. It shows a big increase on top and a decrease at lower rpm. That’s to be expected. The previous Honda 250 had the most low-end of any 250F, but that did very little for it on the track, where the bike is never ridden below 8000 rpm. The Honda-provided chart was stretched out on the vertical axis to visually minimize the low-rpm shortcoming and maximize the increase up high. I wanted to see how it would look if it were presented more normally, so I stretched it out on the horizontal axis, and the result is below.

What I did next was totally unscientific, but I was curious how the new bike might compare with the others in the 250 class. The shape of Honda’s 2017 curve (the green one above) was pretty much an exact duplicate of the one we got when we tested the bike on the FMF dyno during our 2017 250 shootout. That was performed on a Dynojet dyno, and I have no idea how Honda’s graph was obtained. But when I matched up the two 2017 curves on top of each other, it gave me rpm and horsepower numbers, so I got to see roughly how the 2018 would look against the rest of the class. Here’s how the new Honda looks superimposed on our 2017 dyno chart. 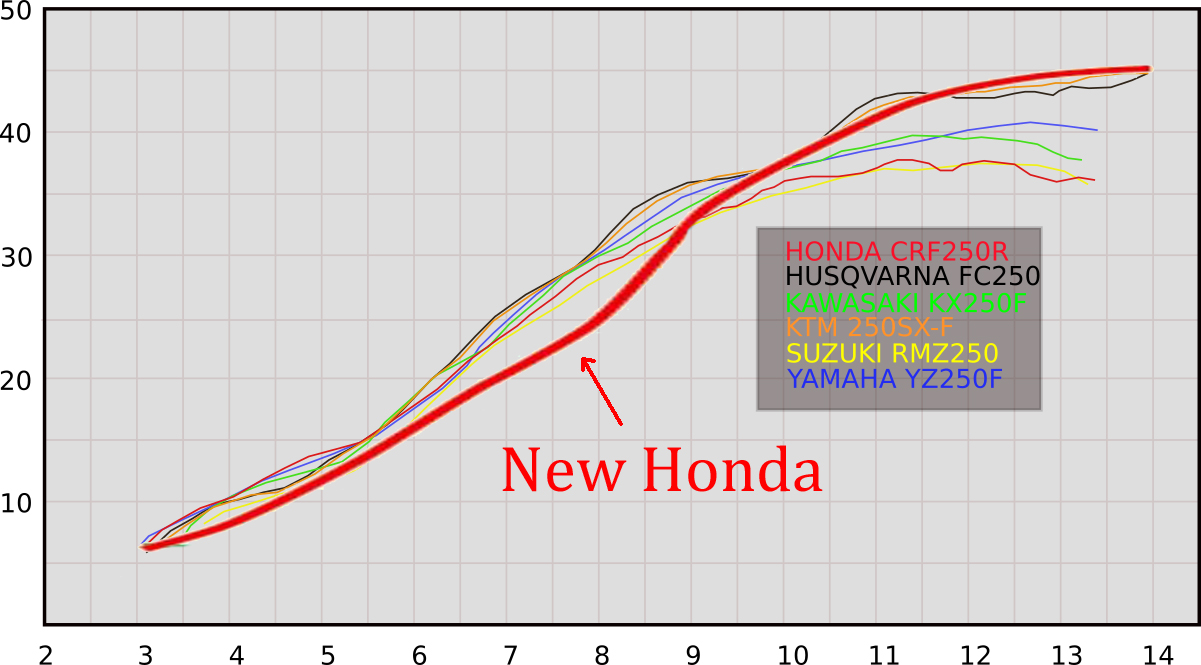 There are a million reasons this isn’t accurate, particularly because you shouldn’t compare data from two different dynos. But the scale is corrected because the two 2017 CRF250 curves fit directly over each other. It was simply a fun exercise and it shows that the Honda is a top-end motor similar to the KTM. 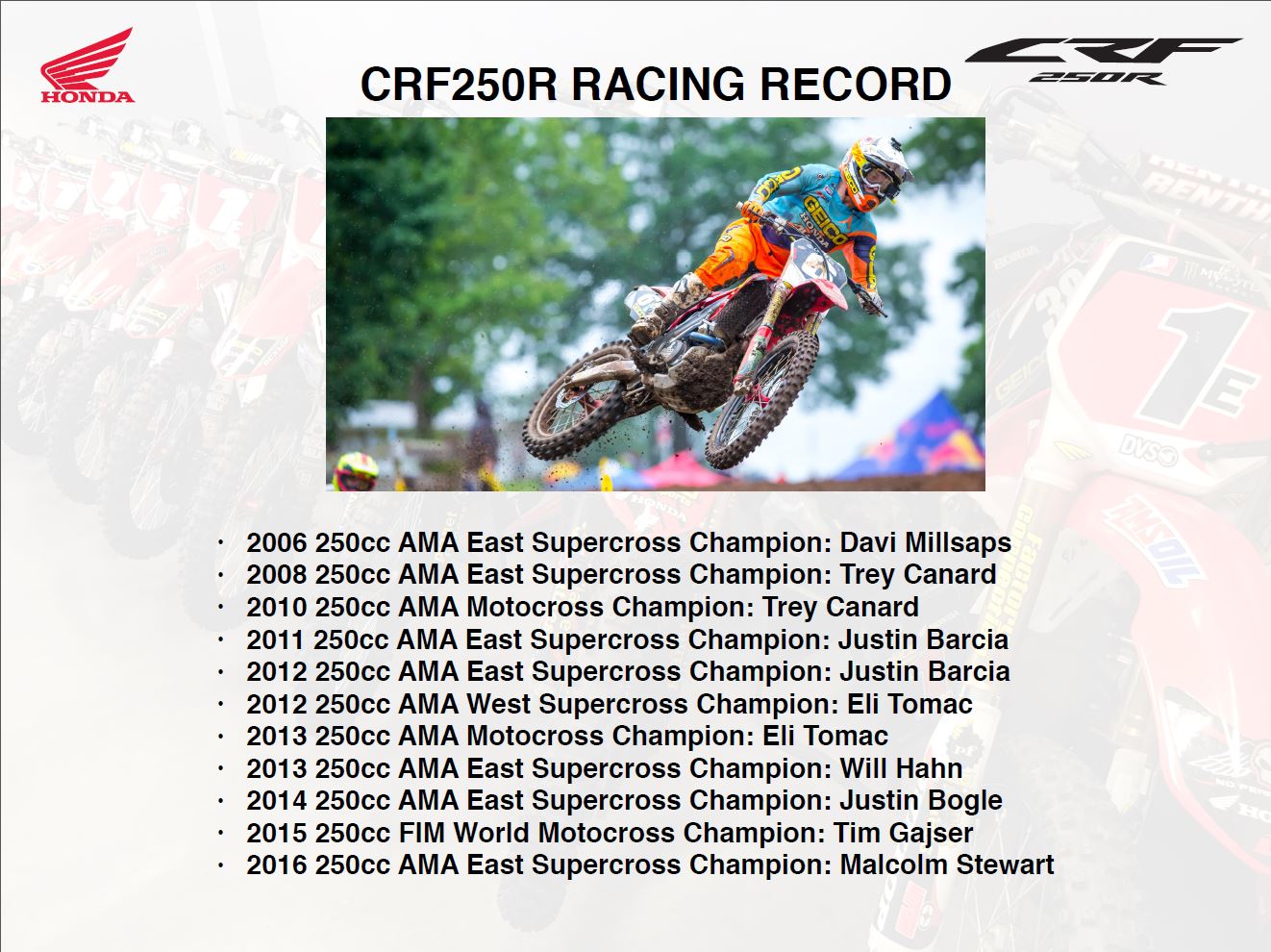 The Honda briefing last week was very thorough, as these things usually are. It started off with a summery of the Honda CRF250R’s success in professional racing, above, which is pretty impressive.  The bike came out 12 years ago and it’s earned 11 championships. The briefing took place at the Geico Honda race shop in Corona California. This team has a long, sweet history. It’s also known the Factory Connection team, which has had a number of different title sponsors, going back to the ’90s. 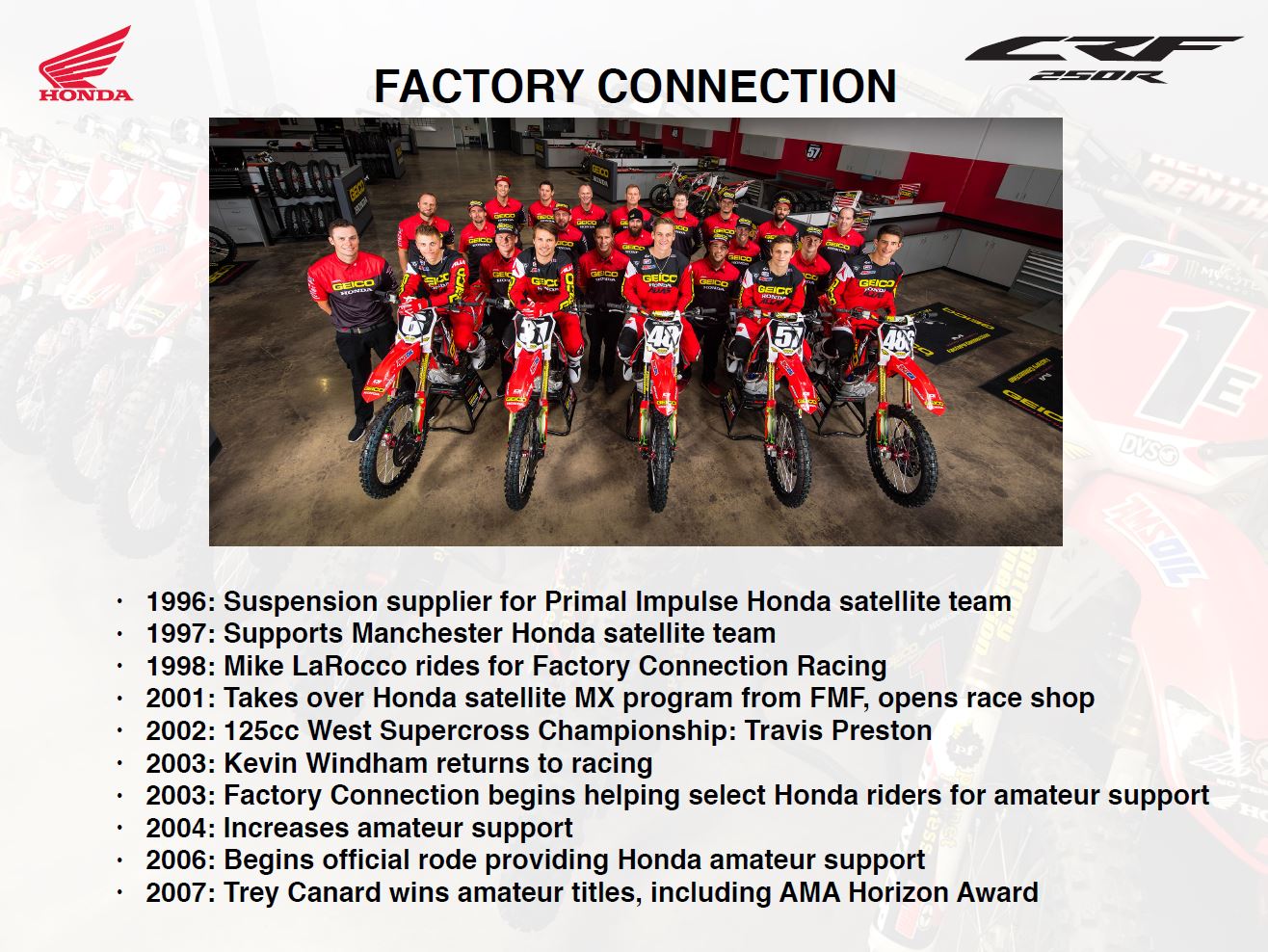 When the presentation of the new bike was done, we got to tour the race shop. The lobby had a collection of the more recent championship-winning bikes. 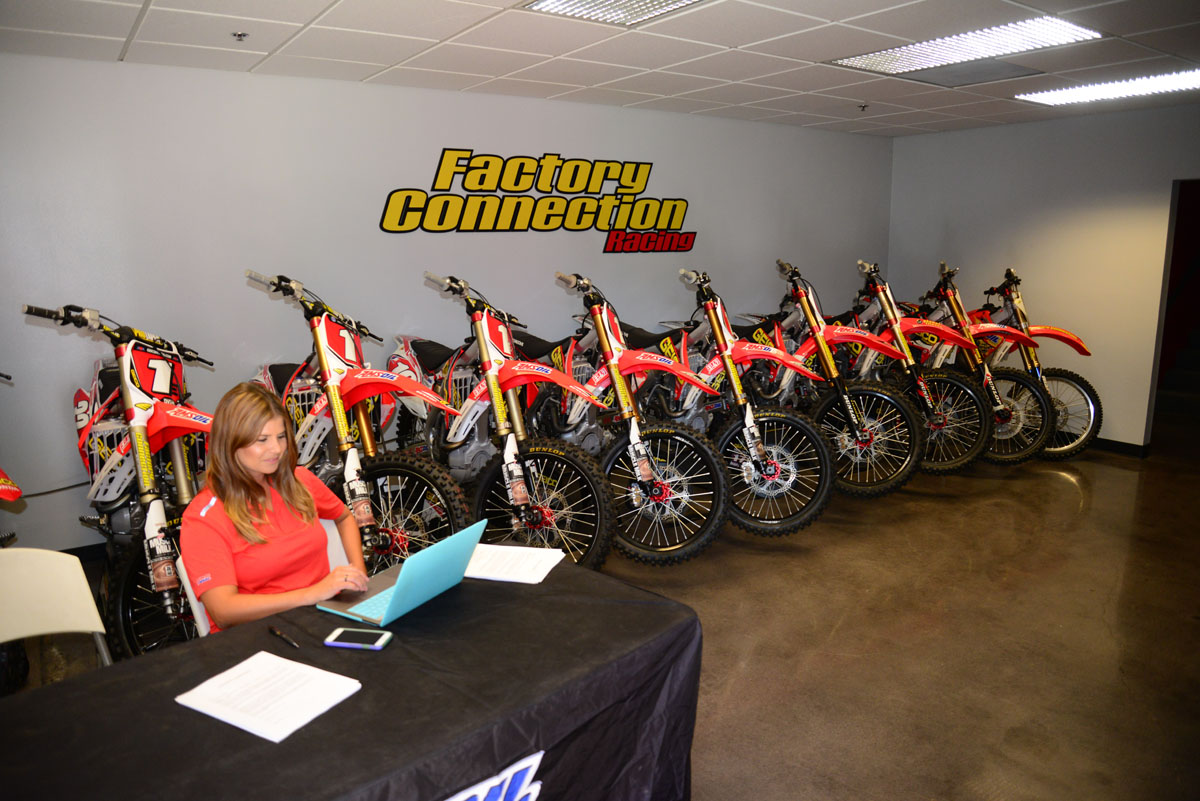 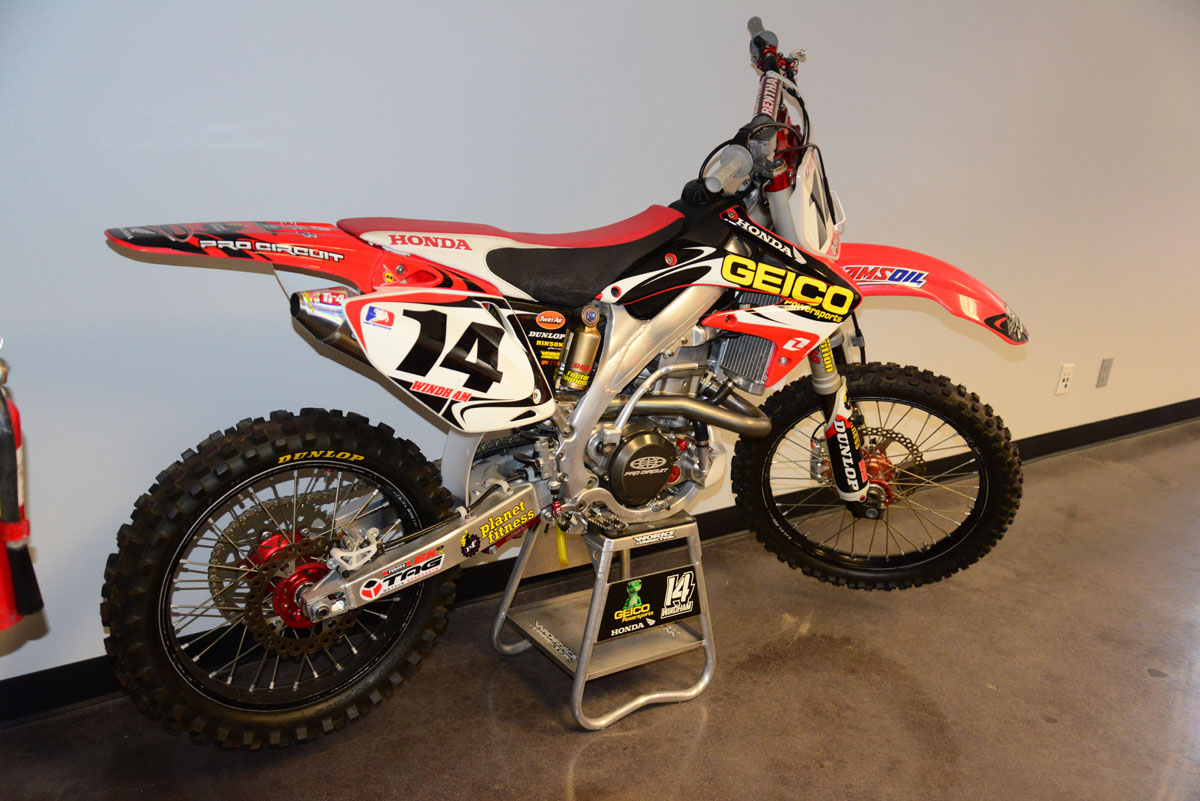 Opposite the bikes with big number one plates is one particular bike that never won a championship, but still holds a very special place in the history of the team. Kevin Windham’s Factory CRF450R from his final year of racing is on permanent display. 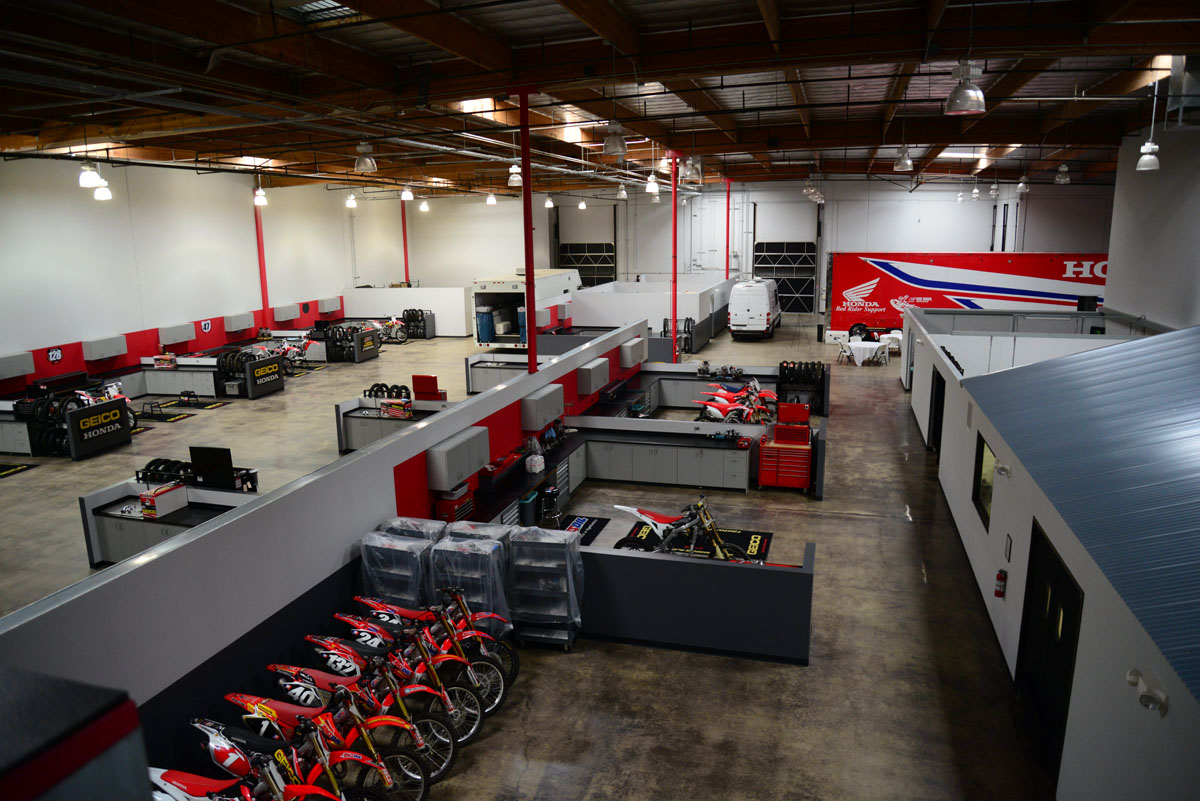 The business end of the shop is huge, with immaculate stalls for each team member. The clean room to the right is the motor shop. 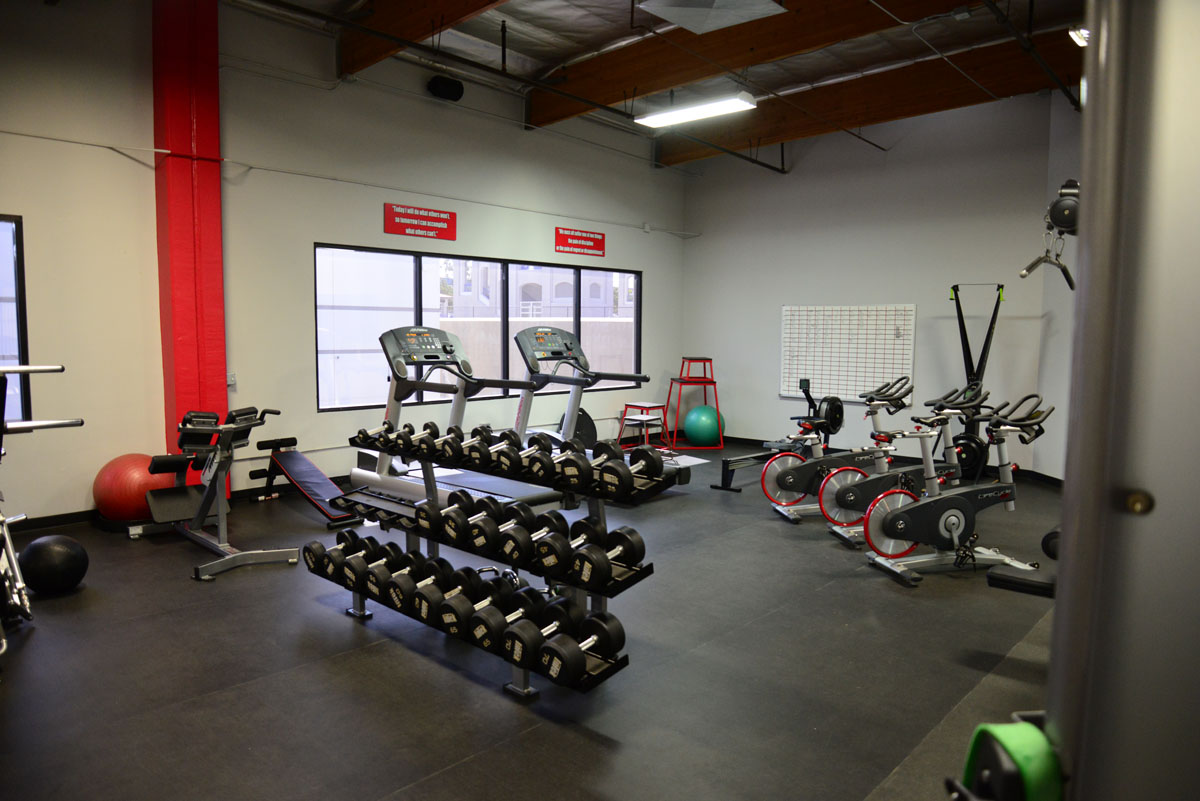 When the Geico Honda riders are in town, they have no excuse for not training. 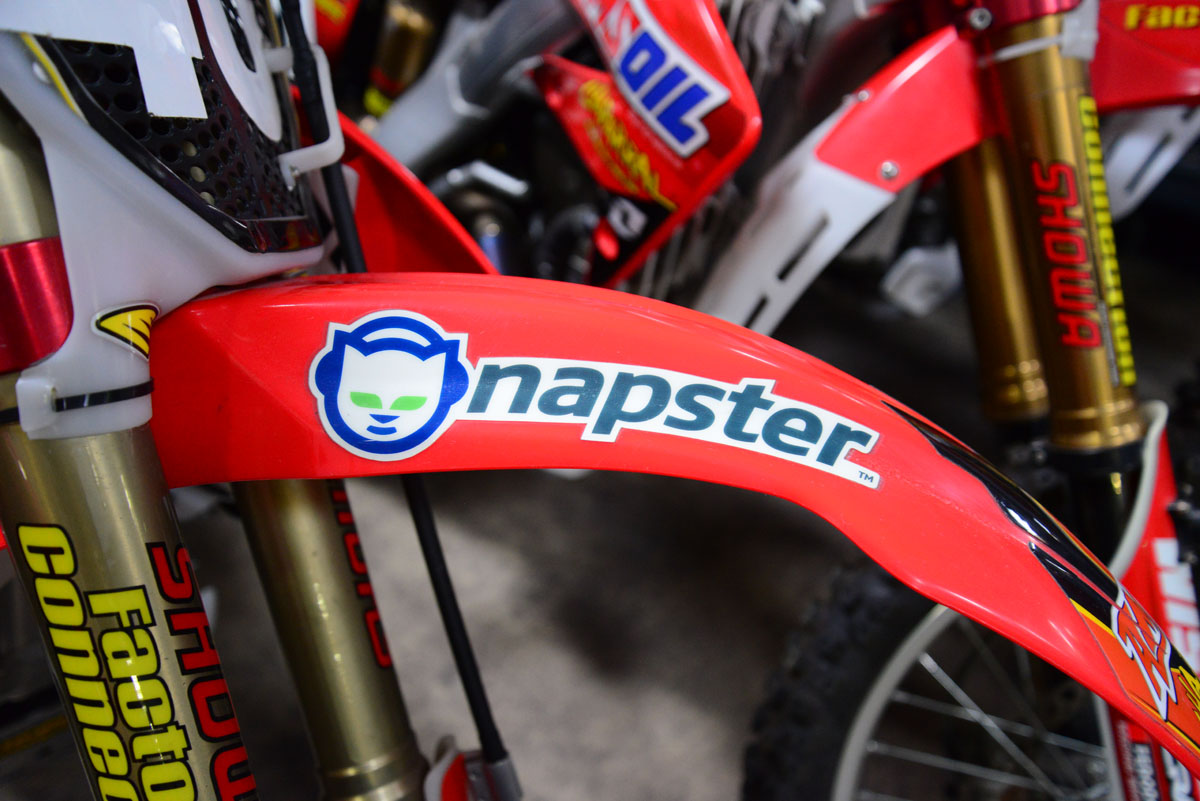 There have been some very interesting sponsors over the years. 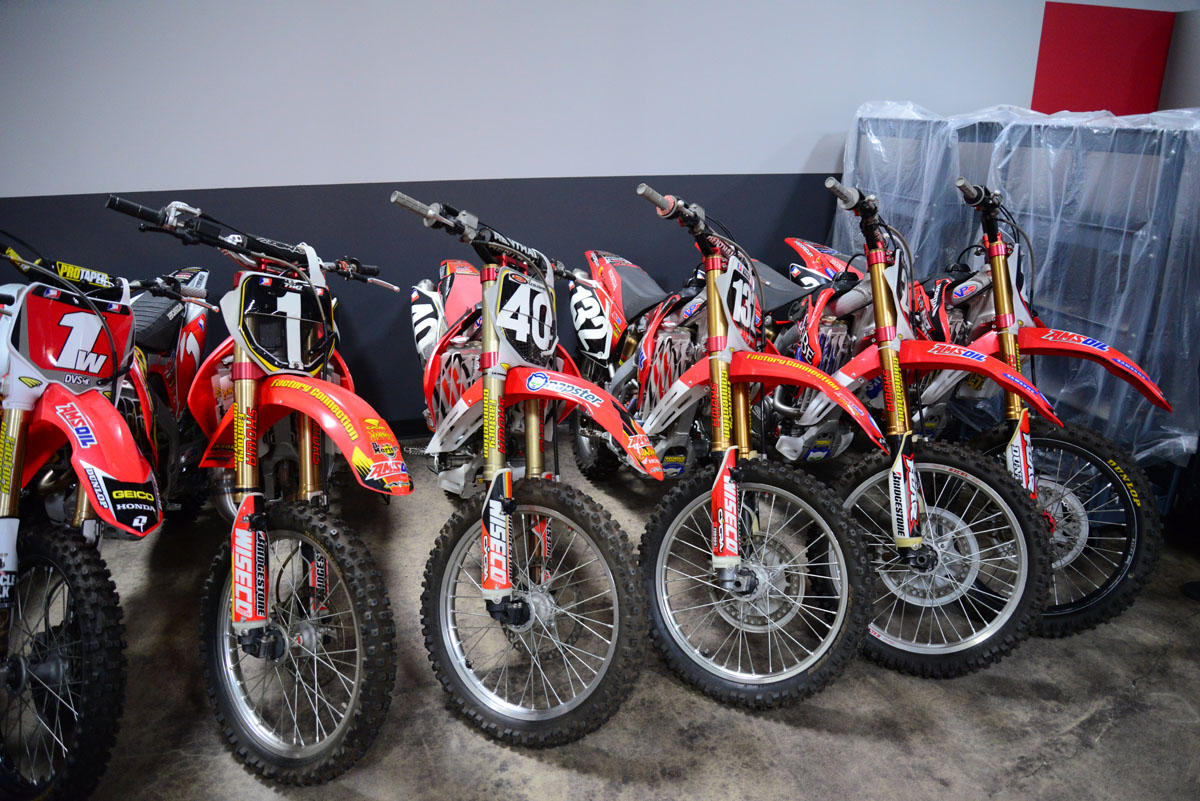 There’s a lot of history in this row of bikes. That’s Travis Preston’s bike with the number one plate. In 2002 he beat James Stewart to with the West Coast SX title. 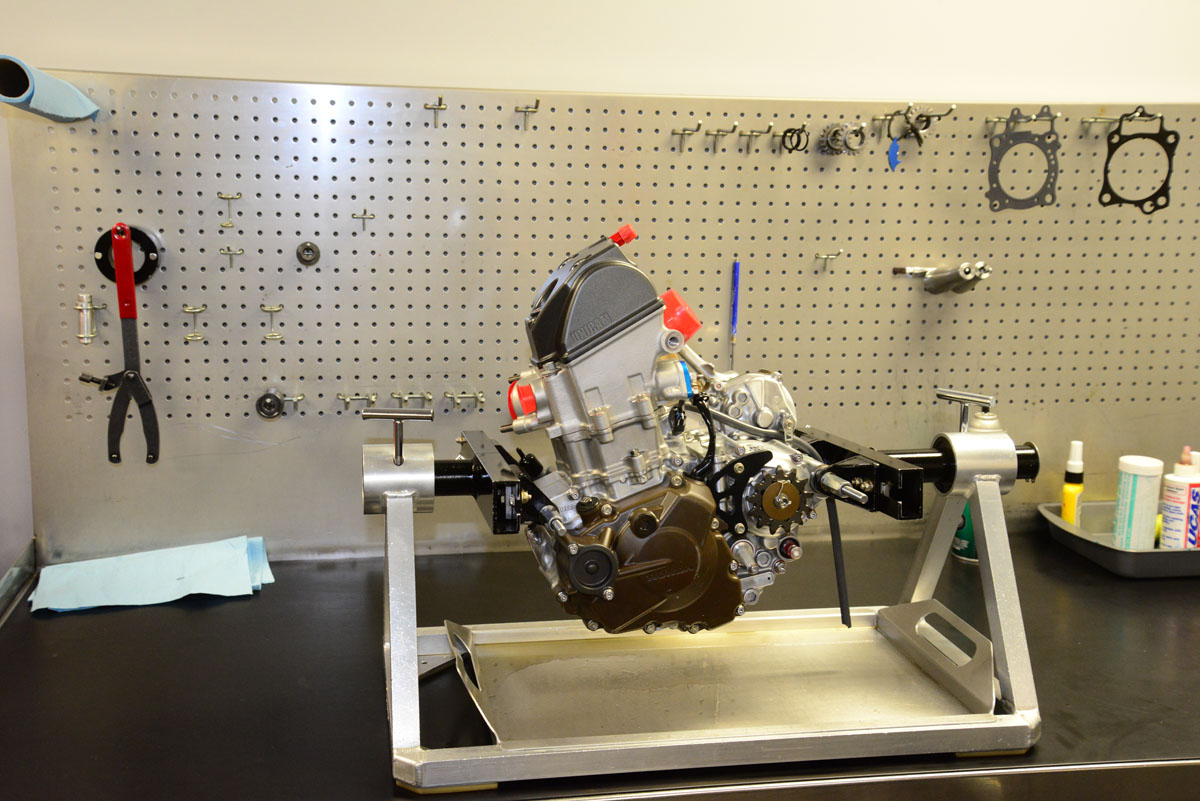 The motor shop has an incredible work load. There are about 10 motors apart at any given time. 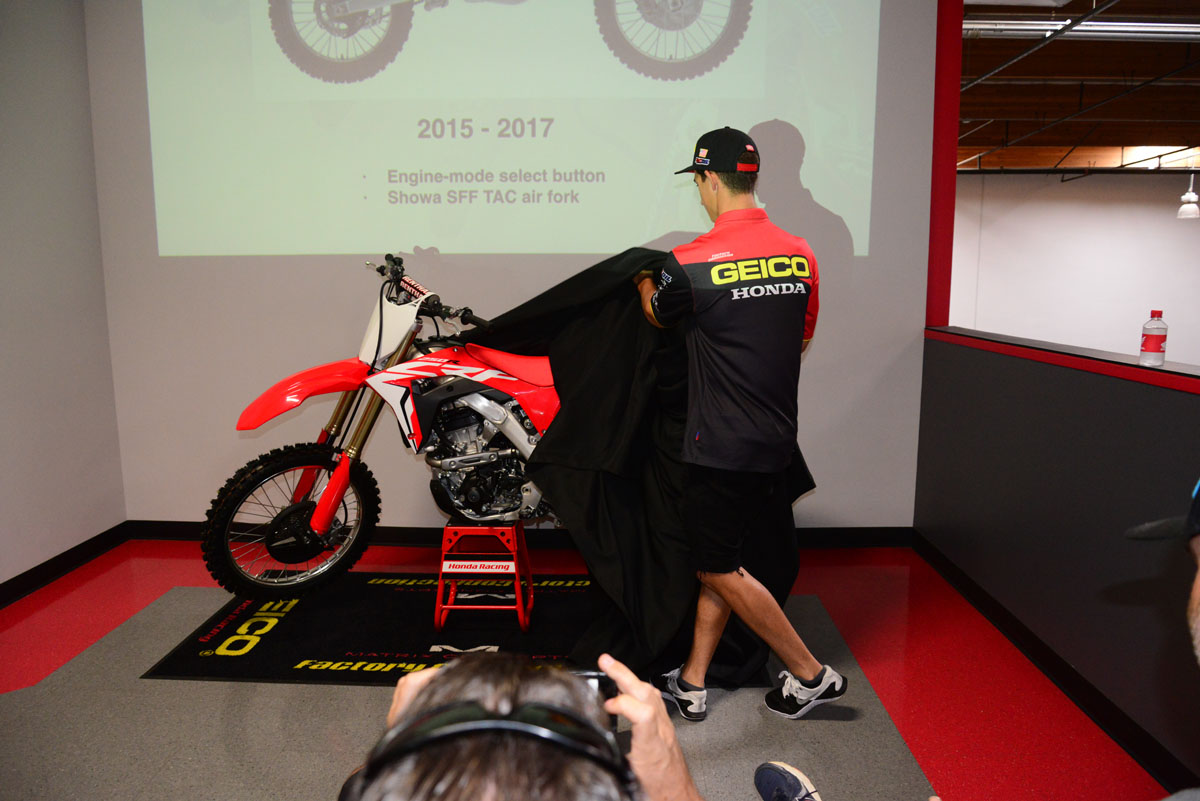 Chase Sexton is the team’s youngest member. He got the honor of pulling the cover off the new bike.

Derek Drake got off to a much better start in the second 250 B Limited moto holeshot and lead every lap from start to finish. Parker Mashburn settled into a second-place pace, while Marcus Phelps worked his way from eighth to round out the overall podium. 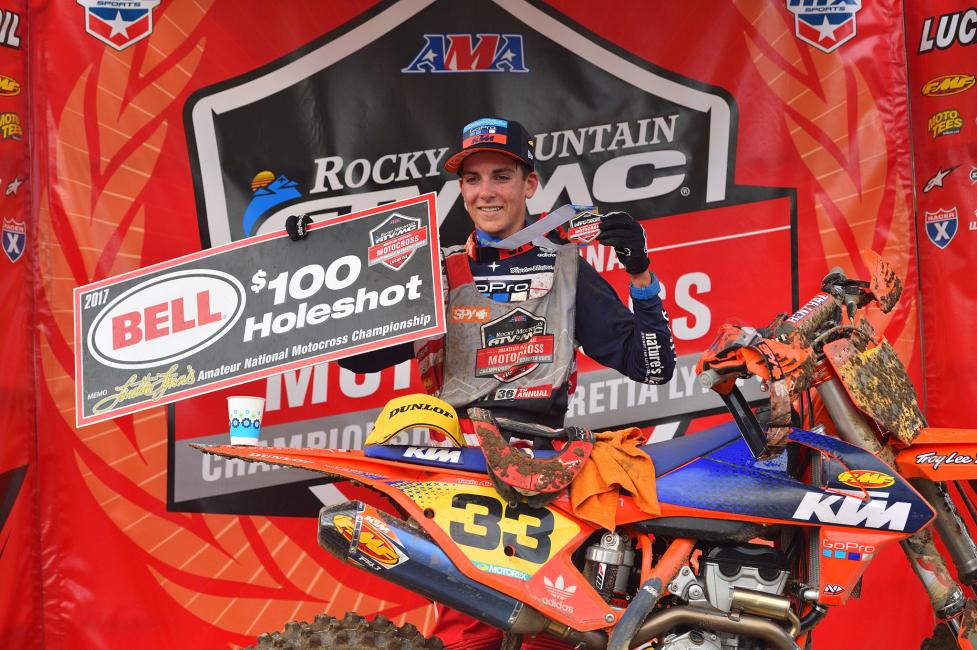 Derek Drake claimed both the Bell Helmet Holeshot Award and the 250 B Limited win.

The 85 (9-12) class witnessed Gavin Powers rocketing off the line to earn the Bell Helmets Holeshot Award, but Jett Reynolds wasted no time stealing the top spot. Reynolds attempted to pull away from his competition, but felt immediate pressure from Matthew Leblanc who was on his rear wheel through the opening lap. As the race progressed, so did Reynolds’ time difference until the last lap when Leblanc made a last-minute charge and crossed the finish a mere two seconds behind Reynolds. Class rookie, Ryder DiFrancesco, rode a consistent race in third. 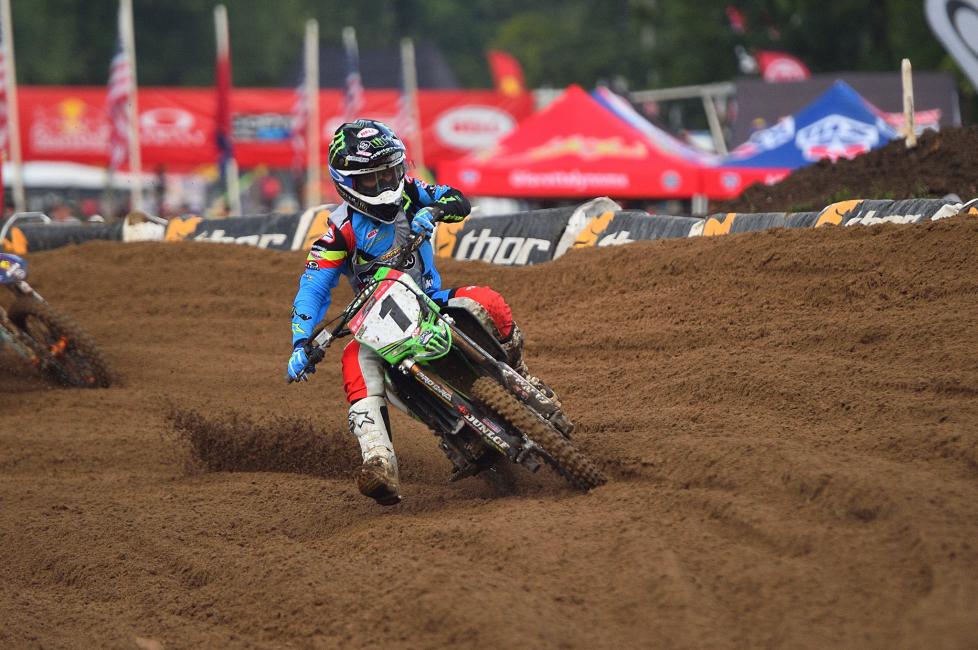 Jett Reynolds has four different moto wins on his resume this week at the Ranch.

Justin Cooper saw a much better start in the second 250 A moto than the first and made a quick pass on Jayce Pennington for the lead. Enzo Lopes followed Cooper passed Pennington. Cooper was trying to push a lead, but Lopes kept him honest. The battle continued through the rest of the moto, with Lopes trying everything in his power to get by Cooper. Fortunately for Cooper, Lopes struggled to get around the lapped riders on the last lap giving him a little bit of breathing room as he crossed the line in first. Lopes and Pennington took the last two spots on the box. 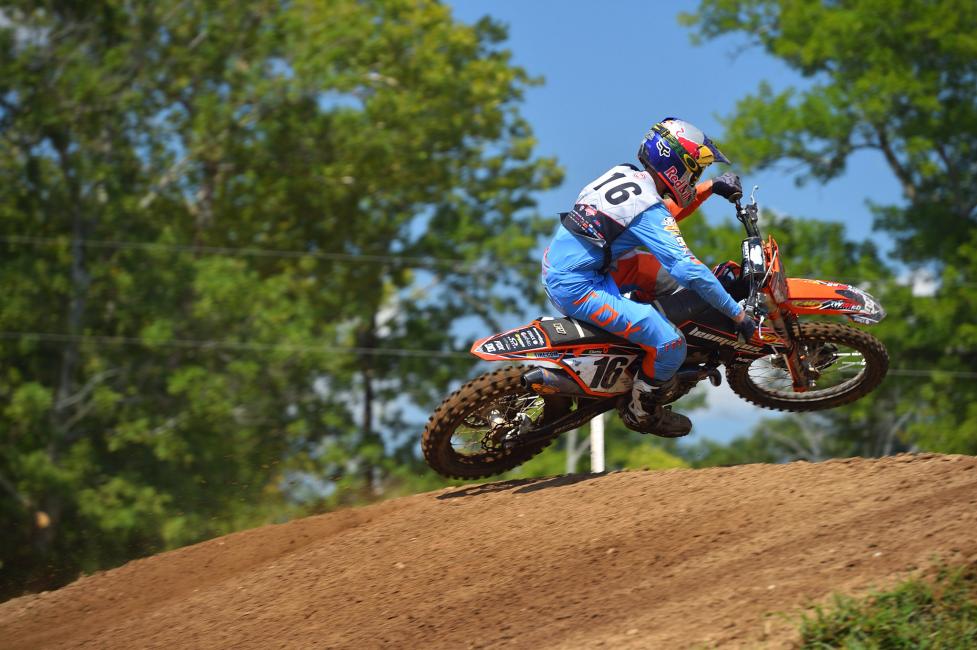 Enzo Lopes finished a hard fought second place in the second moto of 250 A.

John Grewe claimed his second Masters (50+) class win of the week, while Jordan Jarvis stood atop of the podium in Women (14+) Amateur after a disappointing DNF in the first moto. Drew Adams put it all together to secure another 51cc (7-8) Limited win. Ty Masterpool extended his streak with another win in the Supermini 2 (13-16) class. Wesley Allen took top honors in 450 C.

When the gate dropped for the 450 B division, Austin Watling shot out of the gate and lead the way until lap three when Brock Papi made the pass. Papi, who finished third in the first moto, was charging after he realized the moto 1 winner, Carter Halpain, went down on the first lap. Carson Brown was struck with bad luck with a mechanical issue which forced him to end his race early. Papi, Marco Cannella and Watling filled the podium, and Halpain finished just inside the top-five from a 33rd place start. 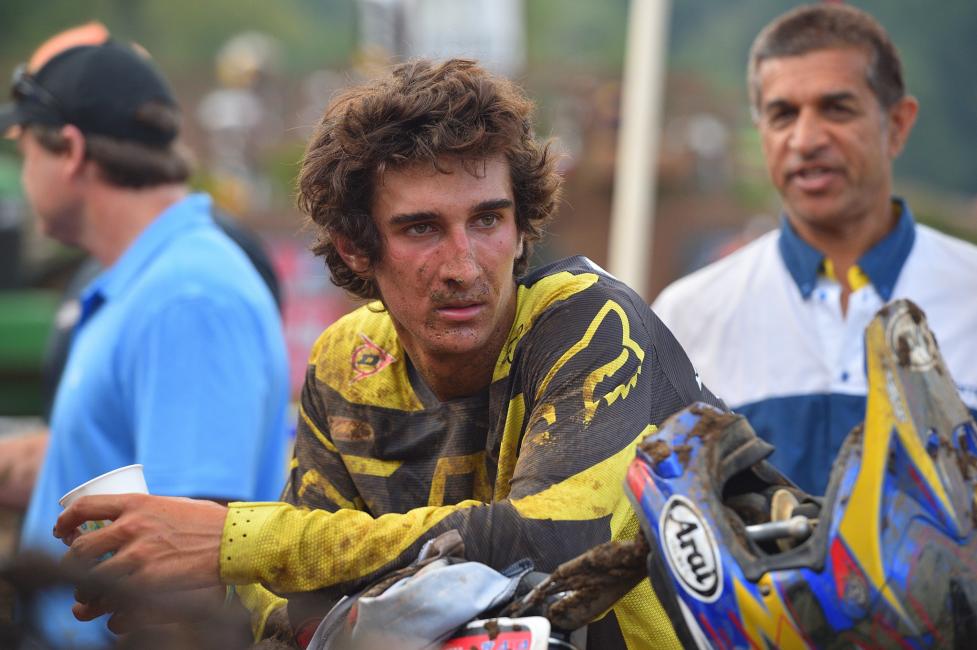 Marco Cannella had his best finish of the week in the 450 B class with second.

Supermini 1 (12-15) saw Dilan Schwartz emerge through corner first, where he grabbed the Bell Helmets Holeshot Award. Carson Mumford and Ty Masterpool were in tow, with other threatening competitors inside the top-five as well. With the battle for second heating up, Schwartz was able to slip away. Once Masterpool got into second he began chipping away at the time difference to first which didn’t take long. Schwartz bobbled in the Thor sweeper turn, but saved it and stole the win with Masterpool placing second. 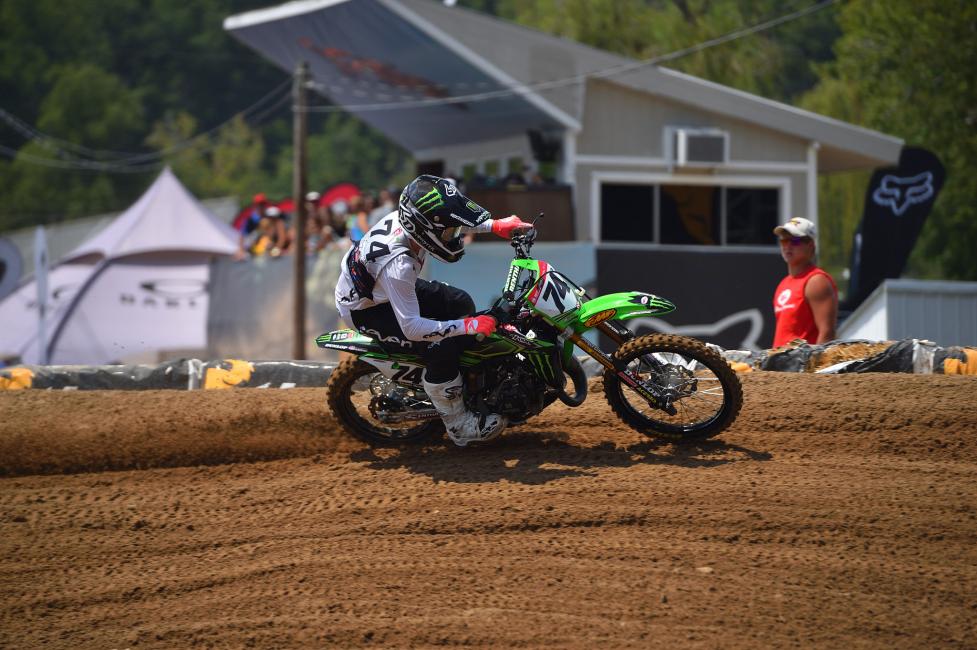 The 65cc (7-9) Limited class was dominated by Kade Johnson – who now sits ranked first heading into the final moto. Enzo Temmerman spent the entire moto recovering from an unfavorable start to finish second, and Evan Woody held onto third. 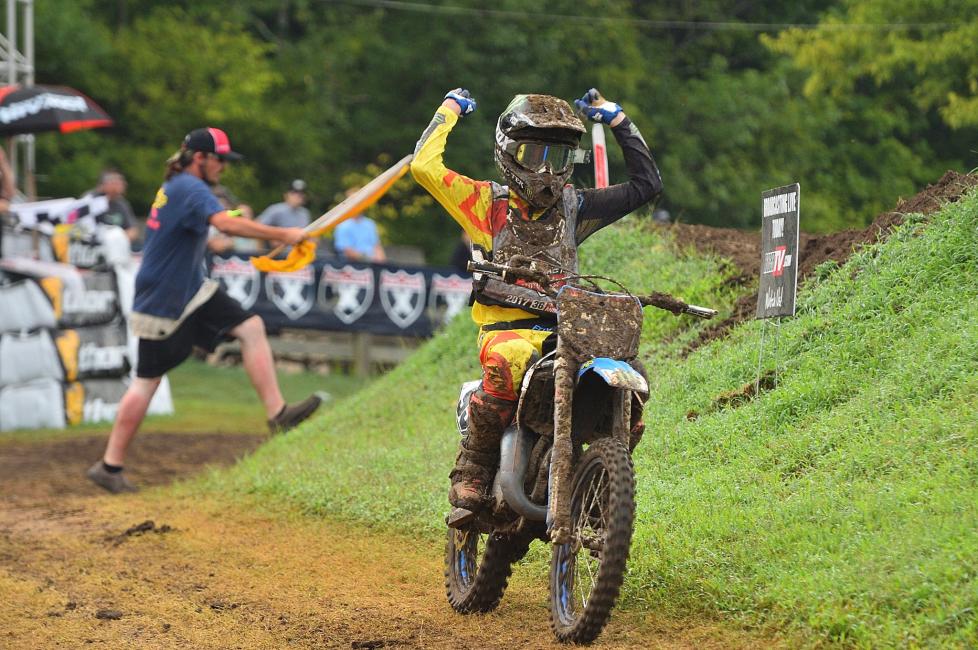