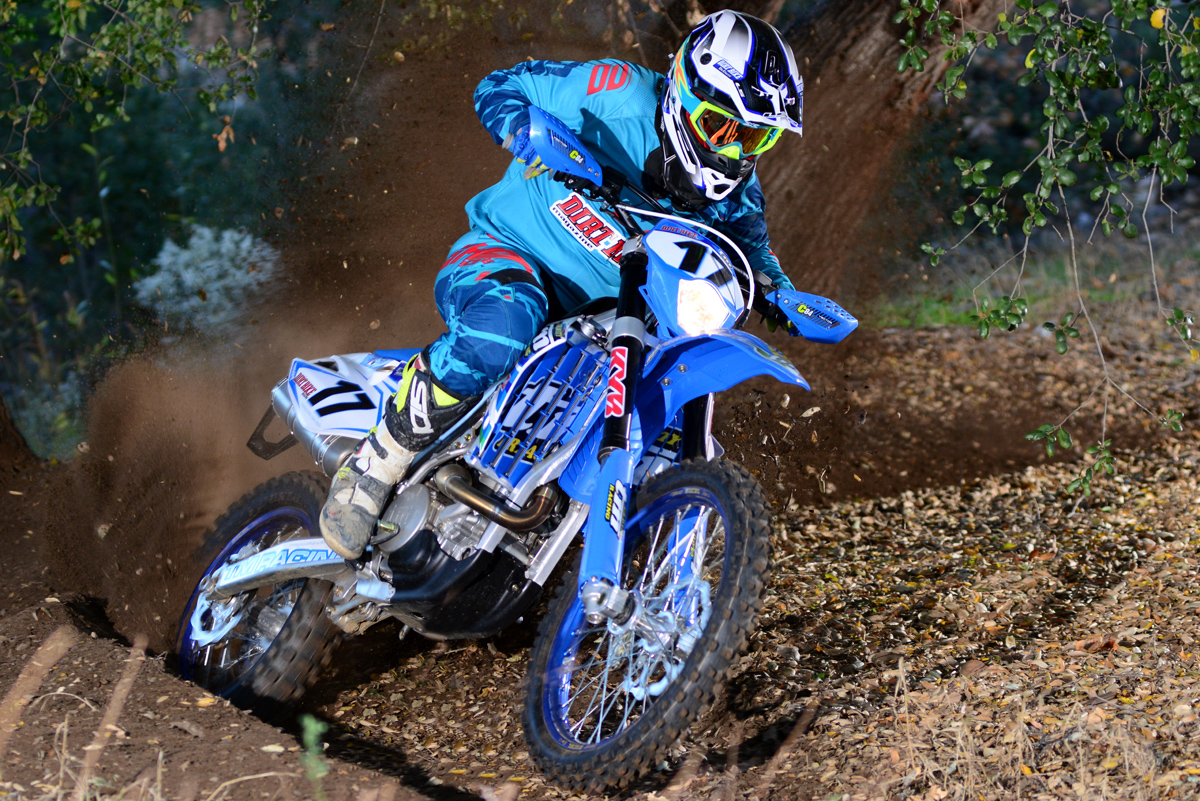 If you’ve been reading Dirt Bike for a while, you know that we have an affinity for unusual bikes. I’m particularly drawn to TMs, which are very exclusive, limited run bikes from Italy. Pete Vetrano, who is one of my closest friends, imported the make for years, although it was more of a labor of love than a real, money-making business. Two years ago, he sold the business to a Dutch motorcycle nut named Ralf Schmidt, who moved to the U.S. to carry the TM torch. Ralf is much more technically minded that Pete ever was (sorry, Pete), and as a result we have much better tech info on TMs than ever before. 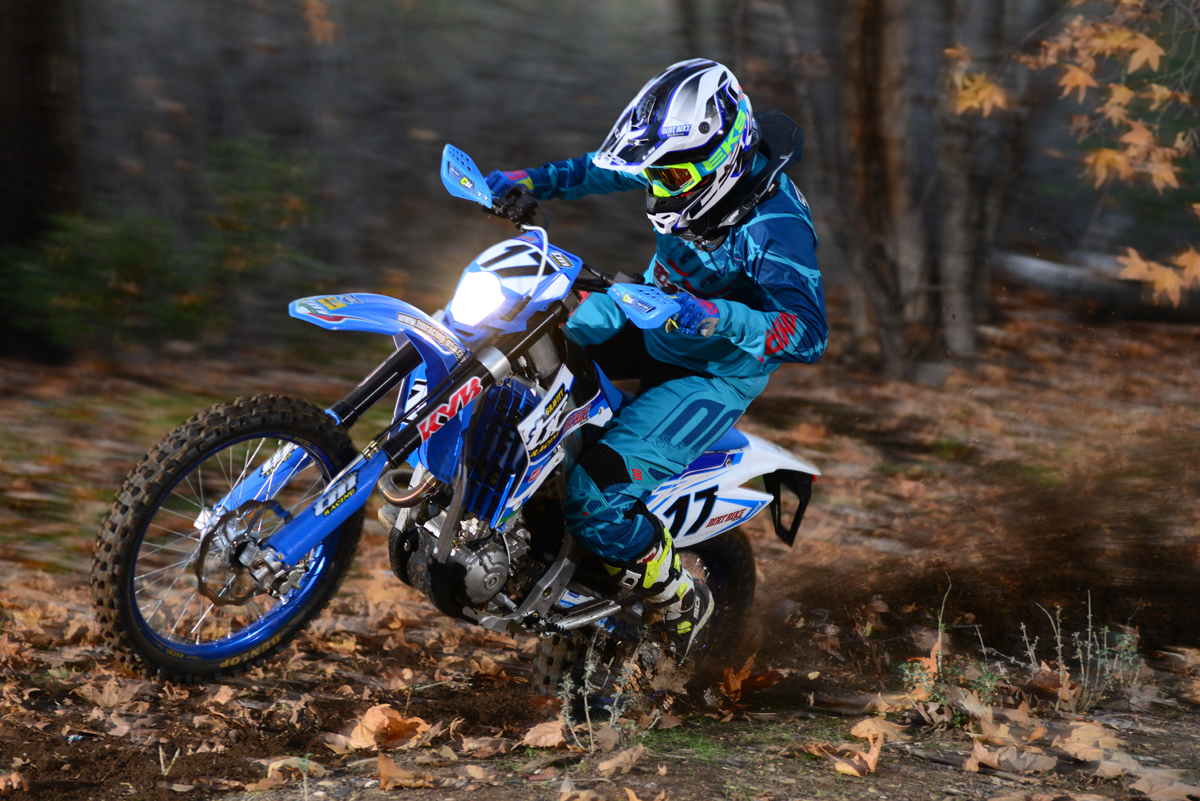 The TM450E, which will be featured in the March, 2017 issue of Dirt Bike, is probably one of the most sophisticated bike that the tiny company has ever produced. The locations for the airbox and the fuel tank swapped. The frame is aluminum, the fork is a KYB and the shock is actually made by TM. What I like most about the bike is that it’s a real off-road bike, not just a repurposed MX bike. The gear ratios work for the trail and the power delivery is very smooth. We still have a lot of testing to do on the bike, and a lot to learn. 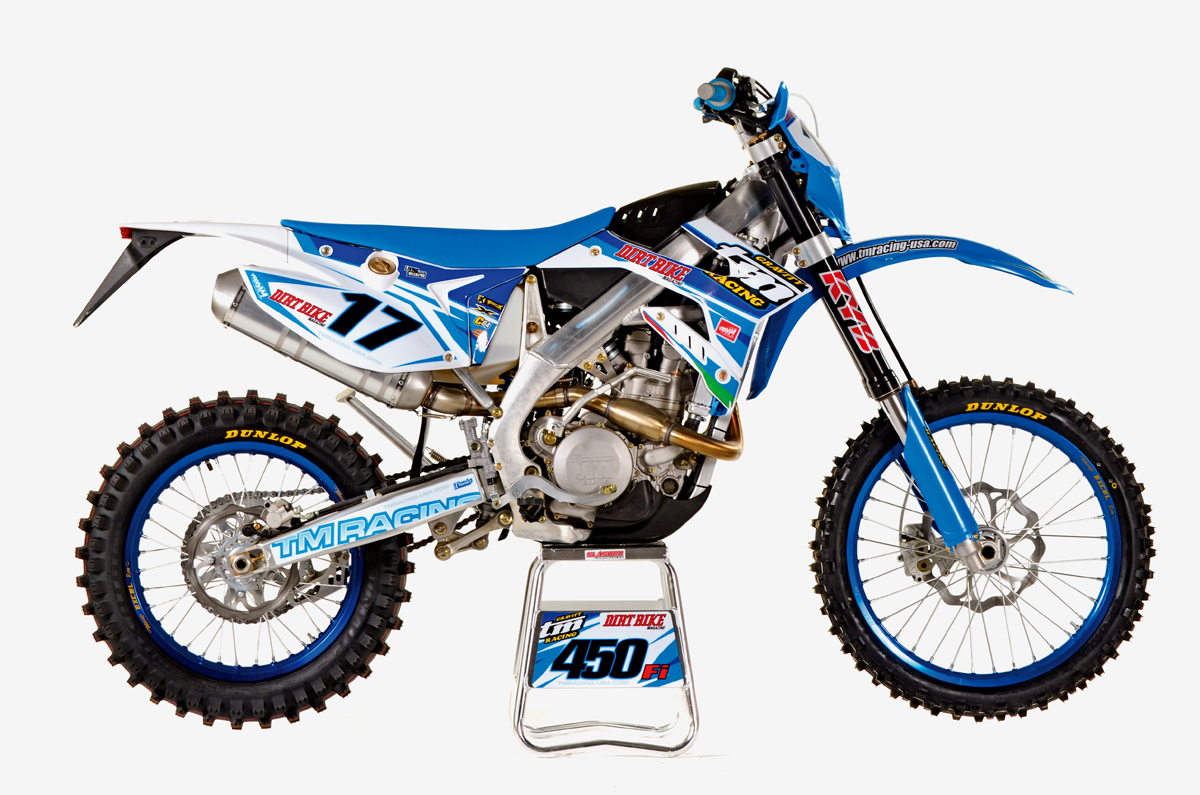 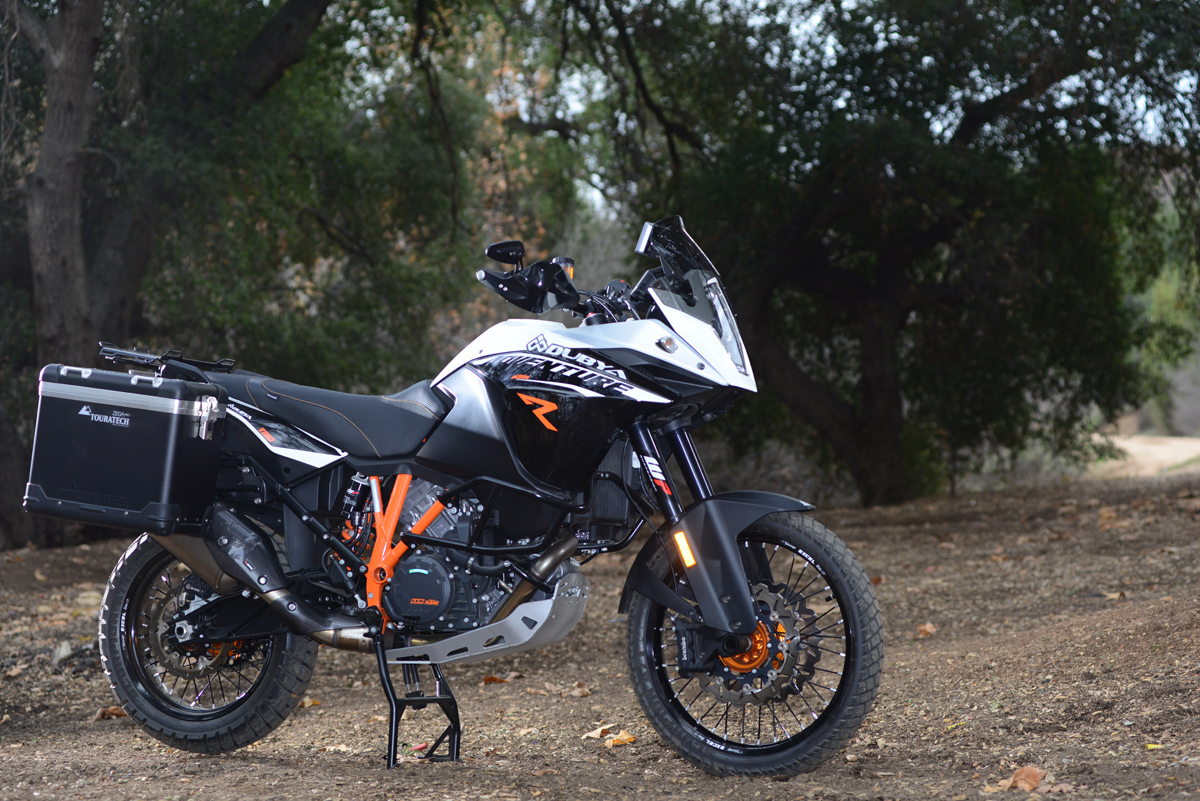 The March issue will also feature a look at John Anderson’s KTM 1190 Adventure. John is the main man at Dubya Wheels, and we’re delighted that he’s embracing the adventure bike market. Like we’ve been saying for years, if you own an adventure bike, you’ve got to have an extra set of wheels. Otherwise you spend all your time changing tires. This particular bike is interesting because it’s been discontinued in the KTM line, as of 2017. The replacement is the new 1090, which is said to be more dirt-oriented. It still makes us want to run to a KTM dealer and get an 1190 before they’re all gone. 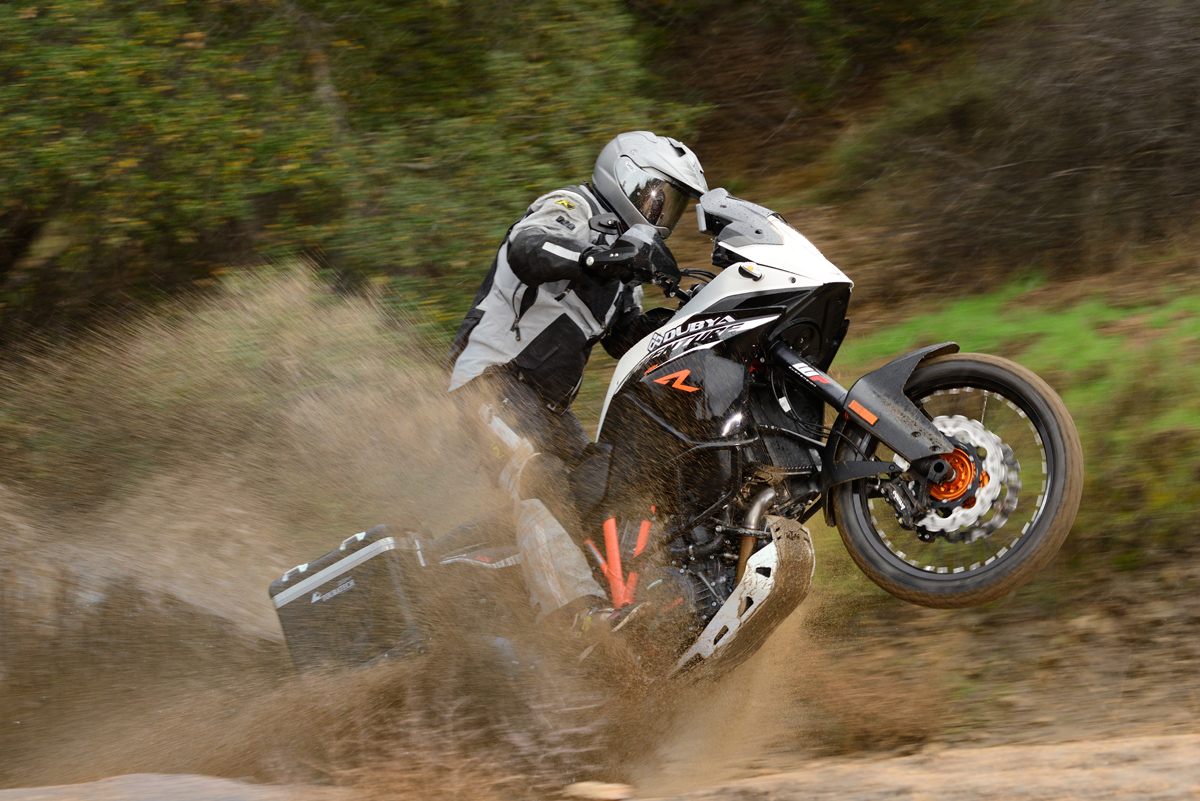 I shot this photo of Mark Tilley on John’s bike in a pouring rainstorm this week. Mark made me promise not to leak it out until he had a chance to detail the bike afterward. I like the photo too much not to show it off. So, John, if you see this before you see your bike next time, Mark owes you lunch. I just took the picture. 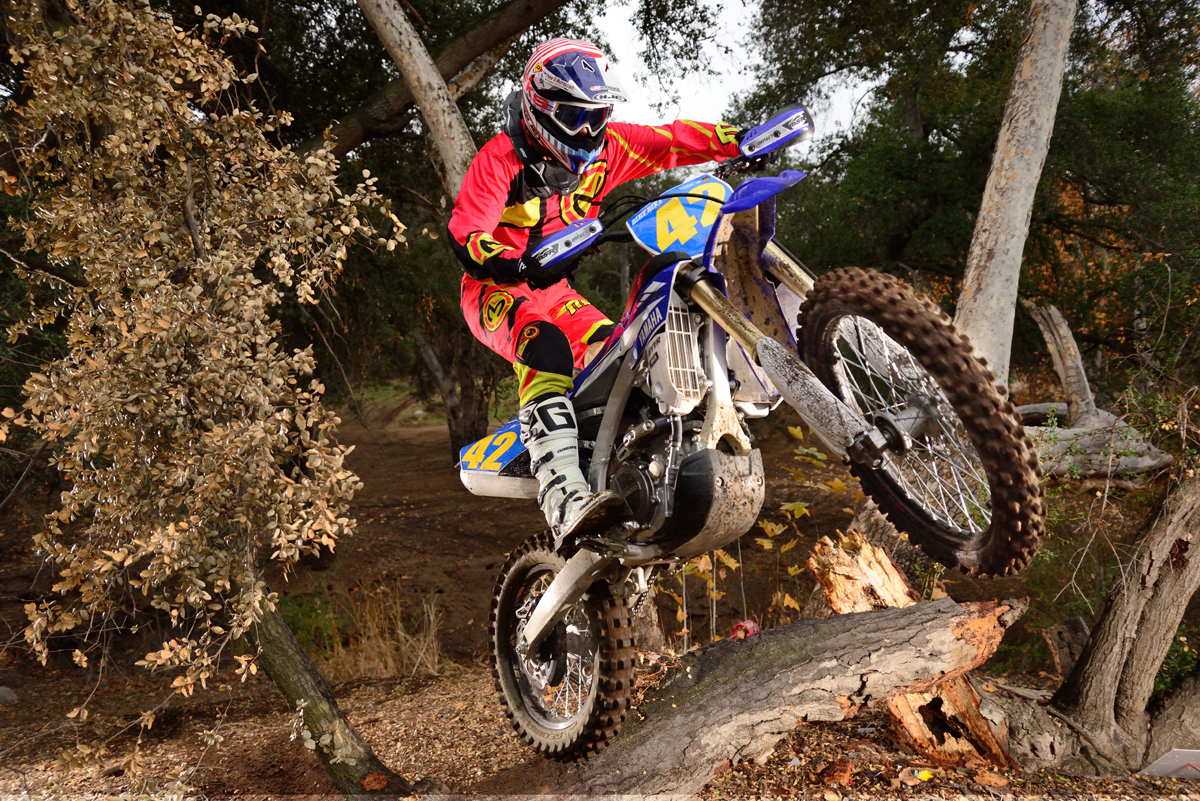 Wednesday we had a bunch of 450 off-road bikes out on the trail. Pete Murray has turned into my go-to rider when I need to shoot a Yamaha YZ450FX (he was on the March, 2016 cover riding one), so I shot him again. Old habits die slowly. We still love the bike. The real test will come when we line it up against the KTM 450XC that we just picked up. We’ve already tested the Husky FX450 and the Honda CRF450RX, and that means it’s time for an off-road shootout! The one bike that will be late to the party is the Beta 430 Race Edition. In the past, these bikes are sold out before we get a chance to test them, but Tim Pilg at Beta stole one from a dealer allotment so we could have it for the test. Maybe I shouldn’t have said that. The other four-stroke Betas we’ve tested this year are all dual-sport bikes, but all the machines in the impending shootout will be closed-course off-road machines. 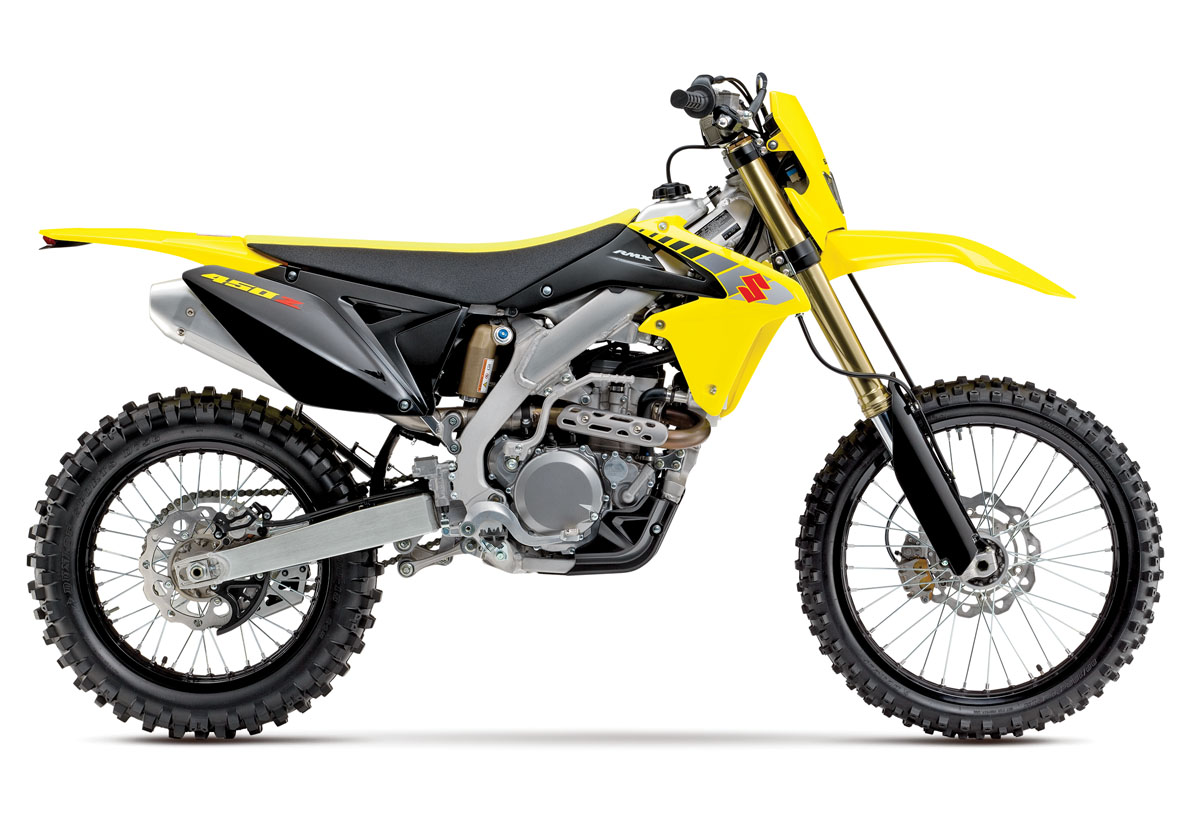 Suzuki released its new 450 off road bike this week, but it deserves separate attention and won’t be thrown into a shootout. That’s because the new Suzuki RMX450Z is one of a vanishing breed. It’s a certified off-road vehicle, eligible for a California Green Sticker. The only other 450s to meet this criteria are the Honda CRF450X and the Yamaha WR450F. Suzuki released this very bike in 2010, but got in big trouble with the California Air Resources Board because the EFI system was too easy to modify. This one has an embedded EFI map that’s said to be acceptable both for off-road guys (like us) and the government. It comes stock with a throttle stop that virtually all riders will want to remove. There’s also a baffle in the baffle and an airbox lid. We’ll test it with and without those last two pieces, but I can’t promise that we’ll ever ride it with that throttle stop in place. Sorry. Unfortunately, any modification like that will render it a closed-course bike. 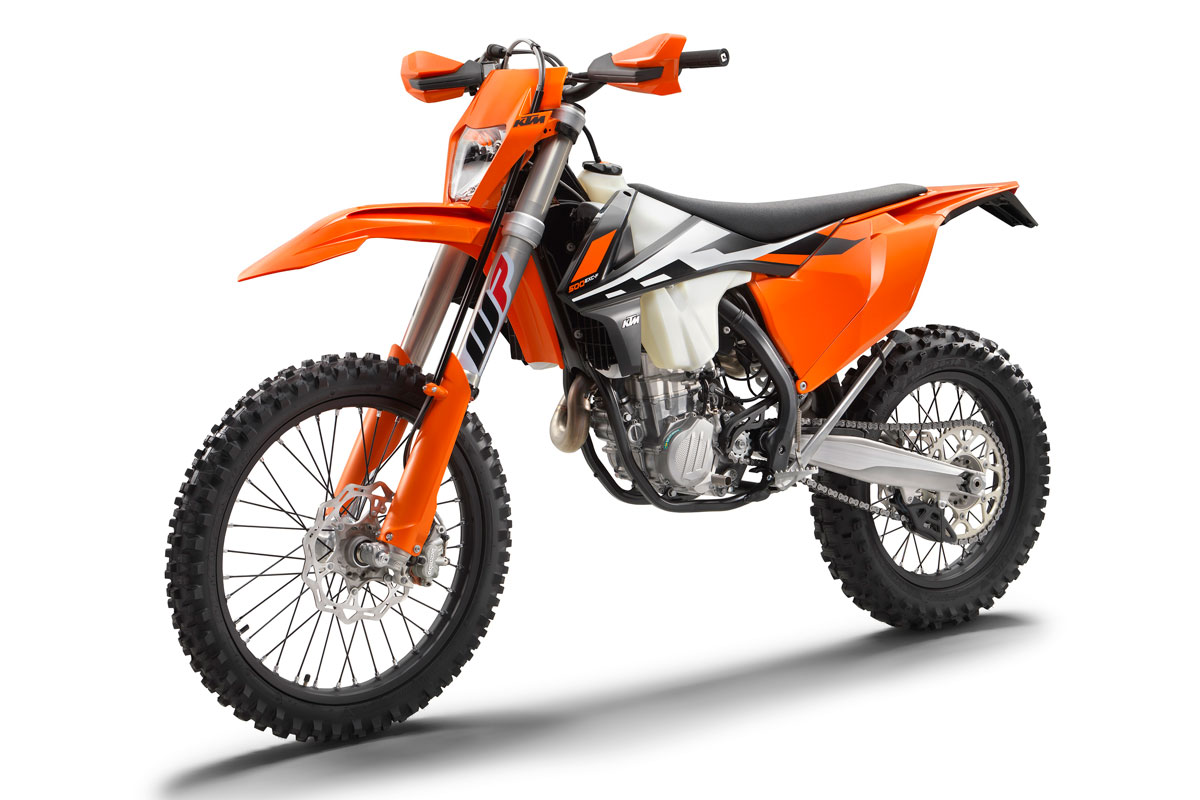 Remember about five months ago when we got first word about KTM’s new dual-sport bikes? They were said to be all-new from the ground up, just like the MX bikes had been the previous year. Well, the bikes have been under lock and key for all this time. The EPA was working its bureaucratic magic again, doing a deliberate work slow-down. In the wake of the Volkswagen scandal, homologation paperwork was stalled at the federal level. Now, we just got word that the first bikes will arrive at dealerships before the end of the year. We won’t get one until the middle of January, so the tables have turned, and we’ll be getting the first impressions of the bike from owners and dealers.

That’s all for now. Merry Christmas!

BACK IN THE DAY: ROLF TIBBLIN & HUSQVARNA