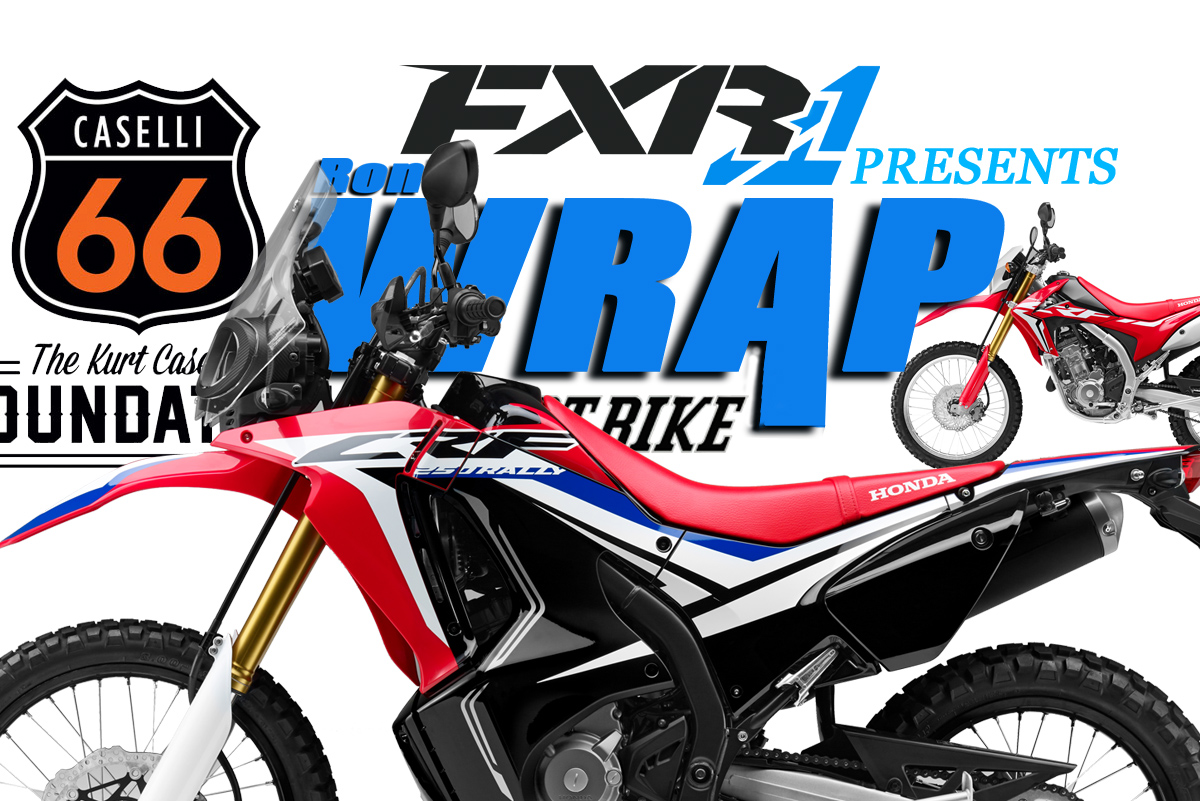 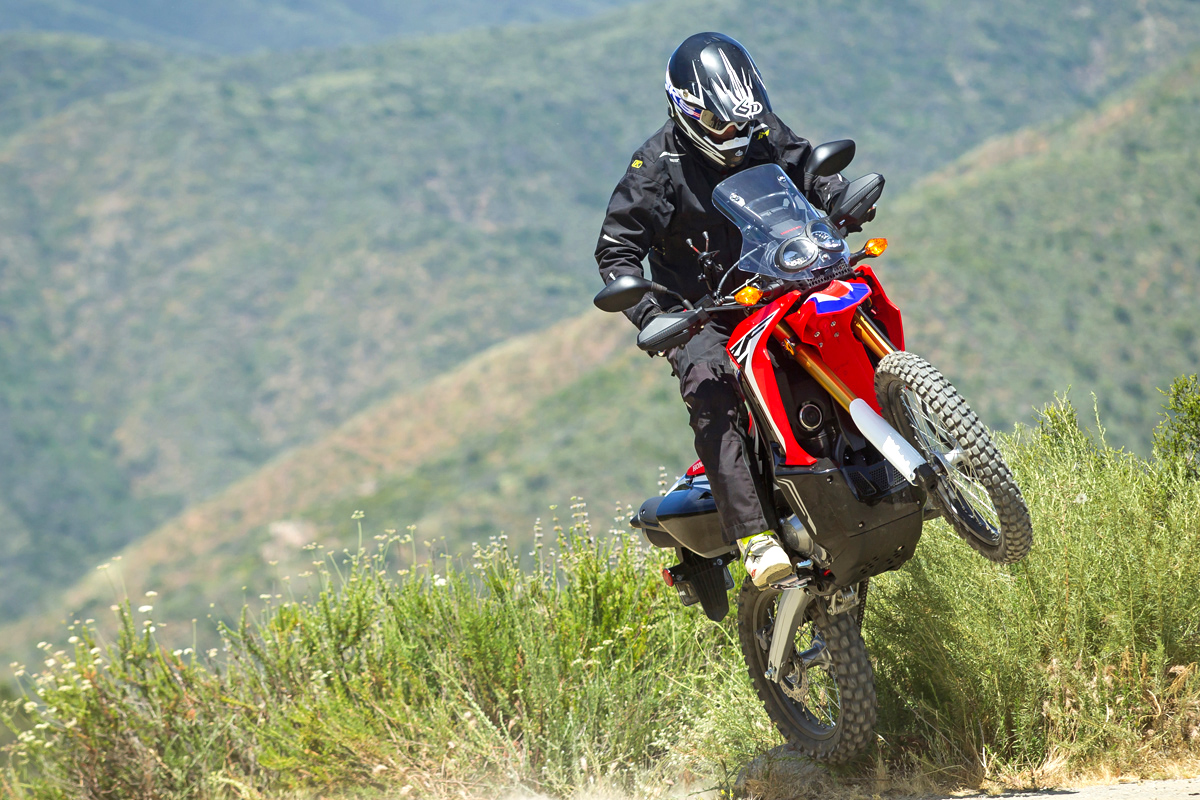 This week was dominated by the release of the Honda CRF250L Rally as well as the standard 250L. The Rally is one of those bikes that no one really gets excited about until they hear the price. The MSRP of the standard will be $5249. The Rally will be $5799.  If you look closely at the bike and repeat the price a few times it becomes more and more interesting. Even unbelievable. From the outside, there’s no indication that the Rally is anything but a premium adventure bike. Most people even say it looks better than the Africa Twin.  The bike has a full fairing and the motor is completely enclosed. There’s a radiator fan and longer suspension, too. 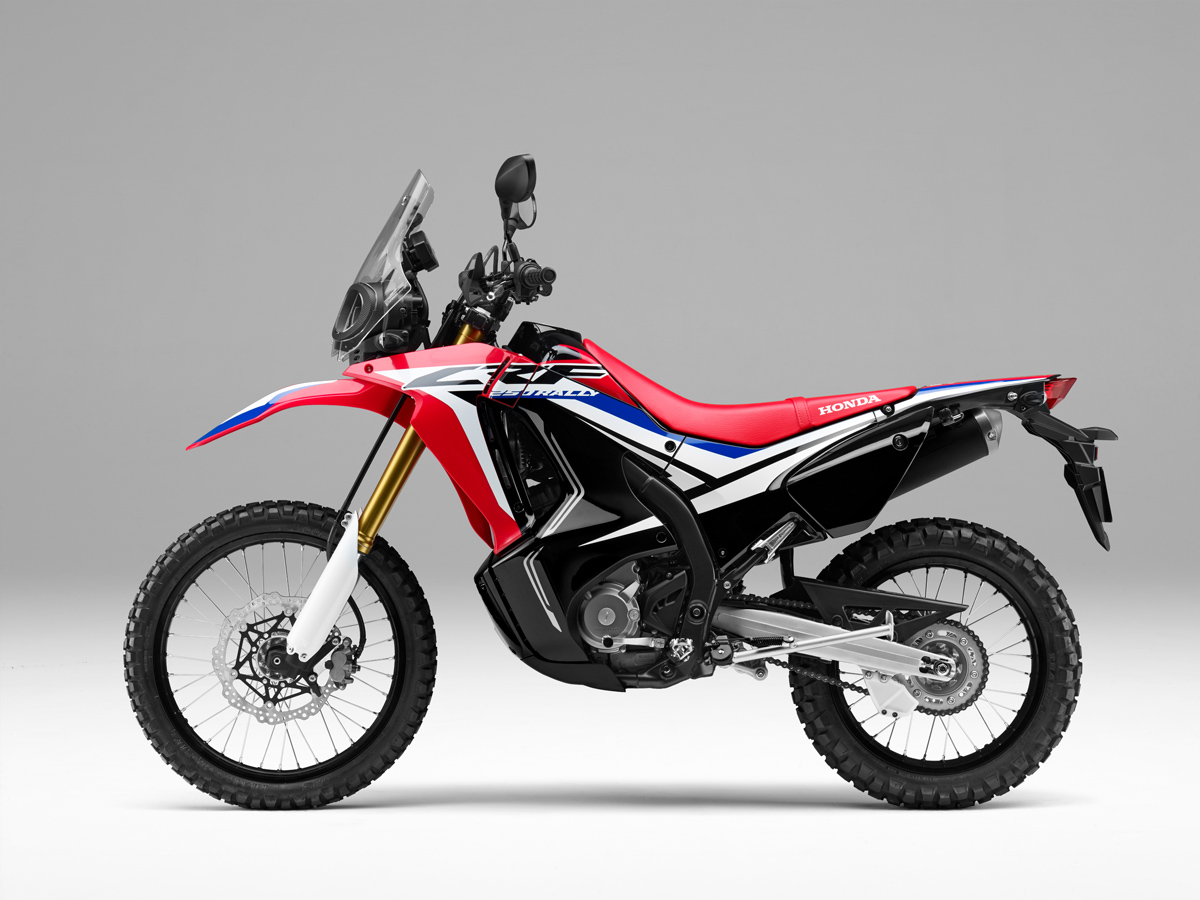 The good news is that you can shamelessly hang out with your BMW buddies who paid over $20,000 and do all the same rides, go to all the same places. The bad news is it will take a lot longer. The 250 Rally isn’t fast, it doesn’t have very good suspension and doesn’t have great brakes. It performs about how a $6000 should perform. This market is dominated by bikes that are fun simply because they have so much power they scare you a little bit when you get into the dirt. The little Honda doesn’t do that. It can keep up with freeway traffic and little else. Where it excels is in comfort. The windscreen is good, the vibration is low and the layout is roomy. It’s a commuter bike with a much higher cool factor than anything in its price range. 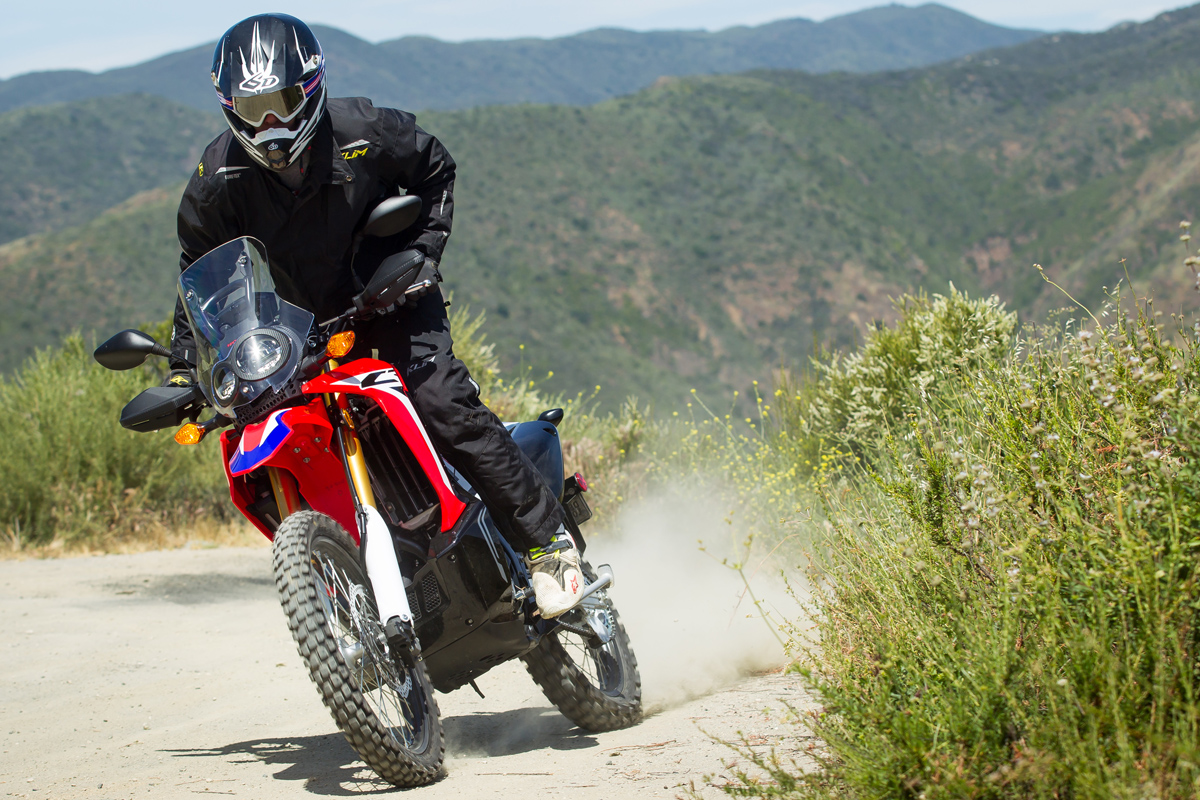 Honda has left some room for aftermarket improvement. We wouldn’t spend a dime trying to make it faster. It would be a tough job and at the end of the day, it still won’t keep up with an Africa Twin. Money could be spent with much better results in suspension. The stock fork and shock have no adjustability and are soft for anyone riding anywhere. Race Tech already has a lot of experience with the 250L, which has much similar suspension. Truthfully, if you spent $1000 on suspension you would still come out ahead.

The new 250L was also released at the same time. It’s more of a purest bike, stripped of about 30 pounds. It still suffers from being a small four-stroke, but Honda did find a little more power this year. We’ll have more on both bikes in the August print edition of Dirt Bike.

Two weeks ago we rode the KTM 1090 Adventure R for the first time. One of the most impressive aspects of that machine is that it has traction control that actually works in the dirt. KTM just released this video that has an excellent graphic presentation of traction control at work.

In case you haven’t heard me say it before, Jacob Michna’s videos of the Kenda SRT Hare Scrambles West series are epic! Other off-road videos are just random shots with music, but Jacob does a fantastic job of covering the race and telling the story. This is very hard to do without multiple camera crews and lots of manpower, but he pulls it off. The Honey Lake coverage is typical. The series itself if the best it’s ever been and this year the points chase in the Pro class is tight, with EnduroCross rider Max Gerston on top.

Max is a great rider and a friendly guy. Watching him get out of his comfort zone with all sorts of different types of riding has been fun. He always puts on an impromptu show on the start line, with wheelies and stoppies. Plus, he has a great cowboy hat! So far he has yet to win the overall at a Hare Scrambles, but he’s close. 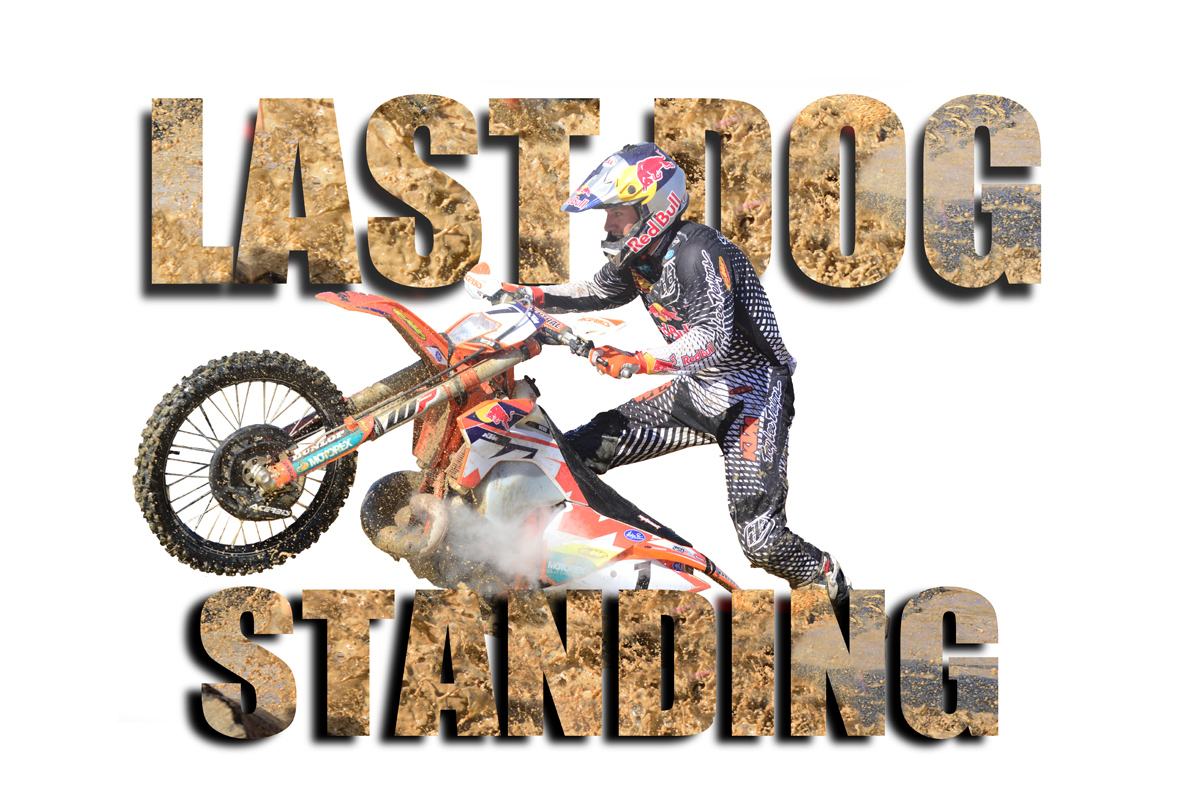 EnduroCross and the Last Dog Standing Extreme Enduro are now partners. Craig Hunter, who is the man behind the Last Dog Standing and the Prairie Dogs MC, called to report that the two bodies will cross promote each other starting this year. This makes sense. It will help EnduroCross’s amateur program and improve visibility of the LDS. We are big fans of both organizations, and have helped with the Last Dog on a volunteer basis since its inception. AMA Off-Road Racing Manager Erek Kudla is considering making the LDS a State Championship event.

The Abu Dhabi Desert Challenge is what Dakar used to be. Sam Sunderland just won it, proving that he deserved his Dakar victory earlier in the year and establishing himself as the top rally rider in the world.

The American Motorcyclist Association supports President Donald Trump’s decision announced Wednesday to order the review of all national monument designations that are greater than 100,000 acres made by administrations during the past 21 years under the American Antiquities Act of 1906.

“We believe that past presidents have overstepped the bounds and the intent of the Antiquities Act by designating far more land as national monuments than was necessary,” said AMA Vice President of Government Relations Wayne Allard. “We applaud President Trump’s order to review these designations and hope that some of these boundaries can be reduced with input from local residents and officials.”

The AMA supports legislation that would require local approval. Under President Trump’s directive, Zinke has 45 days to submit interim recommendations and 120 days to submit suggestions for legislation or recommend that the president reduce the size of monuments larger than 100,000 acres or rescind the designations altogether.

The legal power of a president to rescind monument designations is uncertain. But some presidents have used their authority to resize monuments designated by previous administrations. 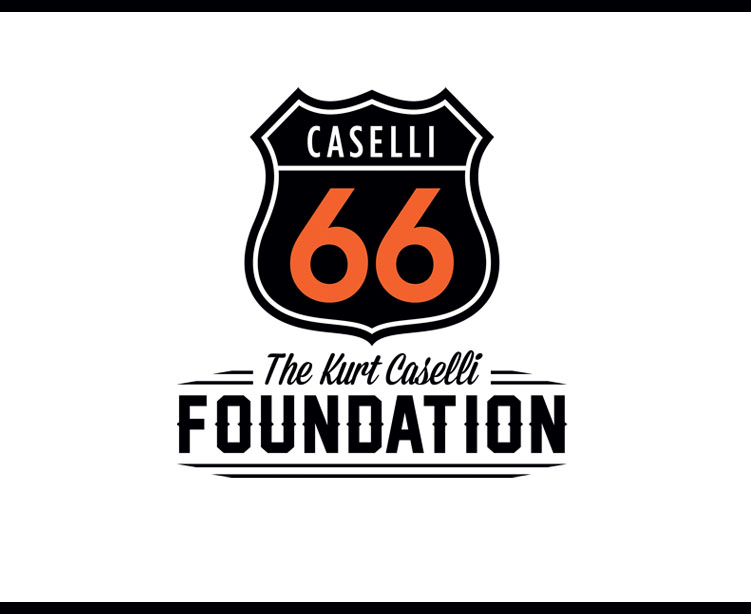 The Kurt Caselli Foundation (KCF) is just days away from the Fall 2017 Kurt Caselli Memorial Scholarship gift deadline of May 1st. Whether you are a current or former racer, this is your chance to further your education with assistance from the Foundation that was created in Kurt’s memory.

The Kurt Caselli Memorial Scholarship was created to award gifts of $2,500 to two current or former racers who are currently enrolled in institutions of higher learning. The KCF is looking for applicants who embody perseverance, integrity, generosity, commitment, humility and professionalism – all the same character traits that Kurt Caselli exemplified on and off the motorcycle.