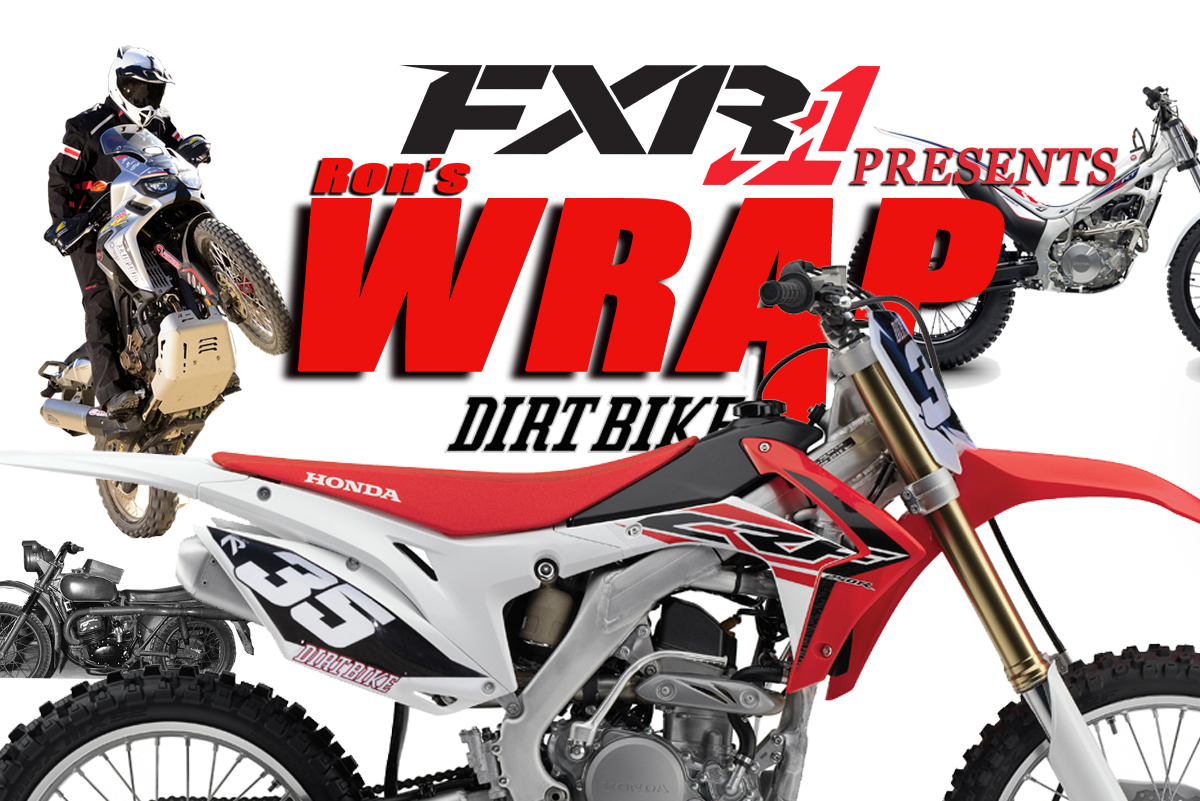 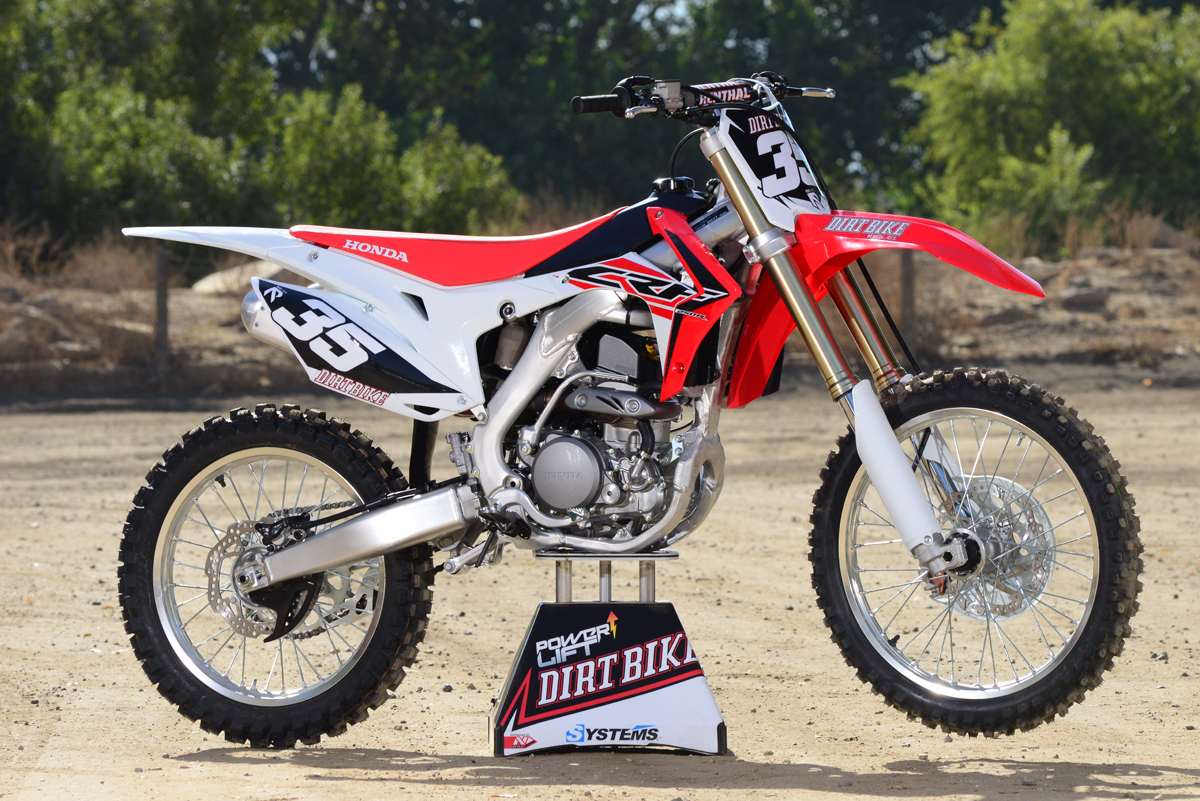 Lost in the tidal wave of Honda news that came with the arrival of the new CRF450R and CRF450RX was the release of the 2017 CRF250R. The reason it didn’t see much press is simple; it’s unchanged. Not even bold new graphics. We took a little time this week to get reacquainted with the bike. Recently, the Honda 250 hasn’t done well in shootouts because it feels slower than most of the others. On peak, it gives away about 5 horsepower to the KTM and  Husky. But what goes unnoticed to most pro and intermediate riders is that below 8000 rpm, it’s actually much stronger than any other 250F. According to last year’s dyno figures, which were measured for us at Bill’s Pipes, the CRF250R has a 2 horsepower advantage at 7500 rpm–over everything else in the class! That makes it great for guys like me. I can’t make myself scream a 250F the way Jeremy Martin does. 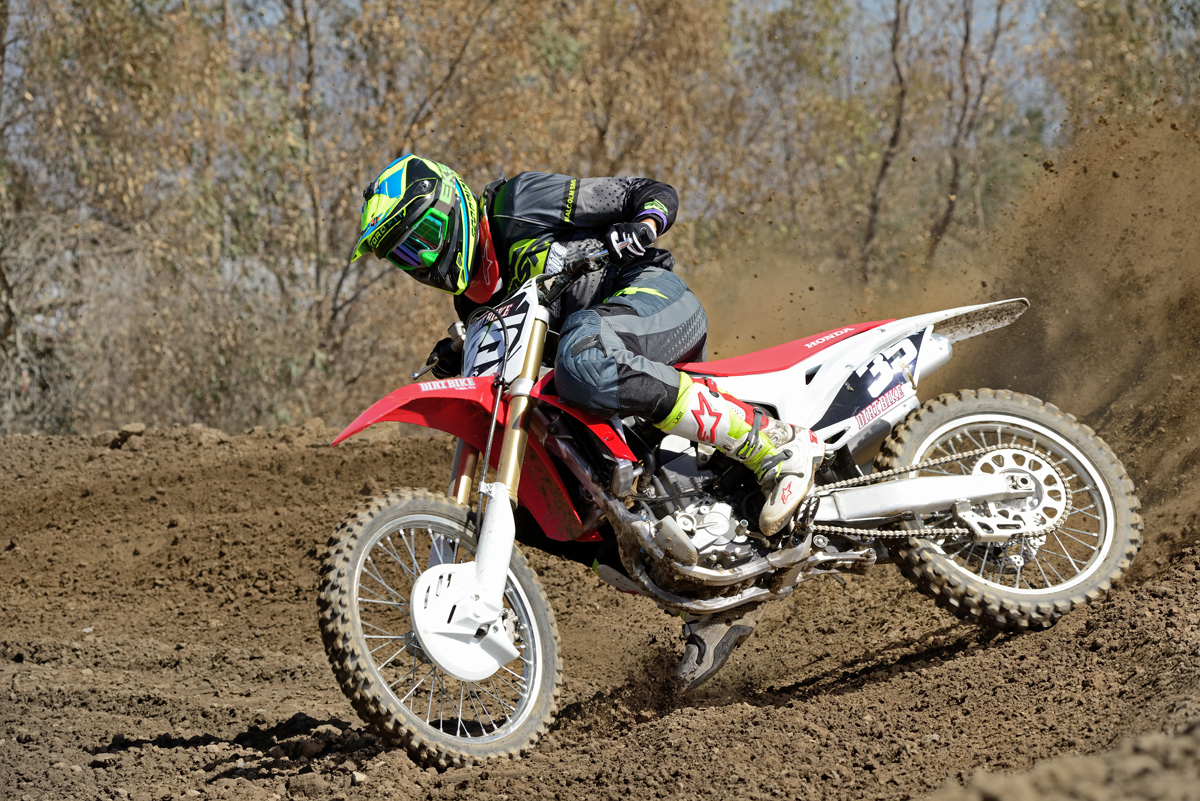 The Honda still weighs 222 pounds without fuel, which is the same as the Yamaha and one pound heavier than the new Kawasaki. It still has the twin exhausts, which makes it quieter than other 250s, adding to the perception that it’s not fast. There are two EFI maps available through a handlebar-mounted switch (everyone likes the more aggressive one), and the fork is the Showa SFF Triple Air. Getting the fork dialed in is pretty tricky. We lowered the inner chamber and increased rebound damping. Honda is hyping the fact that the new 450 has coil-spring fork, so we will be surprised if the same thing doesn’t happen to the 250 next year. For now, it bike is great for most riders, but needs engine work for the pro ranks. We know that the power is in there. Jeremy Martin seemed happy with his last week end at the USGP. 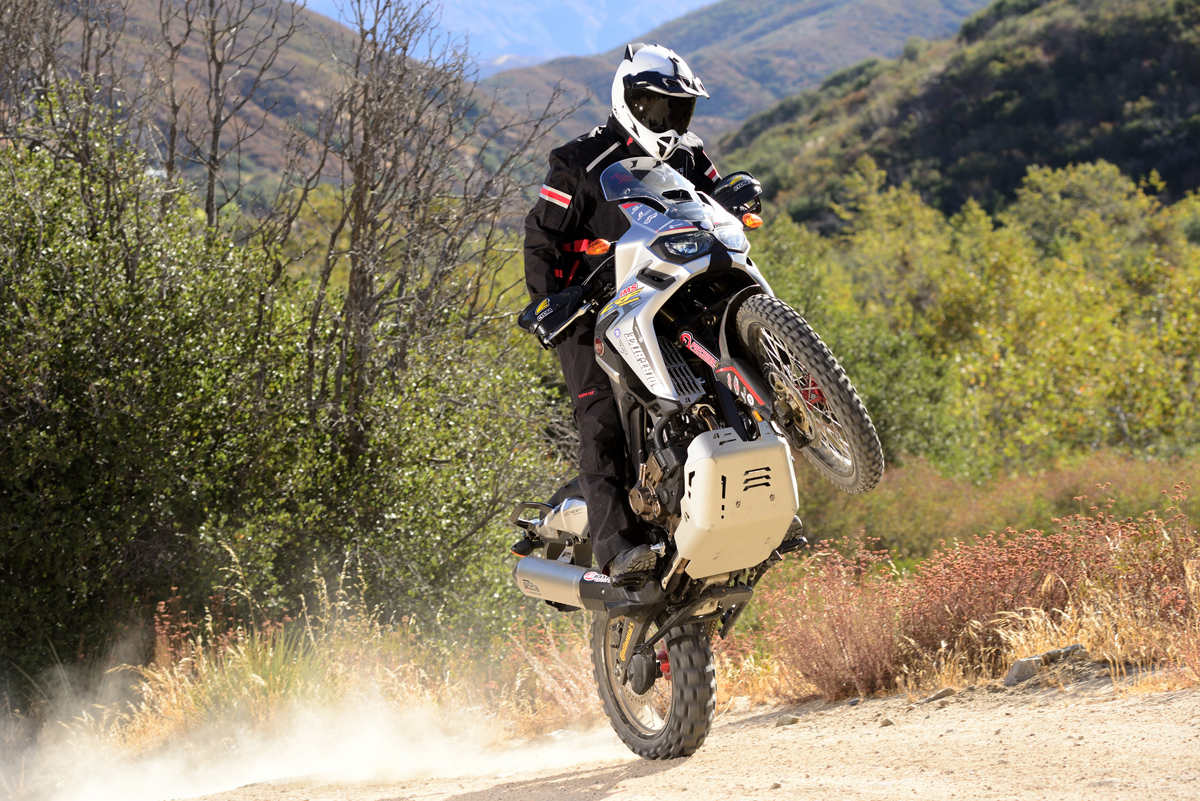 Earlier this week, Mark Tilley and I got to check out Scott Wright’s IMS Africa Twin. Right now, the Africa Twin is the most exciting thing to hit the adventure bike scene, and it seems like everyone is building one up. It’s probably the most dirt-worthy of the big adventure bikes, but we’ll have to wait to see how it stacks up against the KTM 1190 Adventure later in the year. The IMS bike was designed to be really ridden in the dirt. It had Conti TKC80 tires, suspension that was reworked by Precision Concepts, IMS Adventure pegs, a GPR stabilizer and a Yosh exhaust, among other things. We took it to the San Bernardino mountains and promptly got lost and dirt roads that we thought we knew. Good times. Look for the story in the December issue. 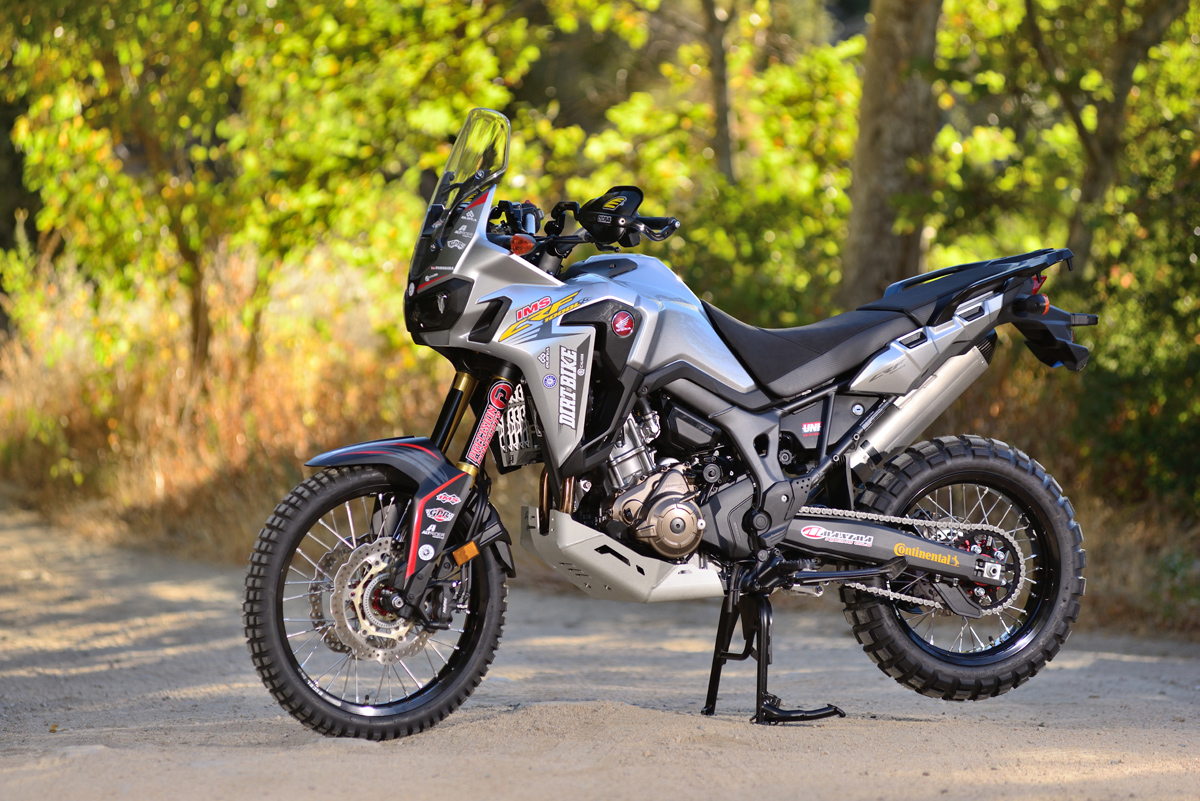 American Honda just announced its lineup of 2017 Montesa trials motorcycles with the Cota 300RR and the Cota 4RT260. Introduced last year, the Cota 300RR was made for competition (the “RR” suffix stands for “Race Ready”) and is the production model most similar to the prototypes used by factory Honda Montesa riders. For 2017, the 300RR has new ECU mapping that improves engine response in the low and middle rpm ranges that are especially important for trials motorcycles. Another aspect that contributes to engine response is the new three-ring piston (up from two), which helps prevent leakage and improves durability. The piston is now lighter and has a flatter top, reducing vibration and making combustion more efficient at low rpm. The cylinder has also been redesigned to match the new piston, further improving engine efficiency. The chassis has also been updated, with new, suppler settings for the Tech fork, similar to those used by factory riders. Finally, the muffler is more robust with reinforced mounts, and the rear-brake pedal has been shortened to avoid impacts and allow the rider more freedom of movement. The price is $9,999. Availability: December 2016

Montesa Cota 4RT260
The 4RT260 was first introduced to the U.S. market in 2015. The 2017 version also has the longer kick-start lever from the 300RR, making starting easier. The 4RT260 retains the reliable 260cc four-stroke engine that was updated last year. A clever crankcase decompressing system reduces the engine-braking effect at closed throttle, improving handling and making the bike feel lighter. Also standard is top-level suspension, with a fork from Tech and a shock from R16V—both well known in the trials world. The price is $7899 and it will be out in November, 2016. 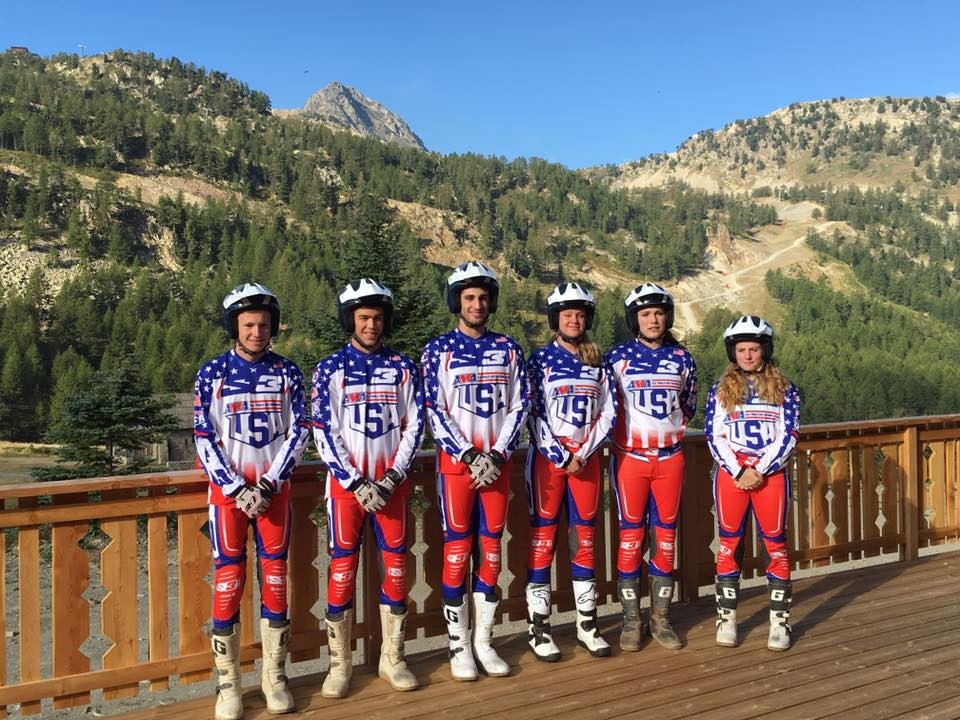 The 2016 U.S. men’s team clinched fourth place in the Trial des Nations International Trophy Division on Sept. 11 on a two-loop course totaling 36 sections in the French and Italian Alps. After the first loop, the U.S. men’s team of Andrew Putt, Bryan Roper and Daniel Blanc-Gonnet was tied for second place with Sweden, with just 3 points for the 18 sections. Germany was in the lead with a single mark, and the Czech Republic was holding at 4. A few minor mishaps on the U.S. team’s part added 6 to the score for the second lap, leaving the team with 9. This allowed the other teams to edge out the United States and put the U.S. team 3 points behind third place.

“The amount of determination, precision and teamwork displayed by Blanc-Gonnet, Putt, and Roper should make our country proud,” said Team Manager Todd Roper.

The U.S. women’s team of Madison Leigh, Kyle Sweeten, and Sadie Webb encountered some trouble and placed 10th. With Webb sick and Leigh injured, the pressure fell on Sweeten. This was the first time competing in Europe for each of the team members.
“Trials competition at the international level is intense, and we are proud of the men’s team that was able to secure fourth place,” said AMA Director of Racing Bill Cumbow. “While the women’s team faced challenges this year, we are just as proud of them and hope that the team will return to the competition next year stronger than ever.”

The event was sanctioned by the Fédération Internationale de Motocyclisme.

The support of sponsors is crucial to the ability of the teams to compete. For 2016, sponsors included: AIReS Relocation Services (Bryan Putt / www.aires.com); Specialty Welding and Machine (Sid Maulden / www.swmtx.com); Integrated Solutions Inc (Ropers / www.isiaz.com); Ryan Young Products (Ryan Young / www.rypusa.com); and the motorcycle manufacturers and importers. Special thanks go to Martin Belair (www.usmontesa.com) for representing the U.S. as the FMN Delegate and Bryan Putt for making sure the team has all the necessary tools at the event.

At the end of 1964 Husqvarna  got a request from an old client–the Swedish Army. The  brand got its start making firearms for the military, and then sold some bikes back in the ’30s, but now it was a serious order – the military asked for a quote for 5000 machines.

At first, a prototype Husqvarna was built up to specifications and demands of the military. Among other things machines needed to be able to have skis attached, which was nothing new to the R&D department at Huskvarna. During 1965 this new bike was tested under severe conditions, needing few modifications. Among other equipment was a tank bag and a rear rack to accommodate extra material. Husqvarna began production and was ready to deliver at the beginning of 1966, when politics set in.

The new model, named MC 256 A, was stalled on the production line. In the meantime, customers in the United States demanded more delivery and the importer Edison Dye decided to take advantage of the situation. He had a Sportsman version imported to the USA. One that was nearly the same machine as the 256 A, but, of course, without the skis and other unnecessary equipment.

As the time of delivery to the military grew closer, the order diminished to a fifth of the original figures. No more than approximately 1000 of the 256 A machines were delivered for terrain purposes in the military.

But the “Request for Proposal” did not only go to Husqvarna, but also to other manufacturers such as Monark and Hägglunds who were working on other heavy duty military projects for the government. The new military thinking included details such as an engine that kept running while the machine was lying on its side. Also, that the wheels would be built in such a way that made it as easy as possible to change them. It was also requested that the front and rear wheel would be interchangeable. A further thought was a bit more improbable – the government’s people asked that the engine be easy to start even after three to five years in storage! Last but not least… the newcomer had to be equipped with an automatic gearbox, as inexperienced riders would also ride the machines. This time, the size of the order was 3,000 units, to be delivered by the end of the 60s.

Developing a suitable new machine, three manufacturers went into further discussion with the military. Besides Husqvarna, Monark and Hägglunds were also in the race for the attractive contract. During testing sessions, it turned out that none of the prototypes were good enough to pass the request list. A second round was initiated, but now Monark withdrew their interest giving Husqvarna and Hägglunds the chance of building improved prototypes. The new machine used an automatic gearbox with a centrifugal weight clutch and freewheel for each gear. This way, the selected gears were depending on the speed of the rear wheel. The construction consisted of a gearbox with only three gears and worked well from the start of the tests.

The machine was also included in the International Six Days Trial (ISDT) in 1973, which gave the general public a chance to see this latest development from Husqvarna. However, to everyone’s surprise, Hägglunds was awarded the final contract as “they had submitted a most innovative design in their presented prototype”.

Husqvarna did not give up. They had been very successful in the ISDT and so continued developing a commercial machine, which would sell as a street machine with the added benefit of excellent off-road performance. Only a year-and-a-half later, Hägglunds realized that they had failed making a production vehicle from their appreciated prototype. Husqvarna was asked to take over the responsibility for delivery. This came in handy with the developers in Husqvarna and a special group was formed with engineer Tommy Malm leading the way. It took until the fall of 1966 before everything was negotiated from both parties. But further delays and discussions set the final delivery of 1000 machines back to 1968 when the elusive model 256 A was handed over for military purposes.

WORCS; BACK IN SESSION