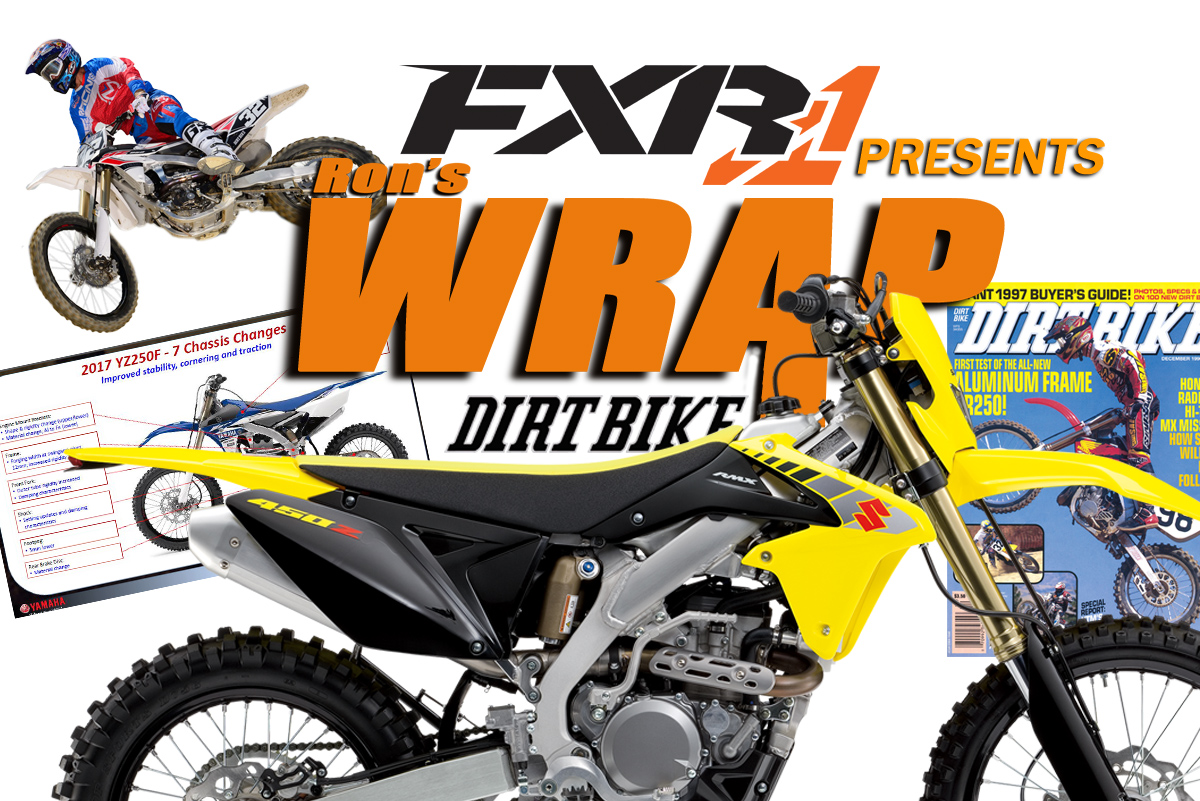 It isn’t often we’re surprised by a new model, but it certainly happened this week. Suzuki announced the return of the RMX450Z off-road bike. This is particularly good news because it shows that Suzuki still has some heart after taking a beating. A few years ago, when the company was already suffering at the low-point of the recession, the California Air Resources Board hit Suzuki with a severe fine, citing emission violations in the then-new RMX450 and the LT-R450 quad. To read the government press release, go to CARB’s website by clicking here.

The bottom line was that Suzuki agreed to pay $3,020,000, and remove the  models from the market. This wasn’t a deliberate violation like the one that Volkswagen pulled. The issue was simply that an embedded alternate fuel map made the motor too easy to modify.

The new RMX is similar to the one that caused the commotion, but updated. It has electric start and is in an off-road state of tune. We’re anxious to try it.

As new bike season continues, we were introduced to the 2017 Yamaha YZ250F and YZ450F this week. Now, our crew of test riders is ready to start doing their thing. The 250 is the one with all the major changes. Here’s the hit list: 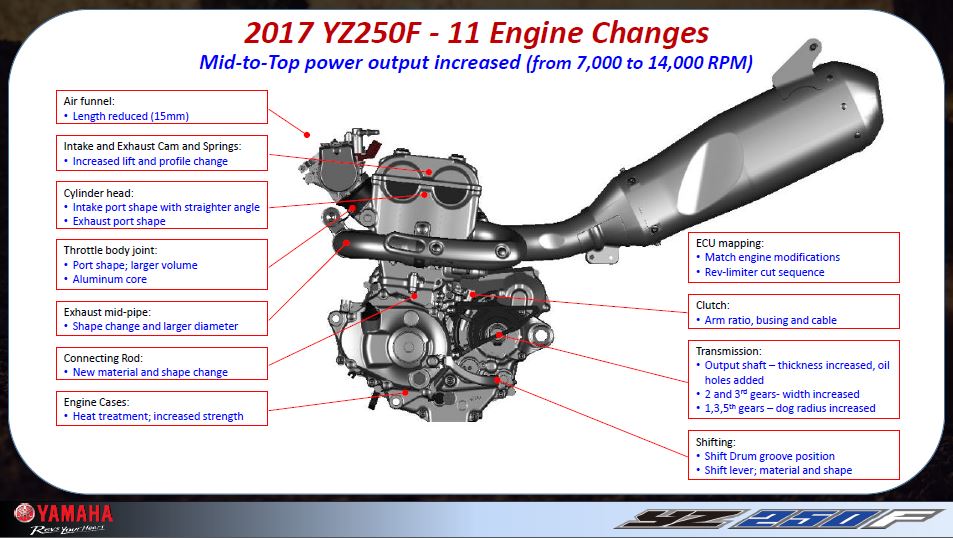 New cylinder head and intake system. The head is a whole new casting with different port configurations and the intake from the airbox to the throttle body is shorter. The cams are new and the valve seats are larger.
New connecting rod and stronger crankcase. The heat treating process for the cases is new and the rod has different oil ports.
Updated transmission. The dogs for 1st, 3rd and 5th have new shapes and 2nd and third are wider. There are a number of smaller changes.
Different clutch disengagement. The clutch arm is shorter so that the clutch disengages more completely, and the cable angle has been reconfigured to make the pull a little easier.
New mapping. The rev limiter cuts in more gradually.
Larger diameter in the mid-pipe. 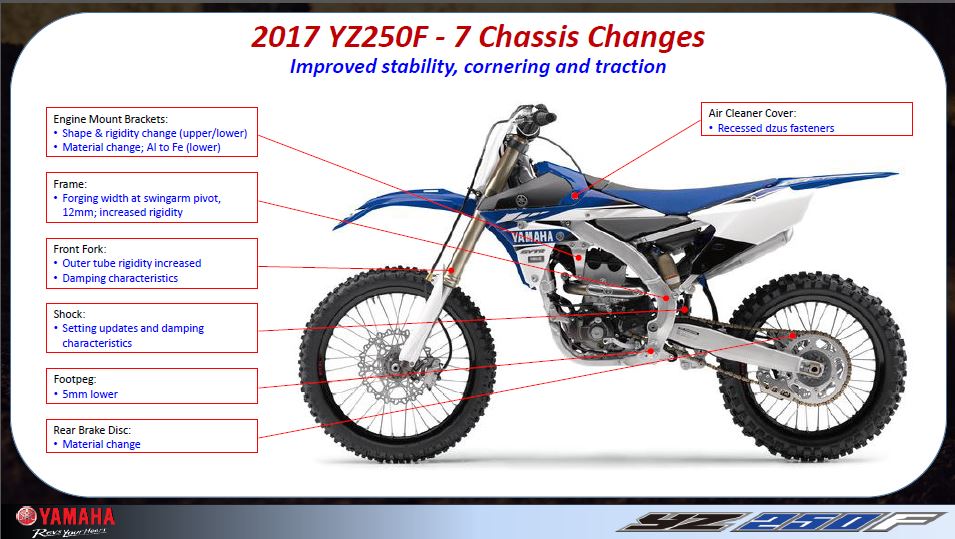 Stiffer frame. The frame members around the swingarm pivot are beefier, on the flip side, the fork upper tubes are flexier.
Different engine mounts. Yamaha continues to play with the engine mount shape and material to change handling characteristics. The lower mount are now steel, rather than aluminum.
Footpegs 5mm lower.
After riding the bike for a couple of days, we can say that some of those changes are noticeable, others aren’t. The rev-limiter, for example, gives the bike a very different feel around power peak. Two years ago, the bike would stop in its tracks at 14,000 rpm. The 2016 was better, and now it’s better still. If you don’t have time to shift, you can scream it without throwing out an anchor.
The suspension continues to be incredible. Okay, some of the credit might go to the frame, but to a man, everyone praises the fork. Springs. You gotta love ‘em.

We already put the bike on the scale, and it weighs 222 without fuel, which is the same as last year’s. It used to be the lightest in the class, but the KTM and Husky come in lighter now. The Honda is the same weight, and we don’t expect it to change this year. The full test of the YZ250F will be in the October issue of the print magazine. Here are some of the outtakes from the intro.

Remember when all dirt bikes had steel frames? Aluminum became common in the street world starting with the 1985 Suzuki GSX-R750, but steel remained king in the dirt for a long time. Then, in 1997, that began to change. The manufacturing techniques used to make street bike frames had been perfected by then, so there was no real increase in cost. Thus, Honda made the move to a radical new aluminum chassis for the CR250R. It was more than just the same old thing made of aluminum. It had twin beams wrapping around the motor rather than a single aluminum backbone. It used a single radiator and a new port configuration, and on top of it all, it had a new twin-chamber fork replacing the old open-bath unit. The 1997 Honda 250 was the fastest and lightest bike of its time, and it stunned everyone.
But, after the initial shock wore off, riders began to realize that something wasn’t right. At first, everyone blamed the new fork. It was harsh! Some riders returned to the old-style fork but couldn’t get it right. Slowly it dawned on us all that it was the frame that made the fork feel harsh, not vice versa. Until that time, it seemed motocross frames were never quite stiff enough. Roger DeCoster, in his days at Honda, was a vocal proponent of making stiffer frames. In 1995, he even built a project bike for Dirt Bike where he massively strengthened a Honda frame and had good results. But, the 1997 production frame went too far. Yamaha, Suzuki and Kawasaki all backed off their plans to make their own aluminum frames, postponing them for almost 10 years. Honda, in the meantime, kept altering the original frame, coming up with at least four generations that flexed in different places and in different ways. Interestingly enough, recent frames have started to go stiffer again, as suspension technology has improved enough to handle it.
That 1997 Honda is one of those infamous bikes that got a lot of criticism, but it was innovative and pushed us forward. Without bikes like that, there’s no doubt that the bikes of today wouldn’t be as good as they are.

See you next week.