FRIDAY WRAP UP: 5 THINGS TO KNOW ABOUT THE 2017 KTM DUAL-SPORTS 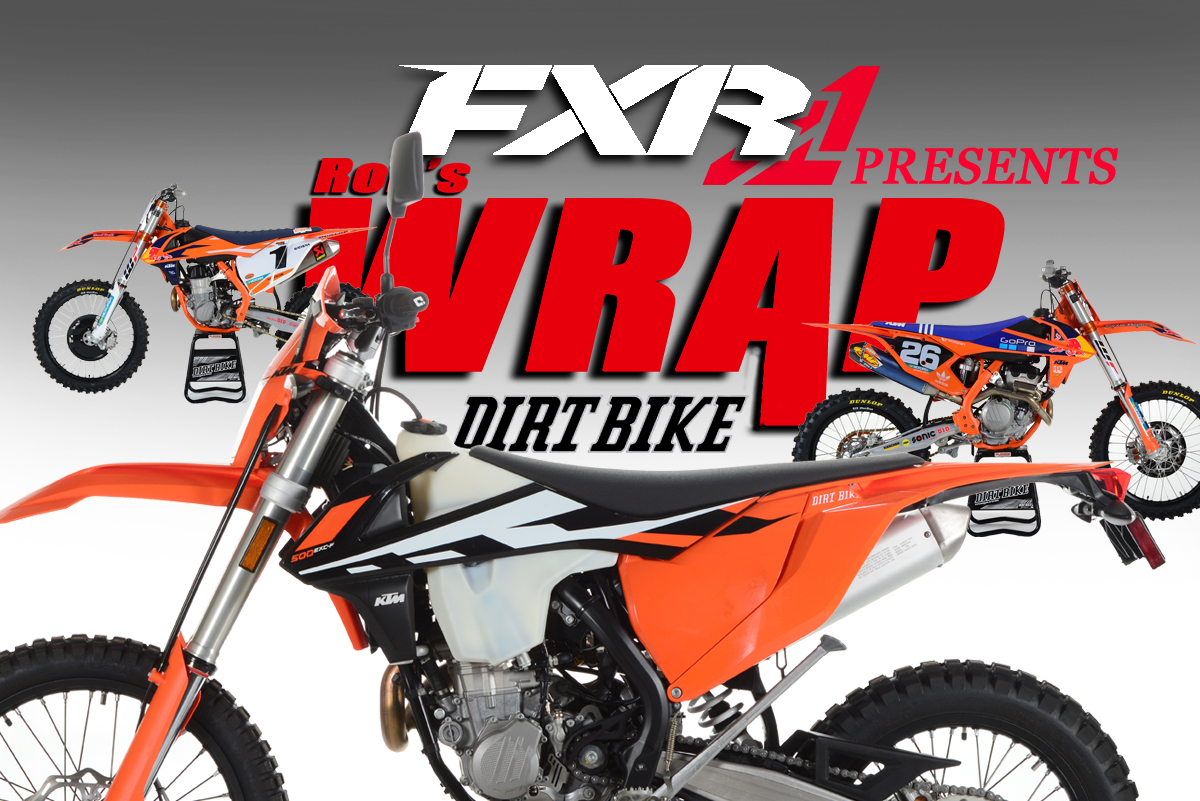 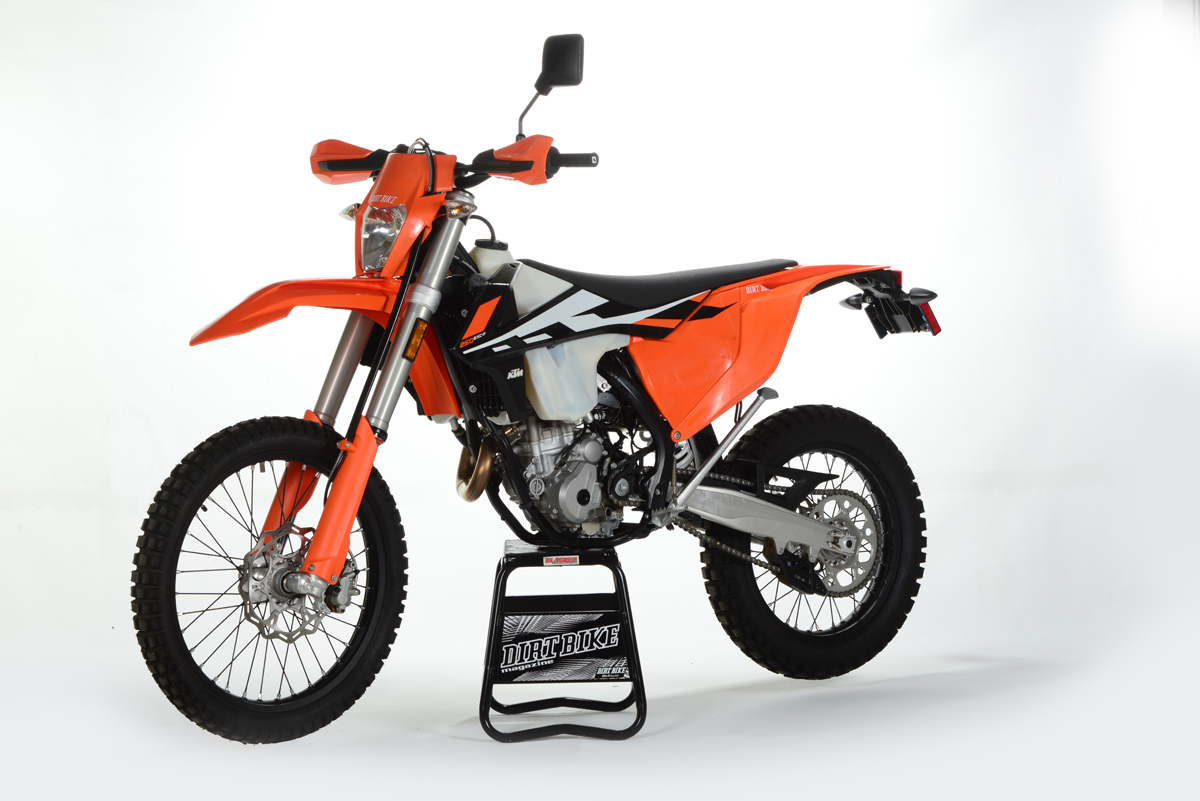 We have finally ridden the 2017 KTM 250, 350 and 500 EXC dual-sport bikes. It took a very long time because the bikes were delayed in bureaucratic limbo for months. They had arrived in the U.S. but couldn’t be sold until the EPA and CARB finished the paperwork. It was all the aftermath of the Volkswagen scandal, which made the EPA want to flex its muscles. 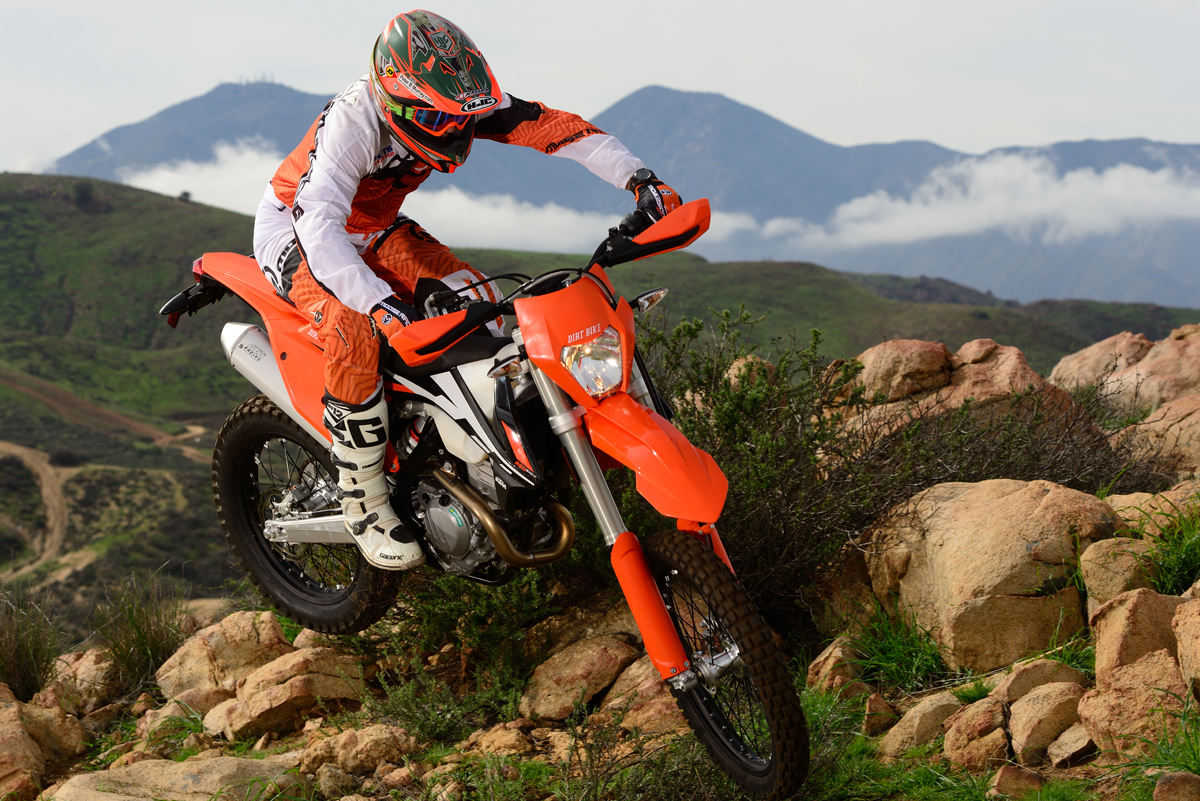 These bikes had become the most eagerly anticipated models of the season. All three have new motors, based on the MX powerplant that was debuted in the 2015 Factory Edition motocross bikes. Now that we have a limited amount of time in the saddle, I figured I would lay out the most important things to know if you’re going to lay out over $10,000.

1: Yes they are that light.

On the frighteningly accurate Dirt Bike scale, the 250EXC weighs 239 pounds. That’s with no fuel in the tank and two mirrors. The mirrors, by the way, weigh a little over a pound together. The 350 is only a pound and a half heavier, which rounded out to 241. The 500 was 244 pounds. They are the three lightest full-size dual-sport bikes you can buy, with the possible exception of the Husqvarna versions.

2: They are super quiet.

What strikes you first is the lack of exhaust noise, especially on the 250. It can barely be heard if you’re more than 100 yards away. KTM worked hard on this. There’s even a reed valve between the air filter and the throttle body to eliminate intake noise.

3: The EFI mapping is spot-on.

In stock form, there’s no problem with flame-outs or back fires. Usually, bikes with EPA-approved fuel delivery are so lean they barely run. These bikes don’t pop, surge or stumble.

The WP Xplor 48 fork is excellent and has coil springs. When you combine that with the lack of weight, these make excellent trail bikes. We still haven’t quite figured out how to set up the new PDS rear shock, which seems to bottom harshly in whoops, but we really appreciate that fact that there’s no linkage to limit ground clearance.

Despite the fact that the EXC models are supposed to replace the old four-stroke XC-Ws, they don’t. They aren’t especially powerful, at least not compared to the corresponding XC models, they don’t have very good tires for dirt and they will be very hard to modify. All have EFI systems that are supposed to be tamper proof, which means that if you replace the muffler or hop-up the motors in any way, you’ll struggle to get any more performance. 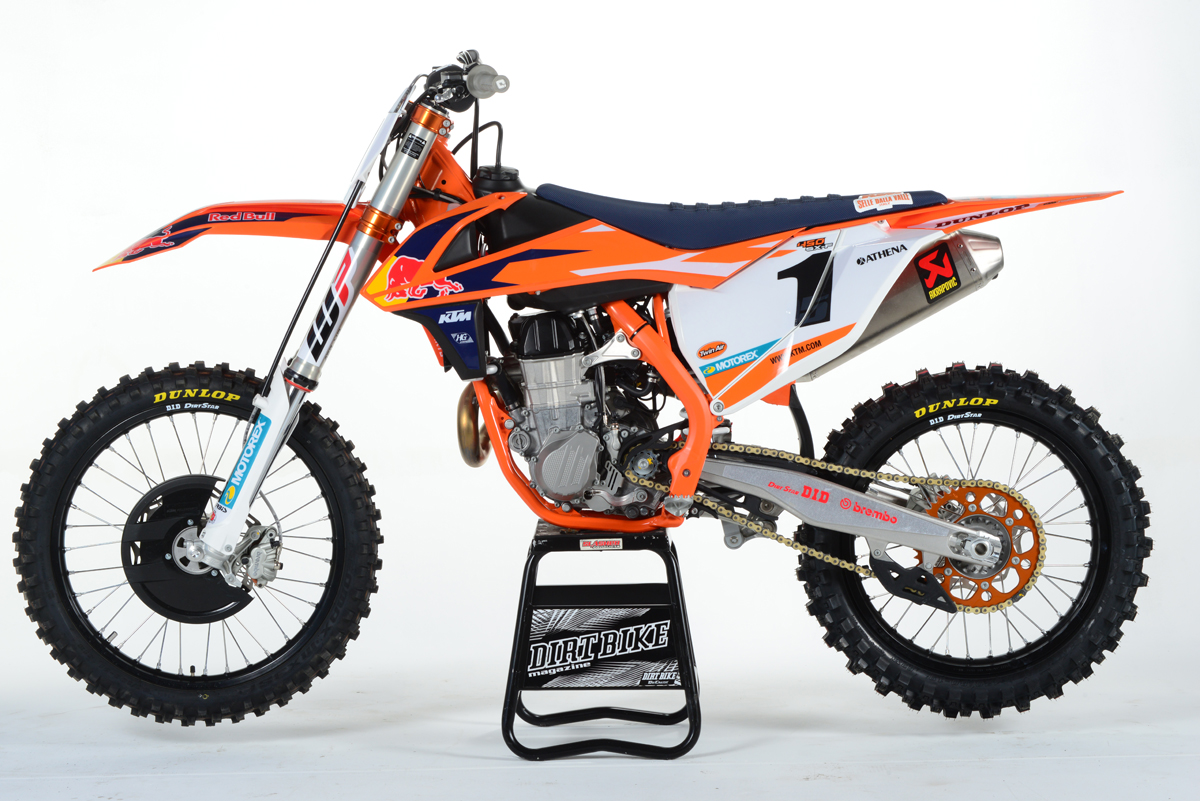 It seems like the flood gates really opened at KTM. We also received the 2017 1/2 Factory Editions this week. They should be sold out very quickly. Usually, the Factory Editions are a preview of technology to come. They allow Dungey, Musquin, McElrath and their factory brethren to get the latest stuff without violating the production rule. That isn’t the case this time. There’s nothing new in the frame or engine castings that would technically make them any different from the regular models, and therefore illegal. 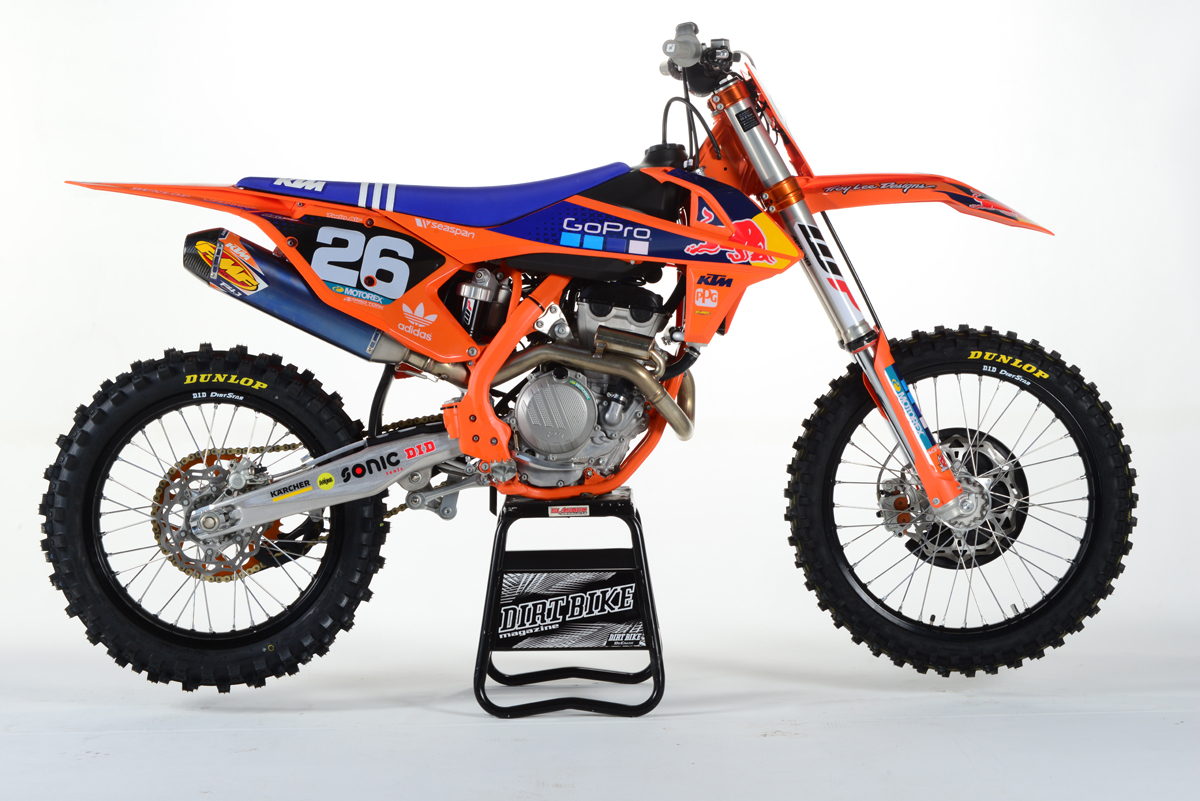 What they do offer is upgrades in the exhaust systems (FMF on the 250, Akrapovic on the 450), and a long list of cosmetic items, including the orange frame. The standard bikes won their respective shootouts earlier this year, and there’s no reason to expect anything less from these. All the same, we’ll test them against the standard KTMs and report back in the May issue. 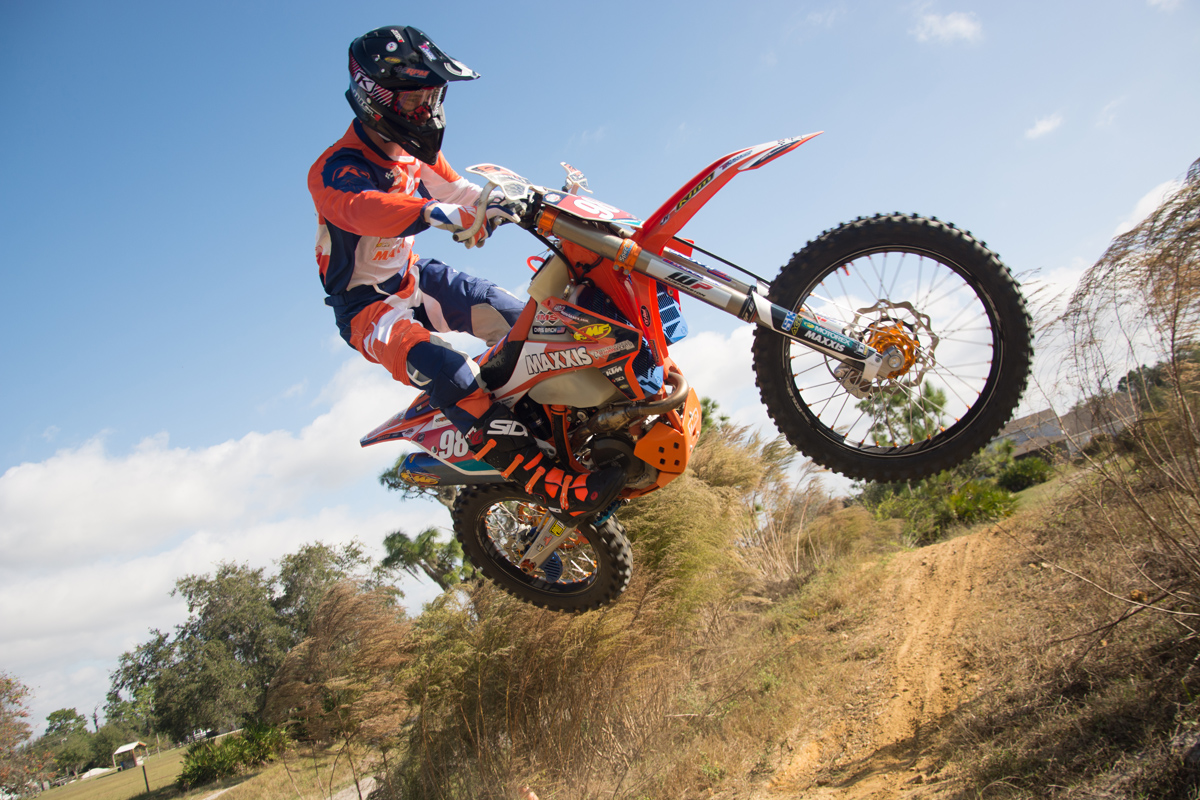 One of the most successful satellite teams in off-road racing is the Maxxis RPM team. In the past team owner Mike Hurlbert has found young talent and provided oportunites for them to make good. Riders like Cody Webb and done time with RPM in the past, and current Bi 6 Pro Champion Eric Yorba is an RPM man. Now the big news is that Chris Bach joins the team. Here’s the line up for 2017. 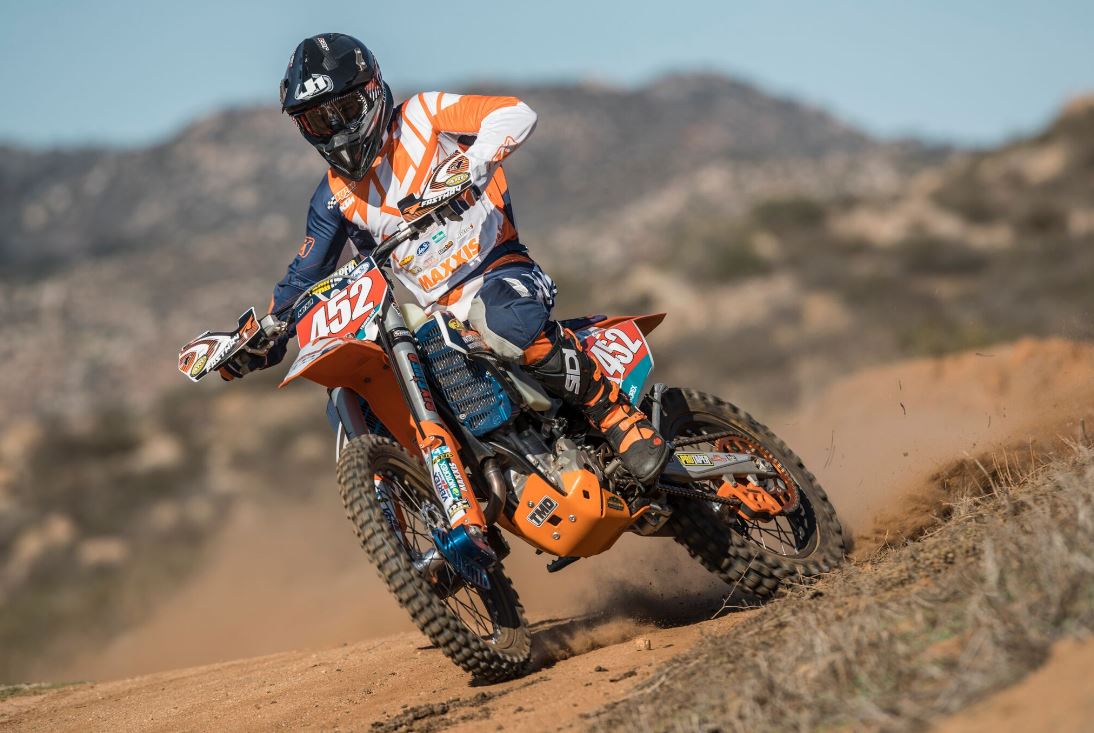 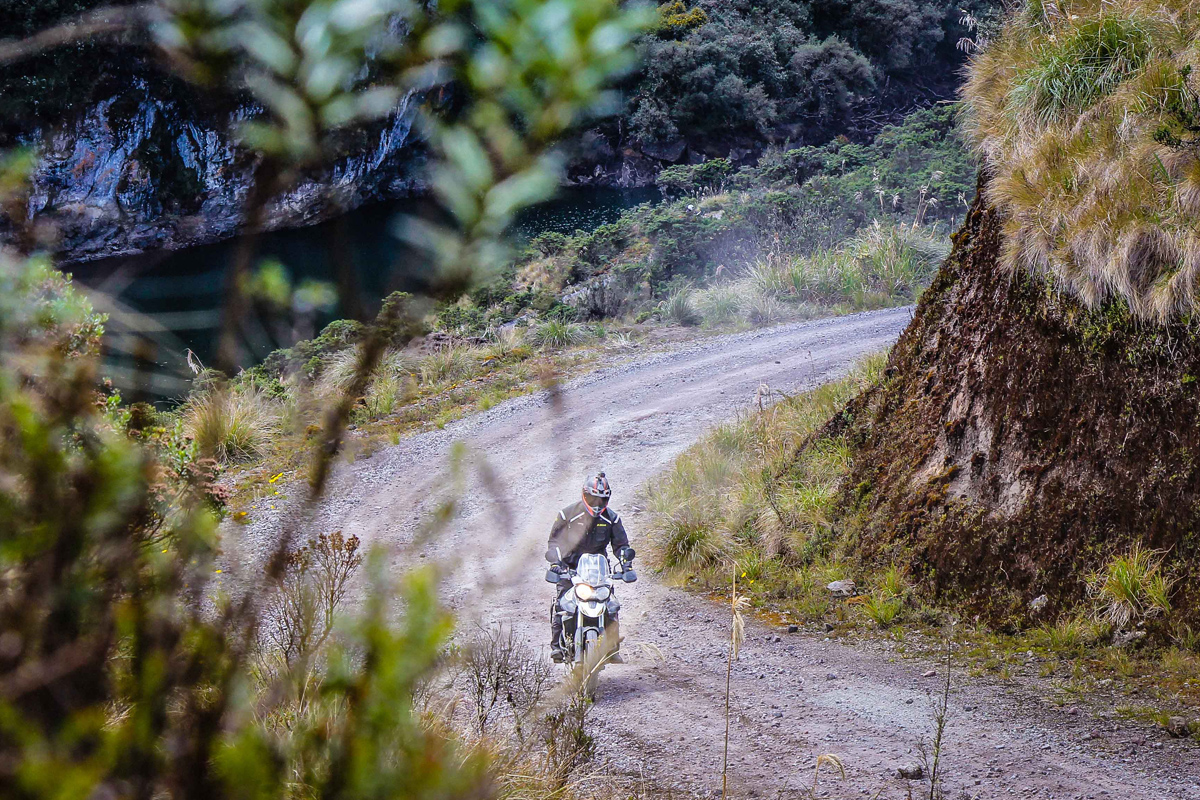 Building on over seven years of experience in organizing premium motorcycle tours, Ecuador Freedom Bike Rental announced their latest self-guided, off-road excursion called Dirt Deluxe. The new tour combines exclusive, award-winning luxury accommodations with a tantalizing unpaved route that takes riders into the more remote and obscure areas of Ecuador, giving a glimpse into ways of life that have largely disappeared.
The 6-day tour crisscrosses the northern Ecuadorian Andes, and the company’s off-road capable, adventure-ready motorcycles are the best way to dig deeper into this special region of the country. Customers are provided a pre-programmed Garmin ZUMO GPS unit and a “road book” containing detailed daily routes with genuine points of interest and culinary experiences that are not to be missed along the way. The new self-guided tour is available from May – February.  Prices start at $1915. For more
information: https://bit.ly/DirtDeluxe. For more information on bike rental: FreedomBikeRental.com 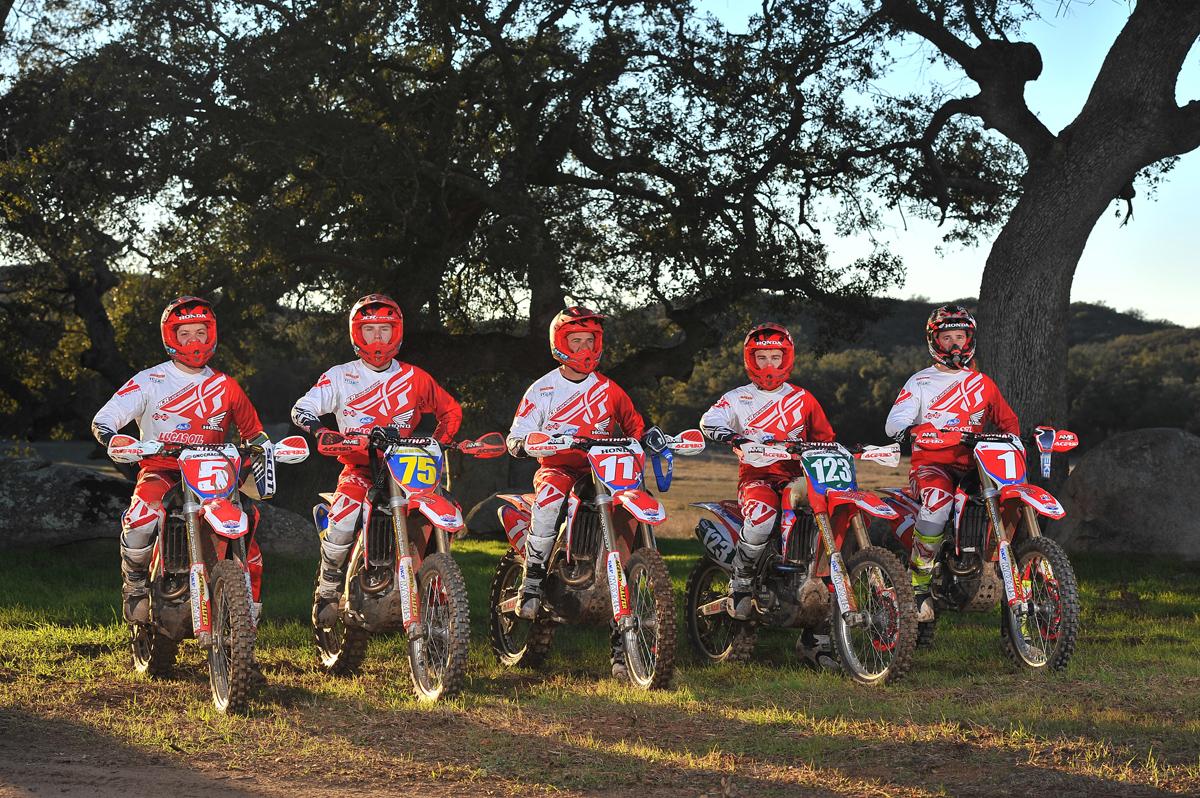 Even though the season has already started out west, the JCR Honda team is now official, and has programs on both coasts.

Trevor Bollinger #5
GNCC XC1 Pro – Honda CRF450RX
Trevor is coming off one of the most dominant XC2 pro lites seasons in GNCC history, clinching his first Professional National Championship, proving he is ready to step-up and pilot Honda’s all-new CRF450RX in the prestigious XC1 Pro class.  His patented aggressive riding style- mixed with incredible cornering speed and a move to the XC1 class is sure to bring some fireworks to the 2017 season.

Trevor Stewart #75
WORCS/WCGP Pro – Honda CRF450RX
Trevor’s flashy, aggressiveness on the bike is representative of this laid back So Cal natives approach to racing. This is also T. Stewart’s first full year moving up to the Pro class in the WORCS and WCGP series. He has a bright future and will be looking to proving himself as a frontrunner in the big bike class for 2017.

Johnny Campbell #11x
CRF450RX / CRF450X / CRF1000L
The namesake and owner/manager of the JCR/Honda team, Johnny Campbell can be found riding his 450X in Baja on the Rip to Cabo or the Baja Beach Bash, across the deserts of the west or chasing his son Preston around local tracks on his CRF450RX. You will also find him leading adventure rides like the recent NVBDR exploration aboard his CRF1000L Africa Twin. While the bikes and terrain change the smile on his face remains the same.

Austin Lee #123
GNCC XC2 Pro Lites – Honda CRF250R
Austin is another young newcomer to the JCR/Honda squad, As a highly decorated amateur in the GNCC series Austin has his focus set on climbing to the top of the XC2 Pro Lites. He is super fit and bounding with energy. Teamed with the JCR/Honda Factory Team, he has the support, speed and talent to shock the XC2 Pro class.

Ricky Brabec #1
NHHA Pro – CRF450X / CRF450RX
2-Time NHHA Champion and HRC Factory Rally racer, Ricky is now at the top of his game. His signature Hawaiian print shirt and Aloha smile give way to a ferocious competitor when the green flag drops. Racing is in Ricky’s blood, whether it’s Nat’l Hare and Hound, Baja or the Dakar Rally he is eager to take on and punish any challenger or tackle any adverse conditions he is up against.

“I love the young, aggressive energy on this Team and really excited to bring some great racing to the 2017 season. A special THANK YOU to all of our sponsors, especially American Honda, Lucas Oil Products, Maxxis, Fly Racing, Acerbis and J.L. Ray Contractors for stepping up their support for the new racing season.” –Johnny Campbell 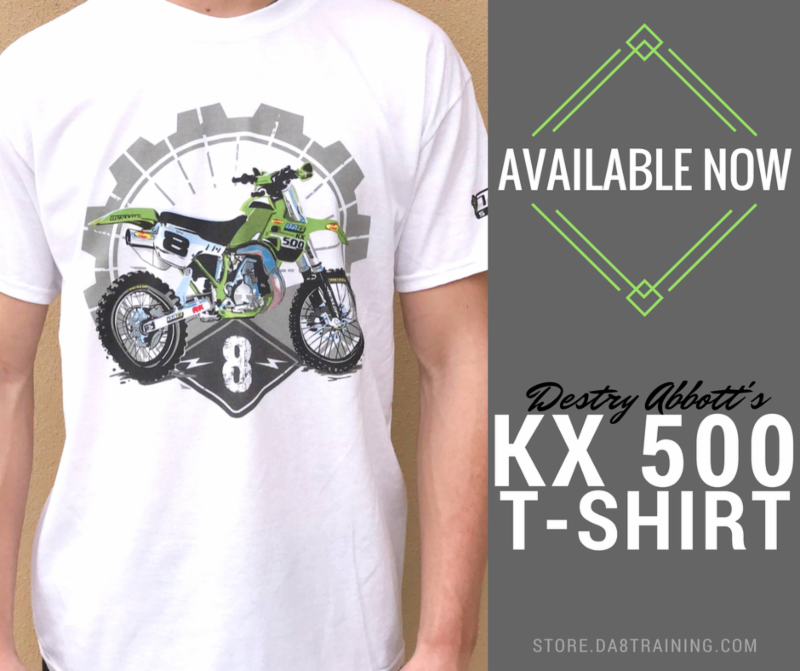 DA8 Strong is really excited to release this meaningful replica shirt!
Destry Abbott was excited to build this one of a kind DA8 KX 500! Not long after, he was diagnosed with Leukemia. With the help of Road 2 Recovery, Destry put the bike up for raffle to help with his, and his wife’s, medical funds.
Current Update:
Destry is progressively getting better and back at the races watching his son. He’s currently doing 2 years of maintenance, and getting ready to be there for his wife through her surgeries and radiation. The raffle sales from this KX 500 helped out so much and the entire Abbott family is very thankful. 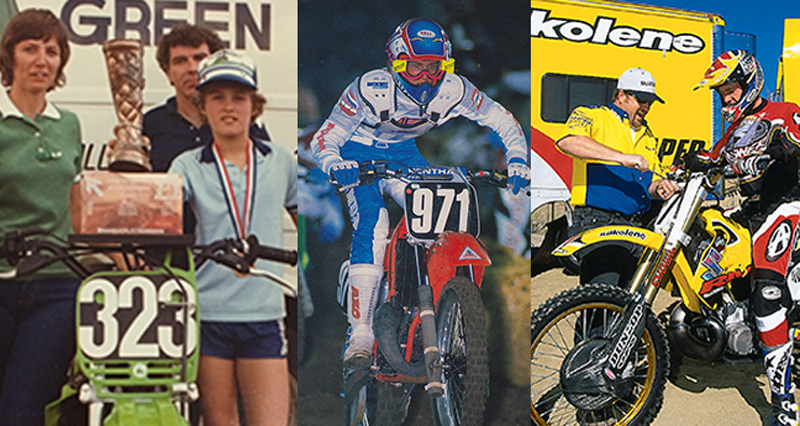 An off-road legend and a motocross icon have been honored by the Legends and Heros Tour. This week perrenial factory MX star Larry Ward will be honored at the Arlington, Texas supercross.
In the 1980s and throughout the 1990s, Larry Ward was a consistent threat for Supercross and Outdoor podiums and in 1995 he finished second overall in the AMA Supercross Championships behind the legendary Jeremy McGrath but ahead of many AMA Hall of Fame racers including Jeff Emig, Mike Kiedrowski, Doug Henry and Mike LaRocco. 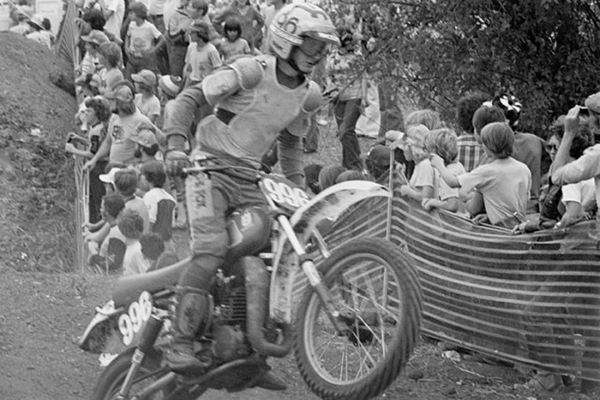 Last week at Oakland Northern California’s Charles Halcomb was give a similar honor.

Back in the 1970s and ’80s, if one were to comb through the results section of the era’s many dirt bike publications it would have been a challenge to not find a reference to  Charles.

A rider gifted with a diversity of talents, Halcomb became a mainstay in both motocross and cross-country events. Starting in 1972 Charles cut his teeth racing motocross at such legendary Nor-Cal circuits as the Watsonville Fairgrounds, Argyll MX in Dixon, Marysville’s E-Street MX and the original Hangtown circuit in Plymouth, CA. An example of Halcomb’s prowess and natural progression into the top-ranks were his sequential podium appearances at the prestigious Dirt Diggers Hangtown Sportsman events from 1972-1974.

“It’s because of people like Charles Halcomb that our sport has such a rich and interesting heritage,” said Alex Moroz, General Manager of The Legends and Heroes Tour. “His life is also solid proof that motorcycles mean many things to many people and the experiences we learn as young people influence our lives forever.”